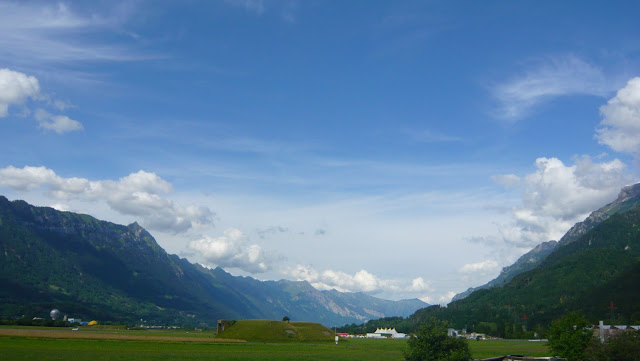 Switzerland has so much to offer, from the iconic Swiss Alps and picturesque lakes to modern financial hubs. I mostly planned it around the scenery this time.
Felt a bit of pressure organizing this trans-national trip, as I was looking after a party of 6; my dear parents and brother, auntie Betty and of course Mister.
Basel was our starting point, home to the great Roger Federer, whom had just won the French Open Championship for the first time in his career. He's peRFect. We didn’t get to see much of the city as the destination was Bern.
The Swiss transportation system rocks; the timetables were reliable, the signs were written in about 5 different languages and the trains were always on time. We bought a Swiss pass.
The train to Bern took less than 90 minutes. The sun was setting by the time we arrived. Since Bern is relatively easy to maneuver around with clearly indicated tramlines, we quickly checked into our hotel before looking for a good hearty dinner. We passed the Parliament building into Bundesplatz with a row of restaurants serving all types of cuisine.  Out of the lot, my parents picked Italian simply because the food is easier to share. Okay. 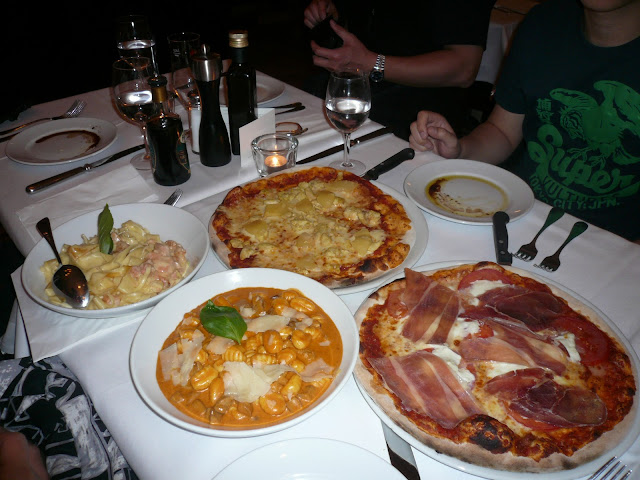 The food was delicious, albeit on the heavy side. Pizzas were loaded and crispy on the edge; portions of pasta were generous. I don’t recall the exact description of the dishes, but I do remember ordering a Carbonara, gnocchi and seafood fettucine and them being finger-licking good. And ordering food to share for 6 people becomes an art; Dad doesn’t eat fishy seafood; Bro doesn’t like deep-fried or oily dishes; Mum doesn’t like to overly meaty grub. Thankfully, Aunt and James were easy.
The hotel was leaning on the disastrous side. 3 double rooms were reserved, and I ended up with 1 triple room, 1 miniscule double room and 1 single room. Pillows were dead, duvet was meagre and the black lining of bathroom tiles was worrying. They charged 160 Euros per night per room, and I had the cheapest deal across 9 agencies. Just an idea of the Swiss living standards.
After breakfast at the hotel, we set off to explore the city on foot. As a wanderer, I just walked along Marktgasse or any of the parallel streets, and turn whichever corner seems to find something to smile at. This basically covered all the main sites. Views from the NydeggBrucke were unrealistic, and we took a break in the park overlooking the river. While I couldn’t take coffee breaks every hour, it was still leisurely, kind of. Tour guides have a hard life. 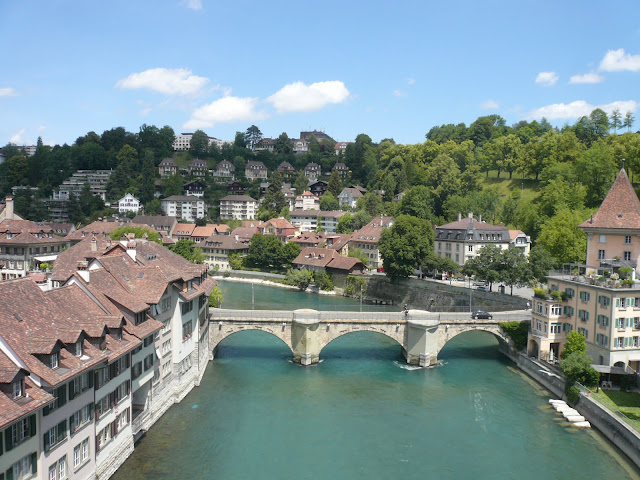 Since we were still full from breakfast, we skipped lunch and eyeballed the chocolatiers instead; chocolates were made to look like jewels, next to large slabs of chocolate blocks sold by grams. Before heading to the train station, we stocked up on snacks and one whole roast chicken for our next train journey. Yup. One whole roast chicken on a train. What have you? 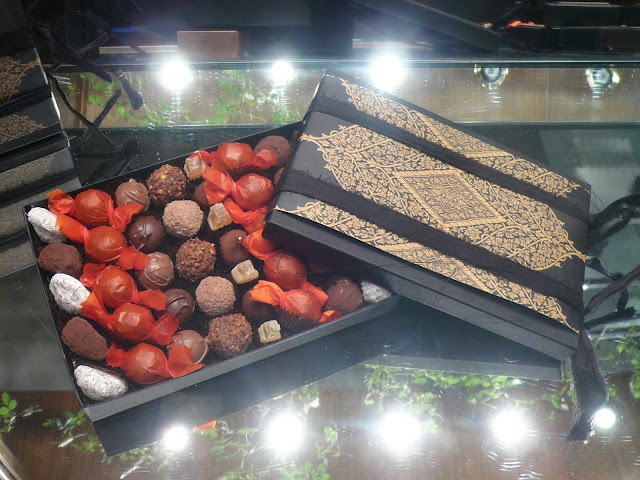 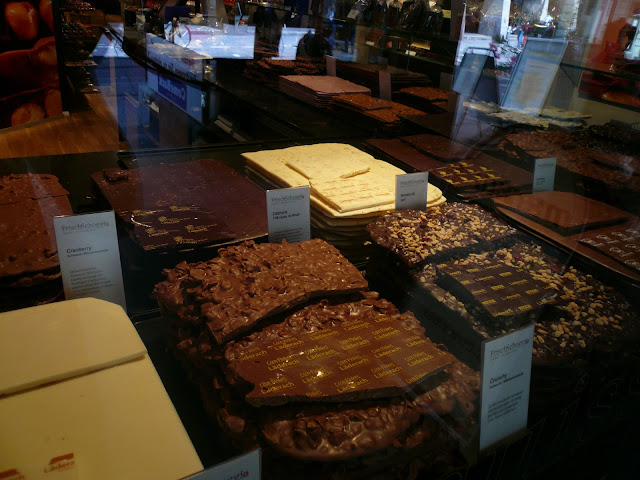 Since we booked our accommodation at Grindelwald, we only briefly stayed at Interlaken for 30 mins before changing for the train to Grindelwald. The landscape throughout the journey was incredible, endless stretches of pastoral grounds, decorated by characteristic Swiss chalets, fluffy sheeps dotted here and there and a brilliant blue sky in the backdrop. We boarded the second half of the train; the first half heads towards Lauterbrunnen. It separated at a midpoint. 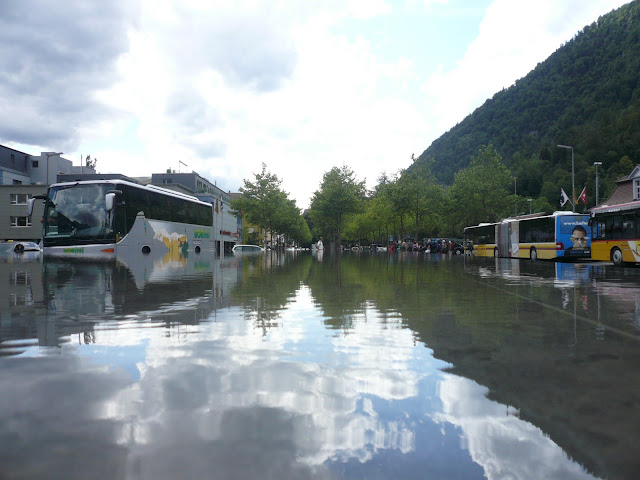 Our hotel was a chalet less than 100m from the station, Hotel Centrale. The entrance and reception desk looks slightly dated, with the red carpets and blue suede chairs. 2 of our booked rooms were in the main building, both with balconies facing a snow-capped mountain. The other room was actually an apartment in a different building. We were given a duplex on the top floor; it had a kitchenette, sofa, dining table and the bed was upstairs. The balcony boasted a stunning glacial mountain view. 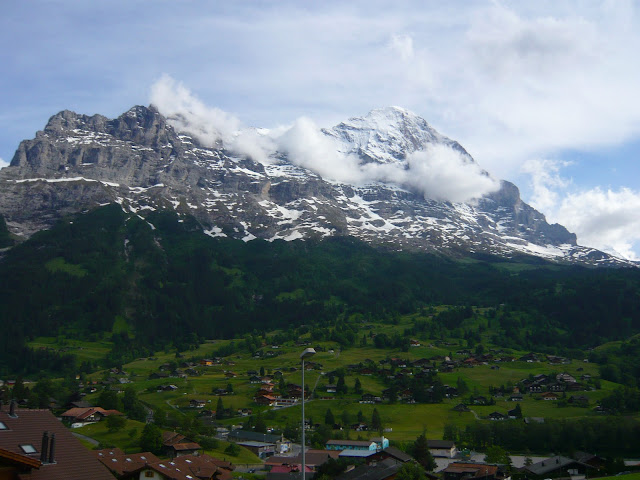 Grindelwald was a small town; except for a few souvenir shops and two supermarkets, it was mainly populated by hotels and skier accommodation. Restaurants were mostly attached to hotels, and like the rest of Switzerland, things were pricey. We made use of our kitchen by getting dinner from the supermarket; some salads, roast vegetable, chicken and swiss sausages. 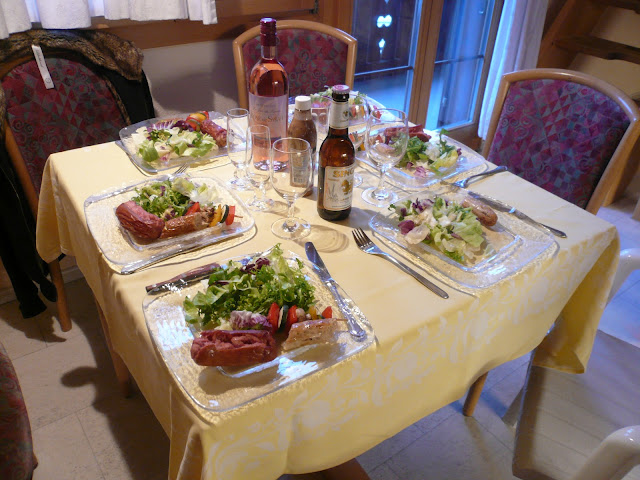 There was a bus terminal opposite our hotel, one of which took us to Oberer Gletscher. It was only a 15-min short ride, followed by a 15-minute hike to the Oberer Gletscher entrance. Our heart sank when we arrived. The ticket booth was closed. What? It was half 9! We lingered and looked up the rickety wooden 984 steps. Just as we were about to leave, a hiker walking a dog opened up the booth. Flexible working hours, eh? 6 SFr each.
The climb was never-ending. Each step opened up a wider view of the panorama. The ‘stairs’ were made of planks of irregular wood, with the width of half of my shoe. By the way, I am a size 3 (Eur 36). I was more worried about the way down… It must have been a good 40 minutes before we reached the top. Then my heart sank again. The tip of the Oberer Gletscher glacier was supposed to have reached the lowest point compared to other glaciers in Switzerland. Thanks to global warming. I have heard of the retreating glacier, but I didn’t know it was that bad. With the furthest zoom of the camera, we could see a teeny weeny bit of it. 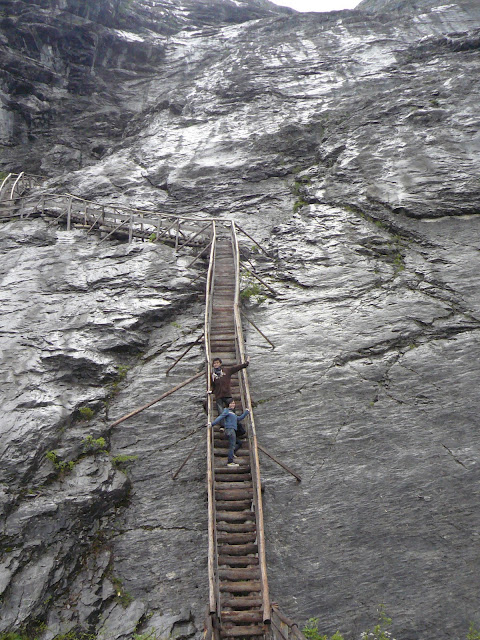 A bridge (width of a size 18 lady) was hanging above the melted glacial waters. 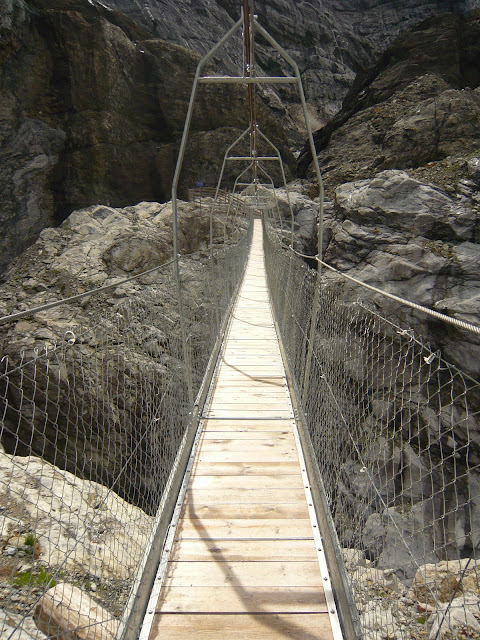 Despite the non-existent glacier, it was quite an experience. I do however regret forgoing Kleine Scheidegg for this. 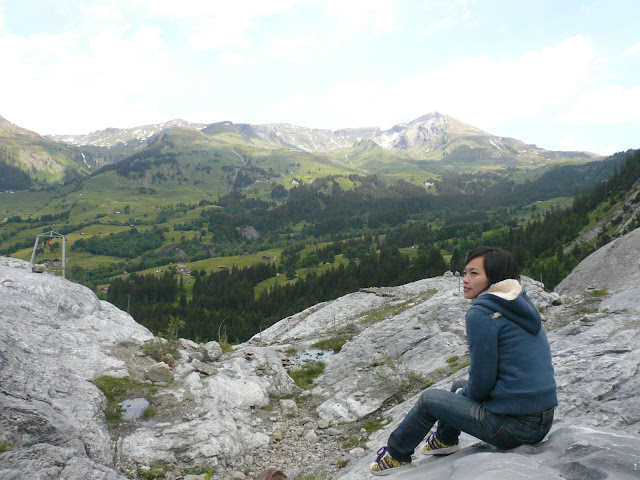 After a short break back in the hotel, we set off for a boat tour on Brienzersee from Interlaken to Brienz. The undisturbed turquoise water was mirroring the mountain ranges and gathering clouds. Neat settlements, Barbie-house-type buildings and miniature castles along the way. 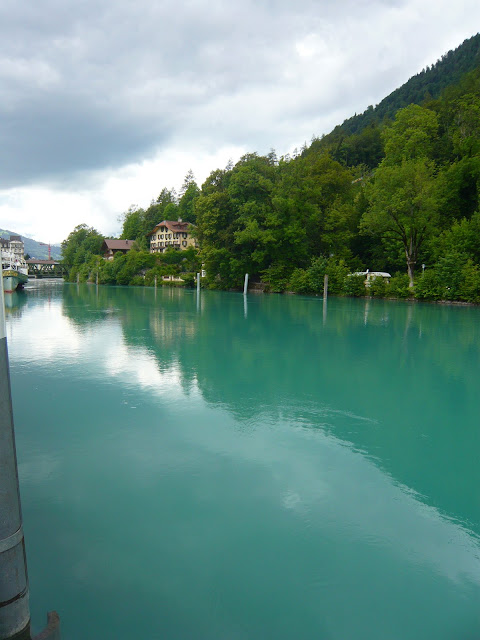 Seeing we still had a few hours before nightfall, we decided to take the train to Lauterbrunnen from Brienz. Everything was perfectly timed. Waiting time between train arrival and boat departure was approx 10 mins; between boat arrival and train departure from Brienz was no more than 15 minutes. 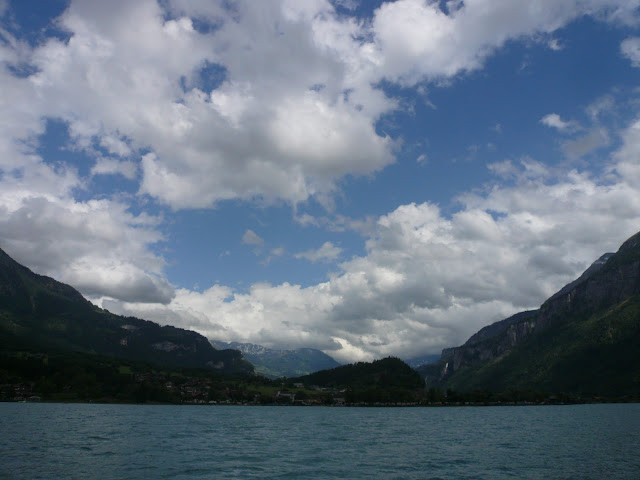 Lauterbrunnen is smaller than Grindelwald. In my humble and biased opinion, Grindelwald offered better views and was generally a more charming little town, but obviously we didn’t trudge onto the Lauterbrunnen Valley. The Staubbach Fall could be spotted from the train station. Forgive me; it does look rather like the mountain was pissing onto the houses. It was quite a pathetic fall, though characteristic compared to the more overpowering ones around the world. 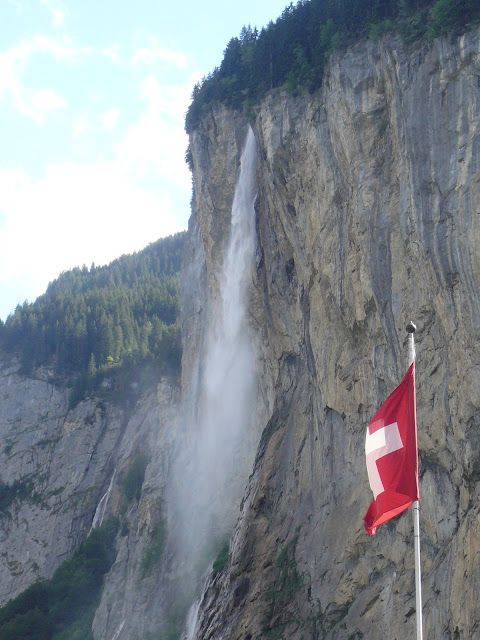 After another night in Grindelwald, Lucerne was our next stop. The original plan was to catch the Golden Pass Panorama train but timing wasn’t right. Not that the views on the national trains weren’t good enough anyway. It was the longest train journey yet, 2.5 hours.
Lucerne was much warmer with cloudless skies. I could finally loose my fur-lined jacket; it was June for crying out loud.
I must say very little has changed since our previous visit in 1997. Crossing the bridge from the station, it was the same tree-lined, swan-filled lake (from which one can see Mount Pilatus); busy traffic intertwined with tram lines around the lake; towering block from which my father bought his two Rolexes 9 years ago (only to find there were better deals in HK later). We had a tight schedule. After checking into the NH Hotel, we packed our gear for Engelberg to see Mount Titus.
It took less than an hour by train; careful with which carriage takes you to there though. Engelberg was another pretty little town. We bought the tickets for the cable car and world’s first revolving cable car. We didn’t need much directions, as Mount Titus could be seen from a distance, we just had to walk towards it.
6 of us in the cable car, the views changed from extended greenland to snow covered rocks. Then we were crammed into the revolving cable car, where we put on our downs jacket, except for Dad, whom believed we were overdressed. 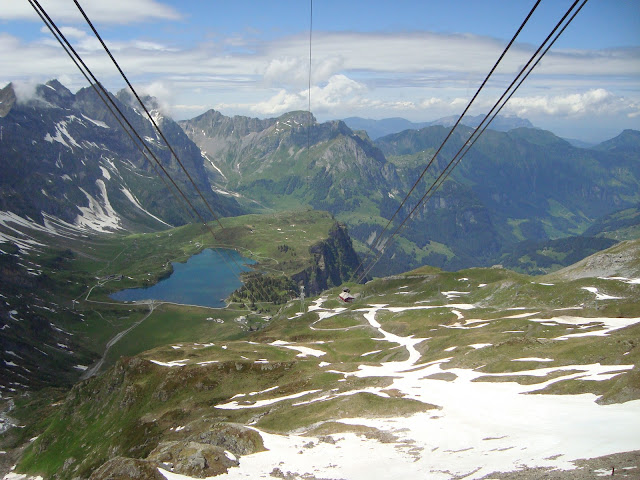 Temperature dropped into the negatives as soon as we got out. Dad was scrambling for his jacket, gloves, hat and everything else that could cover his skin. As most of us had been before, my brother was most excited; Mount Titus popped his cherry for the first snowball fight. There was an ice cave in the main complex and a snow carrier took us to another part of the mountain, where sledging and float slides were free for use. Awesome fun. Made even better as only few people were there. 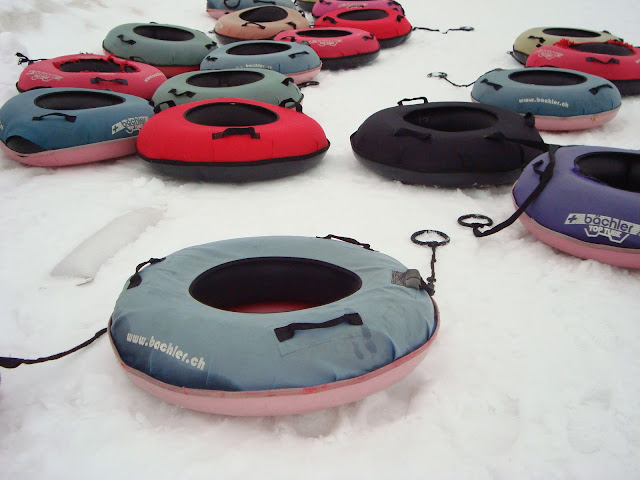 I think my Bro got a little carried away. He leapt onto me from behind as a sneaky attack, knocking me off balance and hit my head against the snow. Didn’t quite knock me out completely, but it wasn’t far.
Timing wasn’t so great this time, we had half an hour to kill in Engelberg before the train took us back to Lucerne. Dad and I found a supermarket and bought some snacks. No chicken this time. It was a quiet journey back, we were all asleep.
The sky was still bright when we got back, we meandered through the streets, and we arrived at the oldest wooden bridge in Europe, Chapel Bridge. We preferred an outdoor table of a restaurant beside the river, and finally got to taste some authentic Swiss cuisine. As per usual, we ordered platefuls to share; 2 cheese fondues, swiss sausage, pork escalope, linguine cooked in creamy sauce with strips of veal. Although none of the dishes were outstanding, but it was fair. Switzerland is not prominent for its culinary inventions anyhow. 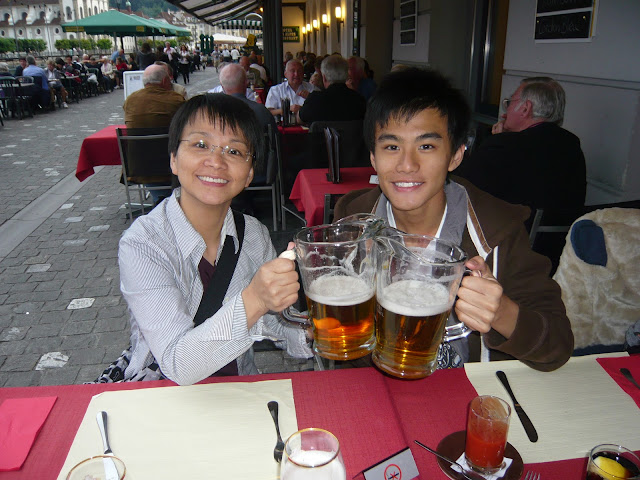 We strolled on the Chapel Bridge at night before heading back to the hotel. 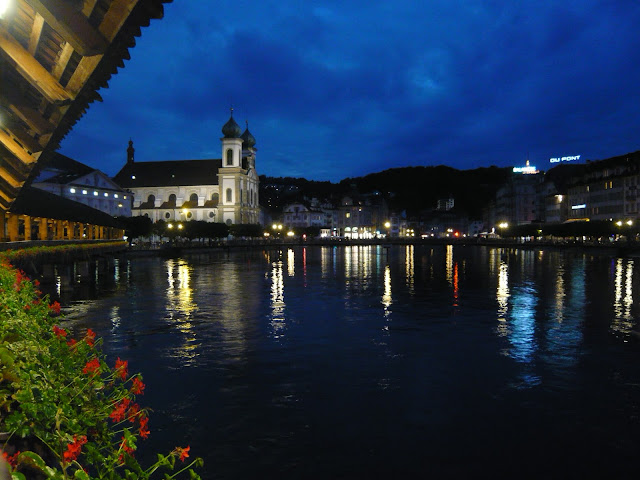 Before getting the train to Zurich, we spent half a day roaming around Lucerne; touring the city wall to overlook the entire city; marvelled at the ridicule of the prices in the shops; soaked in the sunshine. Though cliché, we paid a quick visit to the (dying) Lion Monument before boarding the double-decked train to Zurich.
Like Basel, Zurich was merely an airport hub for us, so we didn’t get to see much. The atmosphere was undoubtedly a stark contrast to the peacefulness we enjoyed in the last few days. There were people flooding the streets facing the train station, all busily brushing past one another. Reminds of me London. Shopping was an unlikely event given the dear price tags, so we late-lunched. 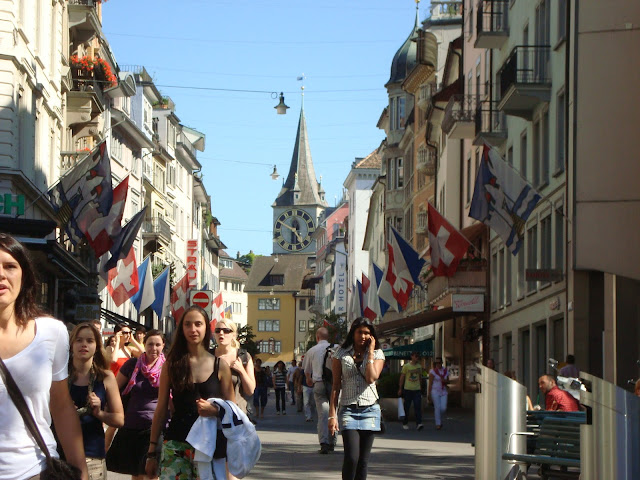 It was only a tiny bit of what this country has to offer. I will return with a fatter wallet to do the all-day trekking and cross-country skiing with a lower maintenance group. Don't think my parents ever got used to my aimless wanders around the cities/town, then doing ten coffee breaks per day. They're still very much accustomed to the tick-box sight-seeing exercise.
at 15:12