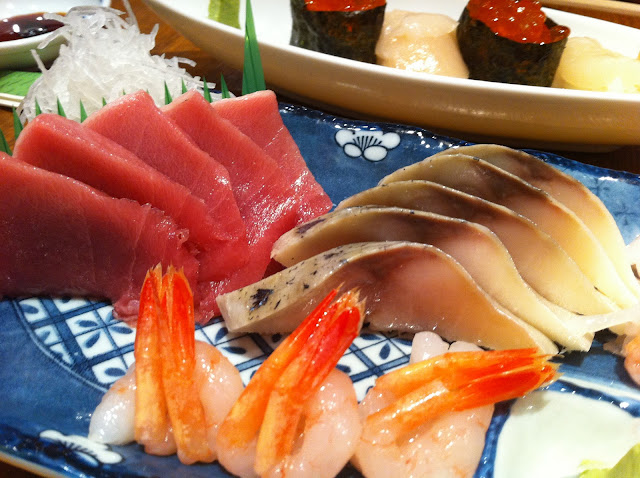 As I was looking up the phone number to reserve a table at Swiss Cottage, I came across the Hendon Central branch menu. To my delight, while the menu looked 90% similar, sashimi was c.18-30% cheaper than Swiss Cottage. Why? Does this suggest Atari-ya is an honest restaurateur, who maintains a fixed profit margin across all locations? Or will we be compromising on quality?
The interior follows a similar theme to the Swiss Cottage branch, if not plainer, and a sushi bar to watch the itamae at work. This time we mostly stuck to fish.
O-Toro - fattiest tuna £9.80 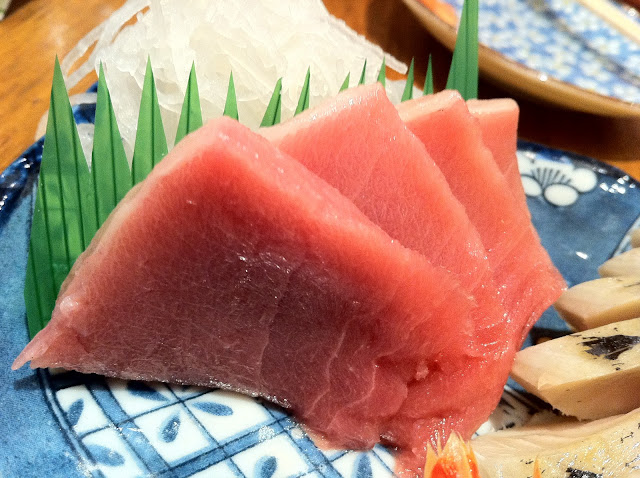 Expectation can be a total killer. Remember the solid chunk of marbling tuna? No more. The fish was still glowing pink, but the fat was gone, and so was the melting effect. It was a greasy slice of tuna, and I wouldn’t complain in any other restaurants, but I had expectations with this brand. Grr….
Ikura Gunkan & Hotate Nigiri 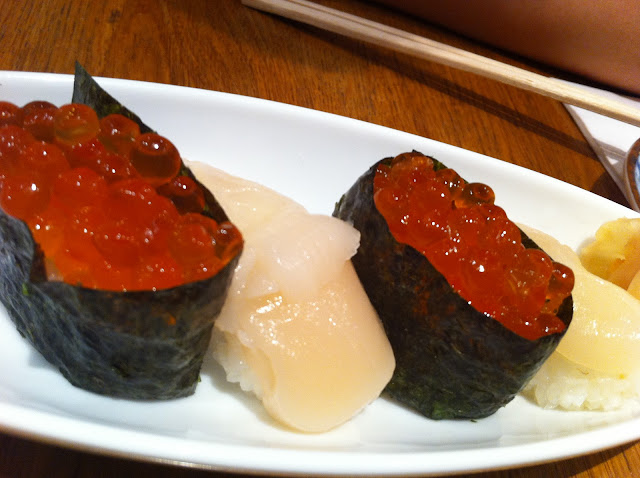 To avoid citrus scallops, we ordered hotate nigiri this time. Much better. Still didn’t take my breath away; the sushi rice could do with more integrity; crispy seaweed on gunkan is always appreciated. This one was a bit flat and damp.
Agedashi Tofu 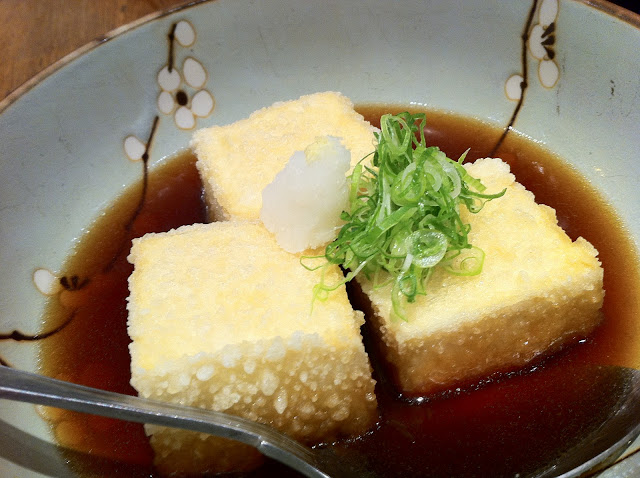 This chef is clearly better at deep-frying than the one in Swiss Cottage, as one can tell from the photo. Usually silky soft tofu loses the aroma of soya, because the high water content dilutes it. This was strong in flavour, compromising on texture, but only ever so slightly.
Grilled Salmon belly with chilly Cooked dishes here are delightful. The Salmon skin was grilled to golden and it was one fat fish. Awesome.
Shima Saba 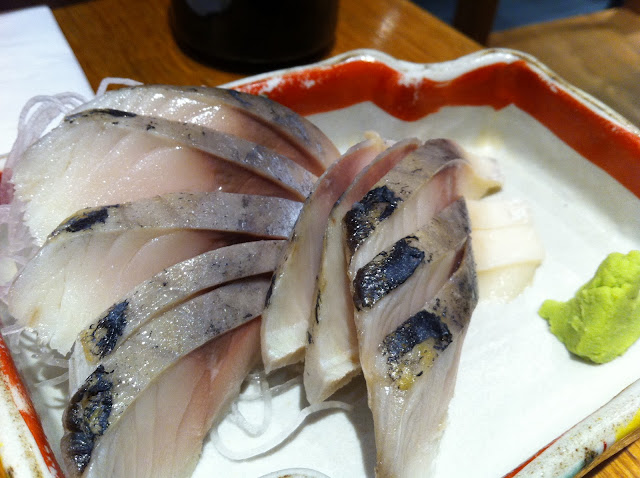 This was so good we ordered another portion. Perhaps the itamae was distracted, we were served double. No complaints.
I ordered black cod again. It was the exact same story as last time, so I won’t reiterate.
There was a little episode that evening regarding black cod. A lady, dining on her own, upon entering the restaurant caught sight of our black cod being served. There were 2 fillets. She asked the waitress for the same thing and was served 1 fillet, which was the tail section with more skin (and fattier) but larger. She was very upset and decided to complain about it half way through the dish. The chef and itamae wouldn’t accept it, even showed her how the portions were divided and wrapped individually. To add fuel to the flames, the couple next door was also served 2 fillets. She was hysterical, forcing her way into the kitchen and demanding a second fillet. The episode ended with the itamae confiscating the dish from her, cancelled her takeaway order (which was another black cod that she commanded for 2 fillets), but still charged her.
From where I was sitting, our portion did look slightly bigger. I admired the fortitude and insistence of Japanese chefs. Others would have given her an extra bit of fish to avoid the scene, which was quite disruptive. 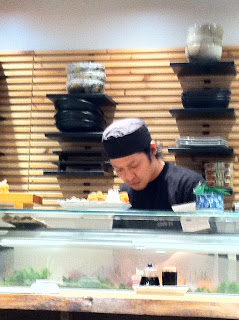 The hot dishes were good, but I came for the sushi. I won't be making the trek again to this branch. Things are cheaper here for a reason.
Small note, I would avoid the sushi bar branch at St. James Street.
Atari-ya Hendon
31 Vivian Avenue, Hendon
London
NW4 3UX
Tel: 0208 202 2789
at 16:43 No comments:

No Sound of Music; but a German Soft-Spot 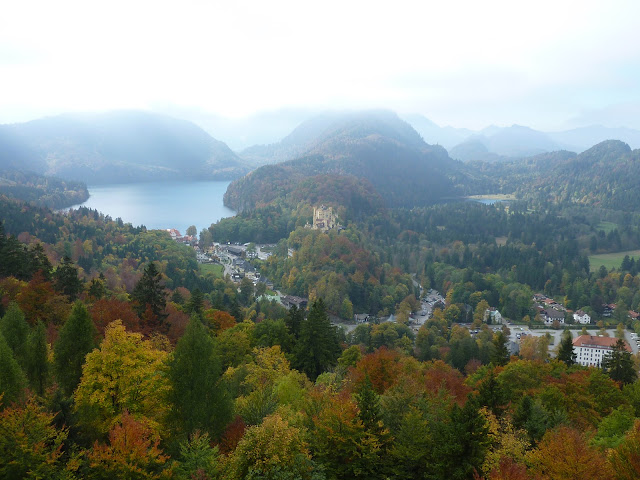 Another ridiculously early flight that brought us to Salzburg.
This is my second time to city; one that was dubbed the most beautiful and scenic city in Europe. I didn’t agree when I visited 5 years ago, probably due to the pouring rain, but I only planned to stay here for half a day before taking the train to Munich.
This time was sadly no different. Despite the warm sun and refreshing breeze, it was still a city of nothingness.  We did the usual Mozart birthplace, his house, the castle, the street markets, even took a suburban bus to where the Sound of Music was filmed. 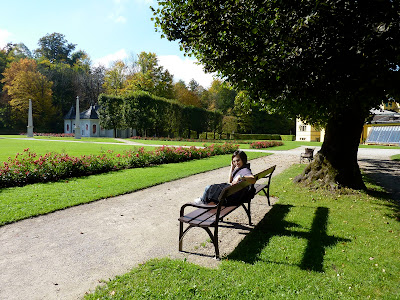 So it wasn’t long before we decided to head to the Central station, where we hop onto a train for Munich. Nevermind what the train timetable says, our next train is apparently 90 mins away, what happened to trains depart on an hourly basis?
We found a small shopping mall nearby, with a homeware shop. This is the first time in 5 hours we liked this city – we found pretty espresso/saucer sets for 25 cents! And artistic coffee mugs for 75 cents.  Asians like shopping, it’s in the blood.
The train journey was pleasant enough, we took a whole cabin to ourselves.
Munich’s weather was unfortunately less welcoming. Grey skies with spits of rain.  Our hotel was on the edge of the centre in a more residential region, tranquil but only 2 mins to the metro. It’s been a long day. we all deserve a nice nap before hunting for dinner. 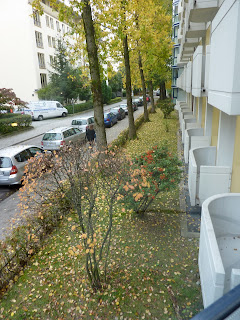 Oops. It was almost 10pm by the time we woke. Though none of us were hungry, it felt somewhat inadequate if we skipped dinner altogether. Problem with a residential area is the lack choices for quick bites.  We located a main street after 10 minutes of walking, but options were limited to chained fastfoods and cold pizzas… hmm… we settled for a couple of submarines.
We began to explore Munich the next day. The new city hall was impressive albeit typical. The pink flowers were a nice touch. As the clock stroke noon, the crowd gathered in anticipation for the a puppet show, which started at about ten past. 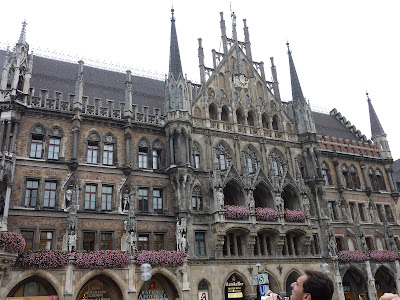 Past St. Peters, the famous Viktualienmarkt was where we lunched with local delicacies. The roast pork sandwich was out of this world; crispy crackling with a melt-in-mouth layer of fat underneath followed by tender meat that shredded with every bite. It was a small sandwich for 4 Euros, quite steep. The pork knuckle was disappointing, bland with rock-hard skin. Bratswurst was ordinary. All washed down with a pint of German beer. Satisfying. 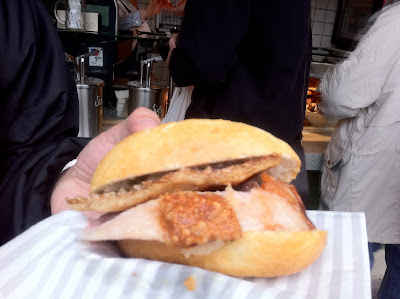 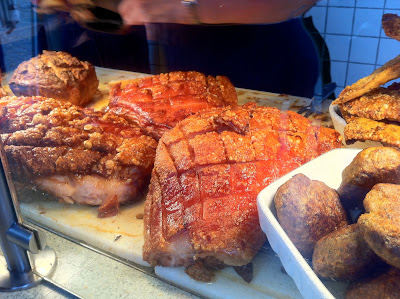 We also came across a stall that specialised in soups, which were apparently highly recommended by the Japanese tourists. It was jam-packed with Asians tucking into their large bowls. Another 4 Euros. It was just clear broth with cubes with tasteless chicken breast and bean sprouts. Was it the chilly weather? Or the Japanese writing that attracted the crowd?
The local farmers produce and handcrafts were great, especially the Christmas decorations. 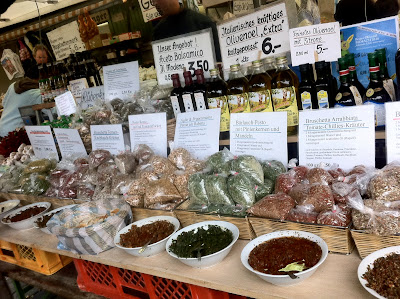 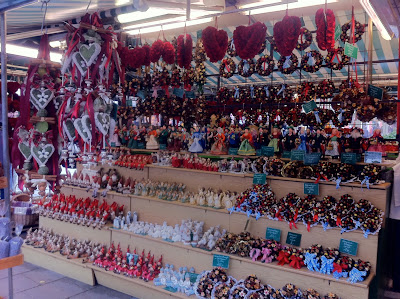 We followed the main street with the major shops and department stores, then diverted into a small road next to the National theatre for the historical Hofbrauhaus royal beer hall. With a full stomach, we only took a peek, where there was a live band and huge trays of food were being delivered. Atmosphere was buzzing. 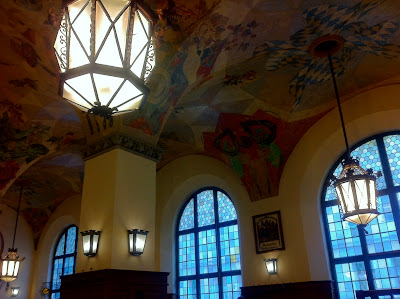 A row of souvenir shops lined the street that led us back to the main road, where the metro subway housed various shops and eateries. Coffee time.
Followed by a bit of shopping. 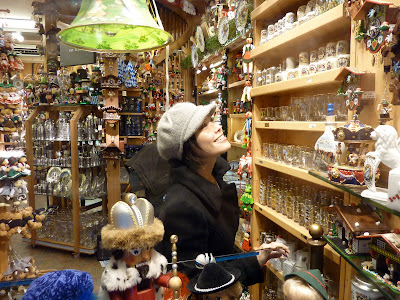 We popped down the central station to buy tickets and check the timetable to Fussen the following day. Staff was exceptional; kindly explained to us the Bavarian pass that granted us unlimited transport for 24 hours.
It was our last day. Trip the fairytale Neuschwanstein. The first part of the journey was 40 minutes on a train that was quite shabby with frayed seats and poor ventilation. The second part train was equally shabby in a different way for the remaining 75 minutes. Then there were two buses (73 or 78) just outside Fussen train station that took us to the castles. The buses were crowded as most people had the same destination, and duration was about 20 mins. 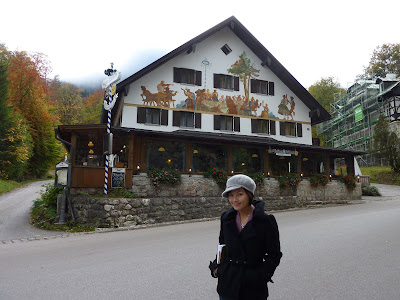 Tickets for the castles had to be purchased at the foot of the mountain, and the ticket office listed the times for tours in different languages. Make sure you leave at least half an hour for the journey to the castle entrance. Interestingly, it took the same time to queue for the bus as walking up. The gentle trek was easy enough; and autumn was totally the best time. The leaves were beautiful, turning into amber and mellow shades of crimson. 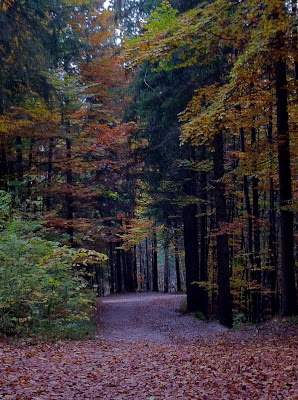 The castle was magnificent. The fog added a touch of surrealism to it.
The interior of the castle was somewhat less spectacular, since the king was thrown off the throne before it was completed. It lacked the usual gold lining and jewels of an accomplished royal residence, but the gem was the views from balcony overlooking the landscape.  With the guided tour, the experience was quite rushed. I would have taken more time to admire the wood sculptures in the king’s chamber, which was 4 years worth of work.
Another 10 minutes walk from the castle took us to Mary’s bridge, which offered the panoramic view of the building. 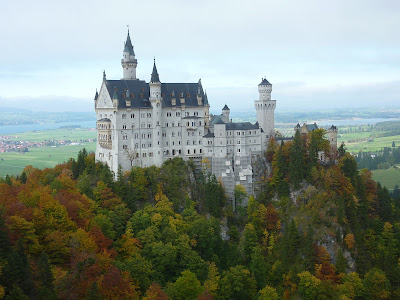 Just past 5, we made our way back to Munich to catch our flight. Had just enough time for some German sausages and specialities in the station before taking the intercity overground railways to the airport. 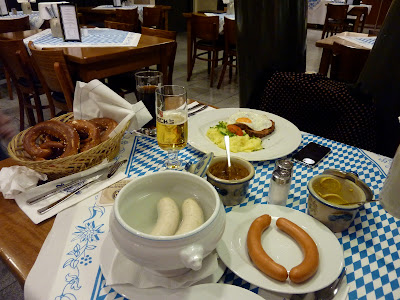 While most people would agree that Munich is the place to go if you could only visit one German city, I am not too sure. Maybe it was too similar to Vienna, Prague and Budapest. Nothing particularly stands out except for the higher standard of living. However Fussen was a different story. I loved the scenery, the pastel buildings and the simplicity of it all.
I would come back. In summer time. For the Romantic Road. Hopefully with my brother some time in the future. 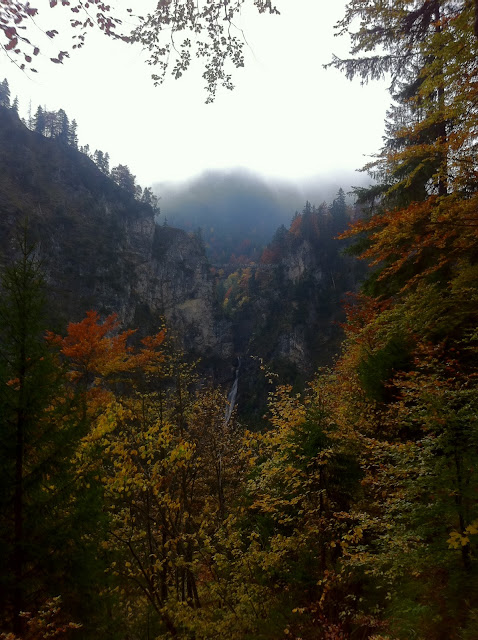