Frozen Toes in Stockholm - Sweden I 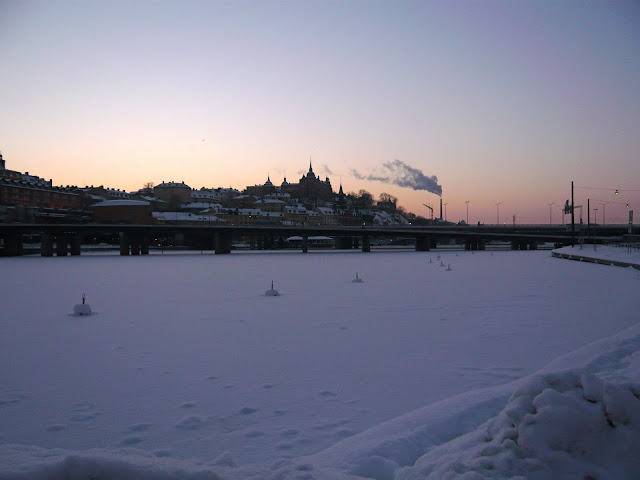 No Christmas is more authentic than a Scandinavian one.
Tracing back 6 months, when I was being cooked alive in my London apartment on an exceptionally hot summer day, I suggested an Arctic expedition to see the Northern Lights during the festive holidays. Since Sherwin had recently moved to Stockholm, it would be nice to save him from a lonely Christmas (not to mention his wealth of backpacking experience). I duly booked my flight to Skavsta Stockholm 6 months in advance, and responsibly left him to organise accommodation, husky dog sledding and the itinerary.
London had been hit badly by snow blizzards the weeks before I fly. While it had taken Stockholm to defrost runways in 2 hours, it took London 2 days (then again BAA was managed by the Spaniards). Thankfully my flight wasn’t affected and I landed at 11am. It was a dingy airport with 6 departure gates, so by 11:15 I was already buying my coach ticket (119 SEK oneway for youth) to Centrale Station. The coach journey was 1hr40m, made more bearable by free wifi-access, sights of unscathed blankets of snow and a Kiwi beside me. The Kiwi was Caro, who worked in Shanghai but came from a NZ background with a boyfriend working in London. Talk about internationality, eh? Her first-hand Shanghai Expo encounter was worthy of a new post on its own. 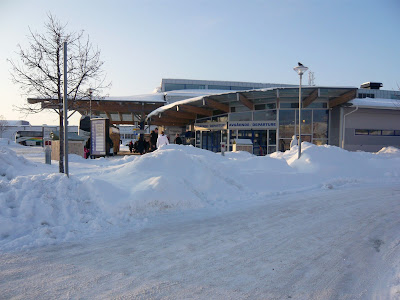 I stored my holdall travel bag in the bus terminal lockers, and contemplated the idea of putting my thick socks and snow boots on. Looked around. Everyone else was wearing normal trainers and gloves, let’s blend and merge.
I bought a 24-hour pass (100SEK) that grants access on all transports, as opposed to the 30SEK singles. Temperature was -16˚C. Yup you read it right, minus sixteen degrees Celsius. Gamla Stan is one of the 14 islands that constitutes Stockholm, also termed the Old Town. It houses a number of the major sights: Nobel Museum, Royal Palace, Stockholm Cathedral and also the oldest and most traditional Christmas market.
Waters surrounding the island was frozen, snowed on and stiff as rock. I am still unsure as to whether it was a lake, river or the Baltic Sea, so I’m keeping to ‘waters’. I was thrilled by the thigh-high snow everywhere. How did I know it was thigh-high? Because I made the mistake of walking in it, soaking my jeans and trainers. As I rambled around the periphery of the island, (my fingers and toes lost all senses) I came to the largest Christmas tree in the country. Unbeatable in terms of size okay, but I wish they would make more of an effort with the decoration. 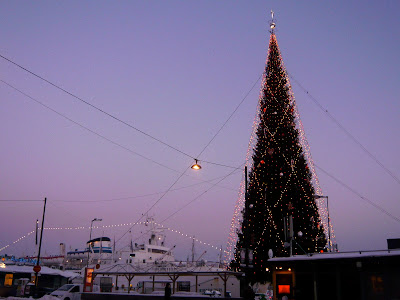 It was nearing 4pm as night falls. I wandered along the Royal Palace and into the heart of the Old Town in search of the Christmas market. Come on toes, wake up, don’t give up on me now. The market was disappointingly small in front of the Nobel Museum. I never intended to pay the Nobel Museum a visit. Sure it will be impressive inside, but surely there is nothing I can’t read up on wikipedia about Nobel prize winners, unless they all sit in there and greet me. The red little stalls were selling typical handmade candles,Christmas decorations, candies, cured meat and sausages and the inevitable glogg (mulled wine). Festive. 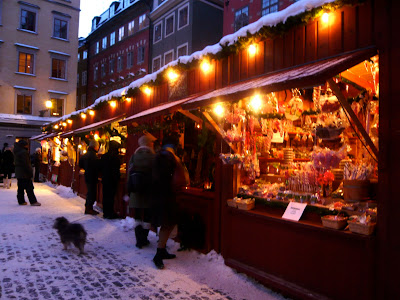 Clearly leather gloves weren’t designed for this temperature, and wet trainers are BAD in winter, despite the socks and 2 layers of leggings. I took refuge in a popular café at the corner of the square. It had a load of writings on the wall in Swedish. Hmm… I asked for a hot chocolate and a little ham bun to keep my energy level up. 75 SEK. I saw others having steaming hot soup … I wish I knew they had soup. 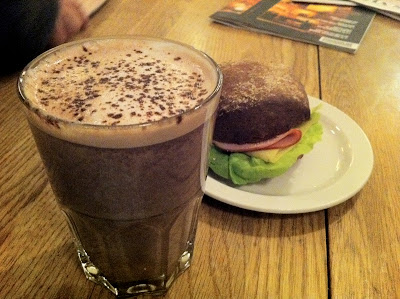 It was a good half hour before my toes regained consciousness. Sherwin called to say he’d almost finish work and would join me in about one and a half hours. I had yet to shop for postcards and souvenirs! It took a while to locate Vasterlanggatan, because the lonely planet app was not very good at locating me. The street was lined with crafts and souvenir shops. I had my first bottom-first slip; luckily with the heavy padding, the damage was minimised.
Despite the heart-aching price tags, I bought a few things to remember this city. Temperature dropped further after dark, so I sought shelter in another café waiting for Sherwin, not without slipping on the frozen pavement a few more times. Should I have crawled instead?
Sherwin found my hiding place in spite of my poor description of “the café with many stars hanging on the window”. Every café had stars hanging on the window. Good to see him keeping well. He also pointed out that people wearing ‘normal’ gear were not exposed to outdoor temperature for more than 15 mins; I was walking outdoor for almost 4 hours. So when we returned to the Central station to pick up my holdall, I promptly changed into my snow boots and ski gloves. We walked towards the shopping area next to the station to decide on a spot for dinner.
Sherwin rarely ate out, because he was catered for by his host.  However there was a Chinese buffet that he walked past often but lacked a company to eat with. I gladly complied. The food wasn’t bad; it had classic sushi and miso soup, satay skewers and the usual chicken, fish, prawns and beef dishes for 158 SEK per person. Freshly made banana fritters served with ice cream too for dessert. Fed and knackered, we made our way home. We went the long way so I could walk across the frozen waters. Honestly I was petrified because judging from the lack of footprints and the number of exclamation marks on the warning signs, no one walked on it. I pathetically took 3 steps from the shore… Sherwin started jumping on the edge and declared “I can see weakness on the surface.” I leapt back like a petrified rabbit. 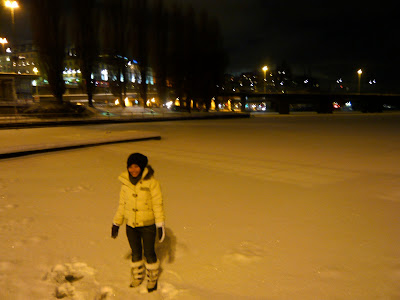 I would have continued sleeping if Sherwin didn’t call me a fat turtle and said it was sunset soon. We had gravalax and scrambled eggs with breaksticks (because he ran out of bread) plus msg coffee for breakfast before setting off to the island next door. He was a wanderer too, and we ended up walking behind the Nordic Museum and Vasa Museum, through a deserted wonderland to get to the open-air museum, Skansen. 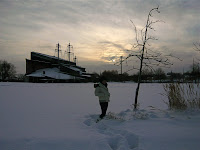 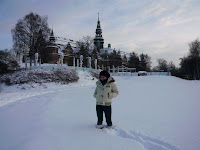 We lunched at a café first, where I was charge 90SEK for a croque-monsieur. It was an open one stacked with cheese and ham, though. 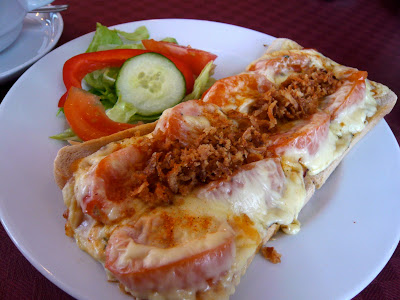 The Christmas market inside Skansen was closed but we went in anyway, for a surprisingly friendly price of 70SEK. Due to the snow, we were almost the only visitors, so falling down the icy stairs wasn’t embarrassing at all. The ‘summer rose garden’ (not so summery now) offered views overlooking the frozen city. We trekked around the various cottages and Scandinavian animal farms. 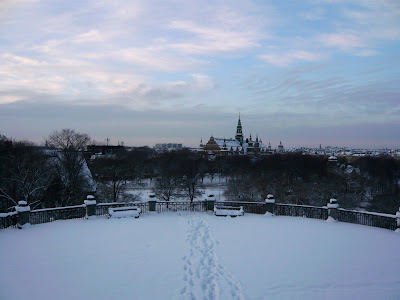 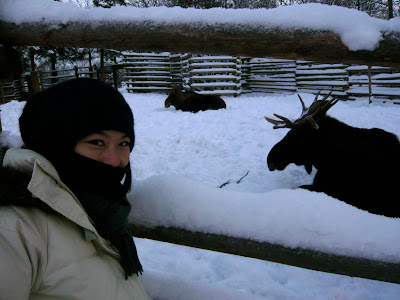 My exit was dramatic. We picked an exit on the hill top with a long winding path that leads to the tram stop. Instead of following the path like all civilised tourists, we cut across the, again, upper-thigh-high snow. The risk is, of course, in estimating the underlying land profile. Needless to say, I tripped on a buried fence and fell star-shaped, flat on my face…why do I always learn my lessons the hard way.
We hurried home to buy food for the train journey and pack our gear to catch the 6pm train for Kiruna.
Travellers were flooding at the gates of the Central Station. With the heavy snowfall across Scandinavia in the last few weeks, regional trains were delayed and cancelled, leaving many stranded. Our train followed the same fate. It was delayed until 7 the information board displayed. I can donate an hour of patience. Nightmare began as our train didn’t turn up at the platform at 7 and it simply disappeared from the information board. The queue for the information office would take 2 hours; I didn’t dare to leave the platform in case the train sneaked in. Emotions evolved from confusion, to despair and finally defeated. 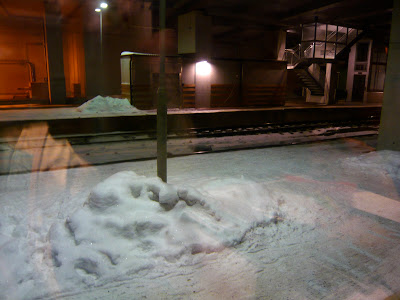 9:30pm – our train mysteriously popped up on the information board again.
We were allocated the last carriage, sharing a cabin with a family of 3 and lone traveller. Sherwin cunningly reserved the top bunks, so at least our beds were least abused.
at 10:44