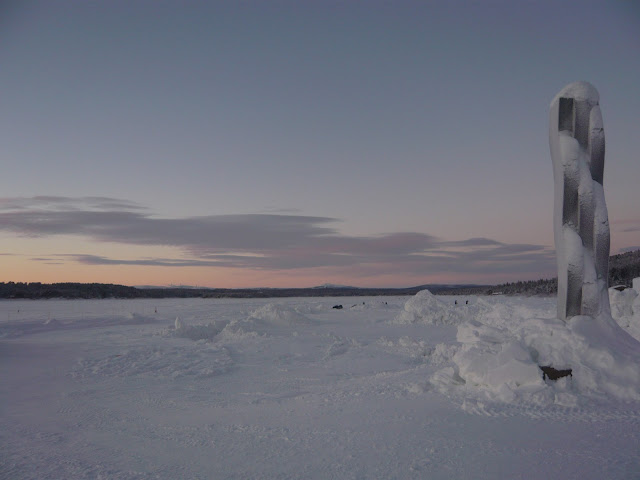 The 17-hour train ride began around 10pm. It was a similar distance between Hong Kong and Shanghai. Flights were fully booked and train was a last resort. I was reading for a few hours before finally falling asleep. I woke with a blurred vision, sore throat and pounding headache; I woke to the man bellowing Swedish on his mobile phone; the family of 3 were packing/unpacking, folding up beds, chatting, oblivious to the rest of the cabin sleeping. Argh.
All announcements were made in Swedish throughout the journey; it was pure guesswork as to how far we were from Kiruna. Drifting in and out of sleep with a worsening fever, I somehow put on all my layers in case Kiruna popped up as the next stop. The thickness of the snow was frightening outside. 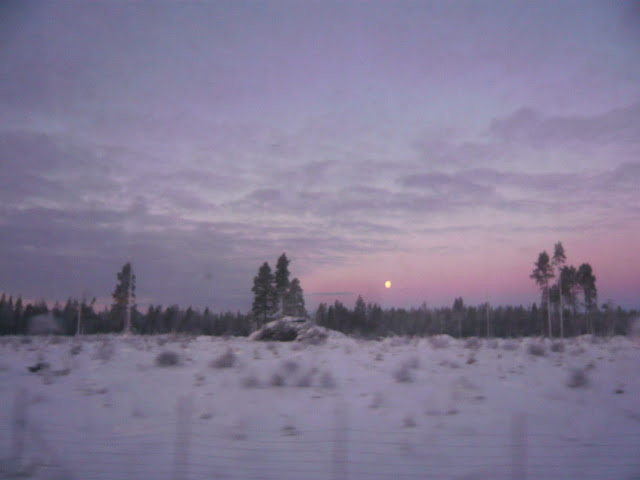 I must have baked myself in the thermal layers for 3 hours before we caught ‘Kiruna’ in a torrent of Swedish from the speakers. Sluggishly I dragged myself off the train, expecting a gush of arctic winds to numb my sense. But nothing. It wasn’t cold. Sherwin was sweating, though. He had a panic attack over losing his passport (which I don’t know why he bothered bringing it along anyway). There were 13 pockets on his jacket and another 7 on his trousers. He rummaged through the cabin twice and reluctantly saw it moving to Norway. On the platform Sherwin had to undress to find his passport securely zipped in his inner trousers’ side pocket.
We arrived at 3pm as opposed to the scheduled 10:30am. The sky was pitch black. Kiruna is the most northern settlement in Sweden; well into the Arctic Circle. It was larger and more developed than I imagined.
Snow boots are great on snow, just not icy pavements. I half-glided-half-walked uphill to our hotel. It was just behind the town centre, a few corners from the tourist information centre. It was Christmas Eve and every shop was closed. The double trouble was, even the hotel was closed. Despite the forced confirmation Sherwin made the day before, it was just locked up with no bells to ring. This could be problematic. After 15 minutes of despairing disbelief, I caught sight of a hand written note with opening times during the festive period. With luck, it should be open at 4pm again.
It was getting colder as we made our way to the town centre in search of something open. Trusty Arabs. A pizzeria run by Arabs was packed with travelers who similarly found their hotels closed. Over a Madrid pizza and a funghi pizza, we discussed the possibilities of camping in the train station at -20, alternative plans if the town remained closed for the next 3 days and what brought Arabs to Kiruna. 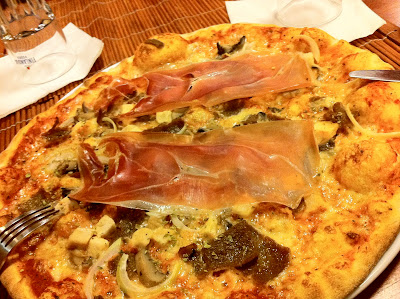 The crowd thinned as the clock approached 4. My nerves calmed as I began getting Wifi signals because the tourist information centre opened again. So did our hotel. I needed sleep; I could feel a 20kg weight sitting on my head. I started coughing too; each time was like a force yanking air out of my lungs, while a hammer slammed the back of head until I passed out.
We went to walk around the town when I woke a couple of hours later. We trekked to the edge, hoping to see the frozen sea, but the snow was piled too high. Seeing nothing was in business we went into the largest hotel in town, and had a couple of Swedish beers. Then went to see the Kiruna church, which was once voted the most beautiful building in Sweden. I have no comment; you judge for yourself. 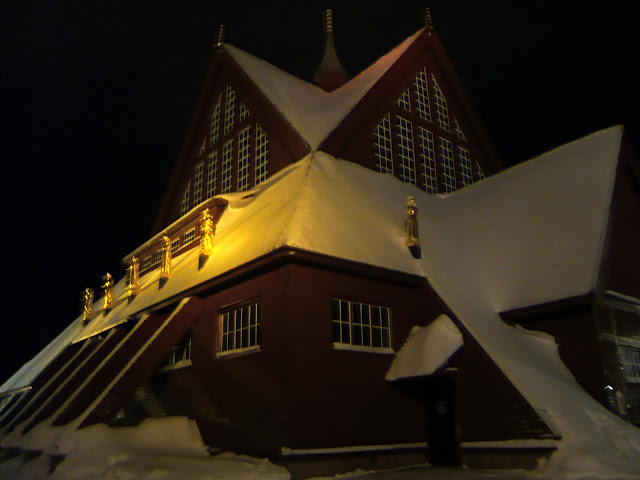 We met a local walking his white golden retriever (cross between a mixed husky and a mixed retriever) and we ventured further away from the town centre, while he explained the history of the iron ore mines and factories and its politics. Sorry I remembered the dog being Isa, but I couldn’t remember the guy’s name. I was ill, okay?
The sun never rose above the horizon; so at 11am I couldn’t tell if it was sunrise or sunset. The tourist centre was supposed to provide bus timetable to jukkasjärvi, where the Ice Hotel was. She helpfully said there were no buses at the weekends! What?! Then she helpfully booked us a taxi for 450 SEK. Apparently there will be buses running from January 2011, but I’d be damned if I were still in Kiruna then.
It was a 10-min taxi drive. But the Ice Hotel was a must-see for me. And I was made to feel slightly better for not paying the entrance fee. 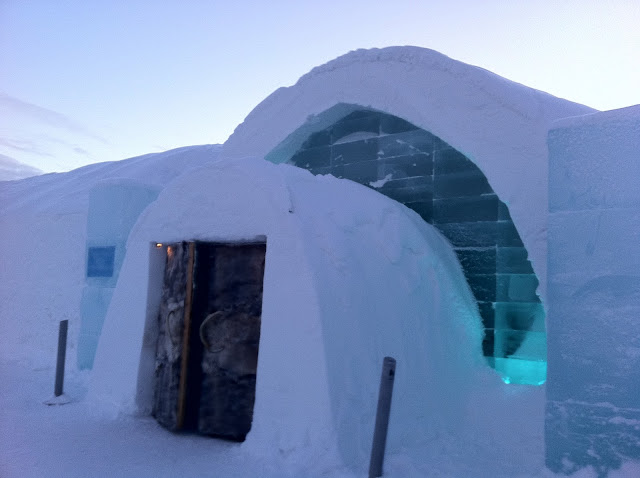 The design suites were stunning, and I couldn’t resist a “Wah!!” each time I went into a room. It was relatively warm inside the hotel too. Jukkasjärvi was much colder than Kiruna, but I could take my ski gloves off inside the hotel, provided I kept my hands off the ice. 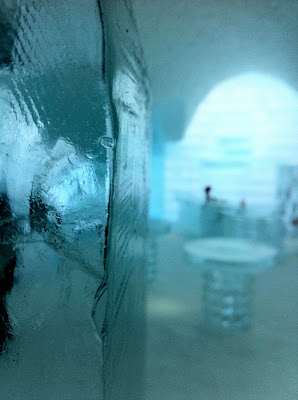 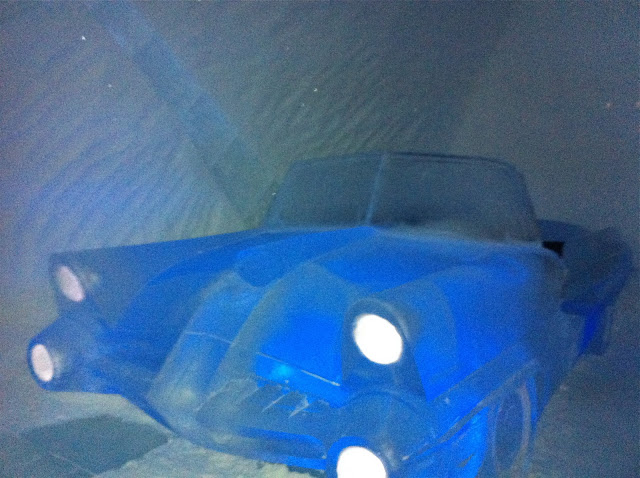 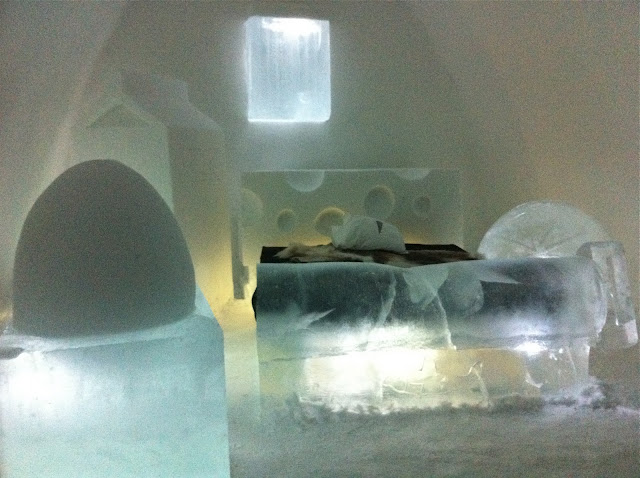 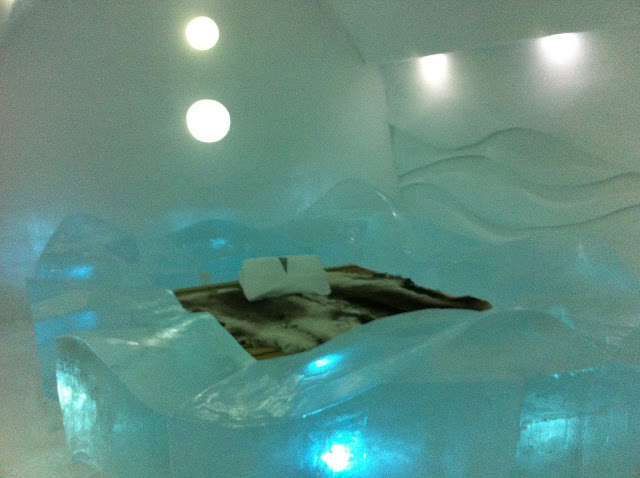 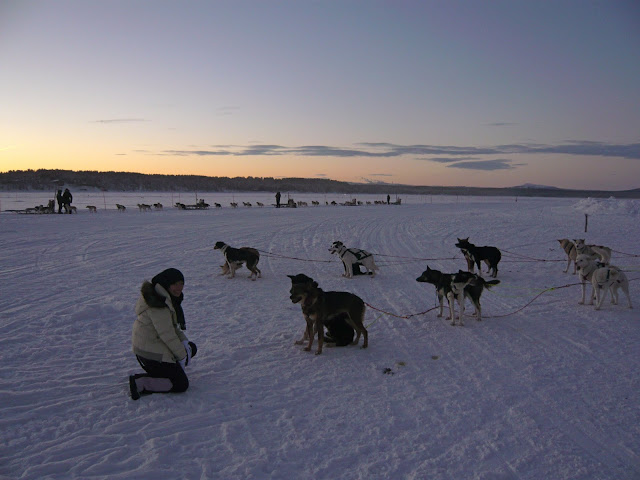 Since we booked the dog-sledding Northern Lights tour at 4pm, we had a couple of hours to kill. We walked 20 mins into the so-called town centre (there’s nothing but a church and 2 cafes, which were closed on Christmas day) and went into the Sami museum café for lunch. The museum was minimalistic. It consisted an outdoor area that costs 100 SEK to enter, and a shop, inside which there was a bonfire-lit café. 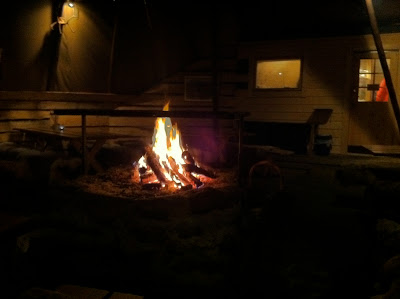 The reindeer soup (120 SEK) I tried was clear vegetable stock with strips of rubber-like reindeer meat. It could have been beef or ostrich for that matter. I was expecting a hearty thick chunky soup. My bad. 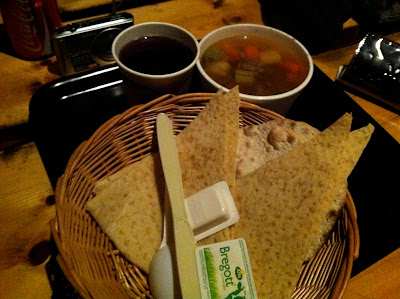 The Sami crafts were outrageously priced too. This hat, albeit with soft beautiful fur, cost 2750 SEK, and a fist-size wooden spoon was 600 SEK. I was gob smacked when the lady paid 6000 SEK for 3 items! I obviously need to work much harder.
The dog sledding tour operator a last-minute resource. Sherwin was so sure there would be tons of these operators, so he didn’t book. Turned out most of them preferred to have dinner with their family on Christmas Day than taking us to utter darkness with 12 dogs. Can you blame them? We were charged 1150 SEK per person.
The towns were so brightly lit that it became impossible to see the Aurora. So the sleds were to bring us to utter darkness, where the chances of seeing the Lights were much better.
The experience was surreal to say the least. The dogs ran for an hour, guided by the ‘driver’ torch, while we fixed our gaze at the sky. But no Lights. Just stars. Lots of them. We stopped in a hut for coffee and cinnamon roll midway. Not only were my toes frozen, my eyelashes too! The wind felt like blades piercing my face. My cough was getting worse. Disappointingly, there were no Aurora during the second half of the tour either. Better luck next time.
Restaurants in Kiruna opened on Christmas Day. We had elk thigh with cranberry jus and blackcurrant jam. It was delicious. The meat was tender and slightly pink, not unlike roast beef, but much thicker and it carried more flavour in the meat. I found the blackcurrant jam too sweet, though it was a good compliment with the elk. 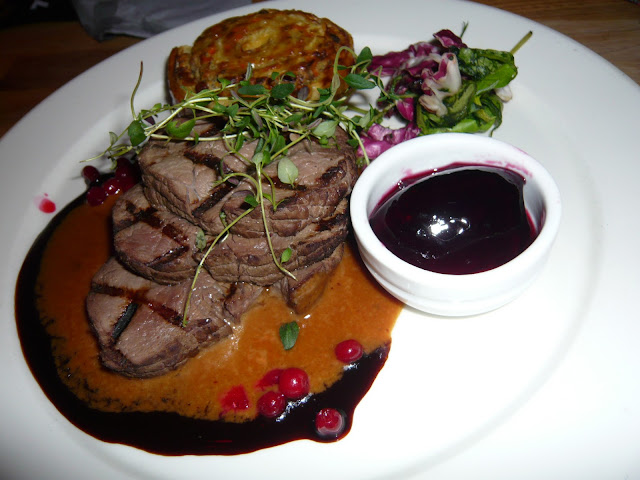 I had to leave Sherwin behind on Boxing Day, as he could only find one seat on the early flight, and I had to catch my flight back to London. Everything was closed in the morning, as it was a Sunday mixed with Boxing Day. The airport bus took me to the Kiruna airport, which redefined dingy airport. One gate, one runway, 2 counters. I was disgustingly ill, and I covered my face and slept on the plane.
From Kiruna, the plane landed in Arlanda Airport, from which I had to take an express train to Stockholm City centre. Then take the coach to Skavsta Airport. It was a mad rush. My name was being called as the final call. I suddenly realized I have lost my Hong Kong passport. I tipped my bag out, still no passport. Okay, use my British National Overseas passport for now, worry later. Coughing away, I couldn’t find the gate! Come on, there are only 6! In a mix haze of panic and sweat, I made it to the plane. Ignoring the angry stares, I slept.
Came home to London to meet yet another tube strike. I almost broke down to tears.
Gatwick was flooded with people trying to buy a train ticket to Victoria, from which I had no idea how to get back to Canary Wharf.
Sulking, I threw myself onto the train without a ticket (we were packed sardine-style, there was no way for a ticket inspection anyway). If I had queued for a ticket, I would have missed the last train; it was a 2-hour queue, at least. From Victoria, I took Bus 11 to Bank, because the taxi queue was a joke. At Bank, they had the cheek to shut the entrance, and made people walk on street level to Monument to get on the DLR, which was a 23-min wait before the train arrived at the platform.
It took me 2 hours to fly from Stockholm to London. It took me 3.5 hrs to home from Gatwick.
Sort it out Boris!
at 12:41