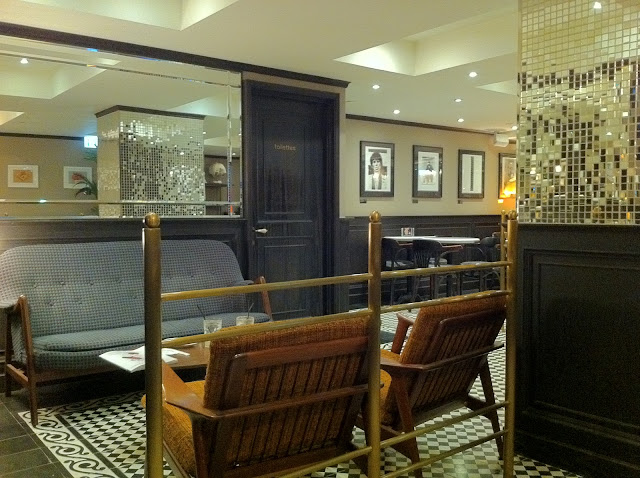 Hong Kong is a superficial city. Brands are adored. Office ladies would splurge 70% of their meagre salary on the latest IT bag, or survive on pure determination during lunchtimes for a Chanel wallet. Alternatively, some would twist their partners' arms for the most sought after Hermes Birkin.

So naturally, when Agnes b. opened its cafe and chocolatier in Causeway Bay, it quickly became talk of the town. I had a feeling it was very much like the Armani cafe in London: printing the brand on some cheapies with stuck up waiters and bill us for Ritz Carlton experience. So this visit to the Agnes b. cafe was purely by chance, and it turned out to be a pleasant surprise. 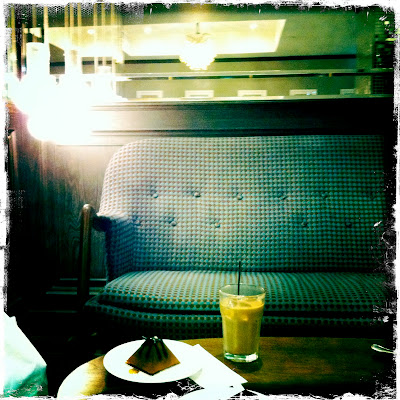 Interior took us down the memory lane of 1960's French with black and white tiled floor and small circular marbled tables paired with heavy wooden cushioned chairs. We sat in the corner on a vintage-like sofa with a wall-sized mirror in the backdrop, beside a bunch of posh light bulbs. Very classy. Even les toilettes were impressively decorated with patterned walls in cyan velvet. 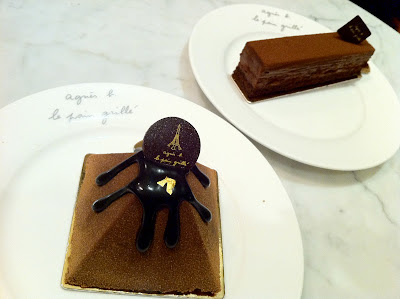 The pyramid was made up of various layers, including a rich sponge at the bottom, a couple of dark torte layers, sandwiched by crispy wafers and a thin coat of raspberry near the top, all encased by a delicate cocoa dusted chocolate shell. It was beautifully crafted, where the wafer gave the smoothness a spike, and the berry jam offered a zing in the layers of chocolate indulgence. Melanie was a simpler composition by comparison, dense chocolate torte on a crumbly base. It was of a cheesecake-like creaminess and equally luxurious. 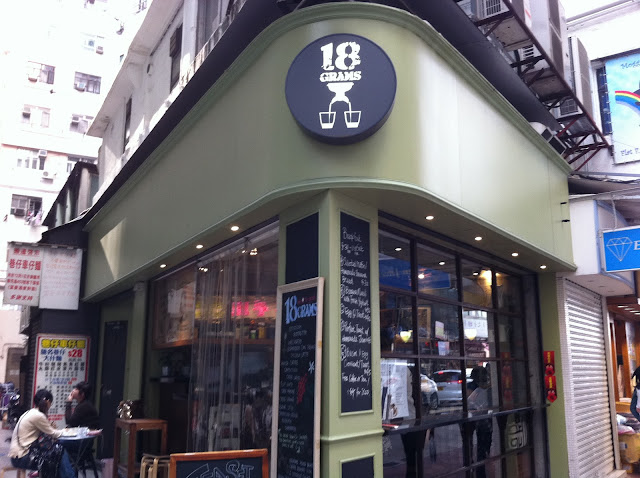 So where does one find a good ice coffee, that is not sickly sweetened by flavoured syrup nor wastefully watered down by blocks of ice? 18 grams. It's so tiny, was the name referring to its size? Realistically speaking, it could accommodate 3 people standing at the same while the rest of the space was taken up by 3 tables. Yet the ambience was so relaxed, it was a distinction contradiction to the busy road outside.  The simple decorations and a full-length window made it perfect for people watching. 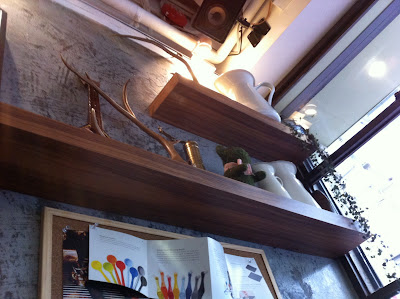 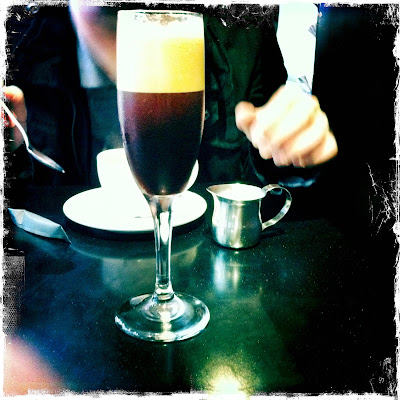 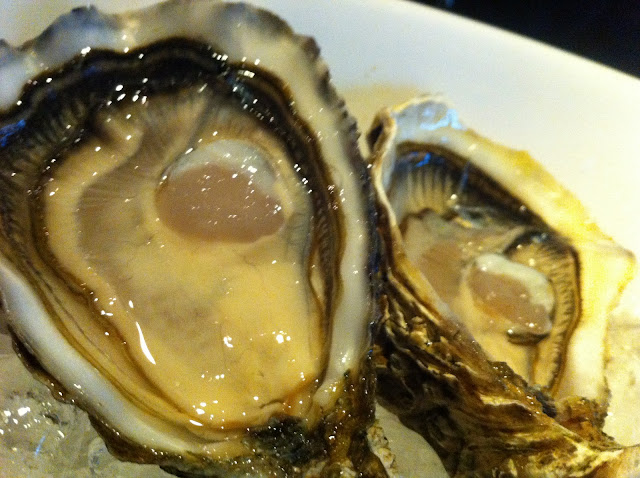 Cafes and restaurants have moved into buildings as opposed to the ground floor space, which have been taken up by international coffee chains that can afford the ever-increasing rent. First-floor cafes verge on the shabby side, with the windows half blocked by air conditioners or massive billboards, serving microwaved snacks and gimmicky drinks. Restaurants, on the other hand, have been exceptional provided you choose the right block. The good ones have a tendency to cluster. The restaurateurs invest on higher quality ingredients with the money saved on rent. Casa Fina and Koysu are prime examples.

Mum loves oysters. Sadly Dad and Bro are avid haters of the rocky gem. I was determined to treat Mum to an extraordinary selection, so she could experience beyond the usual Pacific rock. Casa Fina and Su Casa import 18 types of oysters from all over the world, team them up with knowledgeable staff that would eloquently describe their characteristics and features. 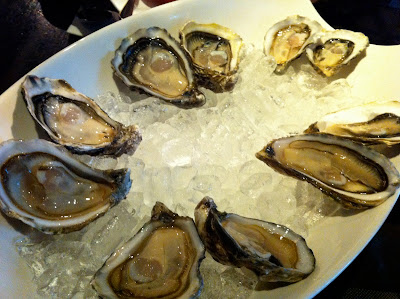 So these have been arranged in the order of their strength in flavour.  Langebaan was light and sweet. Irish gigas were slightly disappointing as I was a expecting plump, luscious sac, but turned out to be quite meagre. L'ecaille D'argent was very mellow at first, but the seawater came gushing back with a zealous aftertaste. Utah Beach was also deceivingly slim at first glance, but was strong in zinc. Gillardeau was rightly left at the end, voluptuous and explosive that dragged us into the sea.

I was tempted by black and white pearl, too. But the expert quite honestly pointed out this February was an off-season for those oysters, he wouldn't like to spoil our first impression of these jewels. You've got to respect professionalism.

Our lunch then continued with a chunky pumpkin soup, sprightly Caesar salad and a 12-ounce medium rare sirloin steak, which was grilled superbly to unleash the beefiness of the juicy meat. Stunning meal. 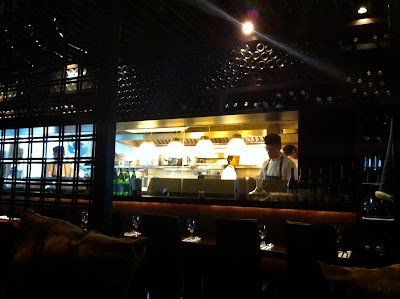 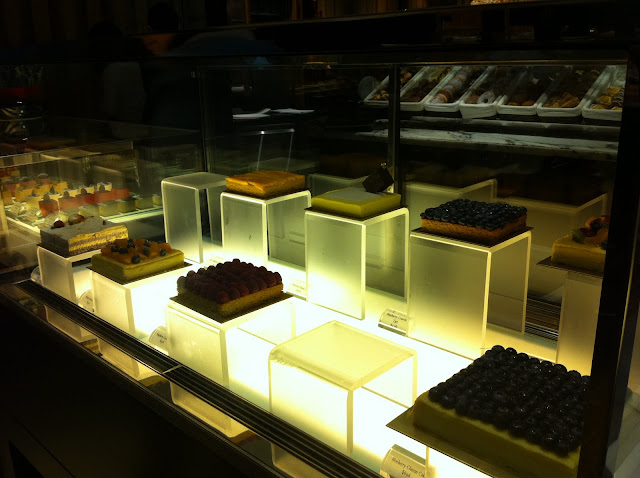 The Patisserie at Mandarin Oriental has been serving legendary confection and scones for decades. I felt bad that Dad missed out on the scrumptious Joel Robuchon lunch, so we crossed the street to Mandarin Oriental to pick up some desserts to sweeten up his evening. Chocolates and cakes were glimmering in the display case, immaculately lined up to allure us towards the gaudy assortment. We skipped the boring mango tarts and chocolate mousse, instead we endeavoured some unheard of combinations. 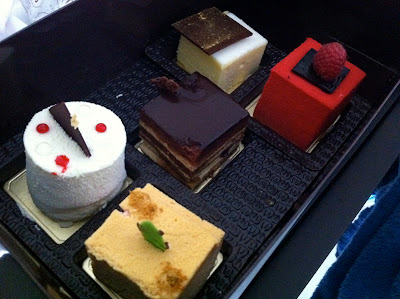 Just in case the innovative recipes go completely wrong, the latter two were supposed to save some grace for the cake guru.

Banana & Guava sound like an unlikely blend; first was a whiff of guava, its fragrance loitered until the underlying hint of banana took over as we hit the slice of fruit buried at the bottom. The red block was visually delightful, I must admit I thought it looked better than it tasted. While the mousse was sexy and smooth and sweetened to perfection, it was somewhat ordinary. The lychee was an undertone to the punchy raspberry filling in the middle, the soft sponge neutralised its sharpness. The cheesecake was voted the best of the lot, a solid block that slowly melted in mouth to release its complexity. 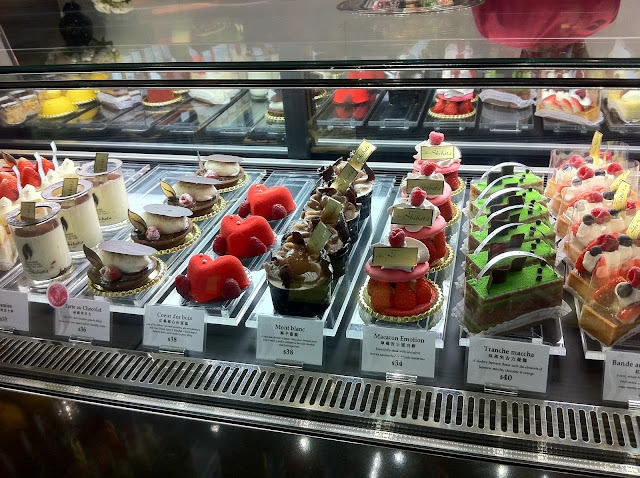 Chez Shibata has earned much rave reviews since opening in Hong Kong. The Japanese pastry chef is recognized for the exquisite facade of his cakes. They all look so velvety… 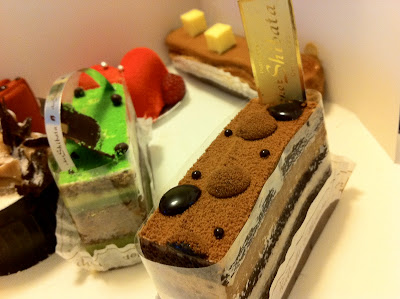 Despite the layering, there was little variance in texture, the sponge and cream were too moist to my liking, but the banana was strong. Maccha (green tea) was very mild, as the chocolate layers were too sweet. Again, too moist. 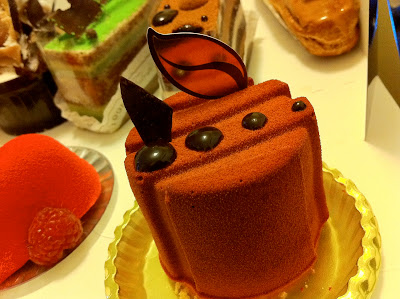 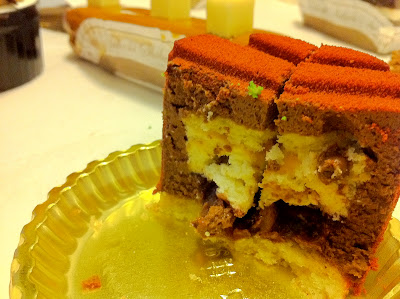 This was my favourite. The smooth chocolate mousse sheathed a dense creamy centre, sprinkled with some crunchy chocolate balls, and a sheet of dried cranberry to take the edge off the richness. 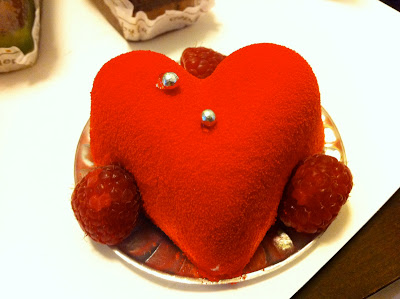 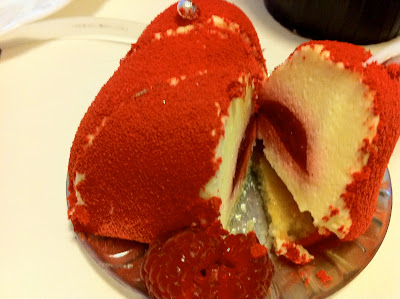 Oh this looks so pretty, but oh it was so bad. The berries were so sour, and the jammy filling was totally not my cuppa. Cringe. 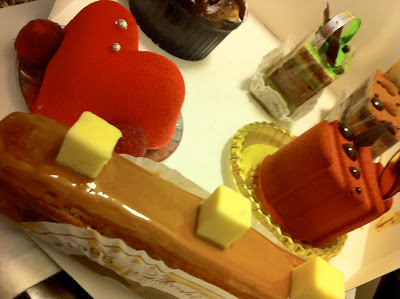 Éclair had a crispy (almost biscuity) shell, the toffee was extremely sugary, and the butter lumps did little to relieve it. Mont Blanc was a chestnut tart (sitting at the corner). The chestnut puree wasn’t bad when mixed with the crumbly egg white cookie bottom. Yup, it wasn't bad.


These sweets have been a hit in Hong Kong; milk pudding made with Japanese milk and sheets of flavoured ice and condensed milk. I think they are well worth a try to tick the boxes, but I’m not rushing back for seconds. 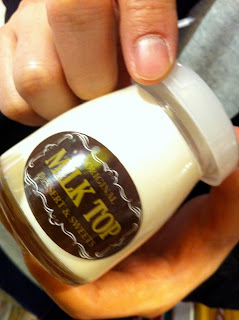 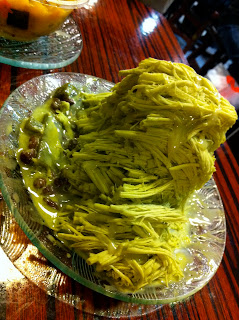