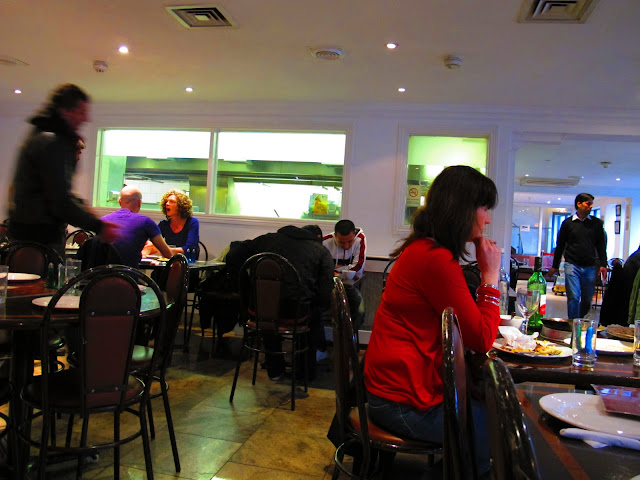 It’s been almost 5 months since my move from West to East London, and I have yet to check out Brick Lane. It’s a shame really. With the culinary debacle at The Spice Merchant still fresh in mind, I decided a bit of research (google) was necessary. Fellow foodies have collectively suggested Aladdin’s, Bengal Cuisine and Preen, but more urged to escape from the tout-flooded Brick Lane and venture further to New Tayyabs or Lahore Kebab House.
Originally it was Tayyabs that had won our curiosity. The queues are infamous and Mister made an online reservation, only to be told that they are booked up and didn’t bother replying when we called to confirm. Okay, Lahore then.
Lahore Kebab House must have spanned across 3 shops, with a double entrance and a spacious foyer. The kitchen was showcased, but it attracted much less attention than the 2 televisions hung on the walls of the dining room. Menu was printed on a laminated card. Punjab is a region between Pakistan and India, so the menu looked vaguely unfamiliar compared to the usual Khan’s at Bayswater. It was more Pakistan than India. As we were seated, a waiter brought over a bottle of still water and a plate of salad, which remained untouched.
The waiter had his eyes fixed on the cricket shown on Sky Sports 1, and was nodding as he approached us to take our orders. I asked if they offered mixed grill platters, he was mumbling ‘yes’ throughout my question. He answered ‘yes’ when I asked what was included in the platter, and if they did one person’s portion. I gave up. When I’d finally shut up, he asked if we wanted lamb chops. No. Yes? No.
Mixed Grill Platter (£7) - 2 Seekh kebabs, 1 Mutton skewer and 1 Chicken kebab 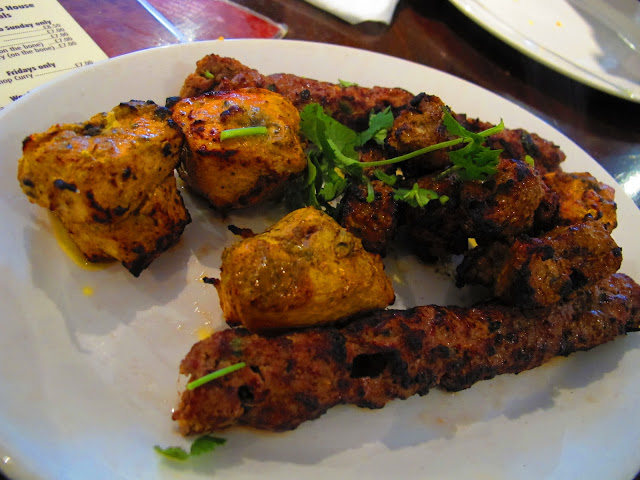 I could smell this platter creeping behind me. As I pressed the knife into the seekh, its juices were oozing out like a saturated sponge. It went quite easy on the chillies, just a pleasant mix of coriander and lemon juice to wake my senses. Mutton kebab was probably two steps up the heat ladder, heavier with cumin and paprika, nicely grilled to retain its succulence. I hate chicken breast. Bosphorus at South Ken does the best chicken leg kebab in my little universe, so nothing would compare. Sorry.
I have no idea if this was his idea of one person’s portion, but it doesn’t matter because they just charged each item accordingly, and these were all listed on the menu. Should have gone for the lamb chop too. They looked and smelt so good on the table next door.
Curry with Lamb on bone (£7) 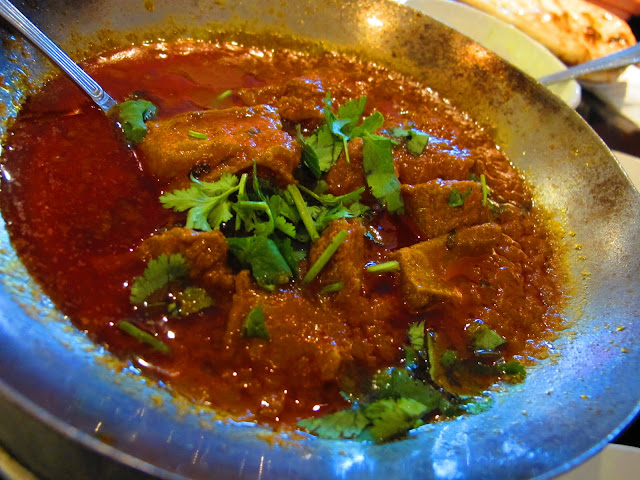 This was one of the weekend’s special. There was no description of what type of curry it was, but we felt adventurous (I couldn’t decipher half the meat main dishes). At first I thought it resembled a milder Rogan Josh, but the flame slowly seeped through and the flavours of the spices bloomed. It wasn’t mild, but still manageable. No hint of stinging tomato, just a heavy load of spice and chillies with yoghurt. Lamb pieces were tender, flaky and fatty, which added the characteristic tang to the dish. Great stuff.
Garlic Naan (£1.50 each) 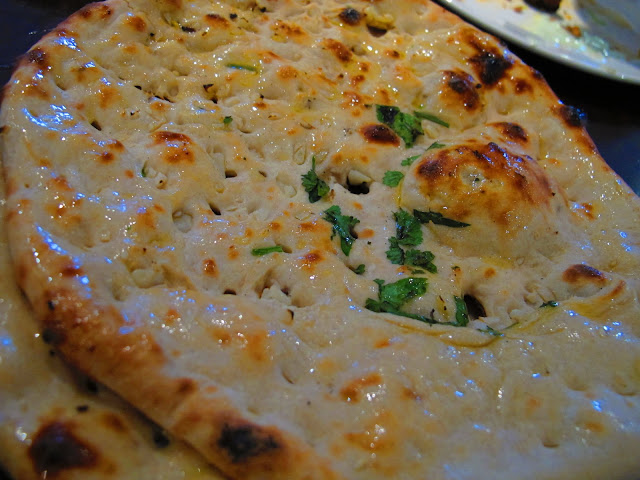 I think it was smothered with a layer of butter on the surface, as I could only smell butter but not garlic. More likely to be ghee, which is a kind of liquid cow's fat, popular in Pakistani cuisine I was told. Anyhow it was bouncy and fluffy, tastily greasy.
For just a tenner per head, we were stuffed to the brim and could only manage soup for supper. I know nothing about Punjabi cuisine, so have nothing to compare this experience to. Nonetheless I thoroughly enjoyed the meat and the heat. With a steady flow of customers well after 2 o’clock on a Sunday afternoon, this place must at least benchmark. As for service, they don’t charge for it.