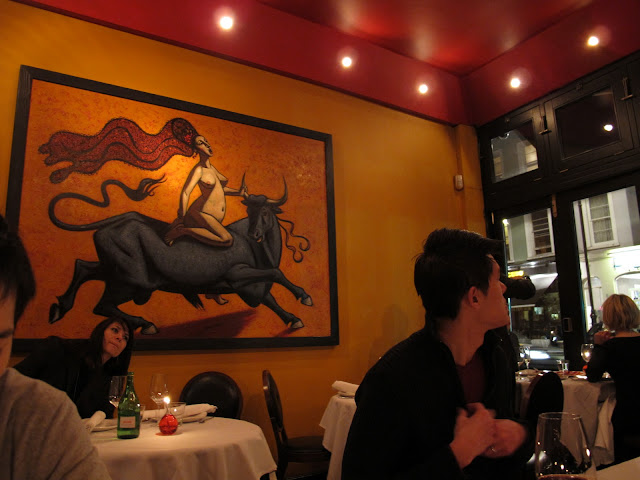 Spanish is one of my preferred cuisines; and tapas is a clever creation that allows us to sample more on the menu in one go. After visiting the better known Spanish restaurants in London, namely all three Brindisas, Salt Yard, Iberica, Fino and even El Faro, I couldn’t help feeling slightly bored of the tired usuals. Don’t get me wrong, it’s still lip-smacking food, but I wouldn’t mind some variation?
Then we stumbled across London Eater, who highly advocates Cambio de Tercio with stunning photographs and in-depth reviews on its awesomeness. We were intrigued.
I used on to live on the street behind the restaurant, in fact I walked passed it countless of times for my groceries shopping trips. It was only tonight that I noticed its flamboyance; lurid walls of Spaniard orange and red with a full house of bubbly diners. We were welcomed with open arms. Service couldn’t be speedier with the nibbles and menu.
Cheese Lollipops 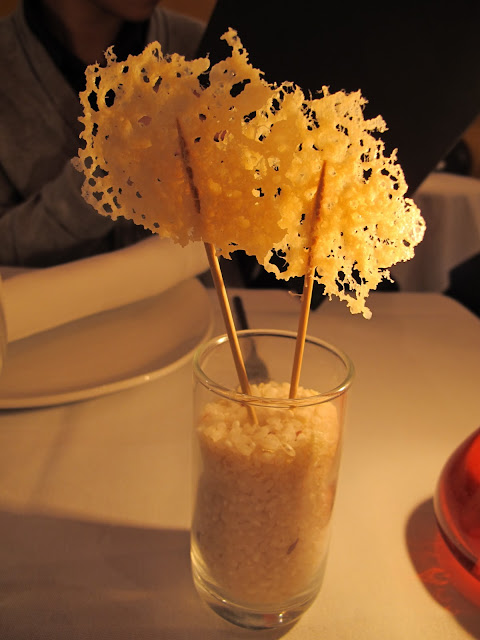 These were so pretty, like snowflakes. We agreed that it was like the crispy bits stuck on the baking tray.
CdT claims to reflect all the latest innovations created by the very Best Establishments in Spain, and so I wasn’t surprised to see the menu dominated by bolder recipes including the likes of “orange air” and “Martini Rosso jelly”. We opted for the 7-course winter tasting menu, which consisted nothing from the regular list. Guinea pig? Faith.
Oyster, Shallots Vinaigrette, Red Grapefruit 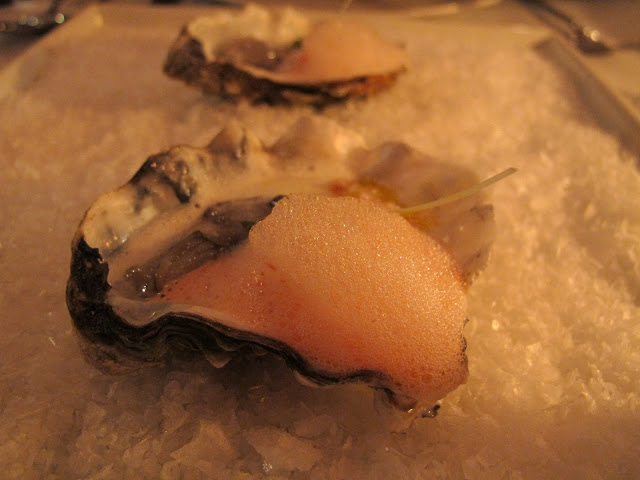 Doesn’t it look hazily familiar? My mind whizzed back to the poached Maldon oysters at Pearl. The oyster looked ever so inviting with the dollop of girly pink grapefruit foam, casually slanting on the shell. My taste buds were first met by the citrus and a hint of bitterness from the grapefruit, followed by stronger acidity from the vinaigrette, which was quickly balanced by an intense sweetness before the oyster washed everything away to leave a brief aftertaste of seawater and minerals. The layers came and gone in one whoosh.
It was okay. I guess it could have been better. The Yuzu sorbet oysters at One-O-One had a similar effect, and the ones at Pearl was too good both in terms of flavours and texture.
Game Stew, Amontillado Sherry, Potato, Ham Torreznos 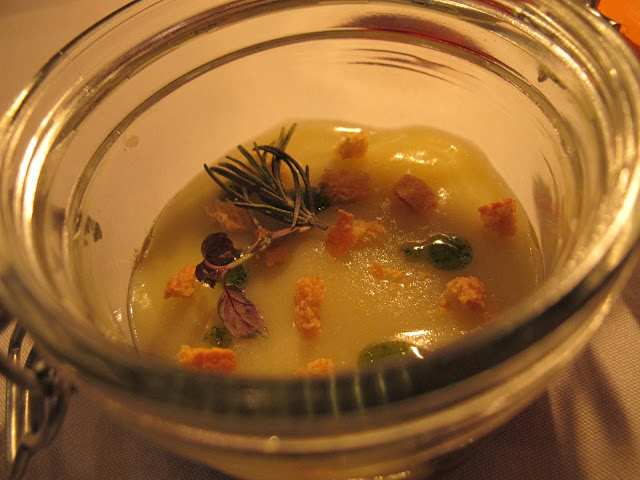 The stew consisted of venison, partridge and quail. I could also taste something livery. Torreznos are the fat trimmings from the cured ham, which was infused into the potato to enhance its fragrance. The game meat had almost dissolved in the sherry sauce, which went beautifully with the potato cream. Almost like a regal version of a cottage pie; a hearty winter dish.
“8 hours cooked” Semi Dry Tomato, Cecina Cured Beef 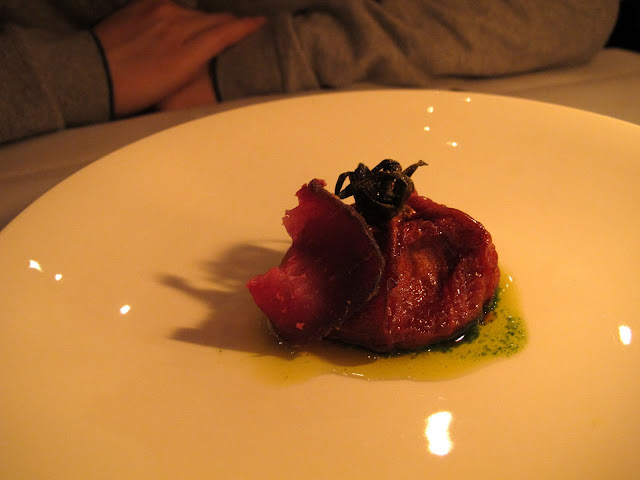 It’s almost like a raison; its juices withdrew leaving a sack of natural syrup. Perhaps sweetened ketchup in solid form? The cured beef had an enduring aroma that lessened the sugar in the fruit. Good combination, though I felt the 8-hour procedure unnecessary, as if the kitchen was doing the hard work for the sake of doing work. There was no “wow” in the outcome.
Grilled Seabream with Orange Escabeche and Bierzo Lentils 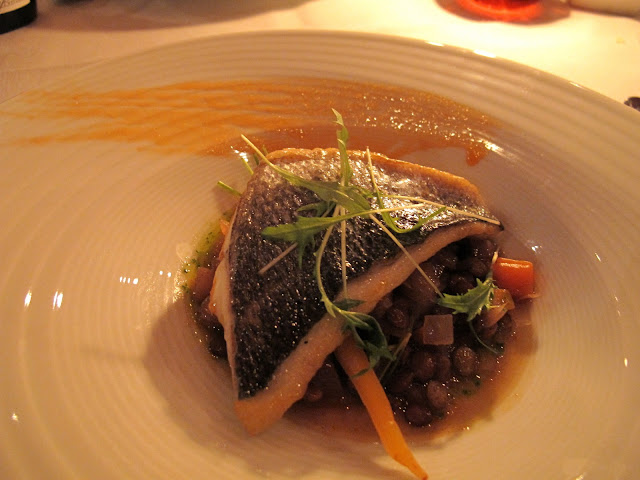 This was unsuccessful. I was prepared for the sharpness in escabeche dishes, and orange sounded like the right ingredient. Sadly I could only taste vinegar. Despite the fish being well cooked, it was spoilt by the overwhelming acidity. Even on a hot summer day, this would damage the palate rather than triggering it. What is it doing on a winter menu anyway?
Red Deer Fillet, Bomba Rice with Spinach and Torta Del Casar Cheese 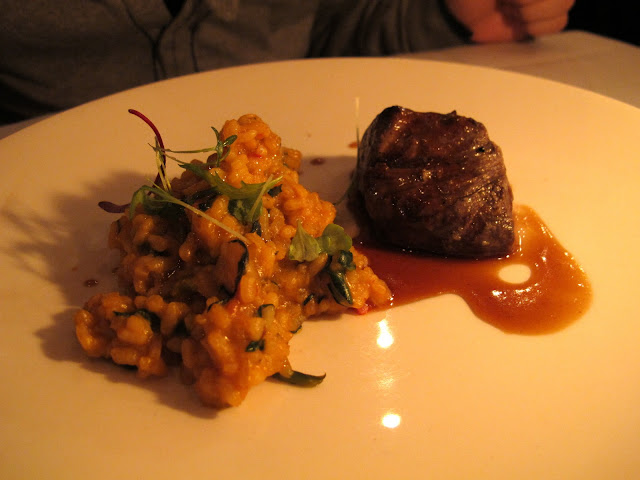 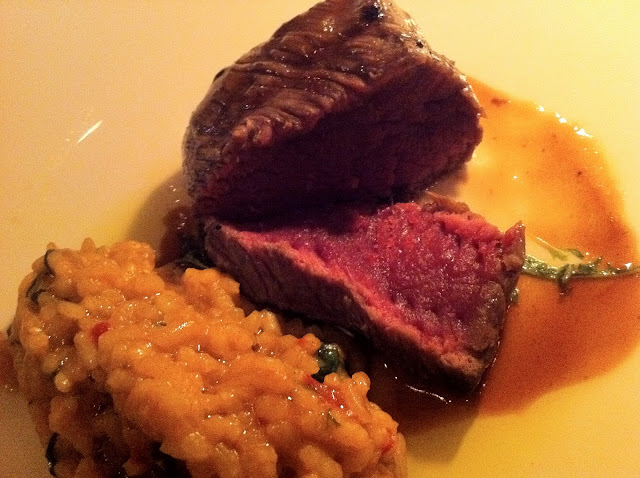 The round fillet was extremely bouncy as I was poking it with the knife. It revealed its deep red rareness upon cutting. The meat was brilliantly aged, and the searing sealed the gaminess packed in the lean muscles. Stunning. The cheese in the rice was nutty and pungent, almost a cross between goat’s cheese and parmesan, which complemented the deer and rounded off the dish.
White Chocolate Ganache, Pistachio, Passion Fruit, Ginger Ice cream 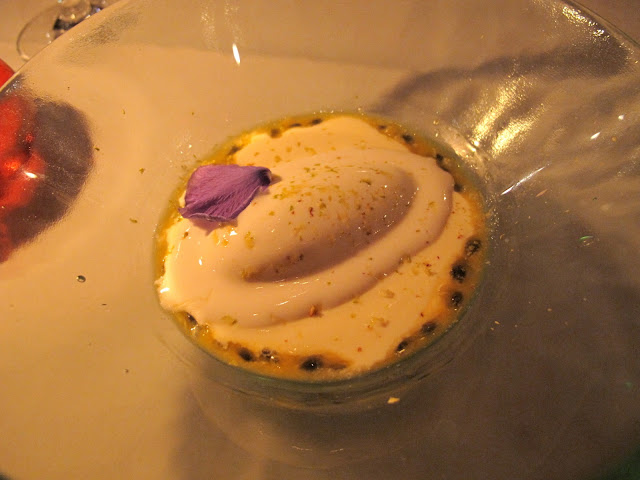 This was two types of smoothness with two essences. The melting ginger ice cream carried a scented heat that merged with the denser ganache. For some strange reason, we could taste cream cheese in the ganache. It was a gentle finish to conclude the complexity of flavours throughout the menu.
Chocolate Truffles & Lemon Sponges 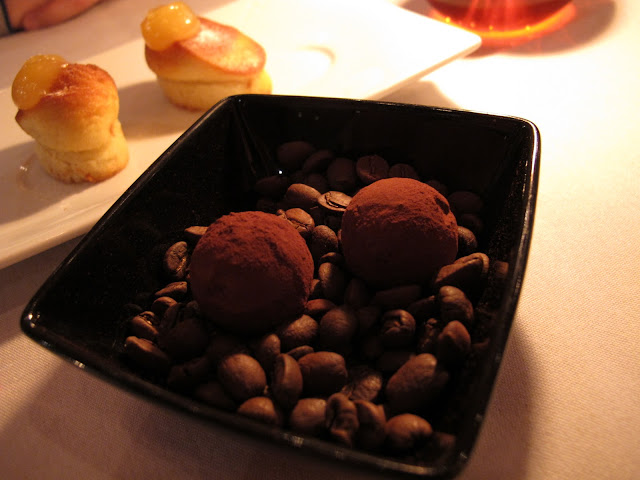 It was obvious from the touches of molecular gastronomy that the kitchen has perfected the technicalities. But this tasting menu didn’t punch all the right buttons. On the other hand, the a la carte was elaborate. I was looking around to see what were being delivered to the other tables. I totally wanted those instead! It is bound to have more tried and tested winner recipes.
In spite of some disappointments, Cambio de Tercio is by far the most positively different Spanish I have tried in London.
And apparently, Rafa dines out here during the Wimbledon… 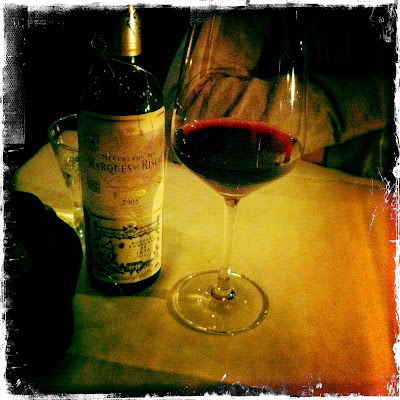