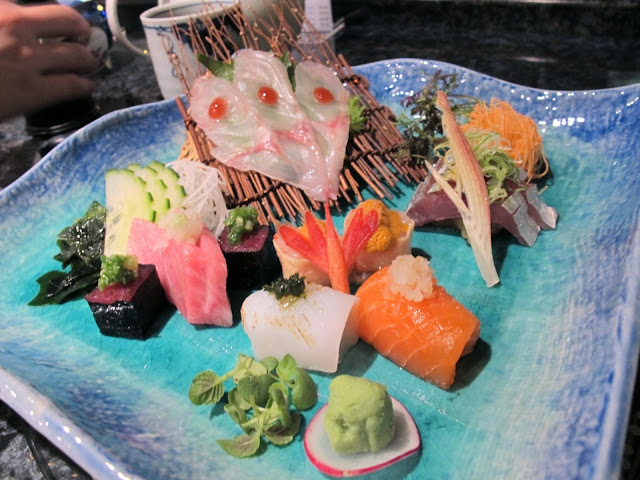 Spring is a little late this year. London has finally warmed up in the final weekend of March; loving the double-digit day time temperature. The sunshine calls for sashimi.
Sushi of Shiori doesn’t need much introduction; the fine sushi bar run by ex-Umu chef has been widely blogged and reviewed. With a three-week advance booking, we got ourselves a £40 Omakase session.
Okay people say it’s small, I just didn’t know it was that petite. There were 3 bar seats facing Chef and another 5 facing the full-length window. A couple was already seated in front of Chef, gnawing away their picturesque sashimi platter. The ambience was slightly awkward to be honest; I felt I had intruded their silence with my entrance. I gradually eased up when the hostess introduced the drinks menu and asked if we were ready to start. She’s pleasantly loud.
Amuse Bouche – Pickled Aji with Preserved Vegetables 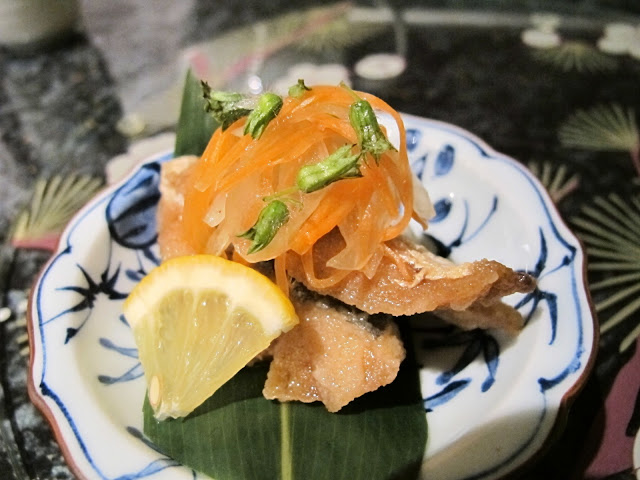 Aji, also known as horse mackerel or scad, was deep fried before pickled. Pretty standard stuff. The vinegar was fruity and the sweetness of the finely shredded carrots steered the dish well away from unbearable spikiness. It worked well to cleanse my palate.
This was followed by a bowl of miso soup with a hint of tomato.
Appetiser - Razor Clam with Ponzu Sauce 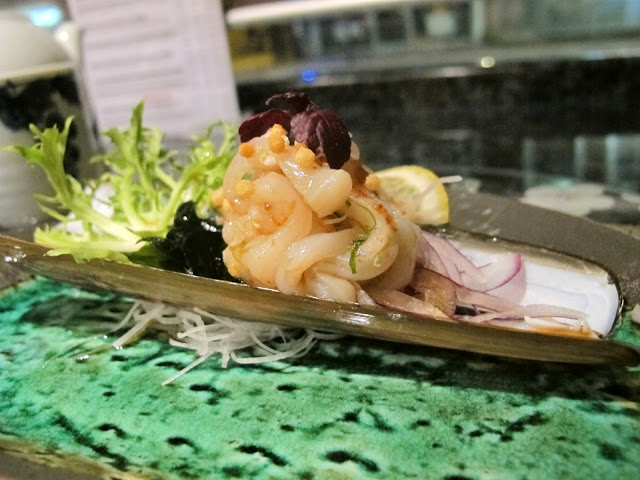 Razor clams were on the day’s special menu too. While the bouncy clam paired with the punchy Ponzu sauce was refreshing, I thought the slicing defied the distinctiveness of razor clams. Perhaps slicing the fat clam meat could ease off the chewiness and help holding the sauce, but what I love about razor clams is the sweet juice they release with each chew. In my humble opinion, the shellfish didn’t push through the sauce.
Sashimi Platter 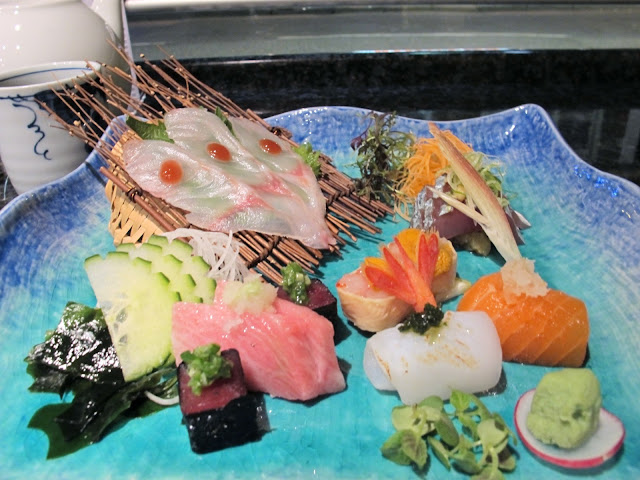 Truly artisan. I actually felt sad destroying the artwork.
Much thought as gone into the pairing of each sashimi with its accompaniments; the milder seabass was enhanced by the sharp plum sauce, made even better with the unique shiso leaf fragrance; horse mackerel was served with smoked aubergine to relieve its fishiness. Even the boring squid had its texture exaggerated to maximum squishiness. Uni and Ubi (diced and wrapped with a thin soya sheet) should totally get married coz I want to eat their children. 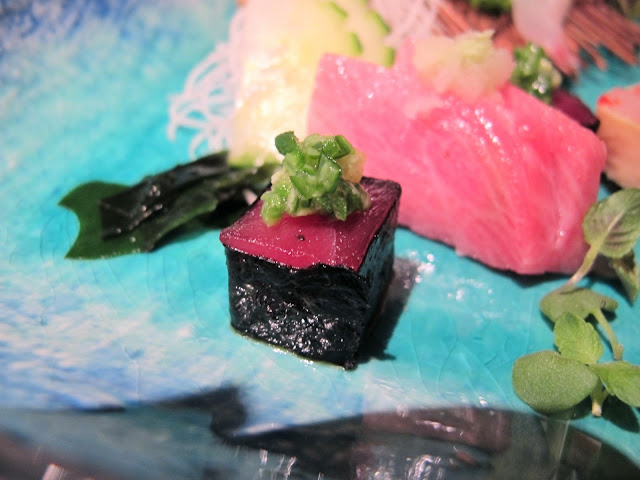 The tuna cubes were so intense, as if someone had mashed the maguro and smeared it across my tongue. 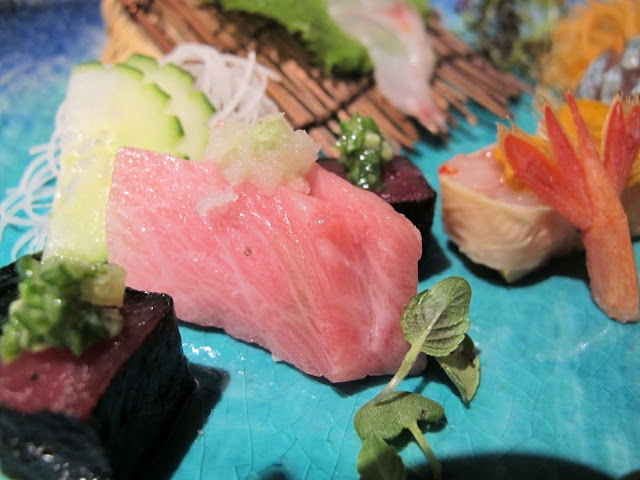 And of course the obese o-toro. I could almost see a tear in the corner of Mister’s eye.
It wasn’t just the freshness and quality of fish. It was the delicate balance and exquisite skills displayed by Chef too.
Sushi – Chu-Toro, Grouper, Scallop and Shishito Peppers 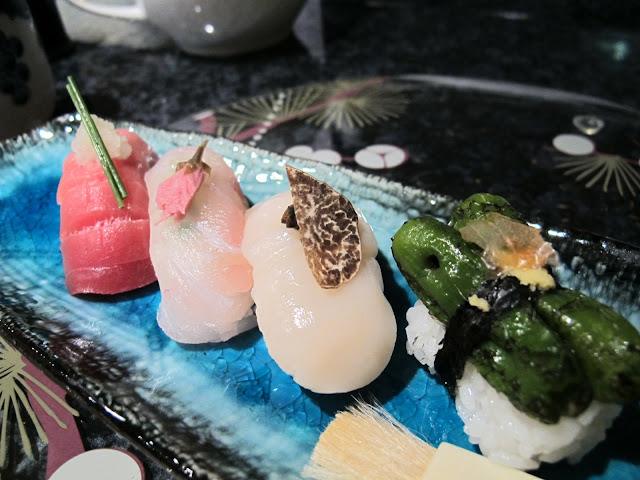 Usual etiquette is to flip the sushi upside down and lightly dip the fish into soy sauce. Seeing all the ‘accessories’ on top, we were given a brush, isn’t it cute?
The chu-toro is out of this world. It melted into the sushi rice, no tendons. Just a trail of fish oil. Scallop was topped with white truffle imported from Italy. The truffle wasn’t overpowering, perhaps because the fungi’s perfume is better unleashed with moderate heat, but this allowed the natural charm of the scallop to shine through. It was an extravagant combination.
I wasn’t mad about the grouper, another meek fish, nor the pickled flower. I won’t go melodramatic over the Japanese peppers. They taste exactly like normal green bell peppers, but lack the bitter undertone and replace it with a faint curt sweetness.
Steamed Sushi 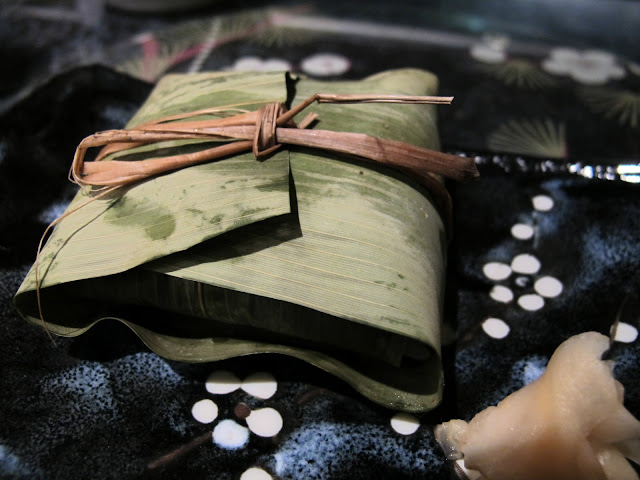 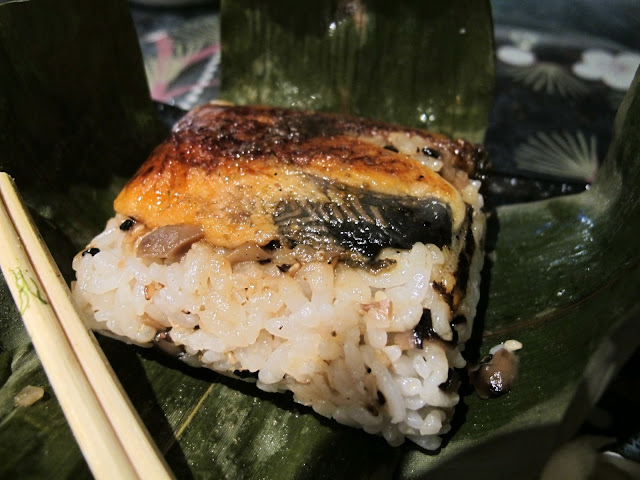 Seasoned rice with chopped shitake mushroom and black sesame, topped with unagi and a generous splurge of eel sauce. There is no way unagi on a bed of rice could go wrong. Chef just took it to the next level by steaming the parcel with aromatic leaves to drawn in its fragrance. Ace.
Had the joint been equipped with a charcoal grill to add more bite to the eel edges… I’m asking for a lot here.
Wagyu Beef Sushi 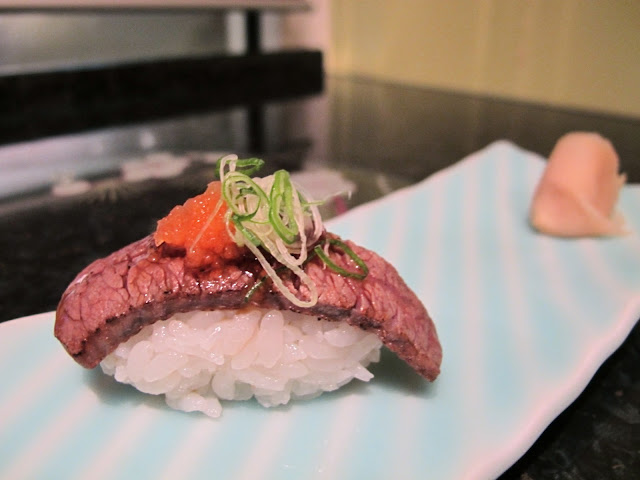 Usually I turn my nose up at beef sushi. Raw Wagyu beef sushi is wasteful as the meat is only worthy of its price tag with melting beefy butter; lightly seared ones are slightly better but the beef has to be just thick enough. This little piece, however, had me grinning.
The light torching has dissolved the marbling fat but maintained the rawness of the meat. The fat-infused sushi rice blended with the velvety texture of the beef and a healthy splash of grill sauce, all melting away ever so smoothly.
Chef made Chestnut Ice cream 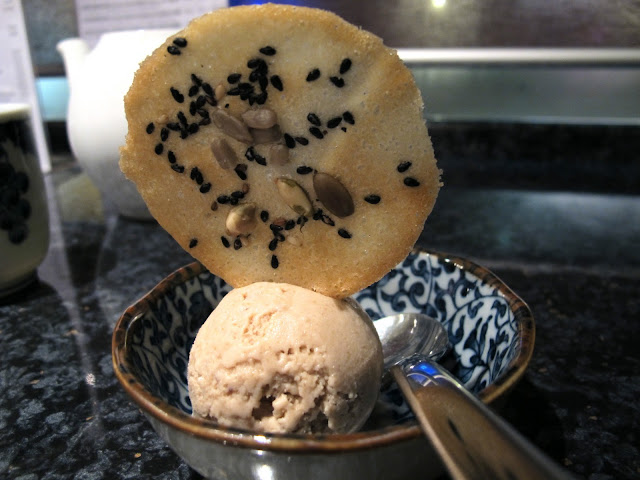 Despite the small broken pieces of chestnut hidden in the ice cream, it didn’t really taste of chestnut. Mister had sweet potato flavour, and we both wished we had opted for the conventional green tea and black sesame. But that’s okay, I didn’t come here for the ice cream.
Bill came to £95 for 2. I thought it was a bargain considering the quality, craftsmanship and the amount of consideration that has gone into the food. Mister was 70% full (aka with enough space for half a kebab) and me 90% (an ikura gunkan would be nice), which is about right. Fair enough there are minor hiccups such as my teapot came without a lid (intentional?) and tucking in my chair each time another diner squeeze pass to the loo, but this is no Umu and I wasn’t in my best pair of heels either.
Next time we’re going for the canapé sushi platter – one each – because Mister said he wouldn’t like to share.
Sushi of Shiori
144 Drummond Street
London
NW1 2PA
Tel: 0207 388 9962
(Omakase & Canapé platter by pre-order only)
You may also like: Atari-ya (Swiss Cottage), Tosa, Sake No Hana