Sông quê - Viet in the East of West 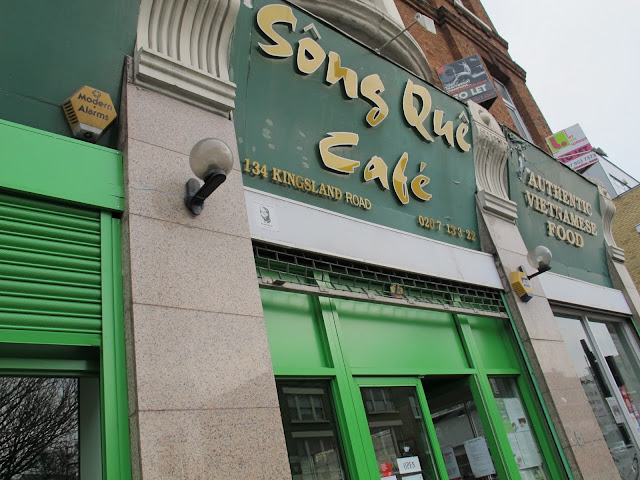 So I was saying we hit Kingsland Road by chance and briefly toured Tokyo while picking the right Vietnamese noodle joint. Talk about multi-culture. There was one Vietnamese resto every other shop, no wonder this was ingeniously dubbed ‘The Pho Mile’. It wasn’t an easy choice. The menus looked indifferent; names were all variants of ‘Viet’ and each window was plastered with newspaper articles or photographs with celebrity patrons. And none of them were short of customers.
Then we reached Sông quê at the end of the road. It was comparatively more toned down compared to its peers; no dark bamboos or deep purple table cloths, instead just light green walls and a lot of diners. The rule of thumb says: when in doubt, pick the most crowded resto that is not cheaper than its peers. We had a winner. 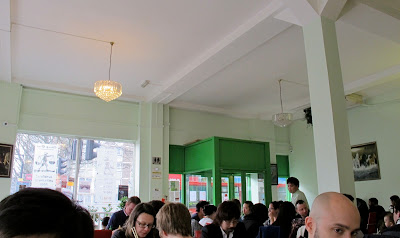 The place was buzzing. Waiters were whizzing between tables with 3 dishes on one hand and a massive bowl of pho on the other. The owner pointed us to a table in front of the bar, which hung two plastic lobsters with green LED eyes. The menu was crammed with words and a few pretty pictures at the back. To my delight, they serve cold vermicelli.
Spring rolls 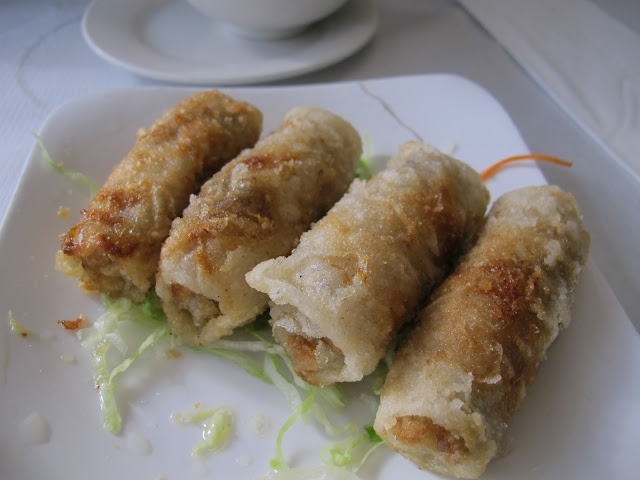 Four? Don’t they usually halve the two spring rolls?
These arrived piping hot. The bursting mince was juicy, and mixed well with the crunchy veg. I usually prefer a thinner wrap, since the double foldingoften traps excess grease and hardens the shell. Still, these were good.
Cold Vermicelli with Grilled Pork and Lemongrass 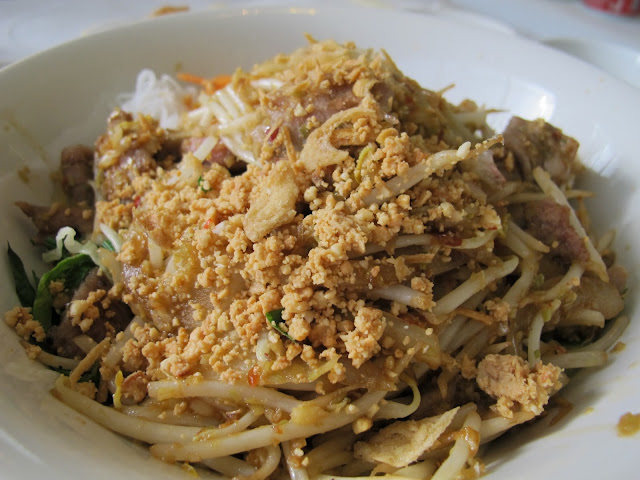 Okay this really is vermicelli, I was hoping for Vietnamese vermicelli which is slightly more transparent, flatter, thicker and more springy. Nevermind the tiny glitch. The rice noodles were well-cooked, dry and loosened easily to hold the fish sauce it came with. This was almost exactly what I had hoped for.
They serve big; the bowl was easily bigger than my head. The mountain consisted of thick slices of pork, bean sprouts and onions, topped with a generous sprinkle of coarsely grounded peanuts. The pork was tender with thin trims of fat, exuded immense fragrance of lemongrass when mixed with the fish sauce. Loved it.
Rare Beef slices, Flank, Tendons and Tripe Pho 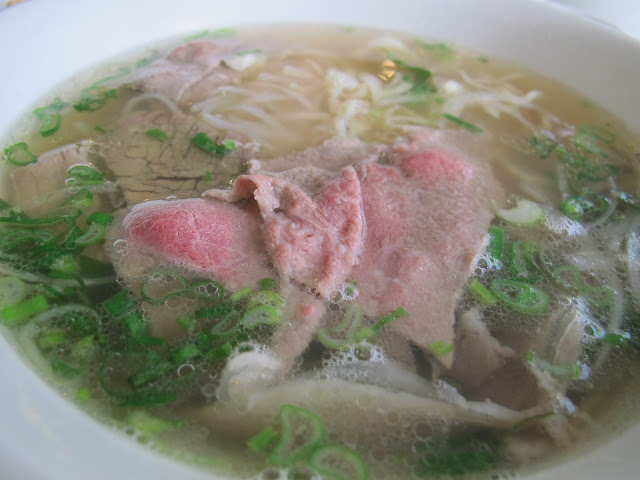 The list of Pho was a page long. Half of it was the permutation of the four beef items. We went for the full combo.
The wafer thin beef slices arrived pink in yet another washing basin size bowl, along with the usual bean sprouts and lime on the side. The broth wasclear with a skim of floating oil. It was sweet and bovine, its herbiness lifted with a squeeze of lime juice. The various beef bits all contributed difference textures; rare slices gradually cooked in the hot broth was soft, flank was leaner with more chew, tendons were half-melted and beef tripe was bouncy. So satisfying.
We walked pass all the Vietnamese restaurants on backtrack, and none of them offered the combo pho we had in Sông quê. It was icing on the cake on this perfect day:
A World Champ coffee + Osuga Exhibition + Good Pho = Wholesome
The years of misspent education only got me to translating Sông quê to the River Stick. I could be miles off. Then again, I felt miles away from London anyway.
Sông quê Cafe
134 Kingsland Road
London
E2 8DY
Tel: 020 7613 3222