The Journey begins at Viajante 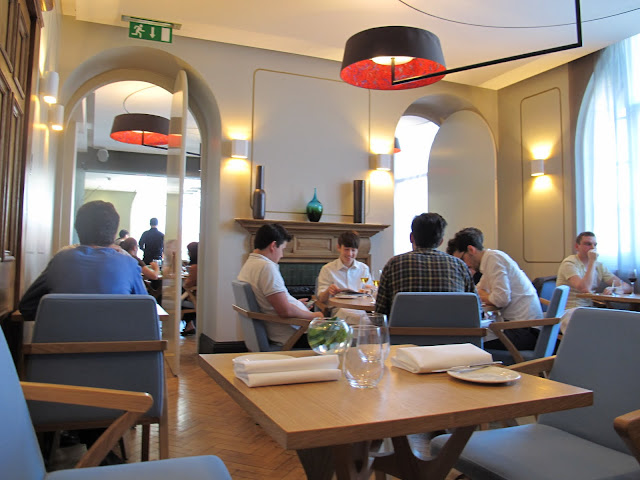 I have been hesitant about Viajante, thanks to the polarised reviews from the pros. Between a few loyal supporters that sang praises and the odd cynics who thought the restaurant was pompous, the en masse conclusion was Viajante ‘had potential’ and ‘it could easily be great’. Well I have waited long enough for Nuno Mendes to iron out the creases. Afterall gaining its first Michelin star within a year of its opening is bound to mean something, no?
Nested in the Town Hall Hotel in Bethnal Green, Viajante may convey haughtiness. Truthfully, it was anything but.  The dining rooms wereinterconnected by two arched doors; décor was clean and tasteful with energy in the colours. Most importantly the ambience was comfortable and encouraged a leisurely meal. We were seated at the opposite end of the open kitchen, and regrettably couldn’t watch the team of chefs at work. After a smiley introduction, our server presented us a slightly battered book titled ‘Voyages to Paradise’, in which hid the brief wine list. 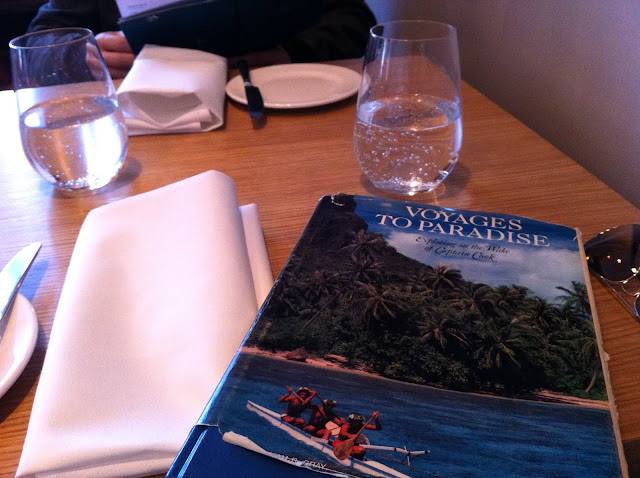 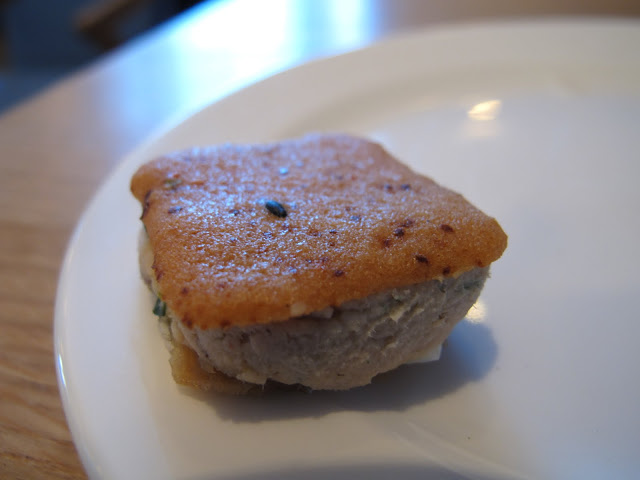 A blob chicken liver parfait sandwiched in chicken skin and sesame toast with lemongrass and coconut. That’s a lot of work and flavours to cramp into one bite, yet the flavours were expertly layered; familiar richness of the parfait was augmented by a faint hint of coconut and the uplifting lemongrass gave it a nice jolt.
Bread & Butter 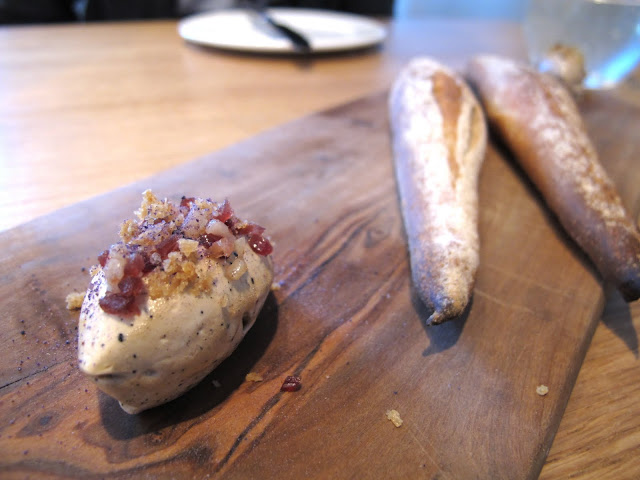 The brown butter was sprinkled with Iberico ham, chicken skin and purple sweet potato powder. Its accompaniments aside, the butter itself was so airy it was soluble, more like whipped cream infused with meat essence. The other butter was imbued with black pudding. Again it was like a piggy mousse, markedly different to the other with a deeper and more powerful tang of lard.
Lobster, Potato, Confit Egg Yolk and Saffron 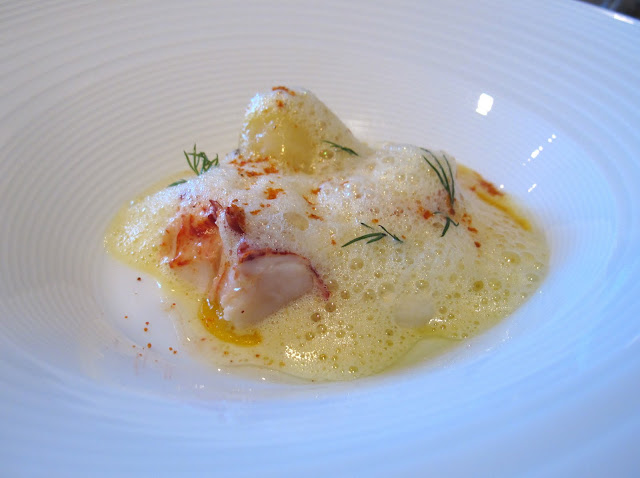 I was thrilled to find chunks of lobster under the blanket of golden emulsion. I mean, really? Really. The lobster was bursting with its natural juice, full of bounce and cooked to perfection. The runny egg yolk enhances sumptuousness and gelled the flavours together. Should cholesterol not kill us, I’d dip everything in egg yolk.
I wasn’t sure what the potato was doing there. Perhaps it added substance but it didn’t quite match with the light textures of the dish. The starchy veg didn’t spoil anything though, just somewhat out of place.
Lamb Loin and Belly with Wild Garlic and Cereals 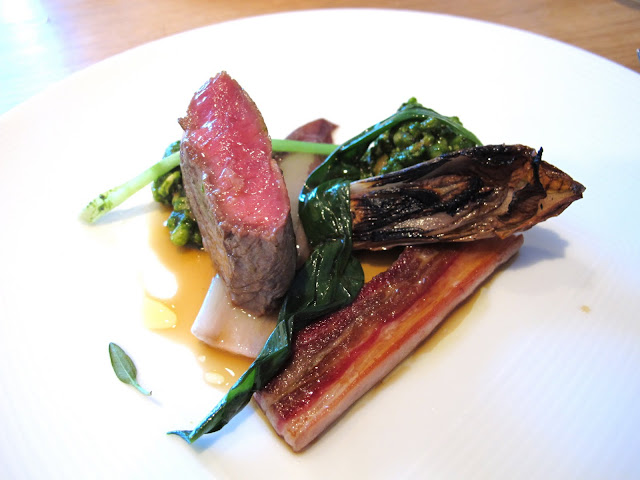 Chef presented this dish himself, spooning the lamb jus at the table. I like the new haircut.
The lamb loin was stunning; its texture so delicate it resembled veal, yet powerful in flavour as if it had been dry-aged. The lamb belly wasn’t too streaky with fat, just a generous margin to fuel the piece with the unique weaning taste of lamb, but not too pungent to overshadow the rest of the dish.
The cereal cluster with oats and pearl barley complemented well, though I think it’d be even better if served warm than cold.
Frozen Maple with Apple and Shiso 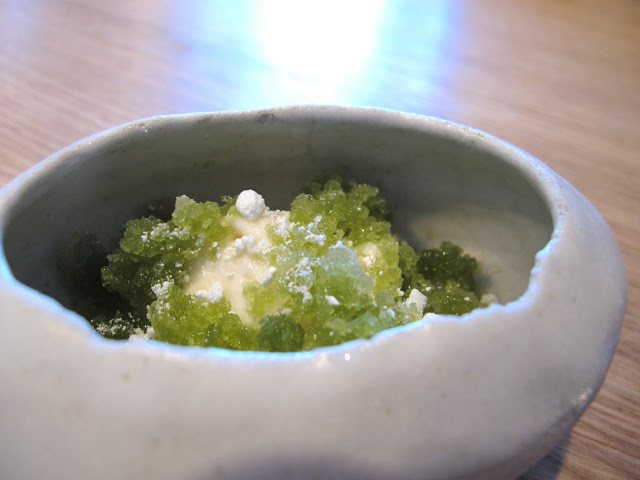 The vibrant green of the pre-dessert in the egg-shaped bowl somehow reminded me of an unfertilised reptile/dinosaur egg. Anyway…
A stimulating combination – fresh, creative and palate cleansing
Parsnips and Milk 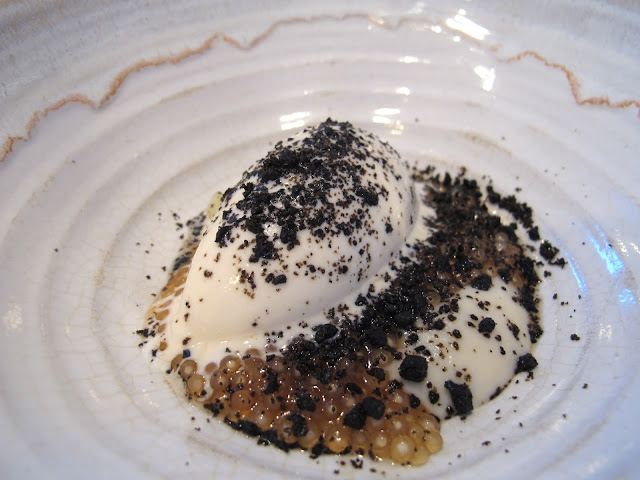 The cream dollops were bathed in coffee-soaked tapioca and sprinkled with olive powder. The dessert was orchestrated by an array of supposedly savoury flavours, and was amusingly enjoyable. Never had I imagined coffee and olive could balance each other, nor parsnip could make a better ice cream than sweet potato.
Petit Fours 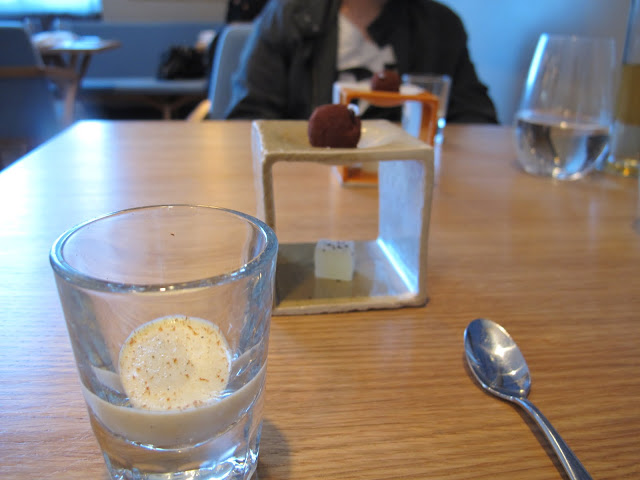 The food at Viajante is imaginative, quirky and unique. I couldn’t put a finger on which country each dish was inspired from, but isn’t that the point? The travelled chef has taken the essence and techniques from the places he visited, and re-arranges them to assemble the crème de la crème. I adored the works of culinary art by Nuno Mendes, so subtly daring and taste buds teasing. The entire experience was fuss-free, full of smiles and genuine. 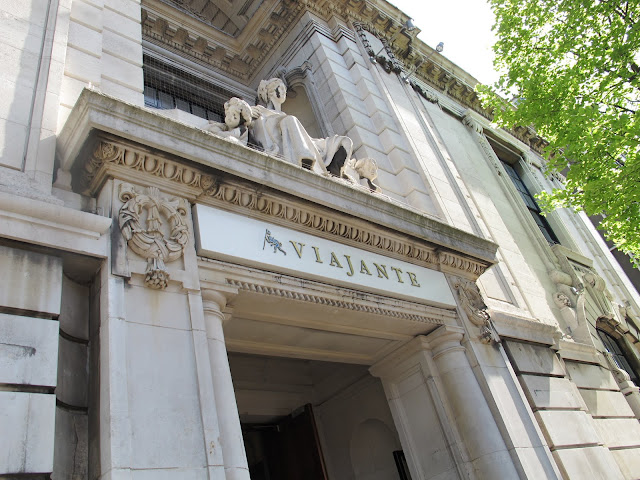 Weather has been glorious this Easter. So before we jet off for our holiday, we thought a picnic at Hyde Park with some of my favourite people would be awesome. The drinks and bubbles have already been taken care of, so I prepared the canapes and snacks. 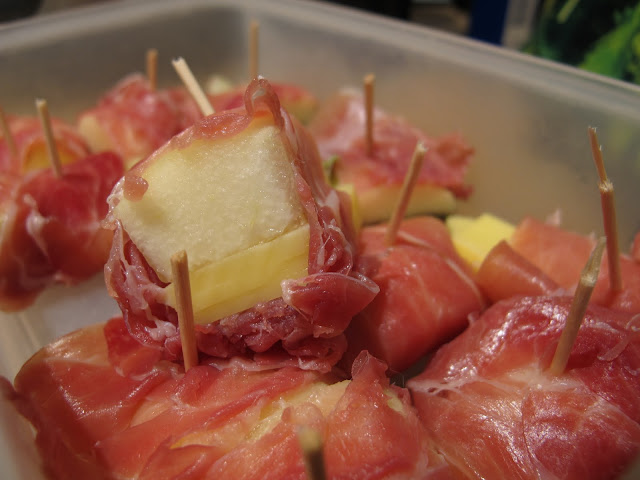 I chose the combination of Serrano ham and conference pears, which was almost ripen. I avoided the super-ripes, because they are overkills in sweetness and too soft in texture. These work just fine with a wedge of gouda cheese. For the non-cheese lovers, I substituted gouda with some salad leafs.
Prawn & Mango Skewers 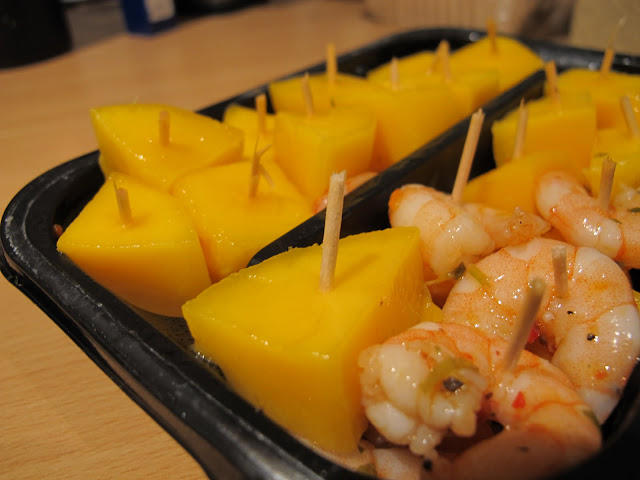 Marinate cooked prawns in juice of half a lime, 1tsp of grated ginger, 1crushed garlic clove, 1 deseeded red chilli and 1 tbsp of chopped coriander for an hour. Thread with ripen mangos. This was easily my favourite.
Sticky Squash with Sesame 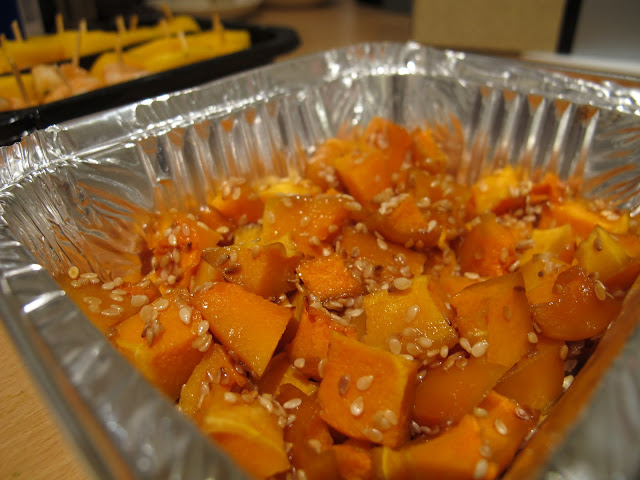 Drizzle 1 tbsp of soy sauce & honey mixture over cubed butternut squash, sprinkle toasted sesame seeds over, then bake for 20 mins. Mister thought there was a bit too much sesame and masked the natural sweetness of the squash.
Teriyaki Beef Lettuce Wraps 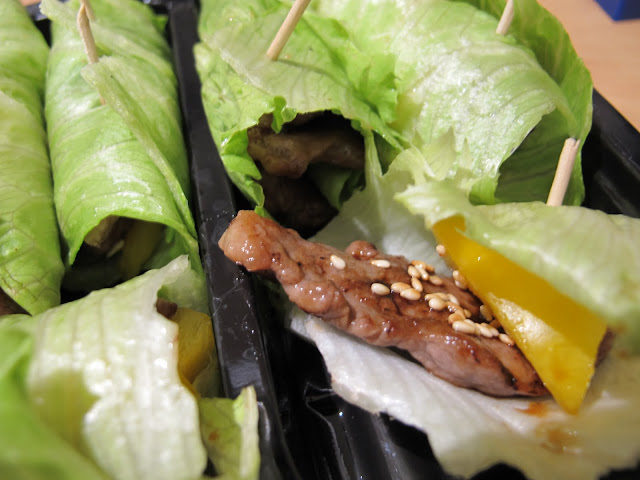 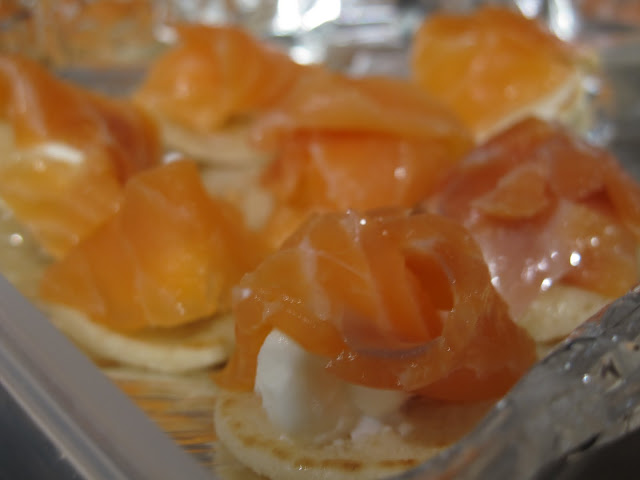 The safest recipe of all times; a generous slice of smoked salmon on a small blinis cemented by a dollop of cream cheese. Gorgeous.
I also threw a huge box of chicken wings in for good measure:) 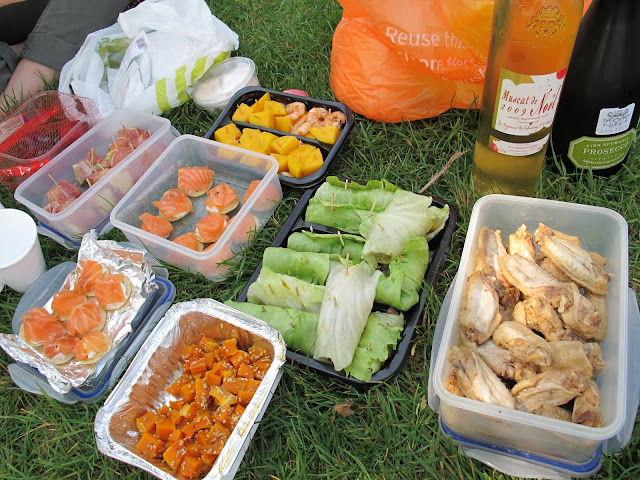 I have been so lazy in the kitchen, especially since Mister was out in Madrid for a week. Seeing he brought a good block of Iberico ham back, I felt obliged.
Silky Butternut Squash and Parmesan Soup (Recipe) 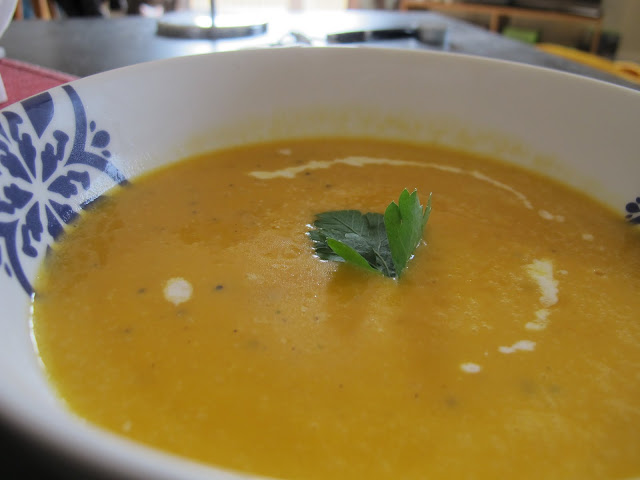 Another one from the British Larder. The simple recipe with minimum ingredients proved to be the perfect light soup for spring, especially on the breezy evenings after a day packed with sunshine. The key lies in picking a ripe butternut, and the sweating to draw the nectar from the veg.
The other half of butternut squash went into the Japanese curry the following evening.
Herb Crusted Rack of Lamb with Potatoes Boulangère and Courgettes Provençal (Recipe) 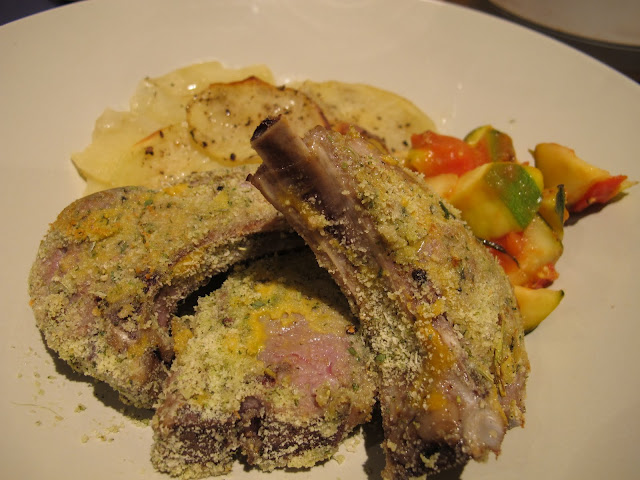 With all honesty, I think Gordon Ramsay’s recipes are hit-and-miss. They are often overly complicated with a never-ending list of ingredients, and the end product could be boiled potatoes with a fancy name. His tips, nonetheless, are quite handy.
The meat counter at Waitrose ran out of full rack of lamb; so I resorted to lamb cutlets, trimmed excessive fat and reduced the cooking time by 2 mins.
It would have been perfect had the lamb been leaner, but still the meat was tender, deep red in the middle and oozed aroma from the herbs. Mister thought the courgettes were appetising with a healthy zing.
Coconut Sorbet 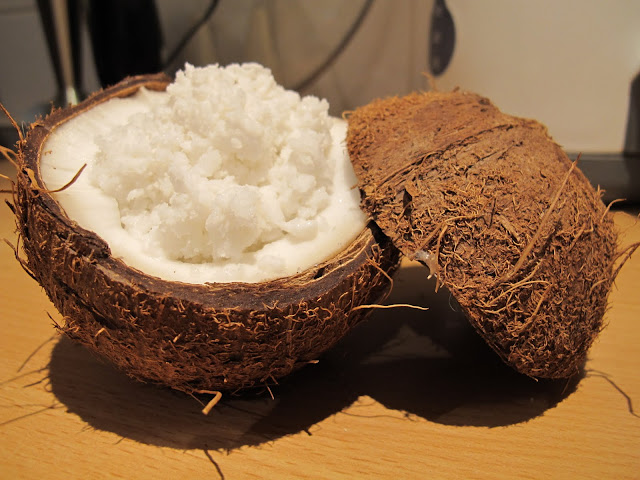 I have never opened a coconut before, the only reason I bought one was because the lady in front of me at Waitrose bought one. It looked fun. Mister opened it with relative ease *kiss biceps* (after I googled ‘how to open a coconut’).
Simmer 150ml water with 80g sugar for 5 mins and then mix in 60ml coconut milk, followed by the chopped/shredded coconut. 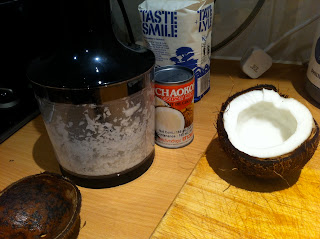 (I used the coconut from the lid because it was easy to extract, I am guessing dried coconut would work too. 30g?)
Then the rest is the same for all sorbets: freeze the mixture, blend until slurry and freeze again. Serves 2-3.
at 04:53 1 comment:

A Sunny Afternoon at the London Borough Market 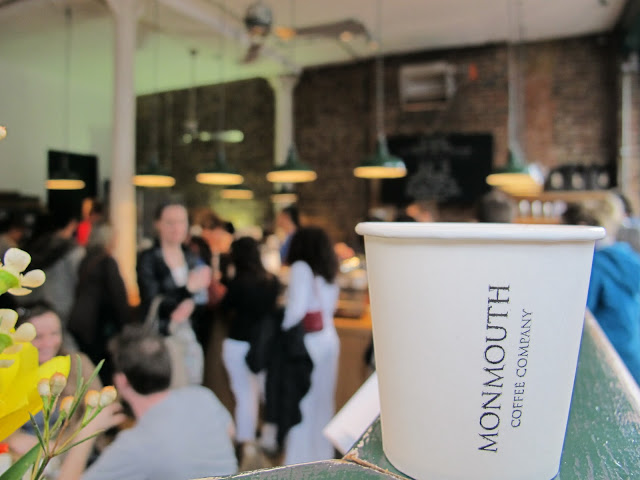 Who doesn’t love the Borough Market, right? It’s a concentration of the hippest and most authentic fare from people who care about food.
Monmouth Coffee
There are queues everywhere. Monmouth Coffee is no exception. There are more on the menu here compared to Prufrock at Present; it offers filtered coffee and roasted espresso varieties. I was battling between a cappuccino and flat white, and the latter won the fight as it was well pass 10am and I wouldn’t like the Italians to snigger at me. It was serving Guatemala Antigua coffee on the day. 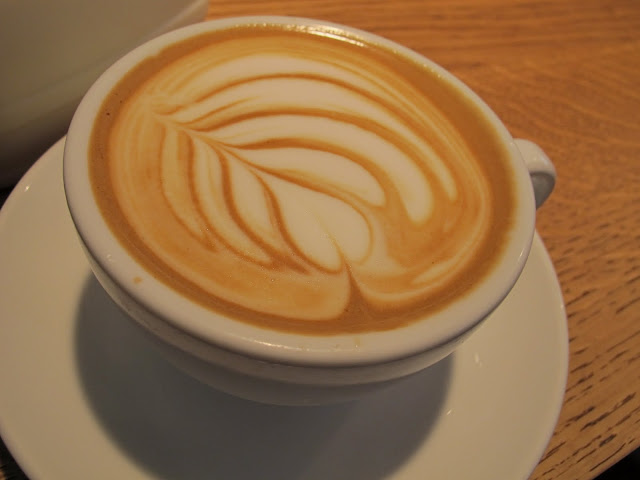 It has a full and velvety body, a rich and lively aroma and a fine acidity. The milk was only just slightly foamed, retaining its density while adding extra smoothness. The essence was not as spicy and overpowering as the Square Mile blend I had previously tried, but I prefer the long-lasting subtlety of this one. 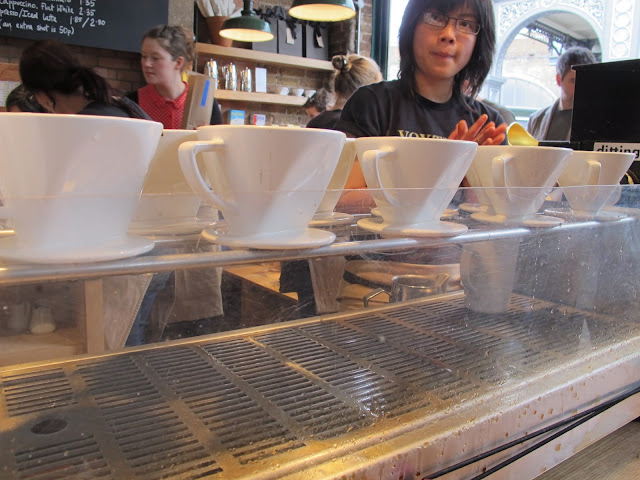 Mister went for a filtered coffee, which was freshly grounded and filtered on one of these. The coffee was much lighter bodied compared to mine, and inevitably restrained in aroma.
Roast on the Go 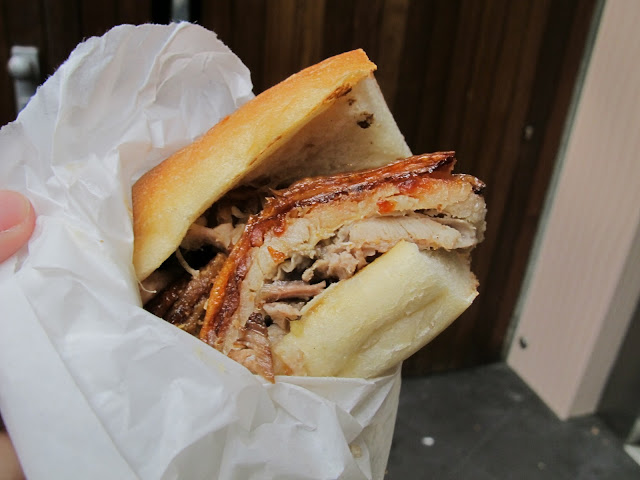 Kept telling myself to try a different stand but always end up helplessly joining this queue for the famous Pork Belly with Apple Bramley sauce. The shredded juicy pig with a generous wedge of pork cracking on a thin sheet of meekly sour apple jam, it’s so satisfying. The restaurant upstairs overlooking the market, however, has been earning some tepid reviews.
Real France 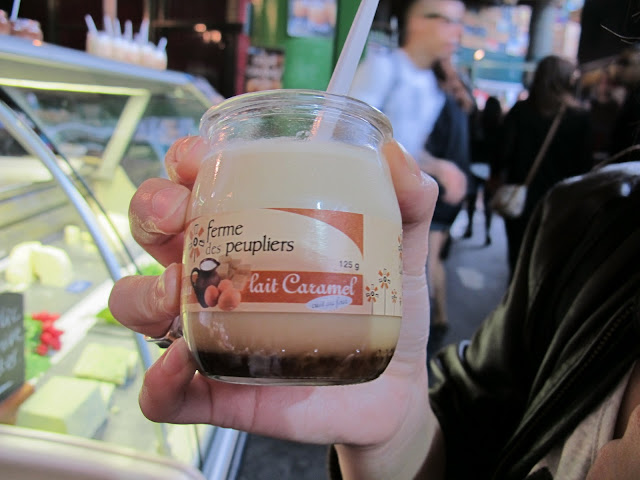 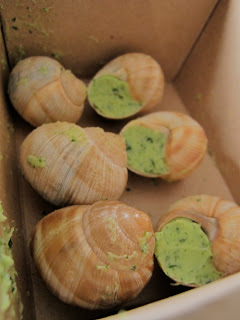 I couldn’t find enough space to fit the duck confit sandwich after my sampling rounds for cheese and truffle products, but we did buy some snails as tonight’s appetiser from the French food specialist. I was delighted to have found cooked snails in cans to, maybe I can attempt the Great Heston Blumental’s snail porridge recipe… Mister can smell food poisoning on its way. 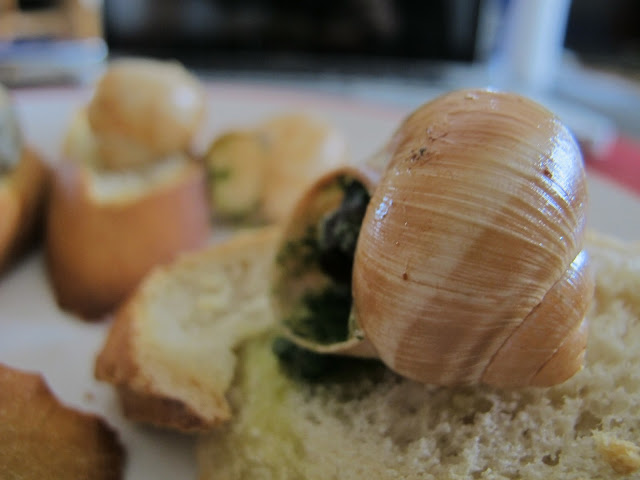 The snails were plopped in the oven for 10 mins and served on fresh baguettes. Hmmm….
Shellseekers 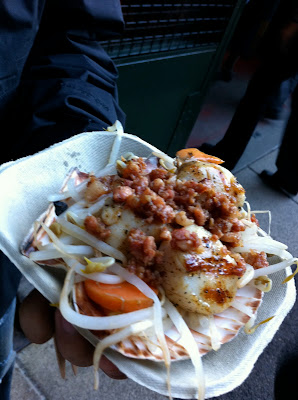 These are so evil. The smell of grilled bacon spreads around the market to lure people into the queue. I think it was £4 for 3 scallops on a bed of bean sprouts, topped with chopped bacon. The scallops were plump and meaty, though not the sweetest I have had.
There is so much more for next visit: goat’s milk ice cream, bread in a pot, the chorizo bap from Brindisa, Fish! Kitchen, Applebee’s fish wrap… 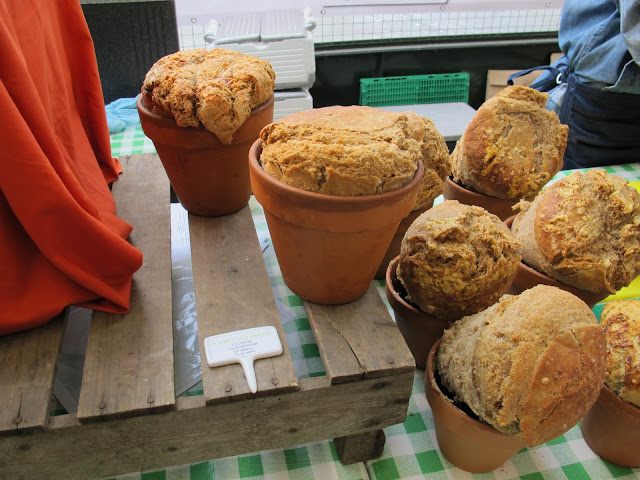 8 Southwark Street
London
SE1 1TL
You may also like: Selfridges Food Hall, Prufrock Coffee at Present
at 05:43 No comments: