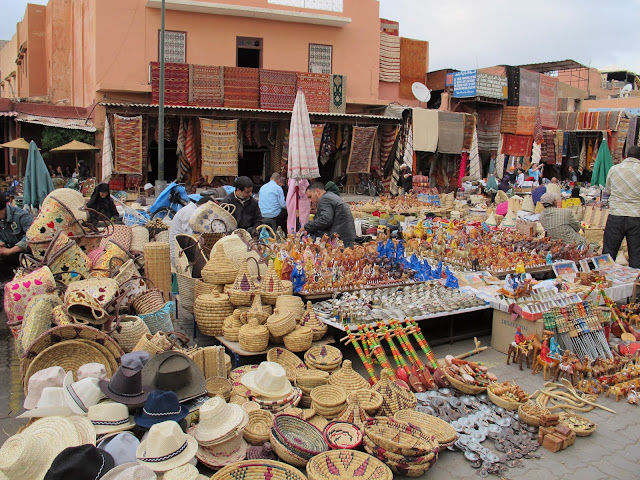 I was too excited to set foot in Africa. Having spent the coldest Christmas in the Arctic, I was determined to kick start Spring in the Sahara Desert. So the plan was to explore Marrakesh and then conquer the Southern oases and Sahara. And it is in Morocco that my 5 years of French actually made itself useful.

Our arrival was greeted by a beautiful sunset at the airport and of course the taxi driver arranged by our Riad (Moroccan guesthouse). The riad was in the Medina (historical city) near the famous Djemaa el Fna, which was closed off to vehicles in the evening. It was 8pm and the Square was in full blown with food stalls grilling brochettes, carts selling orange juice, vendors with local produce and crafts, henna artists and people with monkeys and snakes. 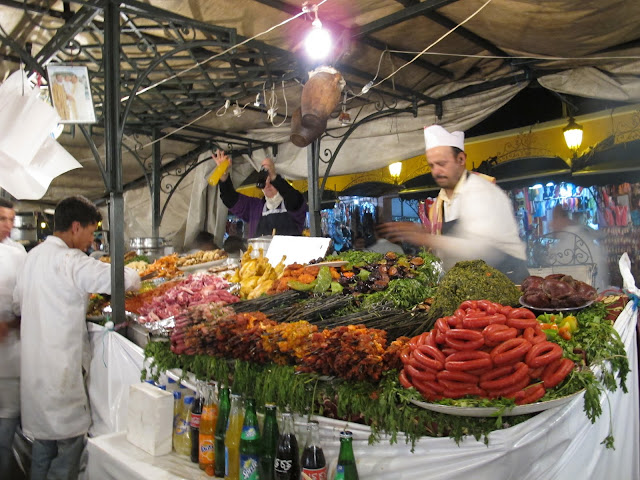 After an introductory tour at the beautiful, tranquil and tasteful riad, we hit the Square for dinner. With over 50 stalls selling grills, tagines, lamb heads, snail stews, Moroccan kebabs and deep fried dishes, touts were hardcore in sitting us down. We settled for grills at No.1 because it was 70% full with half locals and half Europeans (and I needed more time to work up my courage for the lamb head). 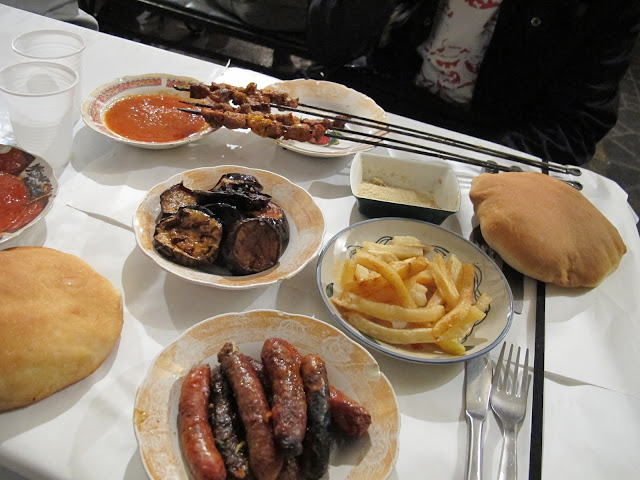 It was pretty bad. The fries, beef sausages and grilled lamb cubes were cold. None of the food was cooked to order, the cook just grilled away, set the food aside and servers dish them out accordingly. The aubergines, albeit flaccid and burnt, was well-seasoned. Mister liked the harissa sauce, sour and spicy; I could only manage the sweet tomato puree. With a large bottle of water the bill came to 90dh, our server asked for the remaining 10dh as tips. It’s okay, it was an experience.

We wandered around the market casually, saving the purchases for souks the next day. The lanterns, porcelains and hand-made rugs were mesmerising to say the least, but there were also too many fake football shirts, poor-quality 80s-style cotton clothes and a mix of Moroccan shoes on offer. Culture shock? You bet. 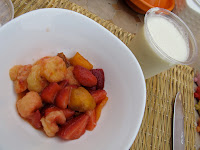 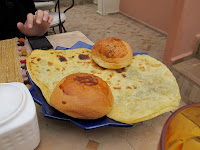 Breakfast was fresh fruits and yoghurt, Morrocan brioche and pancakes, which was a flat piece of fried puff pastry, and fresh orange juice. I fell in love with the yoghurt. It was deliciously sweet and I thought I could taste a bit of egg-white? Okay I miss my scrambled eggs, but I wouldn’t mind having this breakfast 4 times a week.

We returned to Djemaa el Fna choosing a café that overlooks the Square so we could observe the stalls pop up in the evening. And that’s when it happened. Right before our eyes the explosion shook the grounds and deafened our ears, black smoke rose from Café Argana and the terrace cafe collapsed. Everything fell into slow-motion for a split second before hundreds ran towards the café while we retreated in opposite direction. A local explained it was butane gas, we didn’t know better. Shock, fear and helplessness. 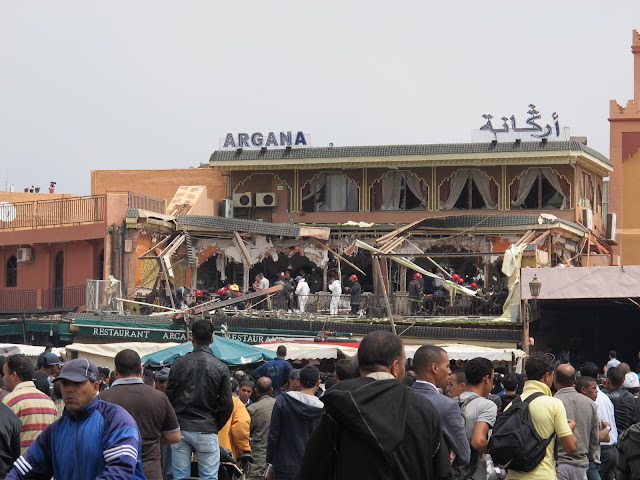 Being told it was an accident, we decided to continue into the labyrinth of souks (markets) after a quick break in the Riad. I am sure some stalls sell better quality crafts than the others, but to us, they were all too similar. There were hundreds of them. 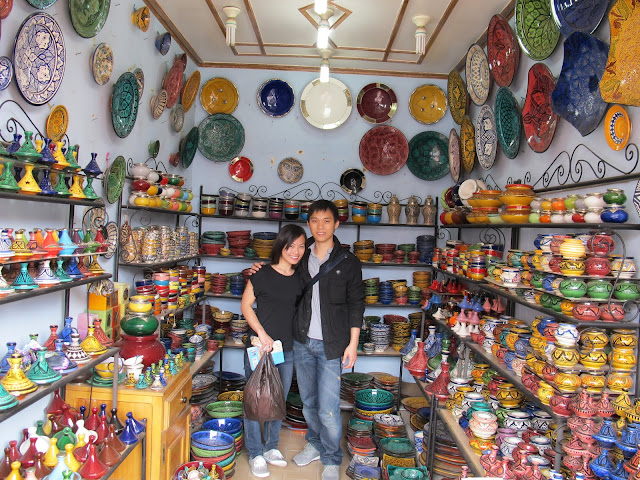 I did, however, buy some Moroccan porcelain plates. It was our first purchase and first haggle. The merchant was too good, and we were too inexperienced. Though knowing we bought at a much higher price than a good bargainer would, it was still a price I was prepared to pay. Lunch was taken at a restaurant just off the Square, Chez Brahim, recommended by the Riad host. 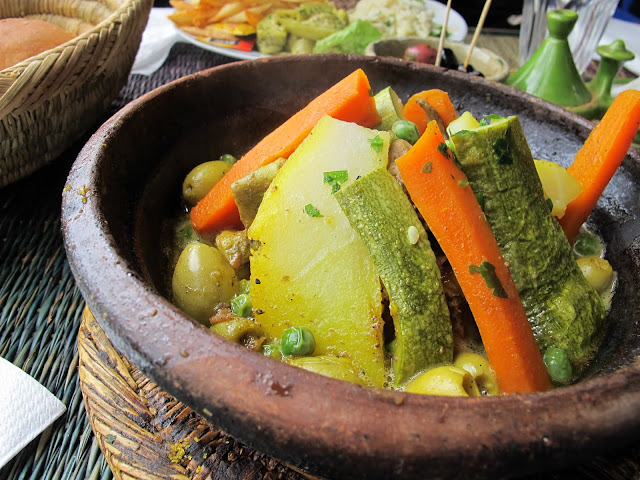 It wasn’t until we returned to the Riad that we learned the bombing was actually a Terrorist Attack. Our mood dampened immediately and shivered at the thought of the danger of wandering around the souks all day. Not keen to leave the safety of the riad, we used the in-house Hammam. We sweated in the steam room for 20 minutes before showering and applying the local savon noir (black soap), with a bit more baking we washed off the soap and began scrubbing away with a scrub glove. Oh it felt good. So very good. 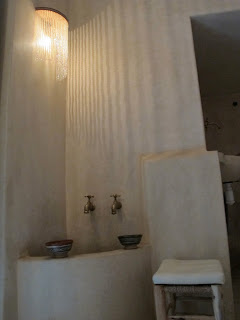 The locals obviously do it differently, with buckets of water as opposed to showers; in public Hammans separating men and women as opposed to a private room. There was no way I would walk into the local ones, they are literally dark holes in the back alleyways.

The next day we escaped the Medina and visited the Kasbah region with the Royal Palace and Saadian Tombs. I own up; Moroccan and Islamic history is complicated, I could grasp the concept but had no idea which leader took over whom during when. I didn’t go into any of these sites. These stalls outside the Medina are much less aggressive, though we still received our ‘Konichiwa’ from the locals; more genuine hellos as opposed to come-and-buy-things-from-me. I guess the Japanese do not adopt the bargaining culture and are generous in tipping, hence making them a huge hit with the locals.

Local: You from Japan?
Us: No, Hong Kong.
Local: Hong Kong in Japan?

Honestly there wasn’t much to look at. We booked ourselves a Moroccan Massage at L’Alhambra. This Spa is easier to locate than any of the listed ones in the Medina. It had signs on the right side of the main road from the Saadian Tombs. The duo packages looked good. The prices are cheap by Western standards, but totally off-limits to the locals. Oh the bliss of a full body massage plus mint tea relaxation afterwards. 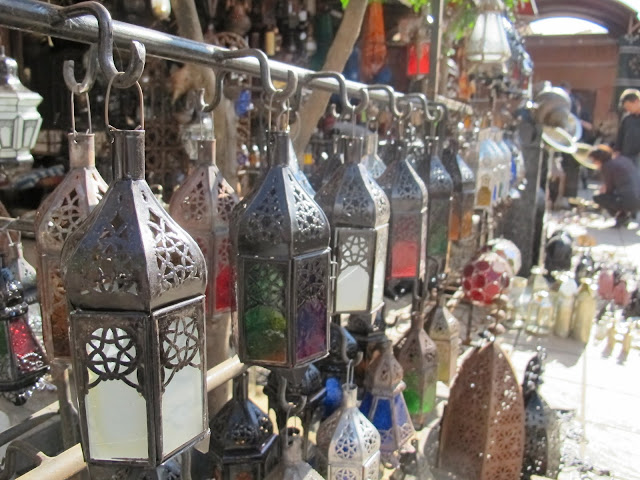 We were building positive feelings towards this city, wandering around the Kasbah feeling the sunshine. A vendor successfully lured us into his stall, explaining all the natural Berber toiletries and spices to us. We knew we had to buy something at the end. Mister picked up the skills at no time and bought at a 1/3 of the offered price. I was so proud of him.

Then some idiotic street rat spoilt it for us. He claimed some road is closed, pointed us to another direction, followed us for 10 metres, tried chatting and asked for a tip afterwards. Fine. Judging he was about 16, we thought we’d give him some loose change (for following us?!) to buy himself a bottle of coke. The rat had the audacity to ask for a 20dh note and said the coins are nothing! Do we look stupid?! I snapped the coins back from him and said that’s nothing. As we walked away, he begged for the coins. The route he pointed us, btw, led us to nowhere. 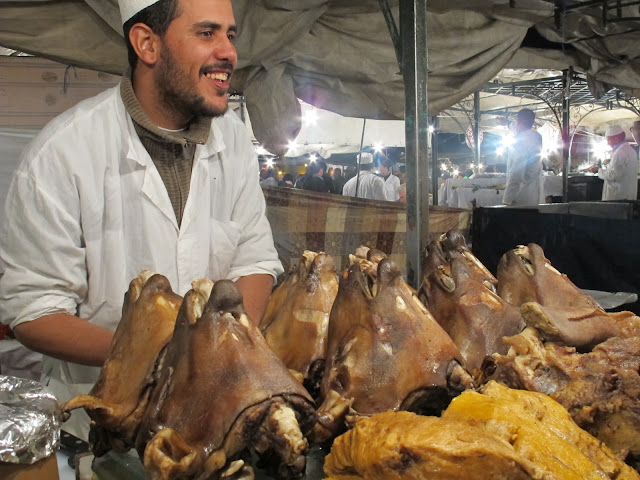 For dinner, I had the courage to try lamb’s head at the Square, which re-opened. I thought it was gorgeous, silky textures from the collagen and tender fibres, it was not dissimilar to the Chinese offal stews. Mister’s tagina was good, though tagines were better. The group of British youngsters had to guts to order a lamb brain. It looked awful and their excruciating expressions reflected it.

Moving on from Marrakesh to the Southern Oases, we hopped into a taxi and asked for ‘La Gare pour l’Autobus CTM’, which is a government run long-distance bus service. Instead we were taken to La Gare Routiere, where local private bus companies worked hard to sell us their tickets, reassuring us that it was faster in a better location with more departure times. We gave in.

We bought the ticket, found the bay with our bus (mostly filled with locals, then a man grabbed our bag and asked 10dh for his service. We only had 200dh notes. It was ugly; I offered him British pounds but he wanted Euros. A French woman saw the deadlock and gave him a coin to shoo him off. The bastard then spoke in French to say the French leads an example of a tourist and some random abuse. Fuck you. I was furious. For the record, we paid the French back at a mid-way stop after breaking the notes.

CTM sold one-way tickets for 80dh pp, private costs 75dh, plus a 10dh tip to the seller and a 10dh forced tip to the person who led us onto the bus. WTF?!

Thank God the 3 days in Marrakesh is over. And I have the Sahara to look forward to. 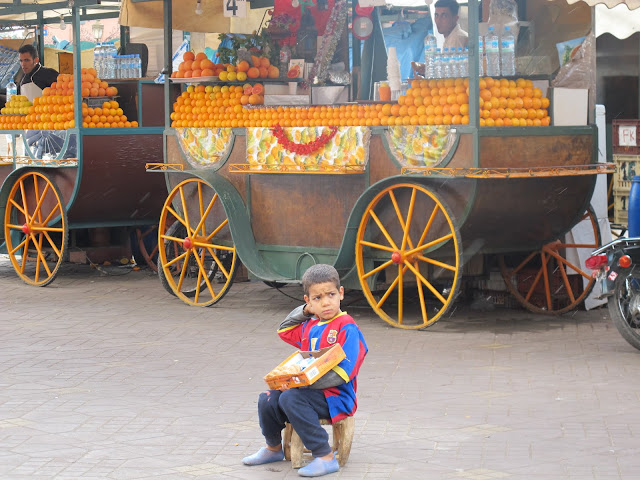 Sometimes it's not about what we have been forewarned by travel guides. Take the orange juice for example, all travel guides would tell us to insist on having the juice freshly squeezed in front of us, otherwise the vendors water the juice down with sugar water. But we couldn't ask them to squeeze it fresh; the counter was hidden behind the orange displays and they already starting pouring from the jug the moment we made eye contact. Maybe I just need to toughen up!


Looking back some Moroccans were genuinely friendly. Even the passerbys on mopeds greeted us with 'Konichiwa'. Asians stood out from the crowds and we felt like celebrity. Mister was dubbed Berber Jacky Chan by a few locals. But then there was always an inevitable tout or tourist trap that ruined the day.