El Gaucho at the Argentine Barn 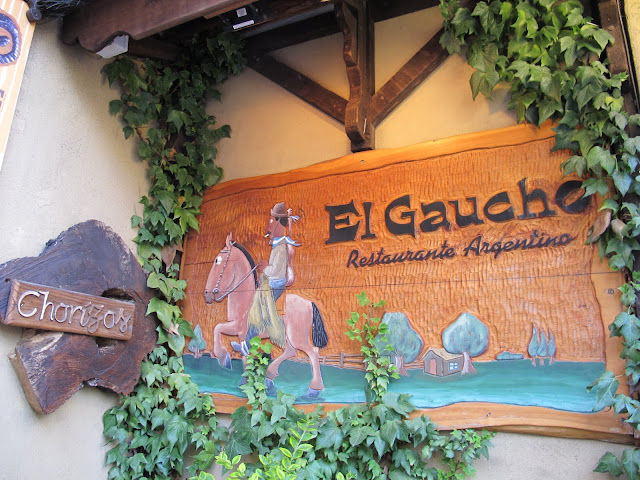 For the 6 years that I lived in the South Ken & Chelsea area, I used to walk pass El Gaucho on a daily basis.  It is just so very strange that I never paid a visit, despite the positive reviews, lively atmosphere it portrays and limited choice of restaurants in the neighbourhood. And the strangest of all is how I trekked all the way from East London on a weekday evening for this steakhouse…
This cosy Argentinean Steakhouse is not to be confused with the contemporary chain Gaucho. Instead this rustic, earthy El Gaucho is hidden in the basement of Old Brompton Road, and claims to be the first restaurant serving steaks from Argentina since 1990.  The décor lives up to the cowboy “gaucho” theme; it looks like a barn in a ranch. I think it’s a one-man-show in the modest open kitchen, and Chef looks like Iker Casillas from Real Madrid 15 years later. 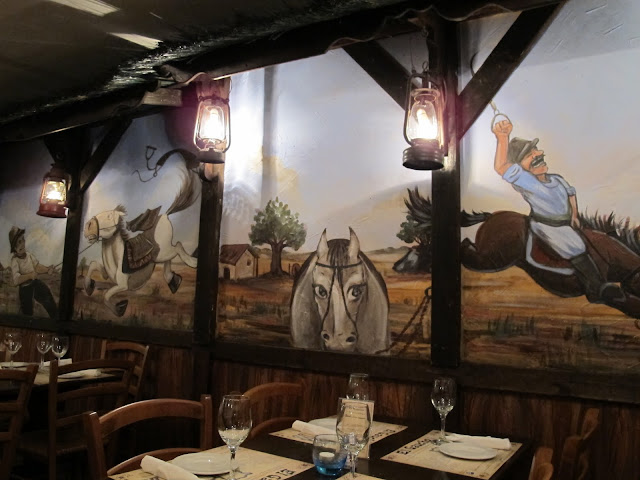 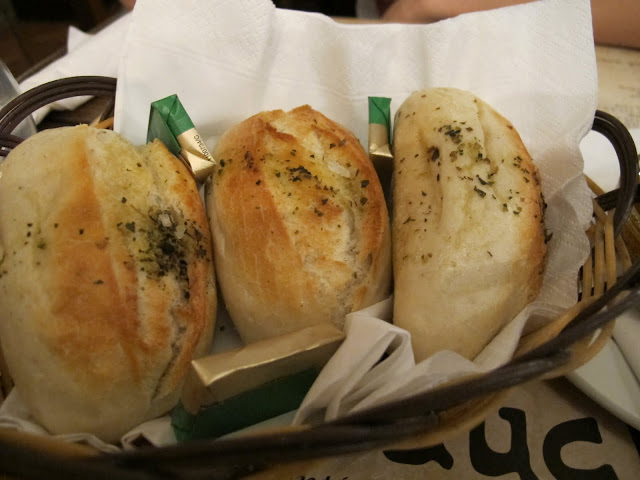 Bread rolls were sprinkled with dried herbs and sea salt. It was nice, but since they were charging me for it, perhaps at least serve them warm?
14oz Argentine Rib-Eye Steak 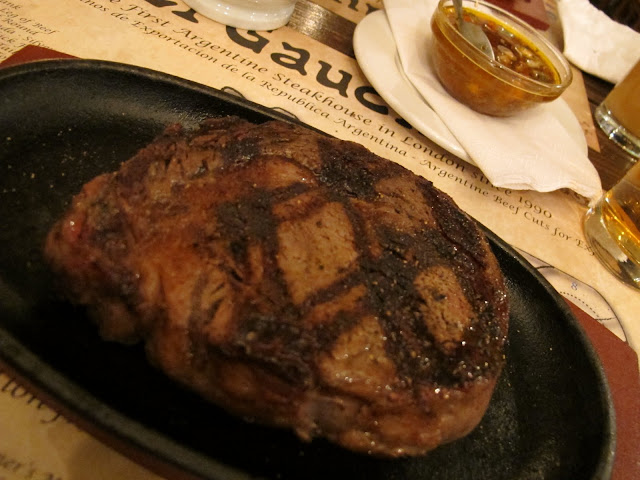 I didn’t opt for the more traditional (authentic?) Argentine beef flank or ribs, and tucked into a magnificent slab of rib-eye instead. Medium-rare please as Argentineans tend to have their steaks cooked more thoroughly.
I was excited by the sheer thickness of the meat; the sizzling grill pumping the whiffs of beefy scents was just a bonus. 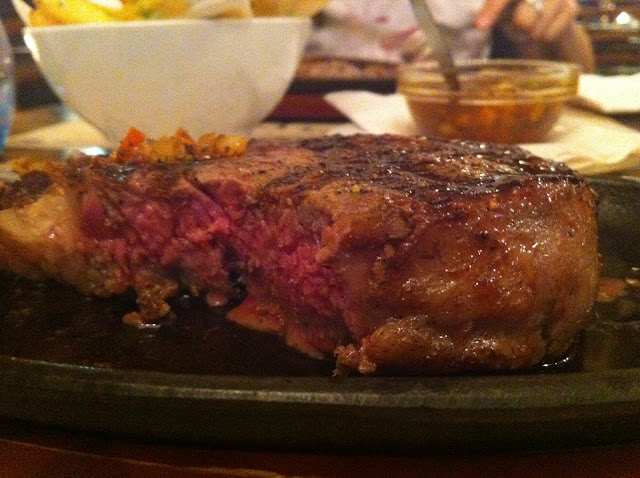 I loved it. It was bursting with beefiness and packed with f-loads of meat juice, beautifully grilled with a slightly charred edge and seasoned with simplesalt and pepper. Great stuff.
Frankly I don’t know if the sizzling grill was a definite winner. For 14oz, the second half of the meat inevitably became medium-done by the time I got to it. However it was still warm and juicy with a melting rind of fat, which made it a bloody good medium-done piece. The steak would still be red in the middle without the grill, but the cold hinging opaque fat is hardly appetising. You gain some and lose some, right? 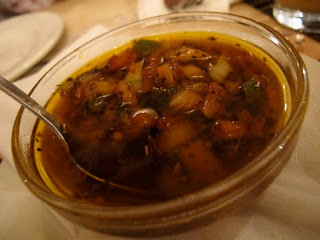 There was nothing barbeque about the barbeque sauce, more like salsa with larger chunks onions and peppers with much more oil. It wasn’t my type of thing, as sauces are never my type of thing. Mister liked it though.
Argentina prides itself on high quality beef as the cows live in free nature with no stabling, feed on natural grass as opposed to the corn and hormones mix the Americans feed their animals. So the real Argentinean steaks are undoubtedly leaner with a natural sweetness, just enough fat to enhance the full-blown bovine flavours and tenderness. American beef, by comparison, generally tastes slightly “watered down” with less concentrated juice and a bit too much fat. Having said that, I do think the high-end steakhouses that stock meat from free range cows sit on the same rank as the Argentinean ones. Does El Gaucho serve the top-end Argentine steak? At £16.90 a pop I have my reservations, but it was one good steak.
Papas Fritas a la Provenzal 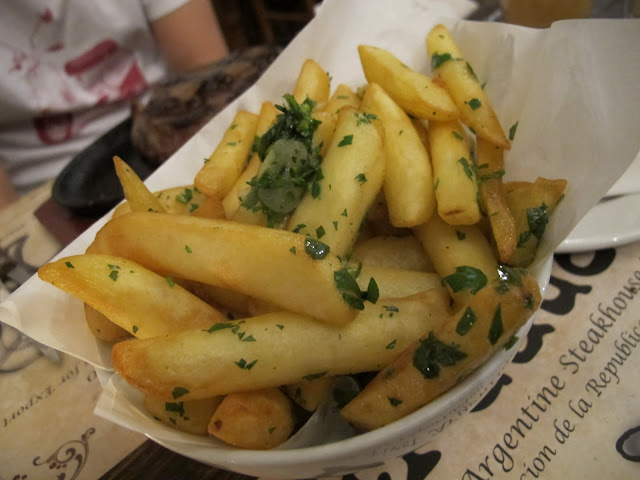 This translates to fat chip with garlic and parsley. Good chips.
We were one of the 2 tables at 7pm this weekday evening, but were joined by 3 couples nearing the end of our meal. Still far from the jovial buzz many described. Unlike Hawksmoor, Goodman or even JW, El Gaucho is a completely different kind of Steakhouse, also very serious its meat, but totally easy about the place. It's a nice change.
El Gaucho