Mary had a Little Lamb - I ate it 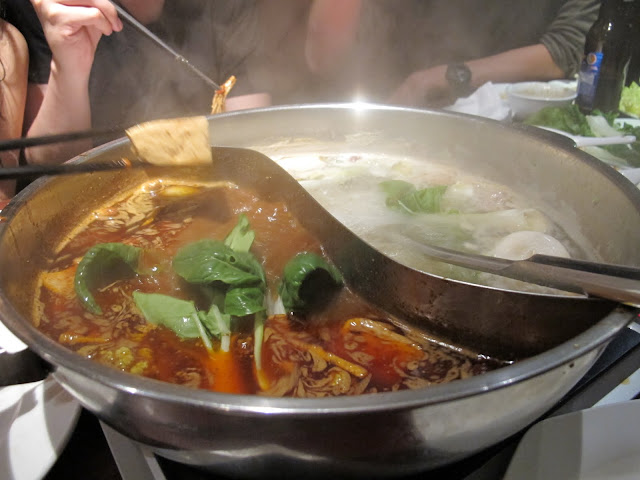 Hot Pot, or Steamboat as I have recently learnt, is as Chinese as it gets; family and friends crowd around a huge bubbling pot of soup, dipping raw meat into the boiling soup and eat straight from the pot. I love it.
According to Google, Little Lamb is an international brand that specialises in a range of Chinese food products and restaurants. I wouldn’t have guessed seeing it looks just like every other restaurant in China Town. The 5 of us qualified for a small room to ourselves, which I appreciated the privacy until I discovered the limited ventilation in the basement. So this is how a har gau feels in a giant steamer…
There was an a la carte option, or a £23 per head that includes 5 dishes each plus one soup base. We weren’t sure if we could do 25 plates among us so we started with a la carte.
Ying-Yang pot 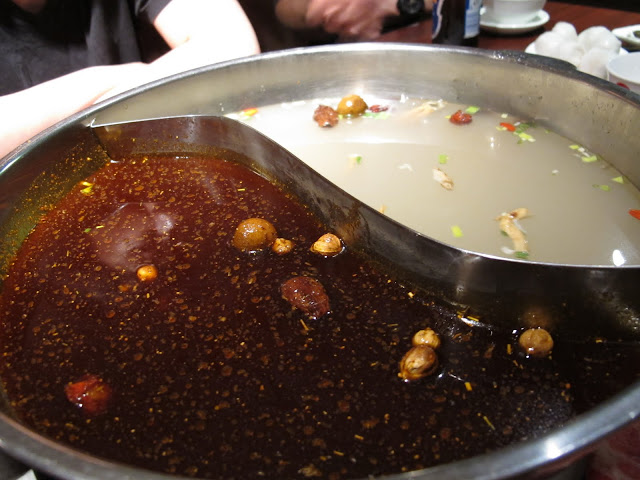 If I had it my way, aka the Hong Kong way, I’d have satay on one side and coriander with preserved egg on the other. But it’s Mongolian style here, so the deep red was constituted of chillies, spicy herbs and chilli oil and the milky white soup was mild broth with Chinese medicinal herbs.
Despite the colour, the soup wasn’t unbearably hot; it flared and burned after a while, but most of the time the heat just lingered behind the food, as long as I dodged the explosive herbs. I have seen Szechuan pots with more chillies that soup. The gentle broth was verging on the tasteless side, it could be the result of excessive chilli soup, which perhaps silently numbed my senses and caused irreversible damage to my taste buds. According to Mister, the mooli slices extracted theflavours from the medicinal herbs like a sponge… I didn’t notice.
Beef 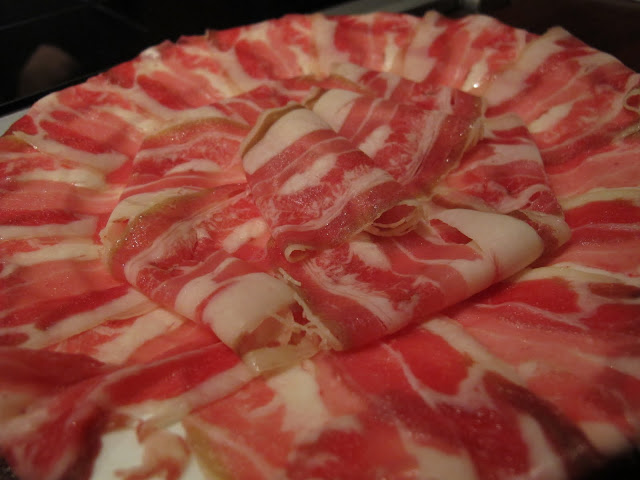 The streaky beef wafer was ideal for hot pot. A quick plunge in the pot sees the meat faded to a scarlet pink, dunk in the raw egg and peanut sauce to wash some of the chilli oil off, and the meat slowly dissolves in mouth.
The beef itself is mediocre stuff, nothing like the slices with marbling fat or hand-cut fillet in Hong Kong. But it’s good enough to satisfy the dunk-dip-eat ritual.
Lamb 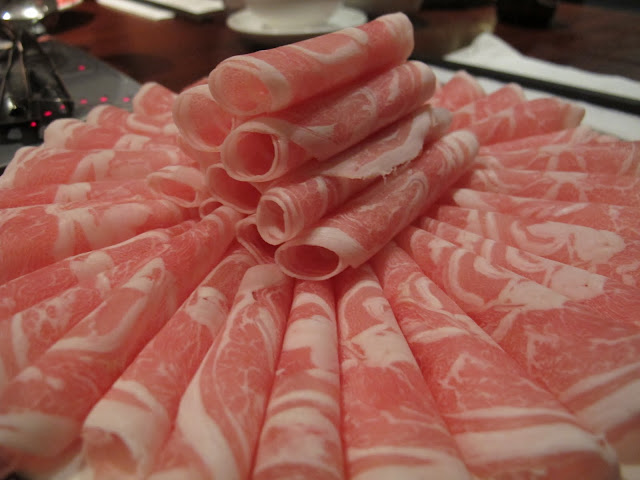 I was hoping to see different types of lamb meat on the menu, but this was the only lamb item. Given the Mongolian theme, I was slightly disappointed. Despite the visible streaks of fat, it lacked the distinctive weaning tang.
Tiger prawns 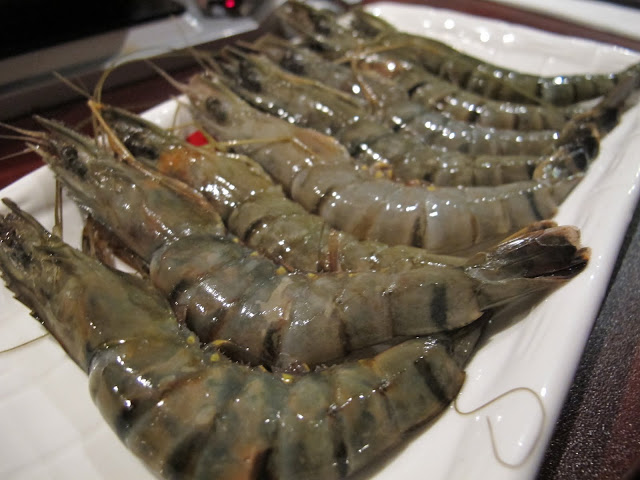 Nah. Definitely a fail. Frozen prawns should remain unwashed until it was ready to be cooked; otherwise they become mushy, like these.
Squid balls with meat filling 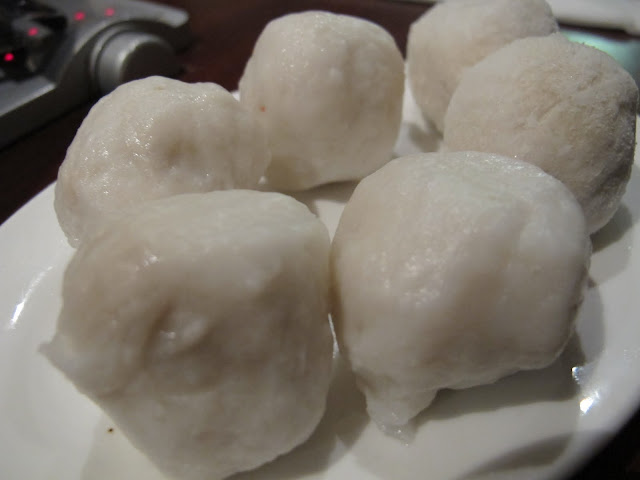 Could have been fish balls, I can’t remember. These were the size of ping pong balls and full of bounce, with a bit of juicy minced pork in the middle. It worked okay, but I would recommend a cheese filling with flying fish roe; the cheese melts into a runny centre mixed with small roes that pop with every chew… isn’t that so much better?
Squid – Dried Beancurd Sheets – Shitake Mushroom 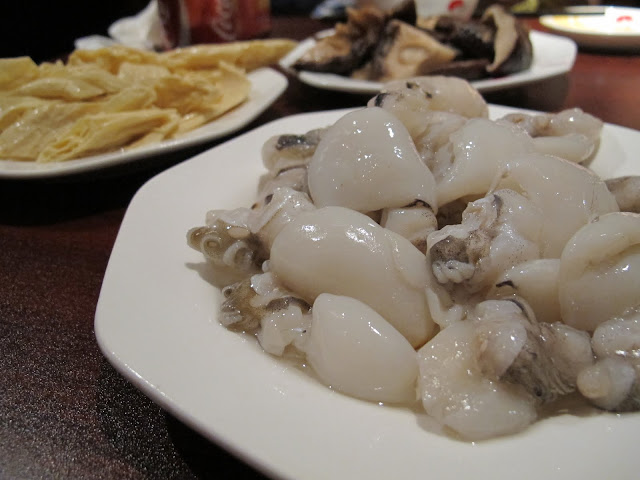 The baby squids were still frozen on the plate, and they shrivelled to the size of a 5-pence coin (if that) after cooking, tasted of nothing and felt like chewing on a small of rubber. Bring me thick slices of real squid please.
The beacurd slices shouldn’t be served so lifeless, damp and tasteless. What they should do, is soak the dried sheets till soft, then deep fry them again to utter crispiness. The crusty rolls soften the moment they hit the boiling broth, soaking up the essence of the soup – truly heavenly.
As with the mushroom… people eat fresh shitake mushroom with hotpot, not the ones that had previously been dried. It’s pure laziness really, even Sainsbury’s stock the fresh ones as one of their exotic ranges.
Fish fillet 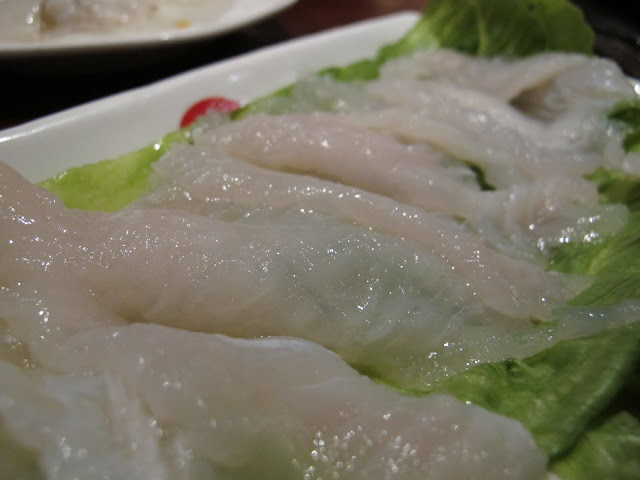 Fish in hot pot is okay, they tend to flake away and disappear into the depth of the pot though. Eel slices hold better.
We also threw in lots of veg for a balanced diet, and rounded off with some vermicelli and Mongolian ho fun. Frankly none of the food was worth writing home about, but it was three and a half hours well-spent.
As you can tell, I am particularly fastidious about the fare, since the kitchen doesn’t have to do any cooking, they can at least get the preparation right. Otherwise what am I paying for? I understand a lot of it has to do with availability of resources in the UK, which is why I opt to do hot-pot at home. Afterall Little Lamb has done little else than buying the stock from the supermarket next door, remove the packaging and transfer the contents onto a plate. The bill came to £32 each, and isn’t this easy money? I can do better with a tomato king crab soup base, fresh seafood from Billingsgate and the same quality meat and double the quantity, drinks and condiments included, all for £10 per head.
Little Lamb
72 Shaftsbury Avenue
London
W1D 6NS
Tel: 0207 287 8078
You may also like: My Old Place, Dumpling Legend, Royal China