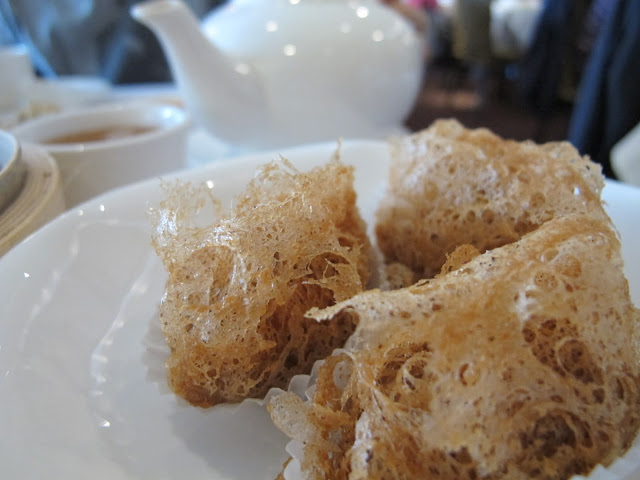 During the 6-week refurbishment, I had to resort to Lotus for dim sums on that gloomy Sunday, and that was an unfortunate experience. So you could imagine my relief when Royal China finally reopened with a bonus 25% off total food bill (until the end of May).
Frankly I thought the renovation work was barely noticeable. Yes they made the bar longer, took the glass dividers down for more open space, and perhaps plastered more gold paint on the wall? Mister is absolutely convinced the fish tank was a new instalment, I remain doubtful. Anyway. We ordered the usuals.
Prawn Dumpling – Har Gau 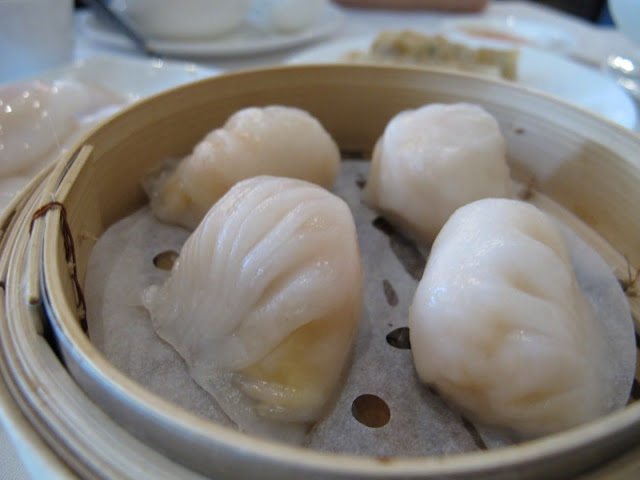 These don’t look right. Generally I don’t mind bite-size har gau as they are traditionally small. However I do have issues with little dumplings and thick shells; the skin should be slightly translucent and shiny. The prawns were tasty and bouncy, but dry… lard is inevitable in good dim sums.
Yam Paste with Dried Meat 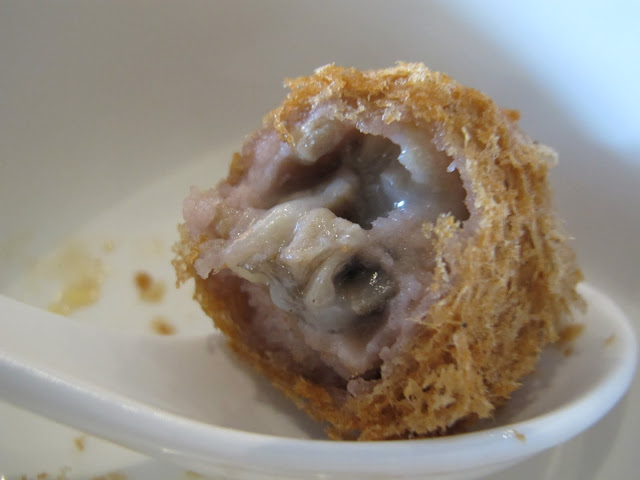 Despite the 30% reduction in size, the pastry was fluffy and brittle with a dense layer of creamy taro paste and meat filling. Lip-smackingly scrumptious.
Roast Pork Puff 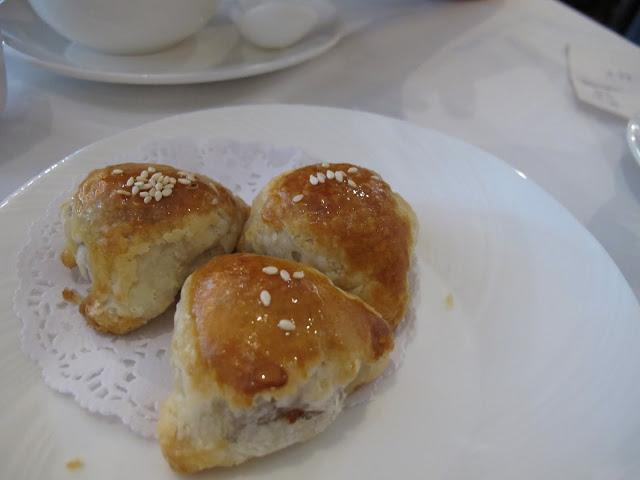 Umm…it pains me to say this, but Lotus does it better. These were half the size they should be, with a meagre filling of roast pork sauce and if I concentrated very hard, I could find bits of char-siu. The pastry was undercooked that left pale edges; it didn’t melt away like it used to.
Prawn Cheung Fun 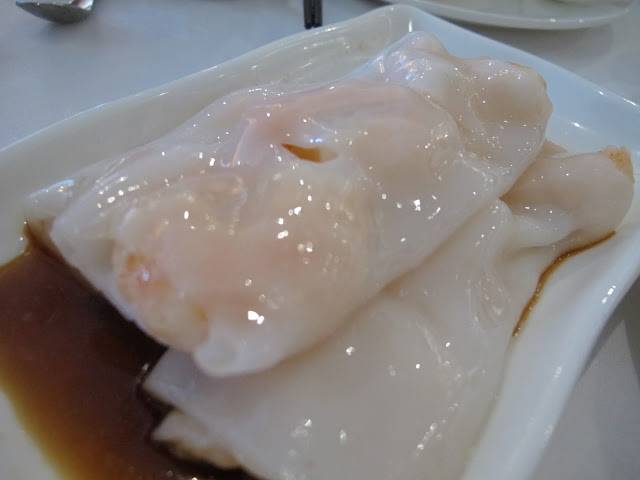 The cheung fun could be thinner, the sweet soy sauce could be better, but all-in-all this was passable.
Vietnamese Spring Rolls 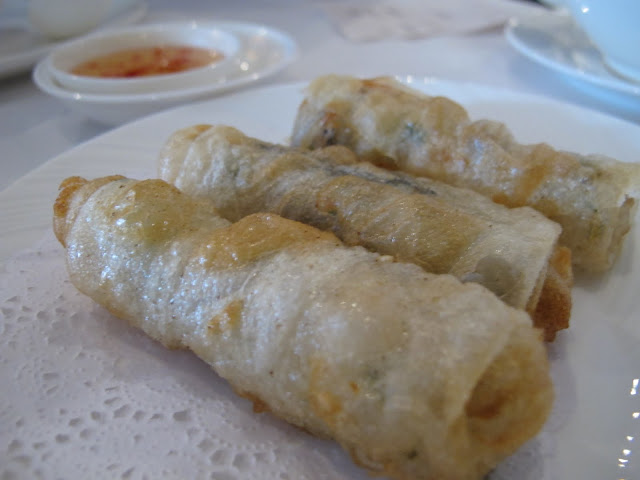 Spring rolls aren’t really my thing, but these were good – crispy shells were well-drained of excessive oil.
Spicy Chicken Feet 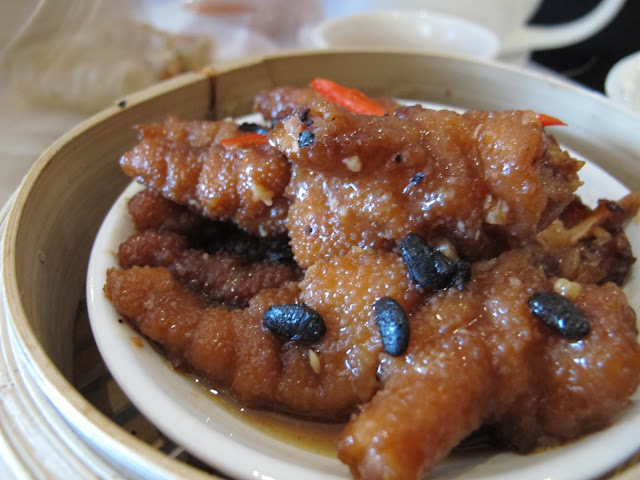 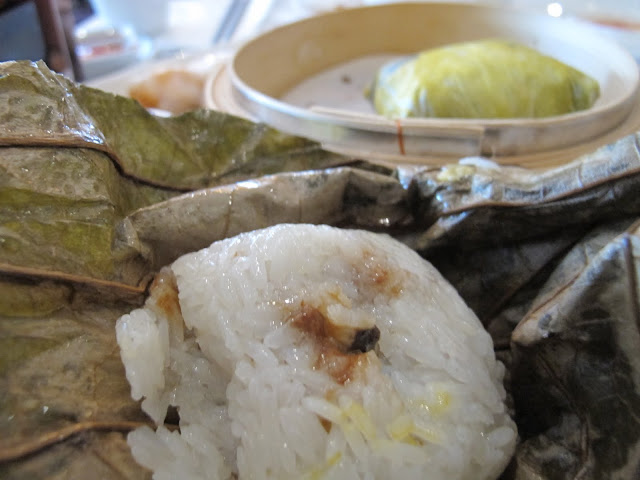 By UK standard, Royal China did a fair job with these. But being the picky old me, I thought the rice was undercooked and hence dry; the filling was skimpy and under-seasoned; the fragrance of lotus leaves lacking.
Baked Milk & Egg Tart 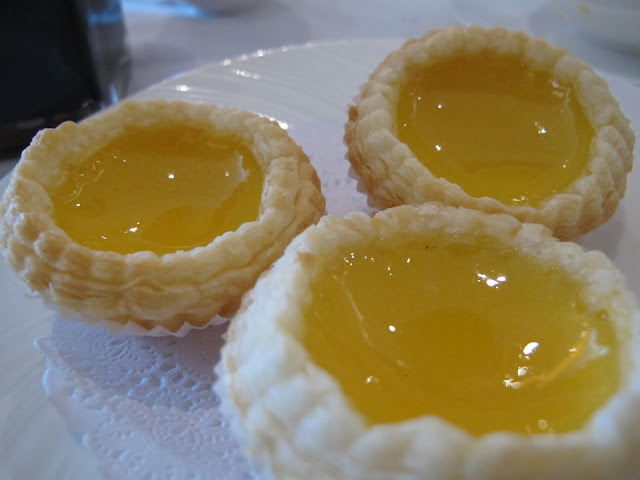 I have actually lost count of the number of times I wake up and pray for an egg tart. I have eaten the best egg tarts in Hong Kong, ones with 33 layers in the puff pastry and a wobbly silky centre. But here, I’d settle for anything. Having said that, these need another 5 mins in the oven.
Pomelo and Mango 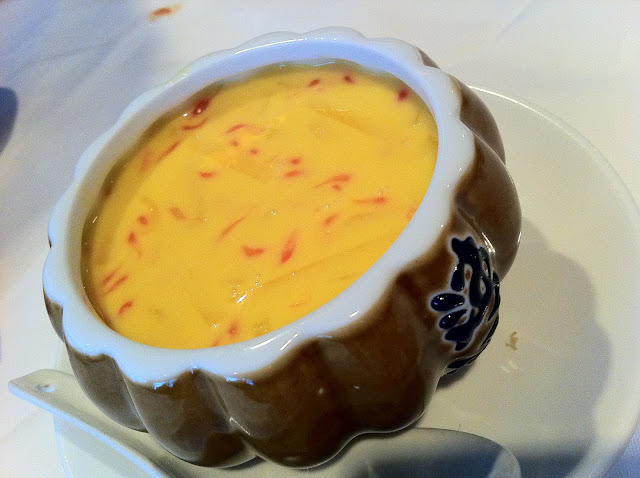 My brother loves this dessert, and it gradually grew on me. Perhaps this could do with more sago and more mango so it’d look more like a dessert than mango soup, but it ain’t a bad fix.
As per usual, great expectations are most likely to be met with huge disappointments. The trusted Royal China is no exception. Portions have most definitely shrunk and half of the dim sums could do with extra time in the steamer. On the plus side, there was no obvious mark-up in prices to offset the 25% discount. Given it is literally downstairs from my flat, I reckon I will still be a loyal patron, perhaps just not so regularly.
Royal China (Riverside)
30 Westferry Circus
London
E14 8RR
Tel: 0207 719 0888
You may also like: Shanghai Blues, Lotus, My Old Place