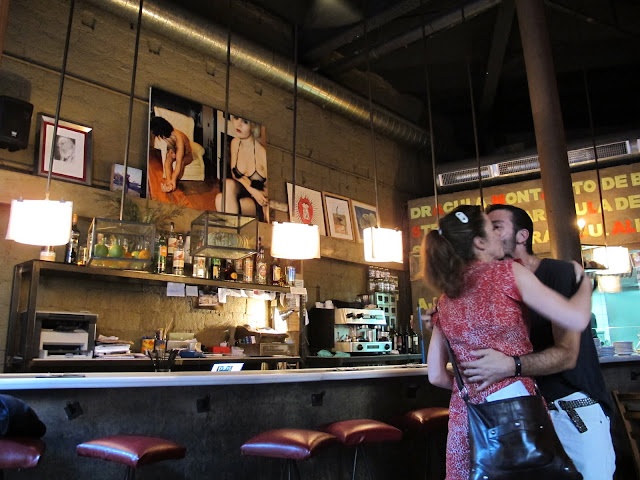 Rarely do I write standalone reviews for restaurants outside London, but I felt an urge for Santa Maria. Tapas never used to part of the Catalan eating habit, but as reputation for novelle cuisine flourished, demand grew in Barcelona. Modern tapas joints, such as Comerç 24 and Cal Pep, have popped up across the city to show off their new interpretation of the Spanish fare. Santa Maria is one of them.

It is located in the El Born area, which I took to be the equivalent of Shoreditch in London, about 10-min walk from Jaume Metro walking pass Picasso Museum. The restaurant is relatively small with c.12 small tables and a bar that sits 6. Spuntino-type of décor, effortlessly stylish with bronze and brass, pop art photograph hangings and light bulbs at odd angles. The kind of place you’d spot Helen Bonham Carter gazing into the air. There were two tasting menus, reasonably priced at €24 or €17 for vegetarian, and a la carte. We opted for both tasting menus to cover the entire a la carte with a bottle of Cava. 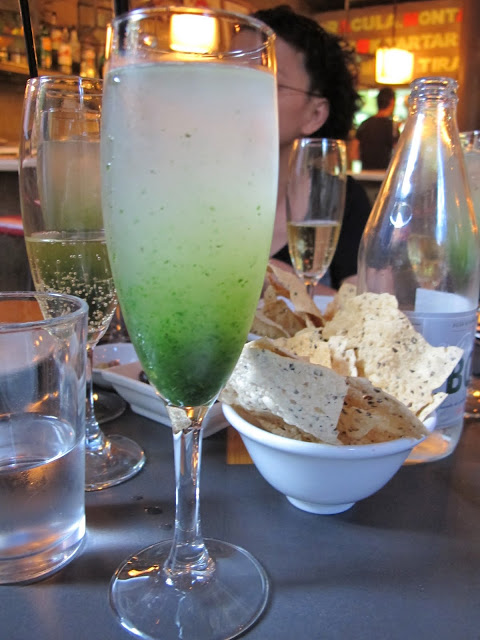 We watched the manager prepare this glowing green drink at the bar. The ice cold freshly squeezed melon juice was viscous and sugar sweet, lifted by finely chopped mint leaves. It was exactly what I needed after a day in the suffocating heat: a breath of cold air.  If this was what Clos Maggiore was attempting to imitate, it still has a long way to go. 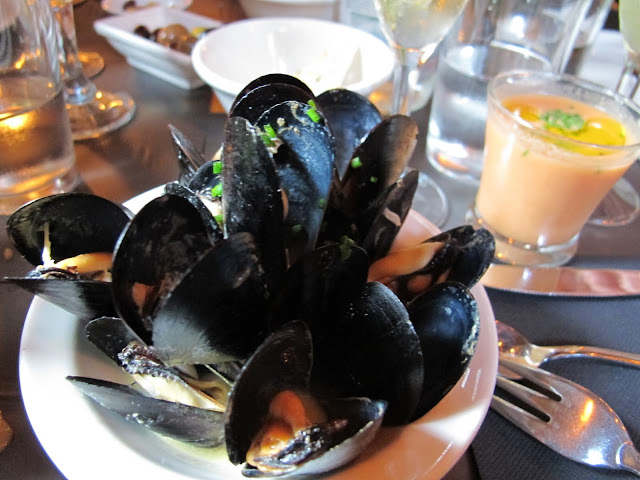 The passion fruit sauce infused into the podgy mussels, so I could taste the natural sweetness of the morsel itself and the fruitiness from the sauce. The combination was completely new to me, and it worked as if mussels were supposed to feed on passion fruit.

Except for the nibbles, this was the only overlapping item between the 2 menus. It’s a cold soup and there isn't much to add. However having tasted some of the most disgusting iced goo in a tourist trap at Madrid, I was pretty happy with this shot. 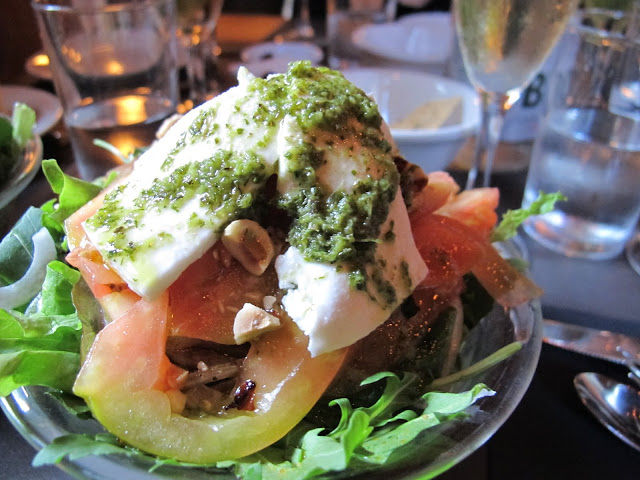 To my parents’ delight, salad portions were generous. It wasn’t a balsamic dressing but still very citrusy, and the cheese was for substance and chewy texture more than flavour. 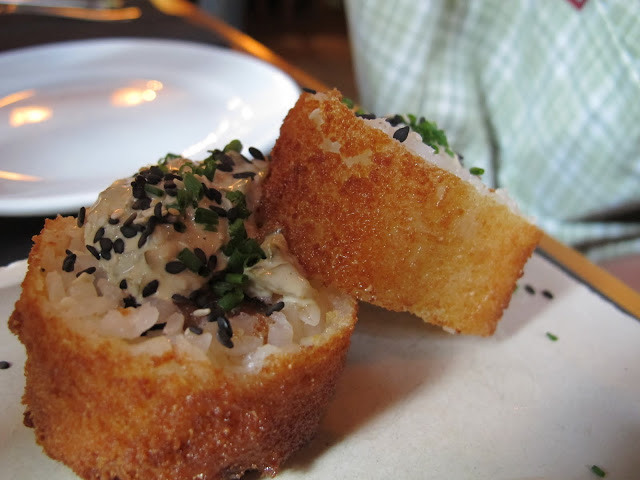 This was a good mutation; it replaced the sometimes limp, damp seaweed with a crunchy crust, but the downside was forgoing the clean taste of raw salmon. And salmon maki definitely goes better with wasabi and soy sauce than tartare. 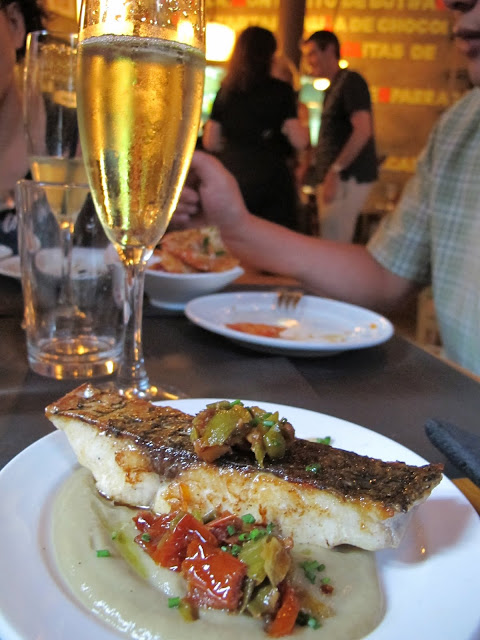 I thought Corvina was wine. This apparently common fish was a little too firm to my liking, so I stuck to the crispy, oily skin. The puree on the side was awesome; it added strong pungent aroma to the relatively tasteless fish. 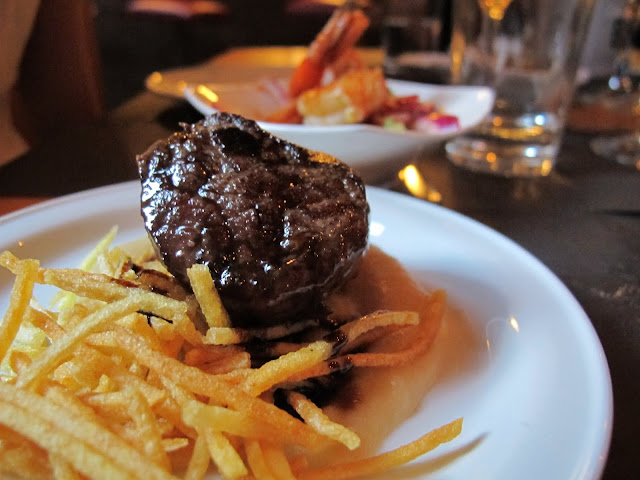 Veal was medium rare with a cold crimson centre. The lean meat was brawny and bursting with meaty flavours, thoughtfully toned down with smooth apple puree. It was slightly tougher than I had imagined; wasn’t un-chewable, just not the usual tenderness I am used to.
Toast of Camembert Cheese and blueberry marmalade 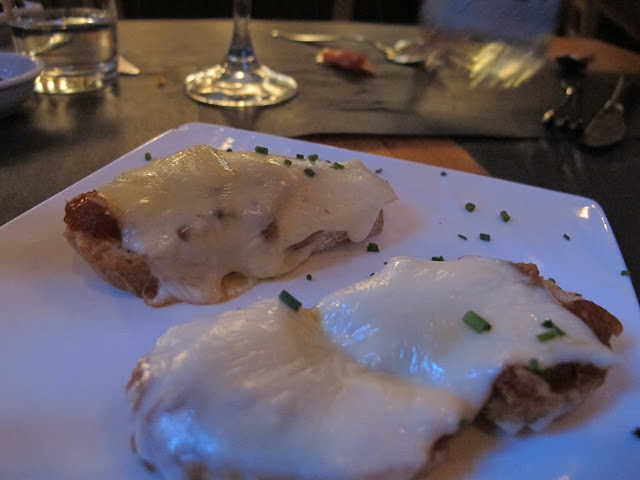 Just as I thought we were done with the savoury dishes… This was so (seemingly) simple but so bloody good. The pungent cheese, sweet jam, crispy toast… it served as a perfect synopsis; I geared up my second stomach for the sweets to follow. 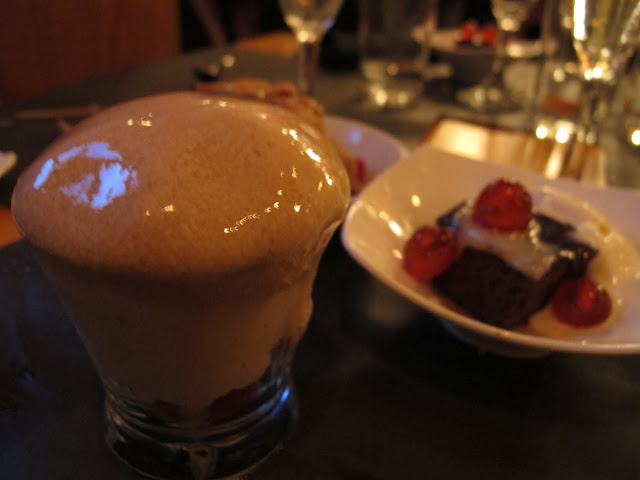 The coca cola foam looked deceivingly overflowing, but was held set afloat layers of chocolate sponge and mousse. As the mouthful compressed the tongue-tingling popping candies sparked a surprise finish.

Brownie with chocolate sauce and vanilla ice cream and pina colada mousse (back)
Truth be told, my memory for the second dessert is faint. I do, however, recall nothing was left on the plate. 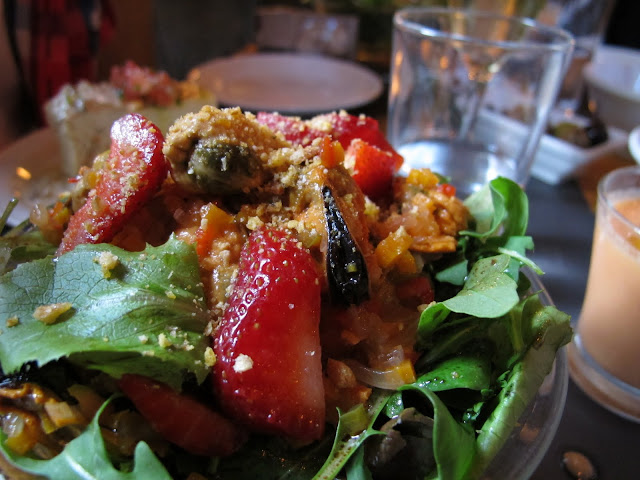 To quote my brother, he'd never thought strawberries and mussels could complement each other so well. And because this salad was so refreshing and complex with flavours, the soft cheese salad seemed relatively weak. 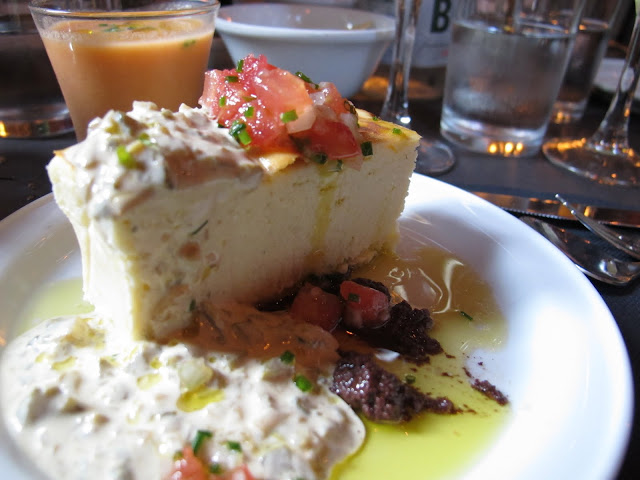 If I had to pick one favourite dish of the evening, this would be it. This was literally ‘fish cake’; its texture resembled a rich cheesecake, with masses of Hake blended into the mixture. The fishiness was carefully balanced with olive puree on the side. Genius. 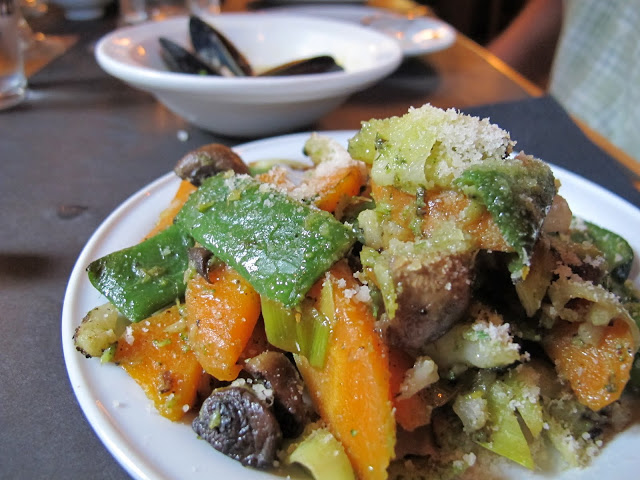 General verdict was all kinds of veg in Spain are sweeter, crunchier and tastier than the UK. 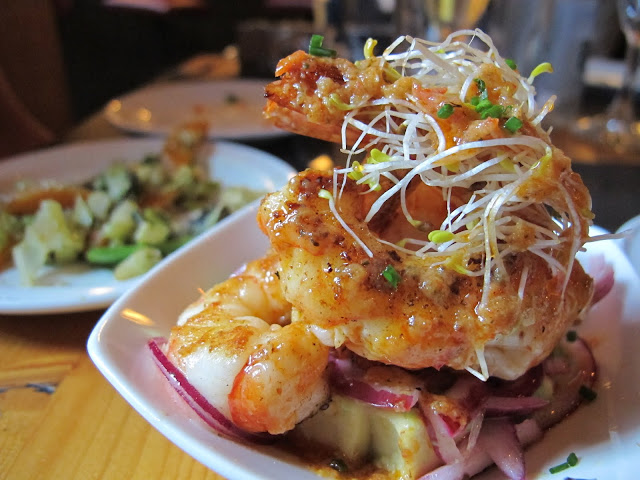 The familiar combination of crunchy gambas and zingy lime and coriander juice was brought a new dimension with ripen avocado. The fleshiness of the dish was satisfying and added much substance to a vegetarian menu.

Banana and nuts pudding with coffee cream (back) 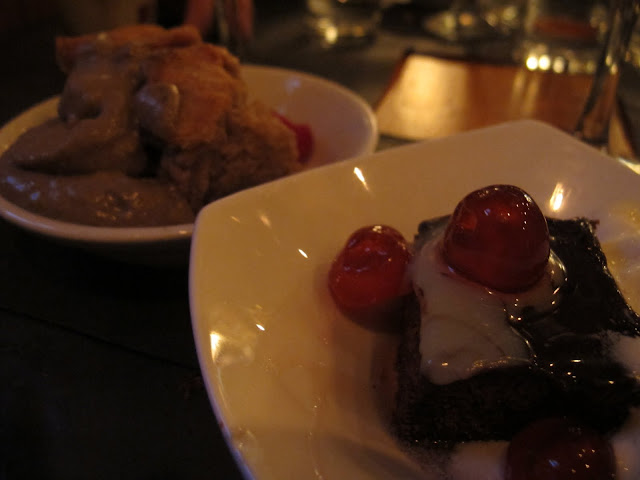 Didn’t like this one at all. Let's face it, it even looked like a pile of mushy shit. The pudding was damp and squishy, further smothered by feeble artificial coffee cream, left the most gooey texture in mouth. Unlike the other 2 desserts, this was left almost untouched.

I’m not sure if it’s accurate to call these modern tapas. The kitchen didn’t revamp traditional tapas recipes; instead these are brand new innovative creations in smaller portions. So this wouldn’t be the place to go if you’re looking for the Gambas al Aioli with a modern twist. For me, it was the best meal I had in Barcelona. I enjoyed the variety of flavours, bold combinations, simplification of some complex ingredients, but vice versa for others. With Cava flowing and dishes of delectable food filling up our table, my family enjoyed a great meal.

You may also like: Cambio de Tercio, Bocca di Lupo, Spuntino
at 16:49