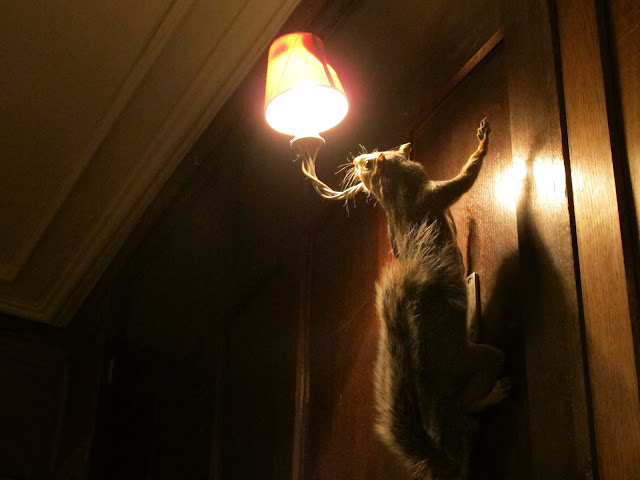 The overall consensus from the bloggersphere on Riding House Café has been ‘ingenious décor, marginally above average mains and miniscule small plates’. This doesn’t transpire huge enthusiasm and confidence. Nonetheless, since we booked a massage session in the neighbourhood, I guess I could do with some comfy sofas and funky lamps.


It’s not a hotel, it’s not a club, but it has a doorman/bouncer. Okay. The bloggers are right, the décor is splendid, and we got to admire it for a good 15mins when the receptionist admitted the restaurant had lost my reservation. I wasn’t too bothered, it was almost a full house, I’m sure they’d squeeze us in. We got the vibrant orange sofa section with the rat lamps. And I insist it’s a rat with a furry tail. 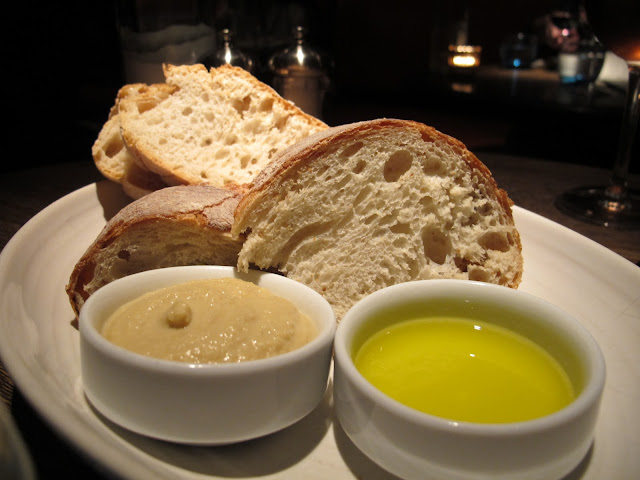 I was looking for the roast pork cubes on the menu, the one with its photo featured on the website. Not on the menu anymore?
Salt Cod Fritter, Red Pepper Aioli 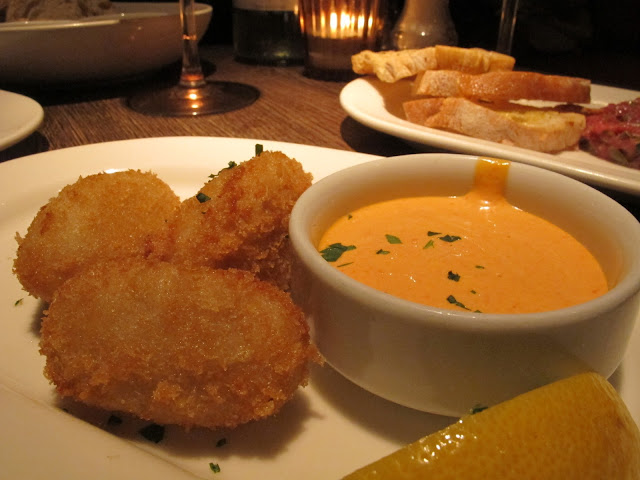 I have seen the small plates in £3-£4 range; they do look rather pathetic served in soy dishes. The £5 looks more the part, maybe. Three little croquettes jam packed with salt cod flakes were leaning on the dry side on their own, but got much better with a generous dollop of capsicum cream. While flavours were spot on, it was a rather dull small plate. Perhaps infuse the aioli into the fritter to put an unexpected spin to it, adds to the bursting effect? 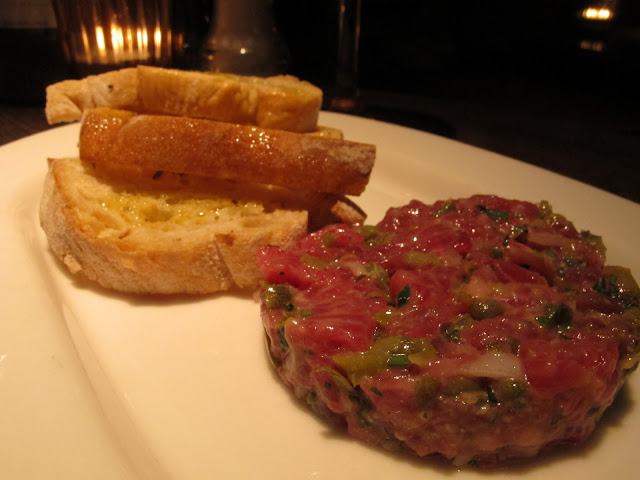 I am not a regular steak tartare fan; I honestly don’t know how a jaw-dropping tartare should taste. That said, this has made me want to become a regular rare beef tartare eater. The meat was roughly chopped and mixed with some crunchy shallots, fresh parsley and capers, seasoned perfectly with a just-adequate squeeze of lemon. Just slimy enough for that silken texture and just roughly enough for a bouncy but not tough mouthful. I loved it. 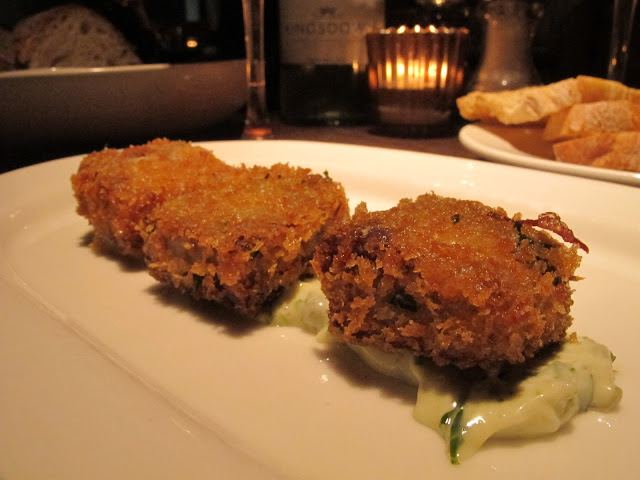 This was delicious; stingy, but delicious. The small tile of lamb was strong, almost gamey kind of strong, crispy coat with juicy meat that flaked away as I bit into it. The Gribiche tasted more like tartare sauce, I think it was missing the egg. But that’s missing the point, the meat was beautiful. 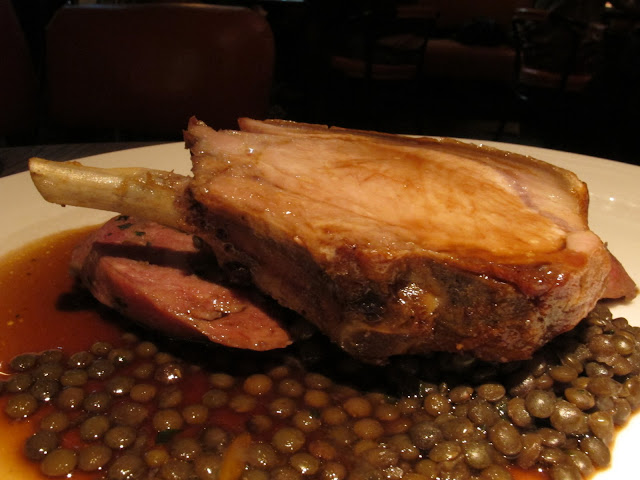 Now we’re talking - A good hunk of pig.  The pork, though succulent, was rather bland; flavours were lacking despite constant dunking into the gravy, which incidentally was quite watery and mild. It was probably too lean. I thought the smoked sausage was better, not too salty, packed with meatiness. Not a fan of lentils, but I have to say these weren’t half bad with the horseradish cream. 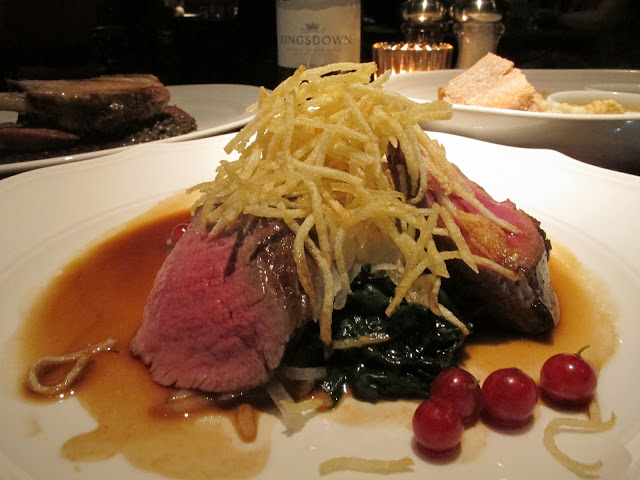 I’ve got into the bad habit of ordering venison whenever I see it on the menu; think the meat has a lot of character. Unlike the pork, these were well-seasoned and flavoursome. Probably just ever so slightly overcooked in the butt, but still tender. I don’t think the fried strings were turnip, but whatever they were, they gave a good kick to a dish. 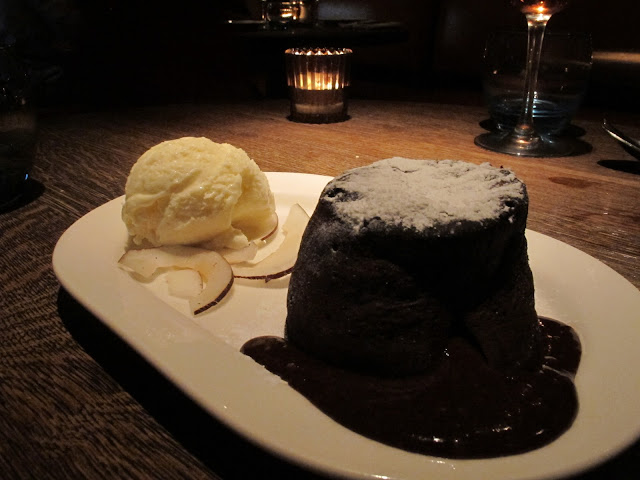 The fondant was leaking chocolate sauce before we cut into it, and while half of it was piping hot, there were bits were lukewarm… any ideas? Instead of a bouncy spongy chocolate case, it was dense, you know, the type you’d get when you put too much flour in your cake? Ice cream was alright, I wouldn’t expect it to be homemade though.


Bill came to just under £100 with an easy bottle of rose, nothing out of line. I tend to agree with the general opinion; décor is cool, small plates are miniature, maybe I’d say the food is more than marginally above par. Though not perfect, I felt much thought has gone into the food, perhaps not as much as the interior design, but it’s still commendable. With all the Christmas shopping to come, I’ll definitely check in for an afternoon snack.