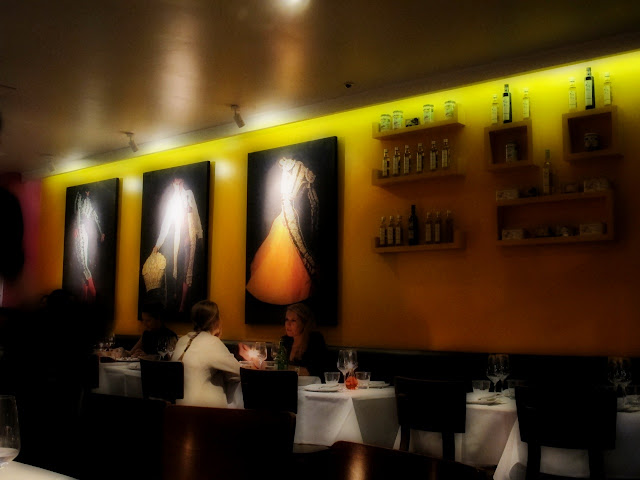 Half a year ago we went to Cambio de Tercio, we liked what the kitchen was capable of delivering but not necessarily that tasting menu. So 6 months later, after a hard day work (on a Saturday!), Mister treated me to some fine tapas at the sister restaurant to wind down.
Just across the road from CdT, Tendido Cero shares the same flamboyant buzz and vibrant décor with bright yellow walls and fine paintings that depict elegant moves of toreros. Menu is simply split between cold and hot tapas; it was a good mix of traditional items, like croquetas and tortilla, with innovative recipes, but the more elaborate options like deconstructed omelette and millefeuille of foie gras were strictly kept to the posher CdT restaurant.
Baby eels, cooked in olive oil, garlic and chilli 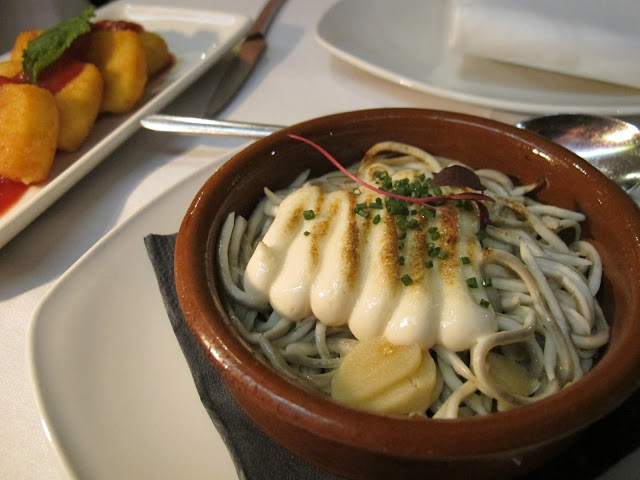 Just to clarify, the noodle-like things are indeed baby eels, and boy they are mind-blowingly delicious; quite possibly the best things I have ever eaten. The baby eels were beautifully flavoured with garlic and well-greased with olive oil, but what made me swoon was the unique texture of these babies; silky and slippery on the outside with a touch of bounce, yet mildly crunchy and ultra springy in mouth. All too perfect when lightly mingled with what tasted like toasted Béchamel sauce… Whoa! Epic dish.
Aubergine chips with homemade rosemary honey 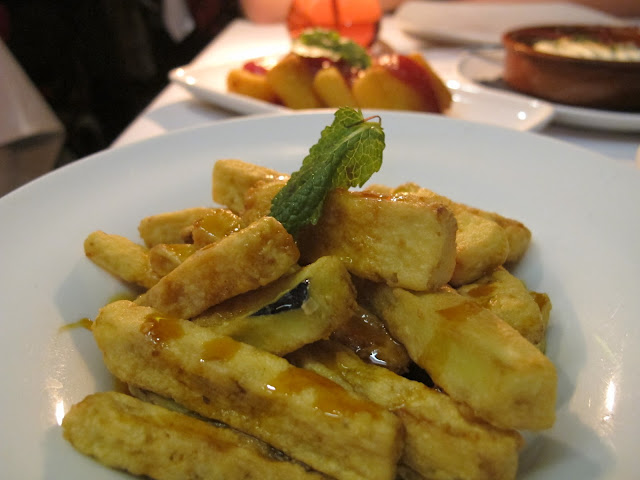 I think Pumpkin had an easy win over Aubergine. Zucca Fritti was too much stronger. I think aubergine was probably too mushy to make good chips; rosemary was too faint and got drowned by the honey, then it became a little too sweet and a little too soggy. It was a nice change though, just wouldn’t make it a frequent option.
Arzua cheese, sweet tomato marmalade 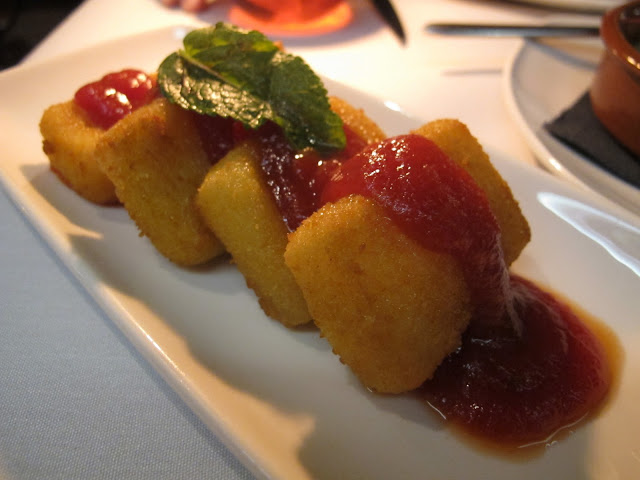 Mister misread the menu description as sweet potato marmalade, now that would have been interesting. This reminded me of Santa Maria back in Barcelona, but they used Camembert cheese over blueberry marmalade on toast, and it was a clean success. The was pretty ordinary by comparison; Arzua cheese is not particular stringy nor pungent, without such weight from the cheese, the tomato marmalade turned out too sweet and got a little sickening towards the second piece.
It was better used of a tomato than cooking it for 8 hours at CdT though.
Piquillo peppers stuffed with ox-tail 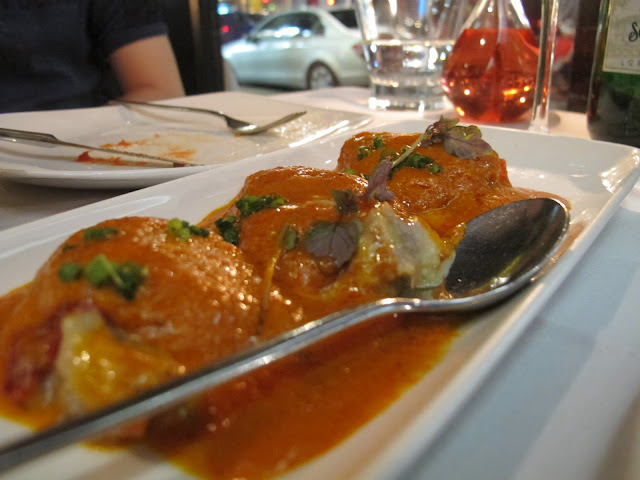 And here we hit another climax. It’s no regular braised oxtail; each morsel was attached with the translucent wobbly half-melted tendons that casually cling onto oxtail meats. The textures of the rich, chunky pepper sauce blended with the liquefying tendons as if they were meant for each other.
There is so much love in these parcels it’s unreal.
Galiccan octopus, potatoes, sweet paprika 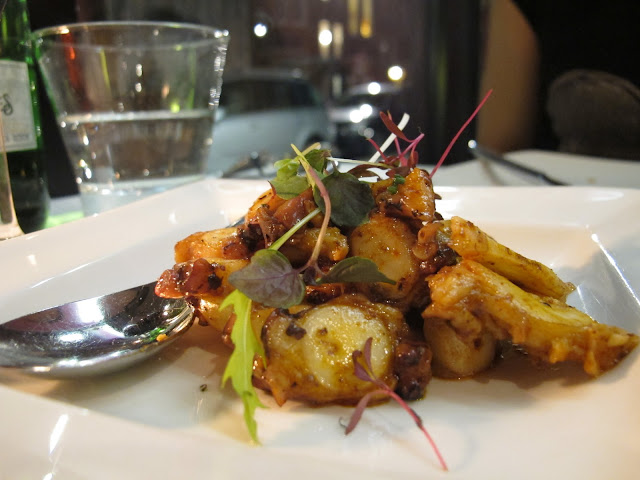 Must say I was half hoping for the same version at Cambio, and was inevitably slightly disappointed when I saw potato chunks instead of the veloute-like potato puree. Flavours were spot on nonetheless, with tender and succulent pieces of octopus, just not as much fireworks as the oxtail.
Lamb casserole, roasted almonds and white wine 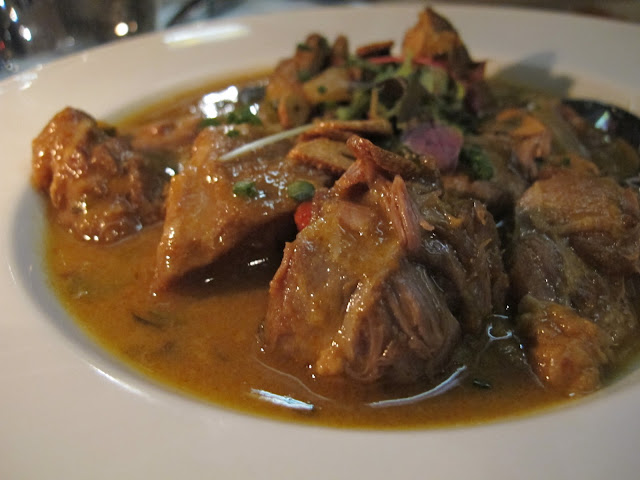 A very substantial dish and we were really very full already. Not overly complicated, just chunks of slow-cooked lamb braised to supreme tenderness; pieces with more fat were inevitably more dissolving but leaner lumps weren’t gristly either. White wine and almonds were more fruity than the usual stew, but the minor hitch is garlic, which were marginally burnt and gave off a faint hint of bitterness towards the end.
The Group is slowly taking up the entire Old Brompton Road, Capote Y Toros for ham and cheese, Cambio de Tercio for more complex courses, and Tendido Cero for a strictly tapas menu, hence the waiters’ constant dashing across the road to fetch wines and whatnots. I love the concept and the apparent specialism of each joint; standard of cooking is consistently high, a touch of modernisation to keep things interesting even for conventional recipes. Plus friendly staff, bubbly ambience, and a thick wine list, I can’t fault this place.
I think Tendido Cero has just topped my chart for favourite Tapas in London.
Tendido Cero
174 Old Brompton Road
London
SW5 0BA
Tel: 0207 373 2359