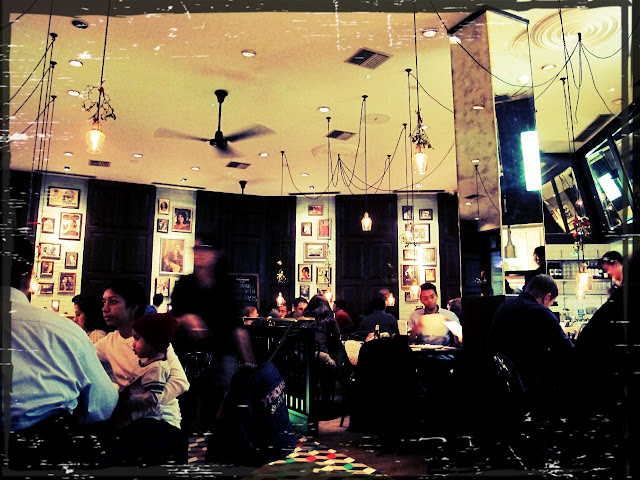 I’d never thought about having Indian food in Central; don’t the good ones always cluster, like Brick Lane or Bayswater? So I wasn’t too interested in Dishoom or its concept until I spotted my friend at work emailing her friends about it. She is Indian by origin, and if the natives like it, I shouldn’t miss it.


Since I read they have a no-booking system, I walked in nice and early at 7 on a Friday night. There was already a small crowd aggregated by the door, but I thought I was in luck as I eyeballed the few unoccupied small tables. We were checking out the cute little origami Santa hats subtly stuck on the nostalgic wall photographs when the guy said it was a 40-min wait. Huh? Whose invisible friends are those? We were invited to the bar downstairs, which was flooded by hungry diners. I smell business strategy.


Do they or do they not do bookings for less than 6 people?


It’s a silly system. The waitress end up battling through the horde at the bar, yelling out names of waiting diners and getting little responses. 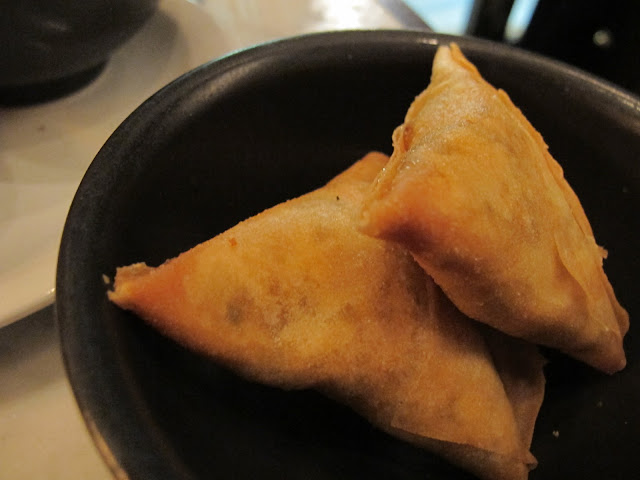 Six beautiful years with Mister and I didn’t know he liked samosas. I don’t usually order or even consider them an option. There is something in the garam masala I don’t like; it might be some derivation of nutmeg or cinnamon, given the range of spices in existence, I can only say it leaves a strong pungent aftertaste when I exhale. That aside, it was packed with potatoes and peas and f-loads of the spices I don’t like, wrapped in clean crispiness. 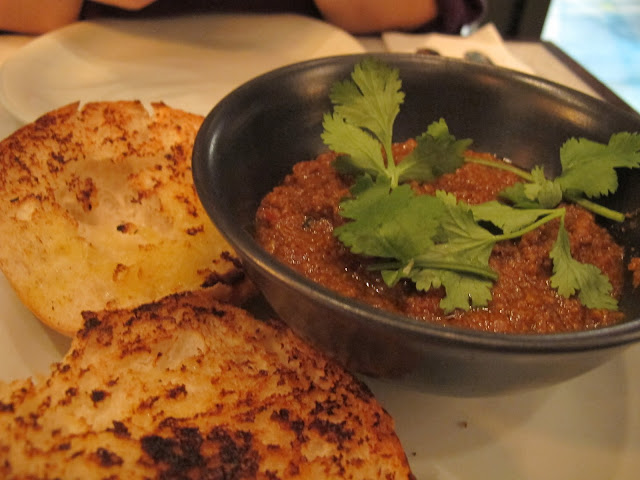 This wasn’t dissimilar to chilli con carne minus the beans, I think? Quite mild at first but then the heat gradually catches up, still pretty ordinary stuff though. The good bit was actually the soft toasted buttered bun… 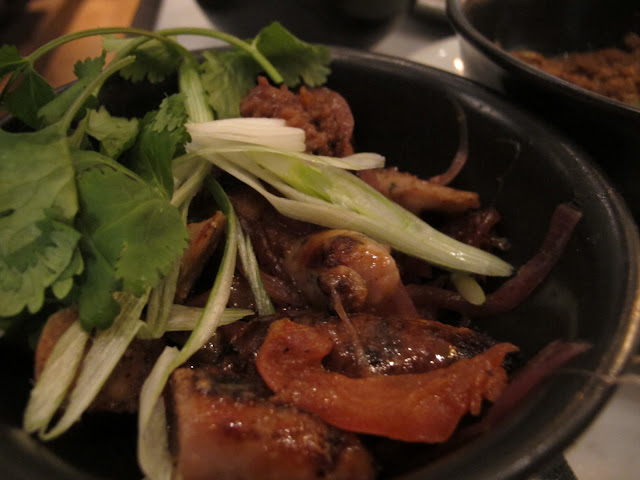 We don’t see much pork in usual Indian restaurants, so we thought we’d give the chipolatas a go here. Chopped sausages, lots of it, were tumbled in a Bombay masala sauce with onions. The sauce was meek and it’s sausages in a bit of sauce afterall, so it didn’t really win me over. 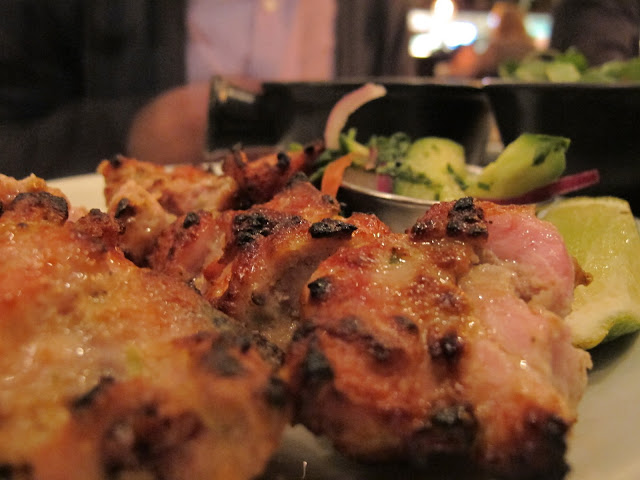 Yes! Chicken thigh is the correct part of the chicken to eat! I decided to ignore the pink bits on the chicken, and convinced myself it was the lights. I hope it was. Very tender and succulent pieces of chicken, but there wasn't much seasoning. It didn’t taste of anything, and Mister pretty much hit the nail on the head when he said it was like the grilled chicken thigh at a kebab shop without any flavours. 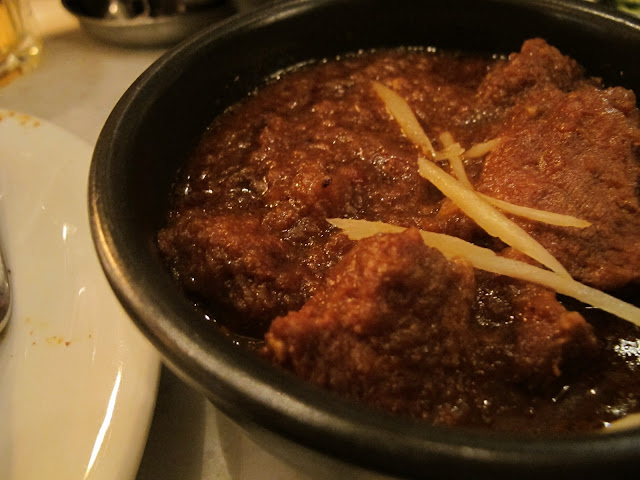 Our waiter described this dish in great detail, I just can’t remember. It was a flat tomato-based curry with large cubes of meat. The lamb was very lean and dense, but not inedibly leathery. Kinda boring stuff. 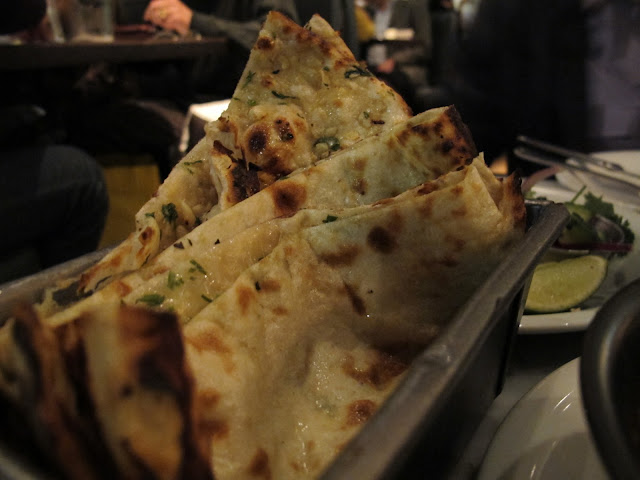 These were the highlights of the evening. The thin naan was stuffed with plenty of cheese (my half was, mister was less lucky) and rubbed with butter, grilled to wafer crispiness on the outside yet stretchy from the inside. They reminded me of pizzas.


Come to think of it, it’s rather tragic when naan becomes the pinnacle of a meal. Like going to a Chinese restaurant and the only thing one enjoyed was the rice.


On a separate note - didn’t like my Pino Grigio served in a mini water glass or a tall tumbler; somehow it’s okay to drink wine from tumblers in Polpo and Great Queen Street, but the yellowy liquid in this rather ugly looking container didn’t feel right.


Dishoom was alright, nothing was particularly bad yet the décor was far more exciting than the kitchen. The limited menu and drab flavours didn’t impress. I sorely missed the Lamb Passanda, Sag Paneer and whatever sweet coconut milk-based curry dishes I can’t spell. I must have gotten too used to the much Briton-ised Indian food... I was full, but not satisfied.

You may also like: Tayyabs, Lahore Kebab House, Koya
at 16:31