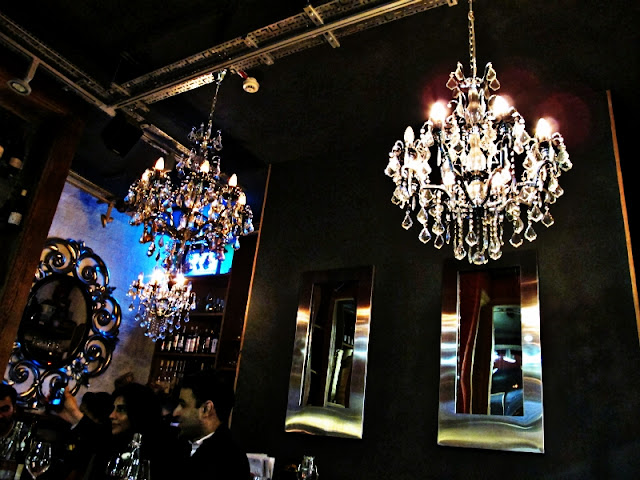 Androuët has found its way to London. The century-old heritage French cheese-maker opened its specialist cheese shop in the Old Spitalfields Market with an adjoining miniscule dining room. And it really is tiny with four tables; outdoor seating is simply unpopular at 4 degrees.


It was the eve of Christmas Eve with too many people out and about looking for food in the empty market. Good thing we booked, so we secured a little table at the corner of the restaurant, other insistent diners were led into the closed cheese shop next door with tables wedged between the cashiers and cheese cupboards. Actually I’m not sure if it can be classed as a restaurant when it’s pretty much the same size as an en-suite bedroom.
Since I genuinely don’t know enough about cheese, and I won’t pretend to, I can only keep things to the simplest. 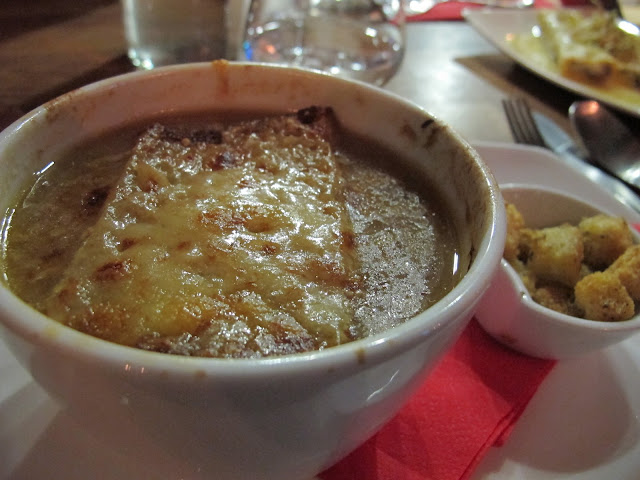 I was on a mission to find the most authentic French Onion soup a few months back, and what an epic fail that was. The trickiest bit is the definition of authenticity; it’s one of those dishes where flavours are totally personal.


This soup was good, especially on a chilly evening. Broth was packed with natural onion sweetness onions, which were cooked to their melting points so that they dissolved in mouth, topped with a chunk of cheesy toast. It was comforting. If anything I’d say I’m more accustomed to chunky soups and this was leaning on the watery side. 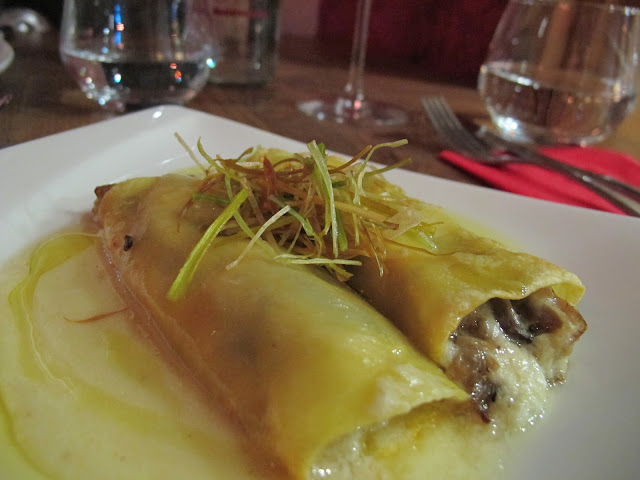 There were two types of cheeses: a softer, smoother one melted inside the cannelloni and a more grainy, heady type made into a thin bed of sauce. Both in moderation, so neither an overkill nor sparked much chemistry. The cannelloni itself, however, wasn’t quite up to scratch; it was definitely undercooked as opposed to al-dente, so were the shreds of leeks sprinkled on top of the pasta rolls and the mushroom fillings were thin. All in all, a bit drab.


The Androuet Fondue served with a selection of charcuterie, bread and crudités 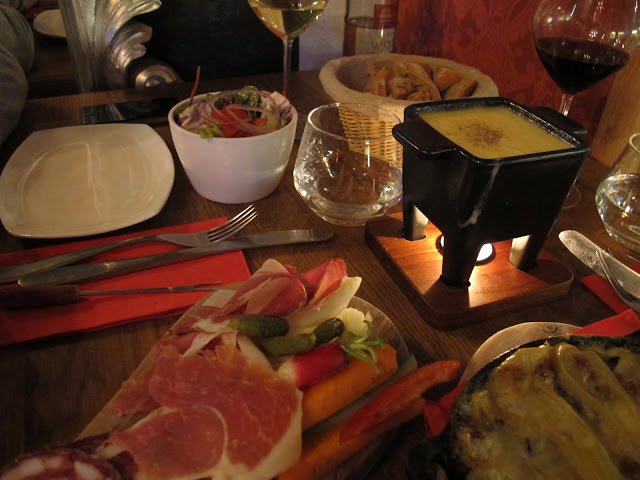 This fondue was absolutely divine; distinctively sweeter than usual with the 18months Comte & Emmental Grand Cru. Bayonne Ham from the charcuterie platter was delicate and the fragrance from the lard slowly diffused in gentle heat; saucisson slices didn’t quite go with the sweet cheese but overall a great fondue, all scooped up with a generous bread basket. 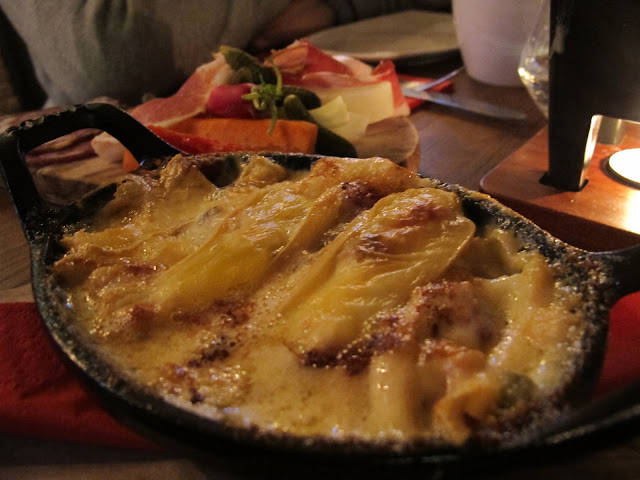 I originally wanted to get the Raclette, but was told this can only be eaten outside for safety reasons. Well I wasn’t going to brave the cold so settled for tartiflette instead. Layers of potatoes, bacon, onion, cream and topped with their own selected rich Reblochon cheese… sounds like potato daulphinoise with bacon to me…. so what if it is? Exactly what it says on then tin; nutty and soft Reblochon cheese with starchy potato slices and chunky meaty bacon cubes. While it wasn’t full of surprises, it was some great comforting winter grub. 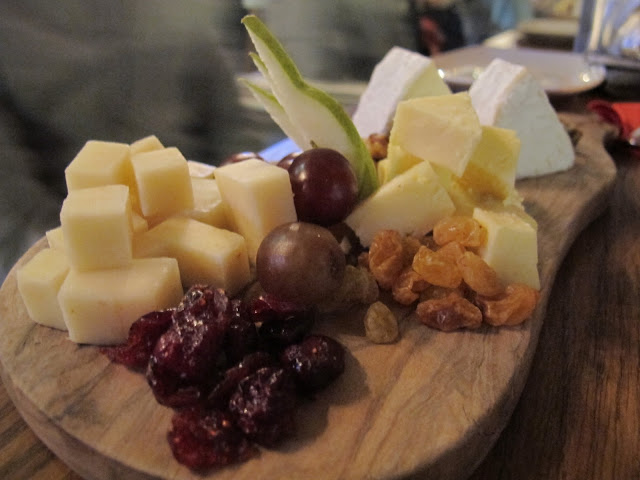 As if we hadn’t had enough cheese for the first two courses, Mister opted for the cheeseboard to finish off. We were given the full list of cheese printed on font size 4 to choose from. Candle light and small fonts aren’t the perfect match, so our waitress kindly offered to put together a selection for us.


And the board was massive with all the accompaniments: toasted walnuts, quince paste, pear slices, grapes, figs, sultanas, yet another basket of bread and 6 different types of crackers. We were given two French and one Cornwall, and all they tasted, er, like how we’d like our cheese to taste. Frankly I couldn’t fit much else in so I can only say I enjoyed them. The Brie was particularly interesting, mellow and sweet, almost fruity. 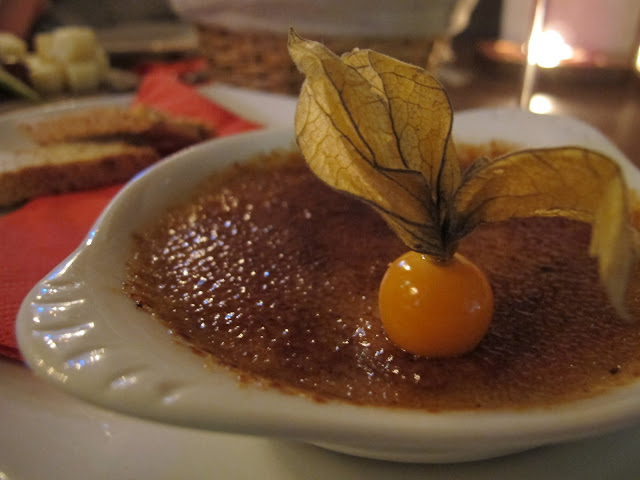 I preferred this sugary finish to my protein overload meal.


That was a lot of cheese to stomach in one evening, and that was probably only a fraction of what Androuet has to offer from its extensive list. To make the most of my visit, I should have made notes on the tasting notes and the origins of each sample, then I’d be able to articulate my preferences much better than just benchmarking ‘Roquefort’s too strong’. But after my second glass of wine, the heavily French-accented descriptions became too much of a blur and I was surely losing track of the varieties...  Androuet is brilliant; I’d probably return for an afternoon stopover and a cheese-fix snack/lunch. As for a fully cheese loaded 3-course dinner cramped in tiny room, once is enough.