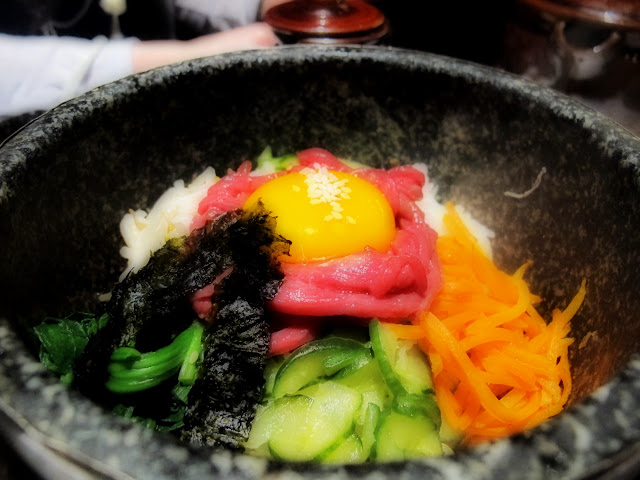 It just occurred to me this is my first post on Korean cuisine. We used to frequent Korean restaurants in our student days, Nara, Assa, Woo Jung, Arang, Dong San when it was still on Poland Street and even a random trip to New Malden; loved the huge variety of barbeque grill, hotpots, pancakes and bibimbap all for a price tag not too dear. I guess we grew out of sesame oil and decided Korean food is rarely truly bad but never excitingly exquisite. Then Kimchee on High Holborn got people talking; Korean friends approved its authenticity, foodies gave mixed reviews.


Kimchee reminded me of Sake No Hana, high ceilings with black lacquered walls, only this is much more crowded. With the 50% off food (until the end of January) and that crazy 90-min queue in the freezing cold, we went wild with the orders. I had an urge to hand the entire menu back to our waiter saying ‘one of each’, but Mister had better sense. Oddly enough our waiter launched to elaborate his opinion on North Korea’s political flaws…yawn. 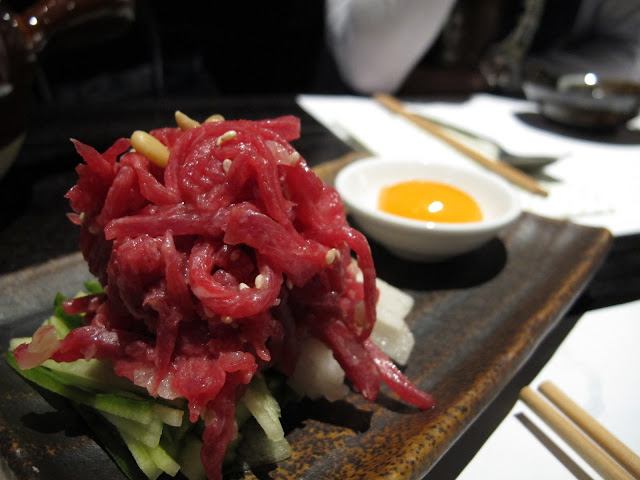 With my new found addiction to raw beef, this was irresistible - the crimson meat and glowing yolk looked stunning. The beef was so soft and smooth it dissolved on tongue, full marks for texture. Problem was it didn’t leave any trace of flavours except for the crisp sweetness from the pear. The yolk was almost unnecessary; the silky texture didn’t need exaggerating and it didn’t taste of anything… 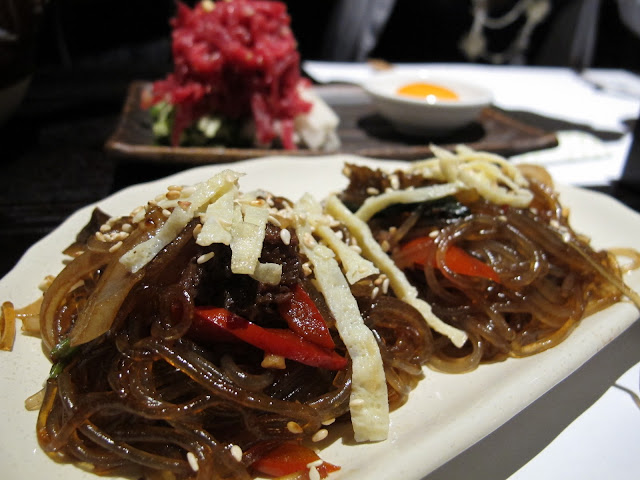 I can’t remember not ordering this in a Korean Restaurant. This thicker Korean vermicelli was full of bounce, just like how they should be. Jap Chee here is evidently less greasy than usual, the noodles clumped and clustered after a while. Again, flavours were mild and gentle on the sesame oil. 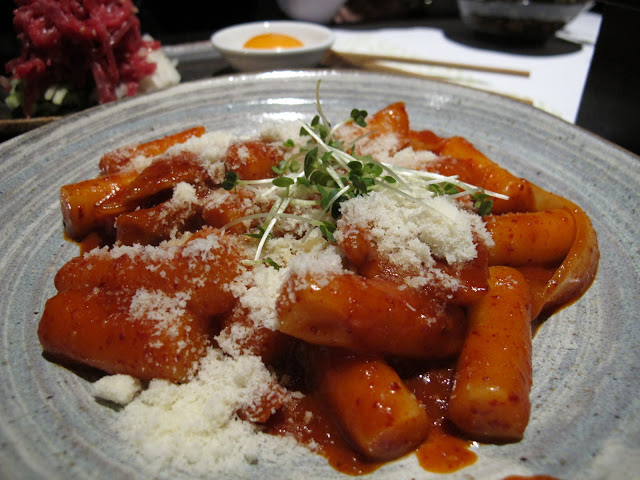 This was the best of the evening, and spiciest. I’m a fan of rice cakes; springy tubes in viscous Korean spicy sauce topped with generous shavings of parmesan. The heat gradually builds up and slowly releases to give a good kick to the dense rice cakes, while the cheese powder had a brilliant cooling effect. Prime example of successful fusion. 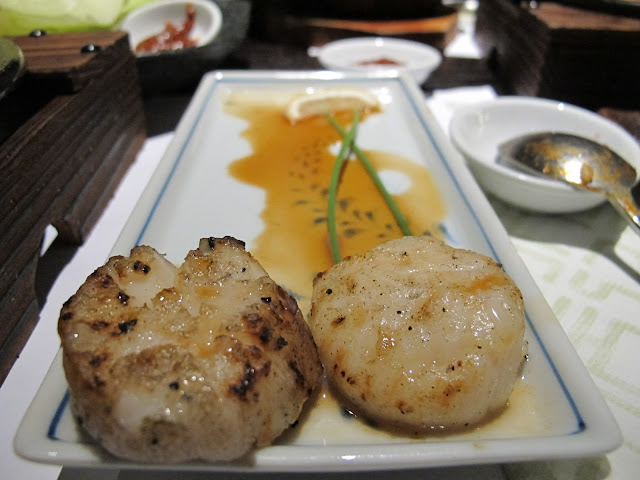 Denice, obviously blessed with the most artistry among us, suggested the scallops are arranged as blossomed flowers and the chives as stems; that doesn’t change the fact one of my flowers was burnt and ugly. Though plump and visually enticing – swimming in a watery sauce - the bouncy meaty scallops were bland and lacked the oceanic sweetness. Not nearly good enough.


We ordered three portions so I can confirm Chef wasn’t just picking on me. 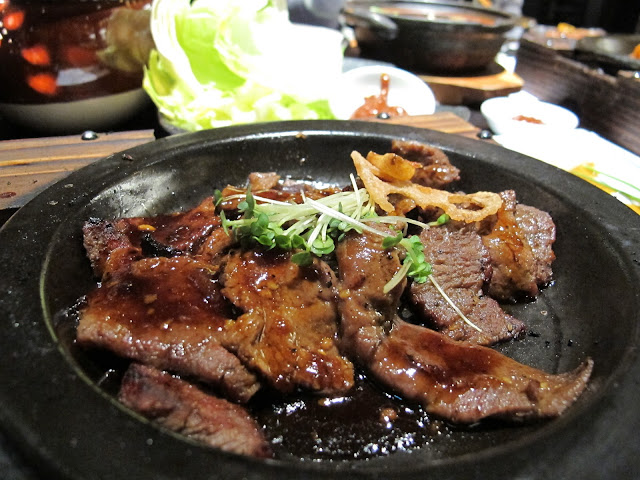 I don’t mind where the grilling takes place, kitchen or at the table; makes very little difference to me. Meat was scrumptious; soft and tender, great with the crunchy lettuce leaves. I thought the sauce resembled char-shui sauce; Mister disagreed. 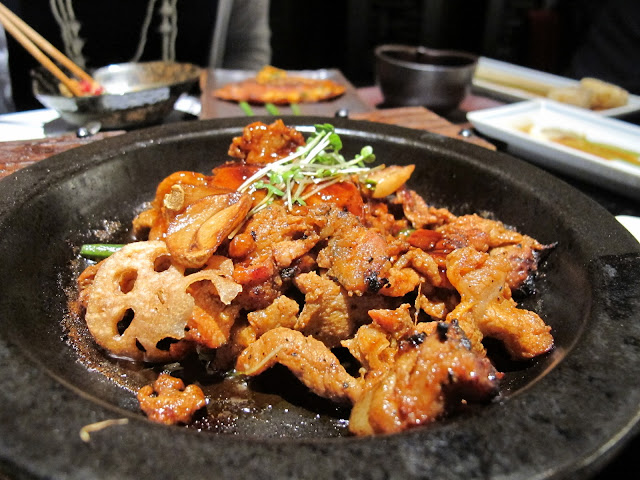 Beef was good, pork was even better. The best bits were the slices / bundles with a margin of lard that dissolved into gorgeous meat juices…


Kimchee Jeon
Pancake with kimchee and vegetables served with a soy and chive sauce
Not how I’d like my pancakes cooked. This was almost deep-fried to give its crusty shell, which would have been fine if paired with thick juicy filling. But this came with sparse filling, little seasoning and no hint of that distinctive spicy and zesty kimchee detected. 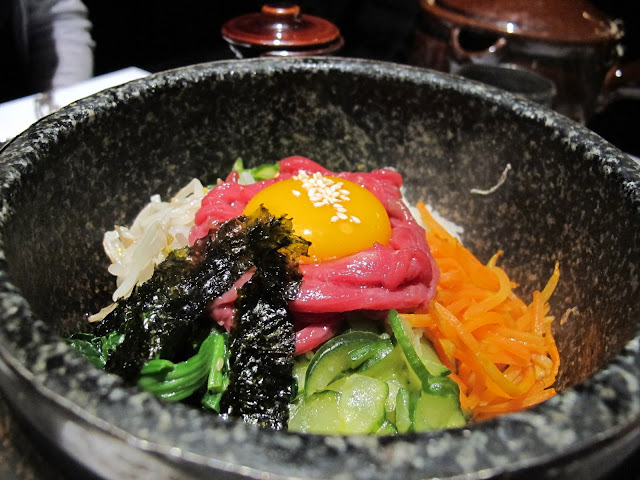 A good old pot of rice as the temperature dips - can’t complain. Bibimbaps don’t usually go wrong, that said soggy rice, flimsy sauce and stingy veg can ruin it. This one ticked all the boxes. Perhaps a tad too light on the sesame oil that greases the pot, it wasn’t sizzling away that unique aroma.
Hot Pot Bulgogi 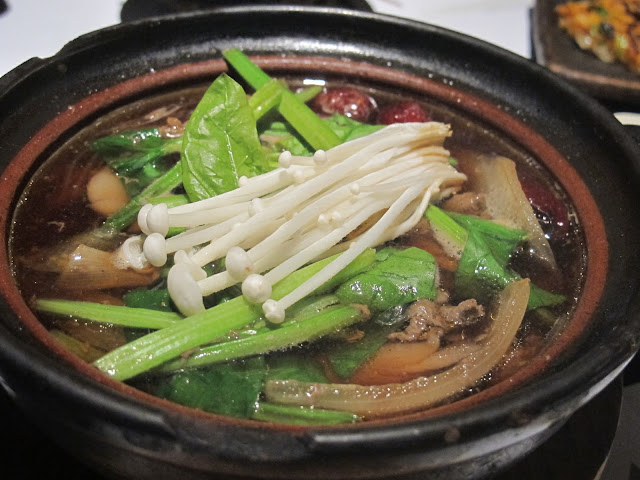 We didn’t actually order this, nor wanted this. We asked our waiter for his recommendation on the hot pot dishes. He then digressed to some random speech for 2 good minutes followed by a discussion on spiciness. With much effort on yanking the conversation back on track, we explained we wanted something super spicy and ended up with this – a sugary sweet broth with beef, rice cake and glass noodles.


So it’s no surprise that we didn’t enjoy the pot. The soup base was loaded with so much sugar my throat felt itchy with a couple of spoonfuls. The contents in the pot were repetitive considering what we have already ordered, more rice cake and more marinated beef… why we were recommended this I’d never understand.


Chocolate Mochi on the house 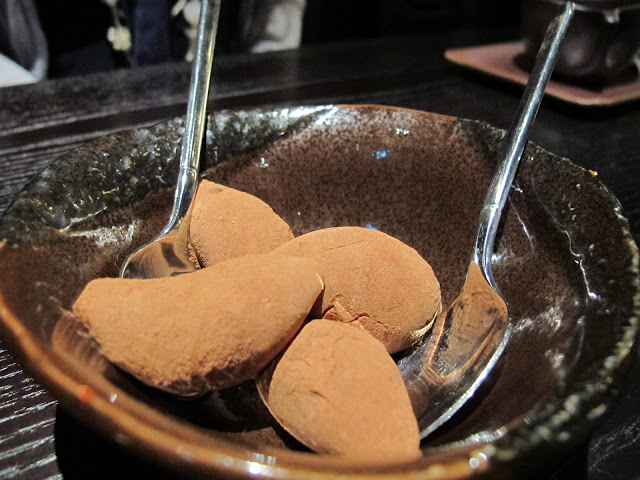 The massive pot for tea was hilarious, and of course impractical when we had two Winnie-the-Pooh honey pots sitting on our little table. My plum tea smelt of cough medicine but tasted deliciously fruity; Mister’s Korean rice tea was fragrant and beautifully roasted; Denice’s honey gingseng tea was miniscule.


The discount means we got away with all that grub for £46 for 3. Overall food was alright, some dishes were a little meek and cheap quality ingredient shows, but equally some items were pleasant surprises. The only pitfall really was our waiter; small talk is great, mindless babble is annoyance; being friendly is welcoming, drumming his fingers at our table in the middle of our meal and conversation is rude. Apart from him, it was quite a pleasant meal. While not everything on the table was spot on, I found dishes worth coming back for, provided the queue would die down after the discount period.