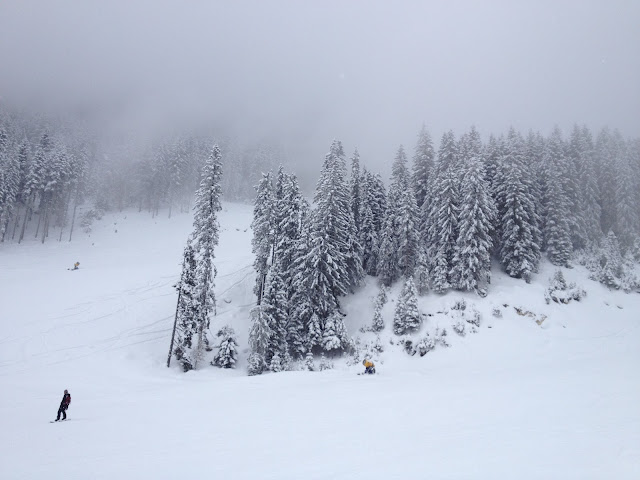 I decided to pick up skiing this winter, and brought my folks with me too. Bansko is a cute little ski resort at the foot of the Pirin Mountains,; the Balkans slopes have welcomed many uncertain beginners over the last few years. Partly because the pistes are generally more manageable, but mainly because the lessons, ski passes, boots hire and ski packs are much cheaper than the Alpine countries.
From Sofia Airport, we went to the taxi counter for a ride to the Central Bus Station, and the counter confirmed it should cost 10-12 leva. Once on the cab, the driver offered to take us to Bansko for 100 Euros. Knowing a bus ticket is approx 8 EUR each, I turned him down and put up with his yelping throughout the 15min ride. He charged me 25 leva. Grrr… 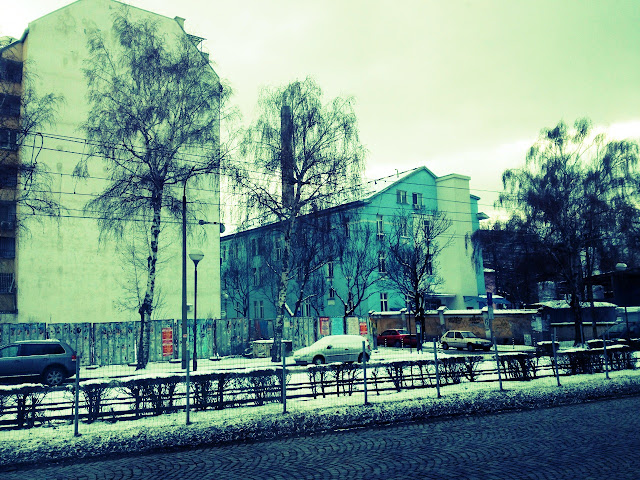 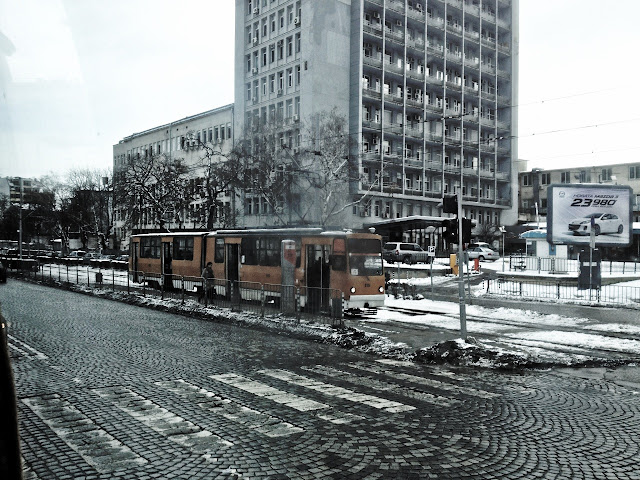 The bus ride was about 3.5 hours with very little to see en-route. As we drove away from the capital, the buildings looked either abandoned or half-built with graffiti-ed walls beside slurry snow piles.

The snow was much higher at Bansko, dragging our hand luggage along the ankle-deep snow wasn’t easy, but finding a taxi was even harder. It was a good 20min walk towards our apartment, near the Gondola lifts at the other end of town. Unlike the shabby dwellings in the city, the small town is lined with charming stone houses and cottages. It smelt gorgeous, too, of the distinctive aroma of burning wood. Interestingly -5˚C didn’t feel too chilly.

The streets are dominated by Bulgarian cuisines with a few Italian joints. We had our first dinner at Dedo Yonkata (no. 22 on the official Bansko map). Apart from the beautiful snow-drowned watermill in the courtyard and the real warming fireplace, it was the live football on offer that drew us in. 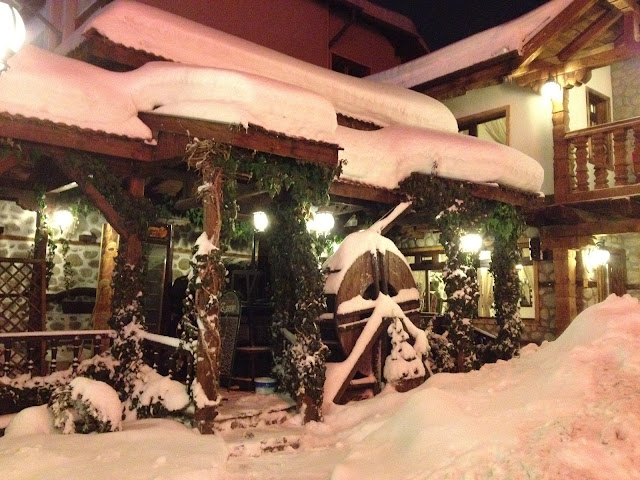 We had two traditional Bulgaria Sach, a sizzling metallic plate piled with vegetables and generous portions of roast pork, chicken, preserved sausage, ox tongue and pork neck. Except for the dried sausage, which tasted plastic, dry and salty, all the meat was beautifully cooked, succulent and tender. 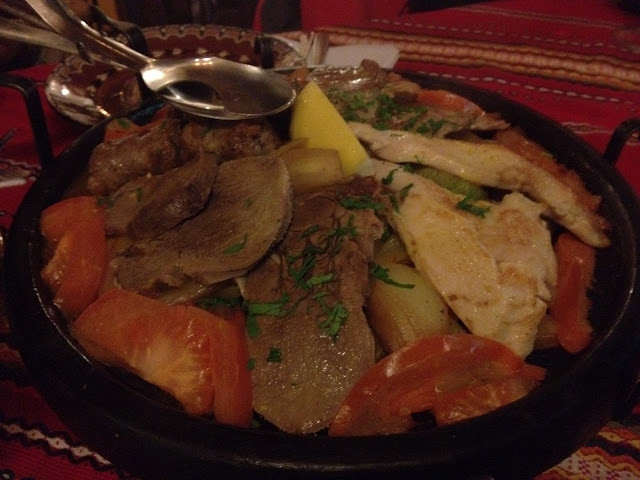 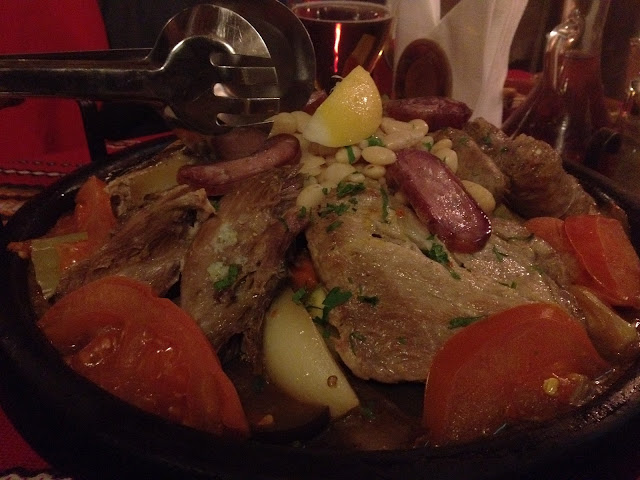 Another surprise find was Beef Tripe Soup. This soup resembled Laksa, packed with herbs and fragrance but minus the coconut cream. 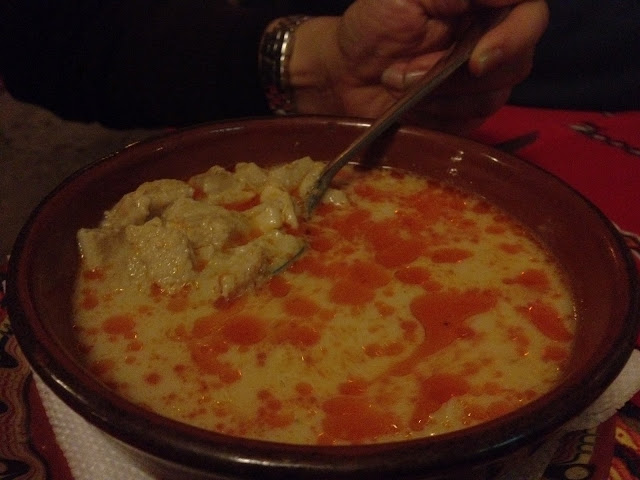 We tried another Bulgarian restaurant on the main street, but it wasn’t half as good. That said another dish called “Hotchpotch” was quite interesting; slow cooked meat, topped with processed cheese and served in a colourful earthenware pot. Stone Flower was another restaurant we tried with multi-national cuisines on offer. The deer sach was excellent with melt-in-mouth meat and viscous gravy, but it was the duck salad with parmesan that won us over. 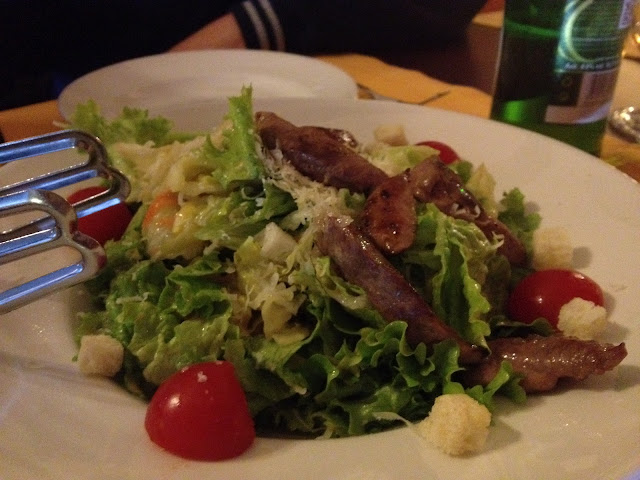 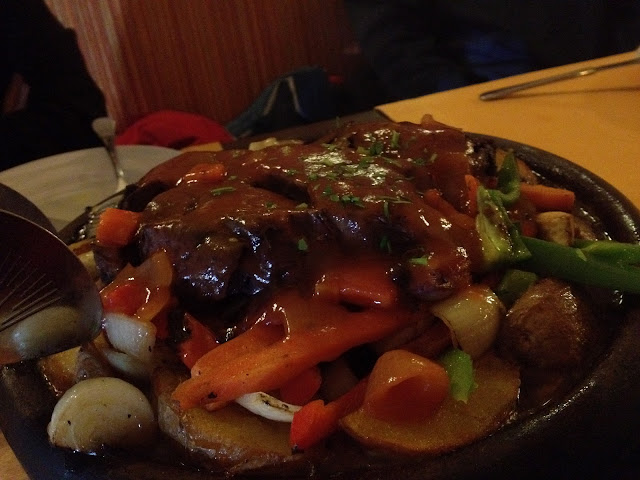 For the week we sampled bbq dishes, eggplant mash and various bit and pieces except for the roast stuffed whole rabbit. Since most dishes came with lots of roasted veg, we didn’t have much to complain. For the week we stayed, we revisited Dedo Yonkata again; a) food was better than others, and b) another football match.

Skiing turns out to easier to pick up than I imagined, though I think it takes more than 4 days to get me on the black runs. Bulgarians in Bansko generally speak good English, and the locals are unbelievably friendly. Not just the instructors, they are obviously brilliant and super tolerant, but just about everyone we met in town were all smiles and helpful when we looked lost. 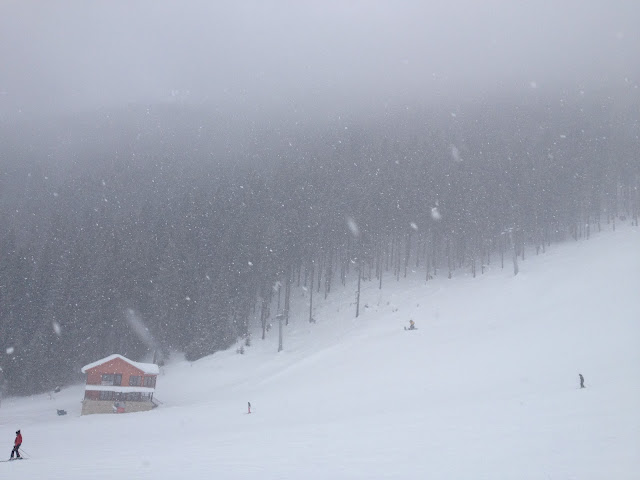 When we got back to Sofia, it was a different city. The snow storm had left the capital snow-blanketed, and absolutely below freezing. The first 5mins on the street left our faces numb, then decidedly painful as the wind pierced and slashed on...
at 04:56