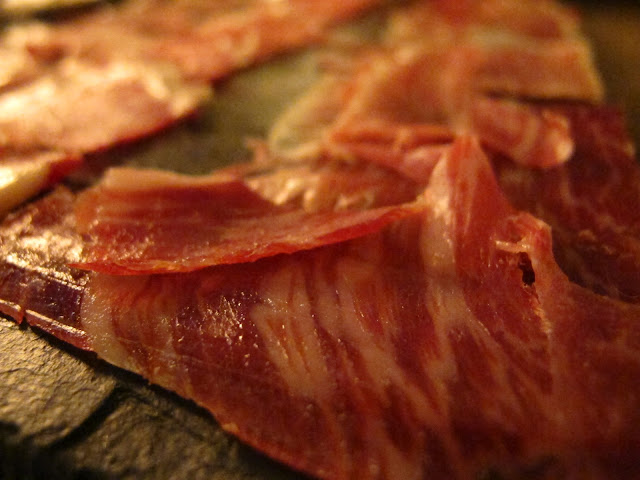 I walk past Iberica everyday on my way to work, yet it never appealed to me until LucyL sang praises about the food, listing dishes I must try. Well I have no excuse to dodge really; Mister decided it was the perfect place to mark our 7th V-day.


The restaurant is surprisingly spacious, but also quite cosy as it's split into different sections; red velvet sofa booths in the middle, marble bar on the side, and smaller tables in the upper level areas. We were greeted at the jamon station, sniffing away the meaty fragrance from the sexy legs of Iberica pigs on display. From upstairs, we had a clear view of the open kitchen where Chef was gushing out orders in Spanish while the busy team was bustling about. 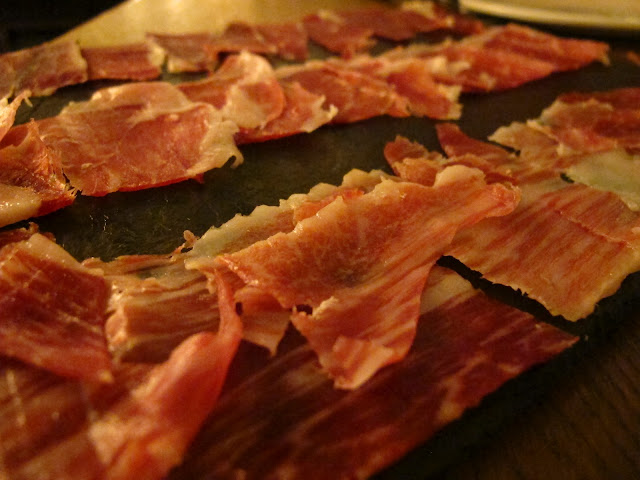 The three hams were top quality stuff, no doubt. All distinctively different in their characters, but all equally exquisite in flavours. I started with the Salamanca, one that was described as the sweetest of the trio. The beautiful marbling lard melted on tongue to unveil the sweet essence in the oil; the mellow flavours of meat were slowly released and left a trail of aromatic nuttiness. 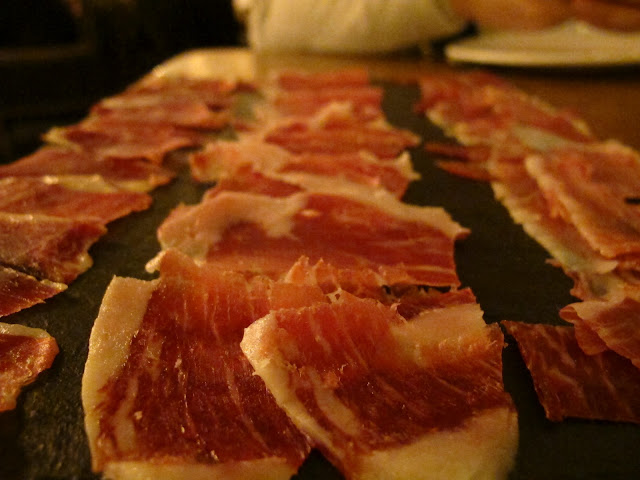 Next I went for the deeper scarlet coloured Huelva; the sweetness was more subdued, almost as an undertone to the structured piggy flavours that unfolded layer by layer. Cordoba was a starker contrast to the other two, thicker in cut, drier in grease and smokier with a denser punch of meatiness; finished with a faintly sweet aftertaste. Quite simply the best Jamon Iberico we have ever had.


Mister has developed an addiction to this platter; he began planning his next visit as soon as he put the final piece of ham in his mouth... 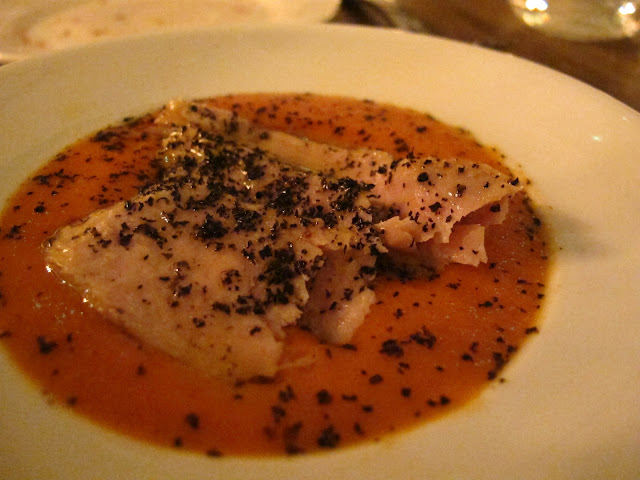 Right, let's get the low-light out of the way first. This was truly bad because I was expecting the tuna to be lightly seared on the outside to preserve the wobbling fat of the belly, and that it would dissolve in mouth. Silly me. Instead this was cooked to tinned tuna hopelessness, stiff and bland and a waste of a good piece of fish. Tuna belly or not, i think it's a crime to cook any fish this far into death.


Things then got better from here... 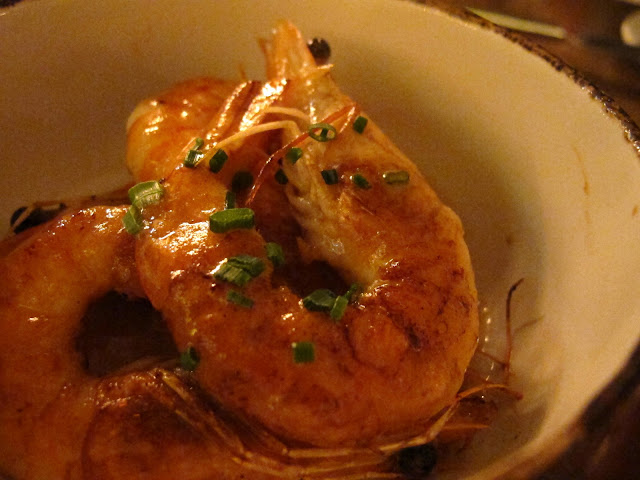 The prawns soaked up the garlic oil and were perfectly seasoned. It's a typical tapas dish well done, prawns in shell drizzled in sherry vinegar is always better than de-shelled frozen prawns swimming in garlicky oil. These could be bouncier and fresher though, thought they were slightly mushy... 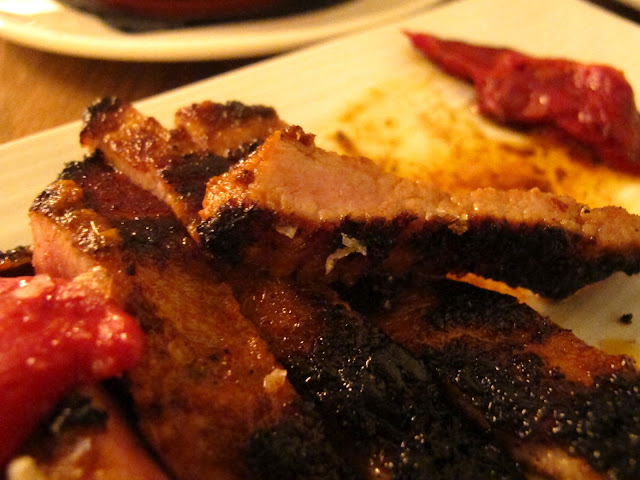 Ultra soft pork grilled to a crispy shell; the Iberico pork must have been speckled with fat before it was cooked to leave pork juices trickling. The tenderness resembled a more refined half-fat char-siu (roast pork), without an overpowering honey glaze to boast the natural flavours in the meat.


It does look too heavily charred on the edge. I have a feeling we took too long over our jamon the kitchen had to re-fire. Anyhow it was still a freaking juicy piece of pork. 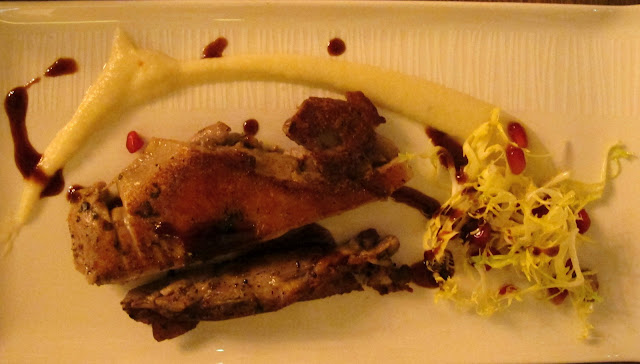 Our third plate of pig in one meal; we just couldn't get enough of it. Unlike the intense cured ham or masculine fillet in the previous courses, this was more graceful and delicate. The skin was paper-thin with an equally thin layer of jelly-like oil to magnify the silky soft texture; it almost liquefied in mouth. All well balanced by the mildly sweet apple puree that alleviated the grease. Beautiful dish.


Just as I thought Tendido Cero was in a league of its own, Iberica came along. It was brilliant; the quality of ingredients truly shined through, especially the Iberico pork dishes. Like the Cambio de Tercio group, the menu includes some innovative and sophisticated recipes as well as traditional raciones. I was gutted they ran out of the Fried artichokes & white asparagus with sea-urchin alioli, one of the recommendations from LucyL. Sea-urchin alioli sounded so good… but I’m not too bothered, we will definitely be back.

You may also like: Tendido Cero, Cambio de Tercio, Santa Maria
at 00:31