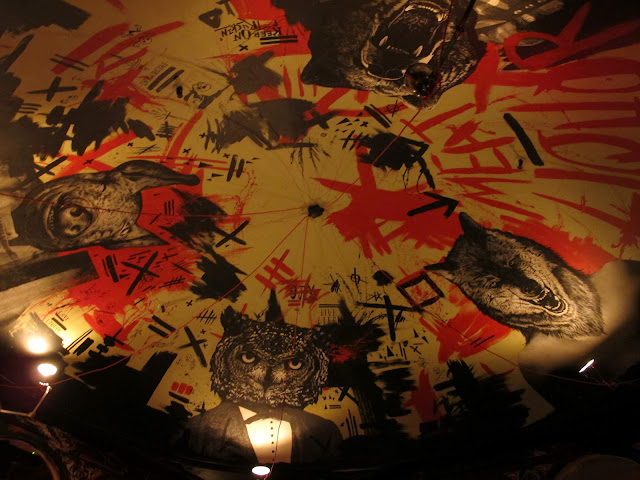 I missed the Meatwagon and never found the way to Meateasy. So when MeatLiquor got the London crowd queuing at all dining hours, I had crazily high hopes for it. After a frantic schedule over Xmas and CNY, I dragged Bro with us for more objective opinion.
The room reached saturation point at 4pm on this particular Friday afternoon, and the queue began around 5. From half 5, we waited for a brief 25min in the cold before we got the little table by the long cage of kitchen roll. My cider was disgusting, I hated the fermenting yeast aftertaste. 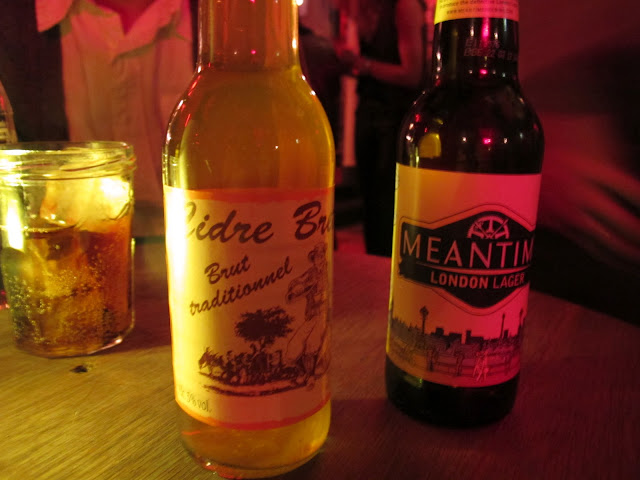 When the food arrived after an hour we gave the oil-drenched metallic tray a good shower of flashes. The lights were dimmer than my bedside lamp, so excuse the photos.
Onion Rings 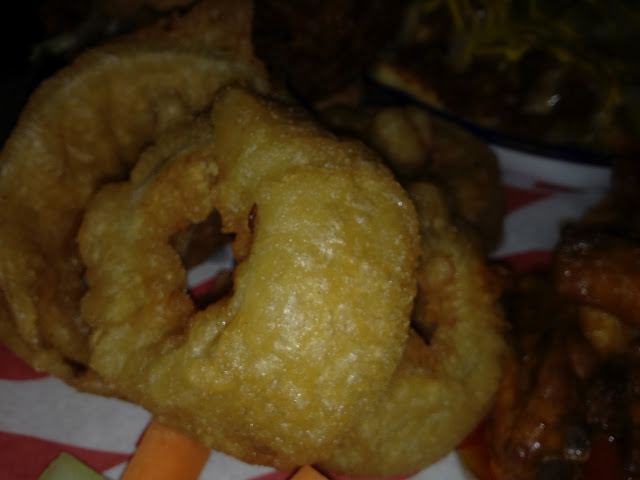 Massive onions were enveloped by even bigger batter, which was just thick enough to give substance but not drowned the sweet crunchy onions. Good stuff.
Buffalo wings with Blue Cheese Dip 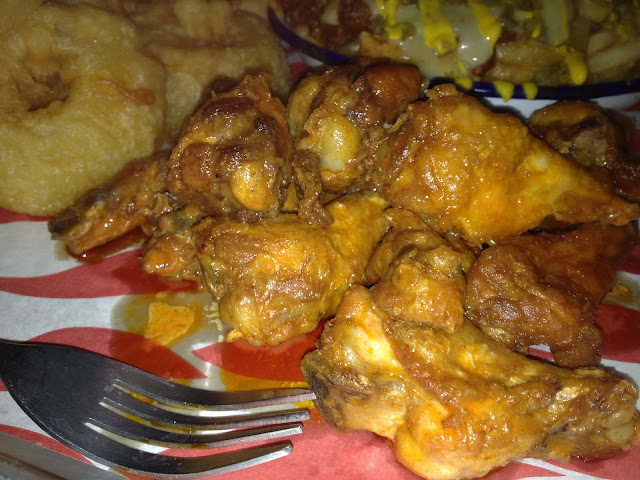 Immediately we could smell the nose-prickling vinegar. The unexpected citrusy kick was a good preamble to the mildly spicy mini wings. I didn't get the wings frenzy that was commonly spread among the other MeatLiquor followers. What have I missed? The blue cheese in the dip was subtle, we all thought it was more sour cream than cheese, but went alright with the wings.
Chilli Cheese Fries 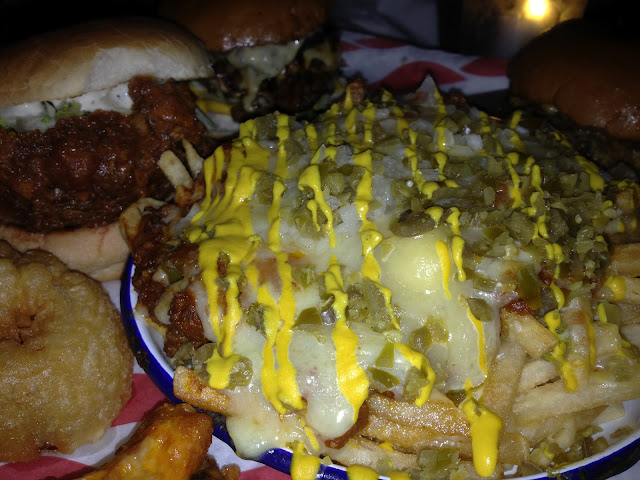 In short this was chilli con carne with fries. Fries were flimsy, limp and glimmering under flash, blanketed with chilli sauce and finally topped with lumps of dried minced meat, chopped pickles, plastic cheese. I'm not sure why some bloggers were groaning and moaning in pleasure... Truthfully it was quite disgusting. We didn't even get through half of it, simply because we didn't want to.
Buffalo Chicken Burger 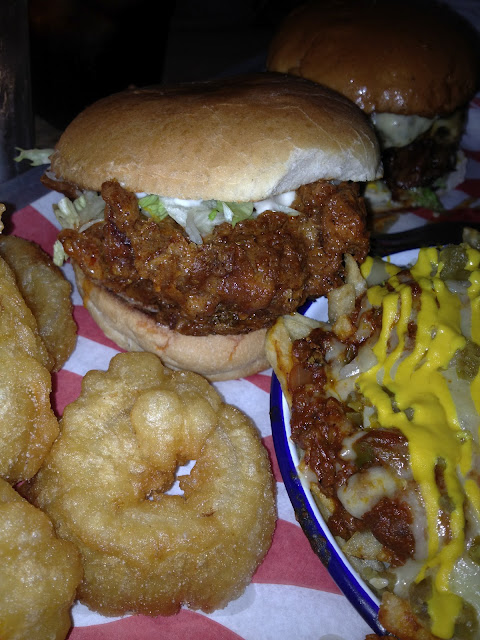 This would have been an epic burger; one well-greased burger with a juicy hunk of soft chicken breast smothered in thick sauce... had the chicken not been coated with a stomach-upturning, eye-popping, head-pounding (I can go on forever) acidity. The poor chicken must have been bombarded to death by lemons and limes, then kept in the vinegar pot to keep it dead till I ordered it. Those born in the 80's would know this candy called Super Lemon, the chicken coating was exactly like that, but without the eventual sweetness.
Look if the HOT pepper sauce is actually dominantly sour, maybe they should call it zesty & hot pepper sauce? Or just outright fucking sour sauce.
Dead Hippie (bottom right) 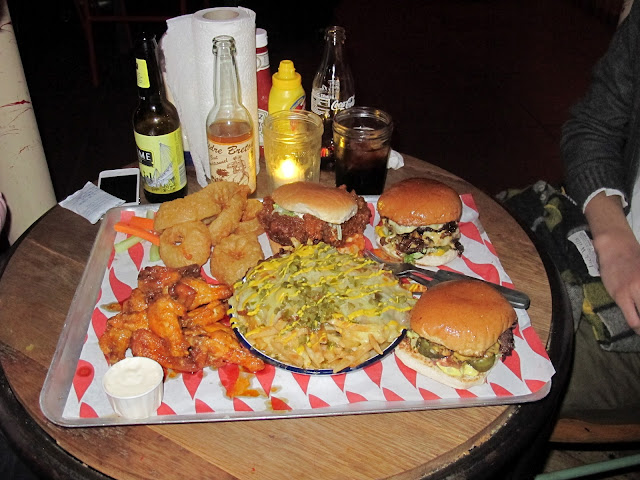 This definitely rescued some grace for the much celebrated Yianni. The double patties were dripping with beef juices, oozing with beefy flavours and soft in texture with a touch of grainy chew; there was so much life in the patties! All stacked up with a good splurge of sauce and packed between supple buns. One good burger.
Mushroom Swiss 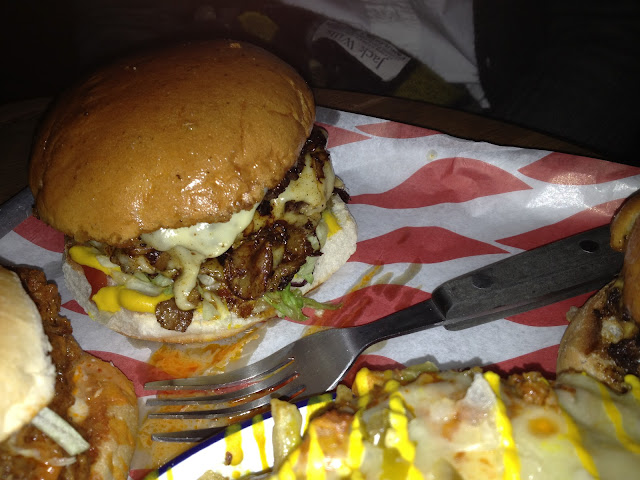 This wasn't quite as good as the DH above, though the patties were equally well made. While the mushrooms brought more bounce and springy textures, they also watered down the flavours. More to the point, swiss cheese is never going to beat American cheese in a burger.
The glaring music, current gothic decor and comical caricature was great for a one-timer; for me, not the most comfortable dining experience. But I'm sure it's a winner, judging from the snaking queue when we left at 8. As for the grub, I reckon it's sorely overrated. Of the three burgers we ordered, I thought only one ticked all the boxes, and even so, it didn't quite take me to burger heaven. The rest of the food is just typical American diner kinda grub. I'll do it again, but only on a no-queue day for a takeaway of the Dead Hippie, thanks.
MEATLiquor
74 Welbeck Street
London
W1G 0BA
Tel: 0207 224 4239