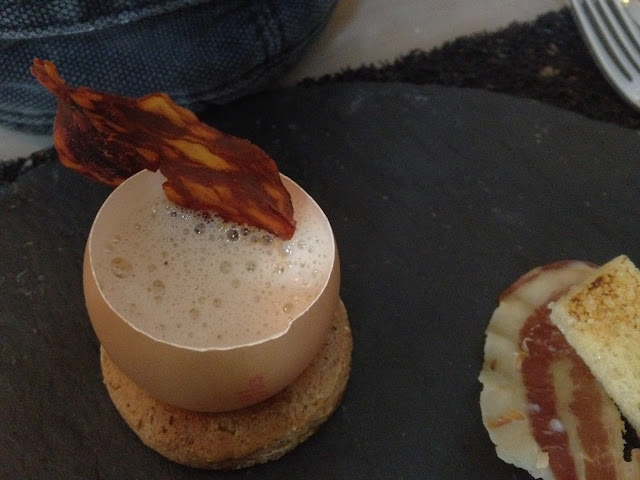 This was our first stop from Gare du Nord. I had high hopes for Chef Mickael Gaignon, who had trained in a couple of Pierre Gagnaire establishments.  So I refrained from gorging on a snail pie at Pain de Sucre as we wandered along Rue Rambuteau.

The restaurant was small, even by Parisian standards; but still cosily elegant with aubergine-tone wallpaper and gentle lights. The menu was equally small, just four or five choices per course, and we opted for the tasting menu, which covered two items from each section. I fell in love with this butter stand; the little hook for the butter knife was too clever. 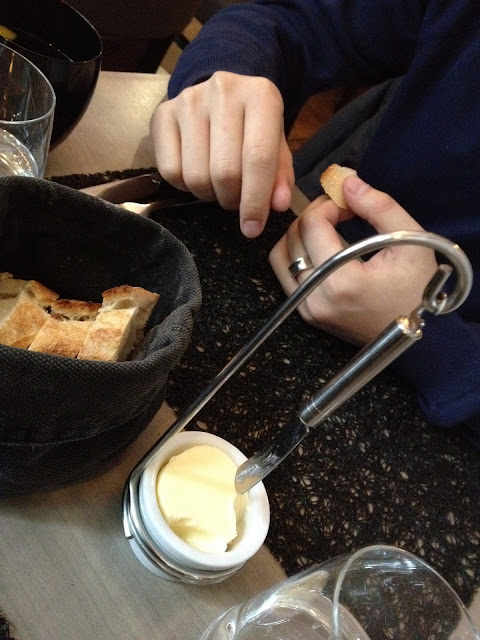 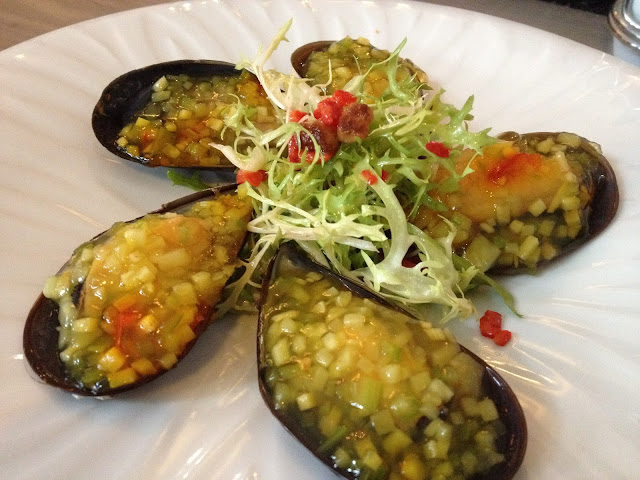 A cold starter of jelly vegetable stock with crunchy celery and plump creamy mussels. Not the most exciting and creative flavours, but the bouncy texture of the jelly melted into delicious soup in mouth gave it a special touch. 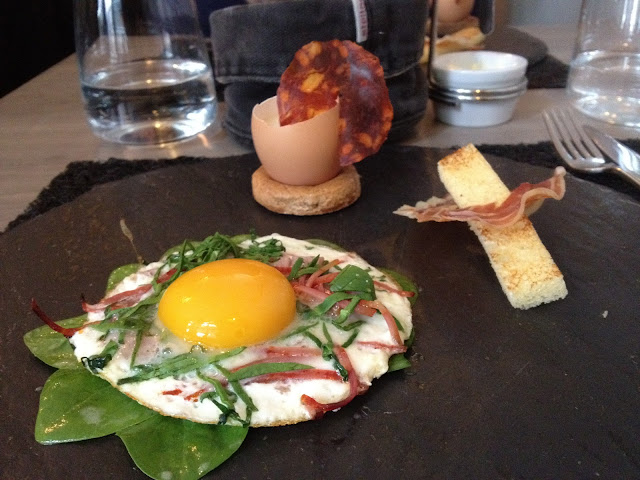 The soft boiled egg was actually gorgeous nutmeg foam, with a gooey, almost cheese-like, yolk set at the bottom of the shell. The other egg-white was fried into a ham and pancetta omelette and topped with a raw egg yolk; this was slightly too heavy with seasoning even with the runny yolk.

I thought this was another take of the English Breakfast at Pollen Street Social, which probably had a slight edge of finesse and sophistication over Le Gaigne's. Still a playful and scrumptious starter. I shall elaborate my addiction to eggs in a later post on The Breakfast Club. 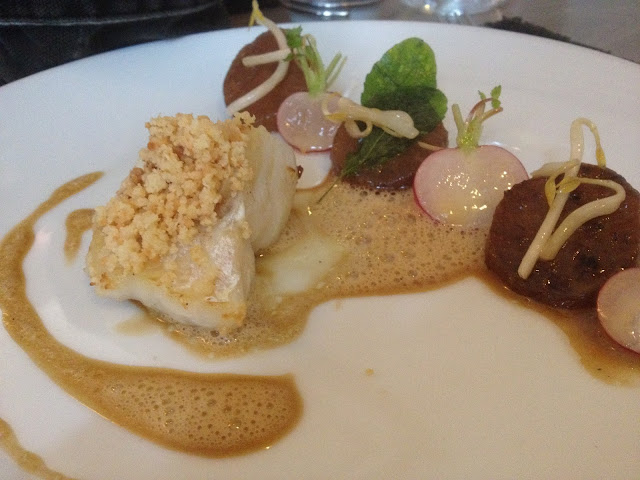 Pollock resembles cod, only it's firmer in texture and holds less moisture. This would easily pass as cod; succulent and slithery flakes of flesh, just marginally under-cooked to retain the juices. The winner was undoubtedly the fragrant, nutty parmesan crumble. And being Asian by origin, I always favour the combination of fish and soy-based sauce, so close to mum's home-cooking. 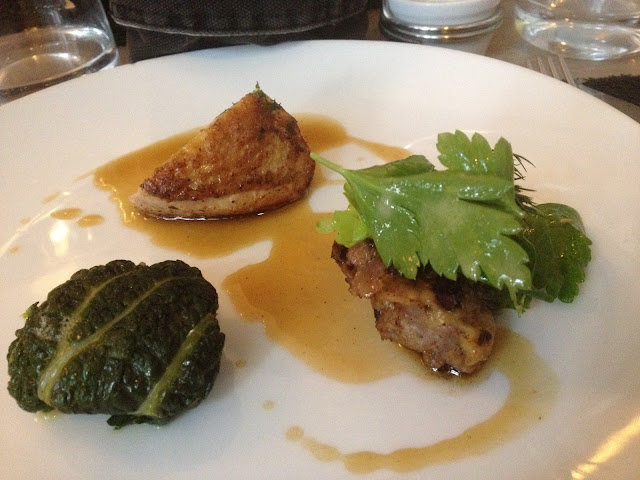 Doesn't the cabbage parcel look familiar? A miniature version of the cabbage cream served at Sketch Lecture Room.  This guinea hen was a thousand times better Gauthier; though not a fan of breast meat, this was soft and moist. Of course not as tender as the grilled thigh, which was full of bounce and juice from the thin sheet of fat under the skin. Simply delicious.

We think the herb bundle was random; Mister had mint and parsley, I had chive, parsley and coriander. Any ideas? 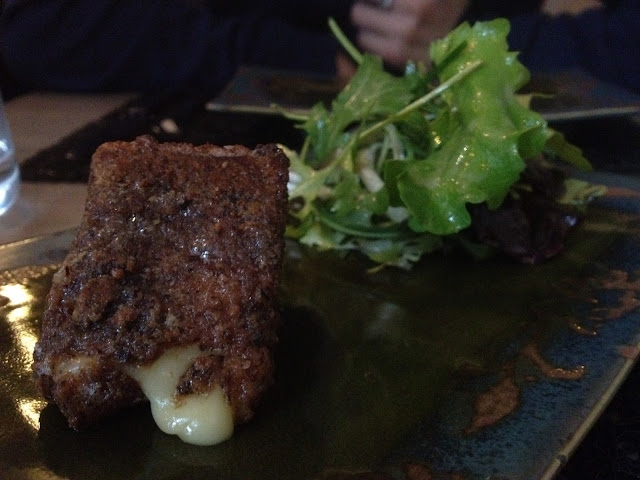 This could be the weakest of the lot. Camembert weren't as nutty as we'd like, the case wasn't as crusty as we'd expected and the hazelnut dust wasn't as pronounced as we'd imagined. It was alright. 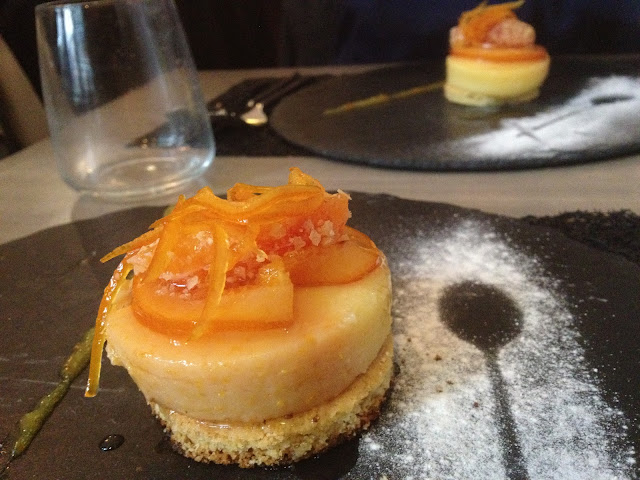 This was complex. Buttery, crumbly base, plus a custard-rich, silky smooth orangey egg pudding, topped with marmalade-marinated orange and a segment of blood orange, sprinkled with popping candy! Loved it.

This was seriously a bargain, all that for 48Euros per person. The food was fantastic, recipes were fun and imaginative with a wide range of ingredients, execution of each dish was precise and skilful. One person looked after the entire front of house, from booking to seating to ordering to serving food and wine. That said we were still very well looked after, with prompt bread basket and water refills. The menu changes every month and depends on seasonality; I might have to keep Le Gaigne on my permanent eat-list.