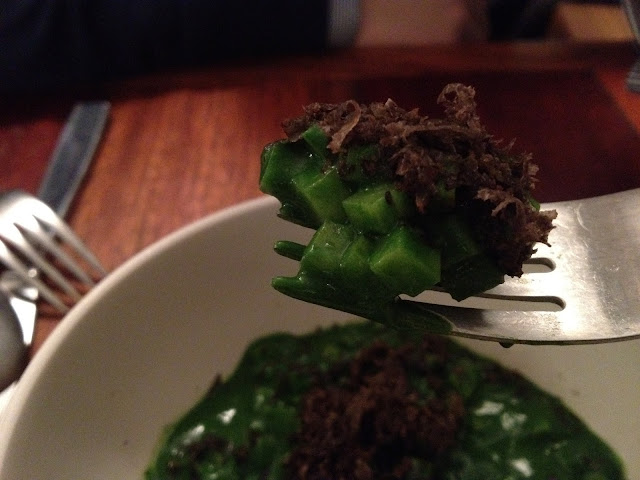 We had to draw up an eat-list before hitting Paris. The aim of game was to get our fix of classic bistro fare, nouvelle French cuisine and state-of-art pastry creations. When I sat there crossing out restaurants / cake boutiques we didn't have time for, I wished I hadn't wasted my previous visits drooling over the latest IT bags, which are all grumpily sitting at the bottom of my wardrobe... I forgot my food camera this trip, these are the best 4S managed.

Top of my list was Le Dauphin. The hopes have been ridiculously high for Le Chateaubriand next door (also the brainchild of Inaki Aizpitarte) ranked 9th on the list of World's best restaurant. Mixed reviews from fellow bloggers meant I was hesitant, so I wanted a trial run at Le Dauphin, where they serve"French tapas". 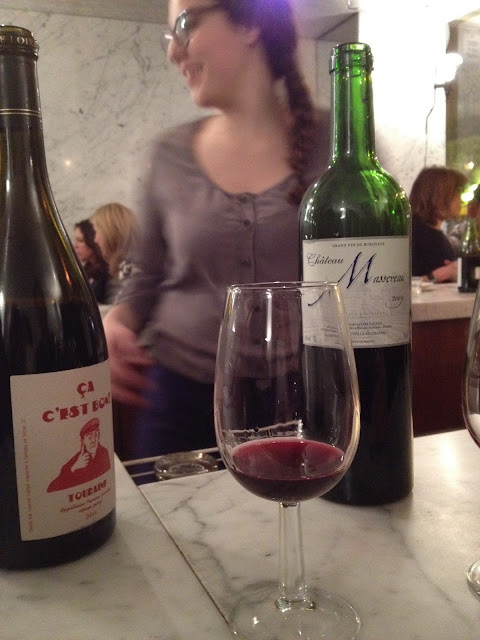 No booking, no first seating - I was asked to return at 9:30 for a queue round the bar for second seating. Probably 12 tables and 10 seats around the bar, and it was absolutely sardine-packed. We sampled two reds by glass at the bar before getting seated. The menu was simply printed on an A4; my French got me as far as deciphering 70% of it and the super friendly waitress helped me with the less conventional items.

Out of the 5 dishes - 1 was oddly interesting, 1 was pleasant, the other 3 were unbelievably gorgeous. So stick with me... 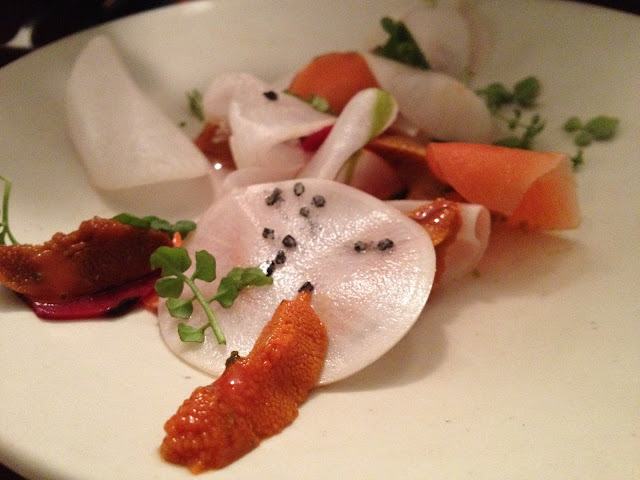 This was the oddly interesting one.

Morsels of sea urchin served with pickled turnip and carrot slices... well, that's it. Not a lot of chemistry; sea urchin was creamy but nowhere near the top-notch king-size Japanese style we're used to. The combination was new to me, but being an anti-pickle person, I thought it was an odd match. On the other hand, Mister thought these were brilliant in opening up his palate. 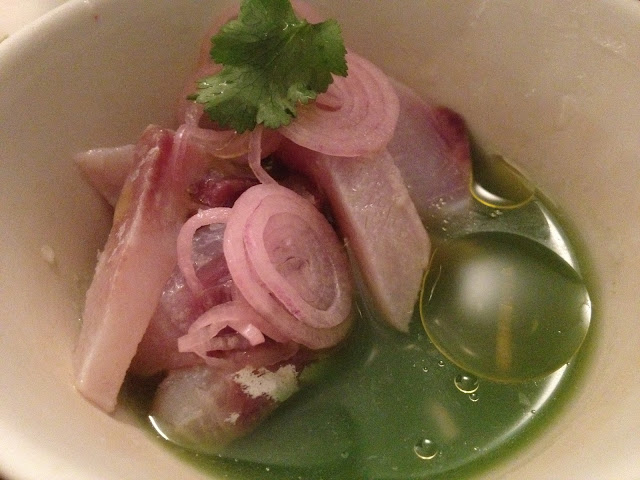 The slightly salted cucumber water was refreshingly cool, went well with the springy and fleshy chunks of raw fish. It made a good starter, though not particular exciting. This reminded me of the salmon appetiser in Texture, where the cucumber water was in the form of sorbet and foam so they "hang" better on the fish. 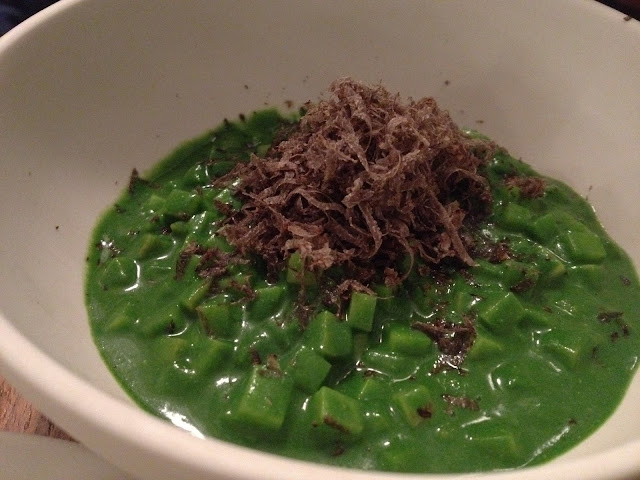 The texture of the mini cubes were nothing like celery, they carried a mushroom-like bounce with a mildly crunchy case. Each cube soaked up the rich essence of truffle and flavoursome stock, finished with a light touch of celery aroma to keep the tastes young. It was one of the most delicious things I had ever eaten.

At first I wasn't sure about 22 Euros for some diced celery, then it got me panicking - it was hand written on the menu. There is a chance I may never see it again. 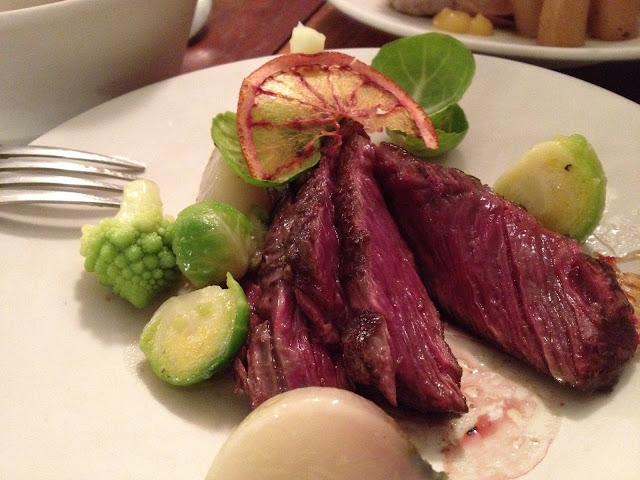 Our waitress told us this Wagyu is a special beef from Spain. Have you heard of this? No, me neither. So we weren't expecting the Jap Wagyu.

The cut and the breed aside, the beef was barely cooked - just the faintest rim of brownness with the deepest ruby meat holding up the juices and flavours. The lean strips of meat were incredibly tender, not to release a mouthful of grease but concentrated beef meat juice. Imagine the meatiness of a dry-aged filet steak locked in the medium-rare ribeye... Argh it was so damn good! 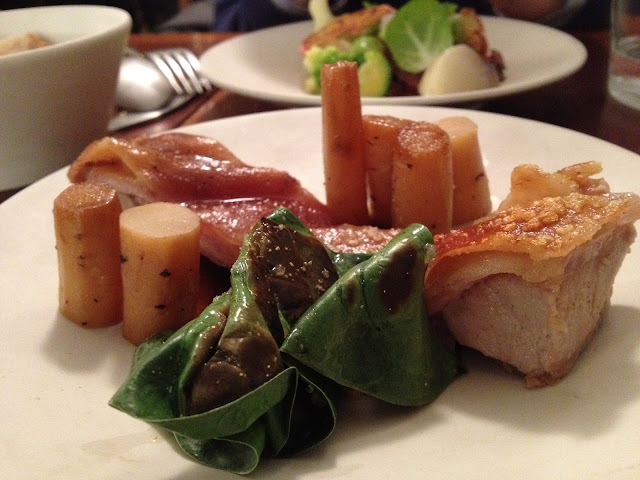 Brittle skin covering a thin layer of lard, followed by a slightly thicker layer of collagen to give that gelatinous, silky texture. The meat was succulent and gentle, carrying a delicate weaning sweetness. Simply as good as a suckling pig can get, roasted to absolute perfection, with a blob of mandarin puree for that little twist.

There were another 6 things on the menu that appealed to me: St Jacques, navets & mandarine, wagyu tongue (langue), tempura de gambas... but after the 6-course lunch at Le Gaigne this was the best we could do.

No doubt about the bold creations of Chef Inaki Aizpitarte; it only took a couple of his dishes that hit all the right spots, and there he got me worrying about my fix of his creations. He just does his magic to nonchalantly remind you why he ranks higher on the world's top 50 than any other French chefs. Just didn't fall in love with Rem Koolhaas' marble morgue decor... Point is, I'm totally curious about Le Chateaubriand now.

You may also like: Santa Maria (Barca), Viajante, Terroirs
at 17:01