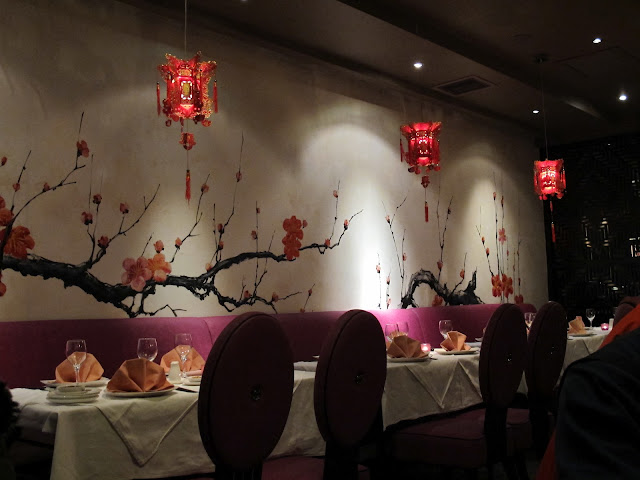 We went to Royal China last time for dinner, so my folks wanted to try something different. Somehow Pearl Liang came to mind. I remember having dim sums here a few years back, but had absolutely no recollection of the food itself, just vague memories of a beautifully decorated dining room with something not clicking. Well, it’s worth a punt if it’s not on my black list.


As soon as I sat down, I recalled exactly why I hadn’t been back – the seats. It is not an issue for anyone else around the table, just me. For a petite person (or just short arse), the chairs are slightly lower than usual. Don’t get me wrong, you can still see me sitting there, just marginally less comfy when picking up food from the centre of the table. 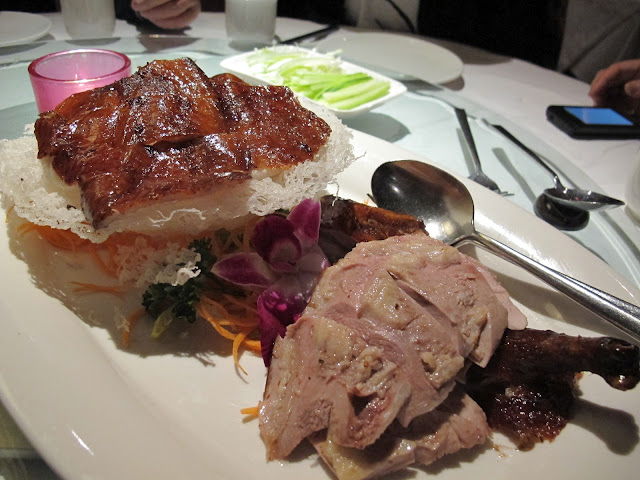 Specifically requested by Dad, on behalf of Bro as I (rightly) suspected. Peking duck is one of my favourite dishes too, much more skilful than the aromatic crispy duck.


Unlike the standardised version in Hong Kong, restaurants here tend to have various interpretations of this dish. Traditionally only the crispy skin is sliced off the duck in a uniform shape and size, served with pancakes, crunchy veg and Hoi Sin sauce. The remainder of the duck is de-boned and the meat is used in another dish or two. 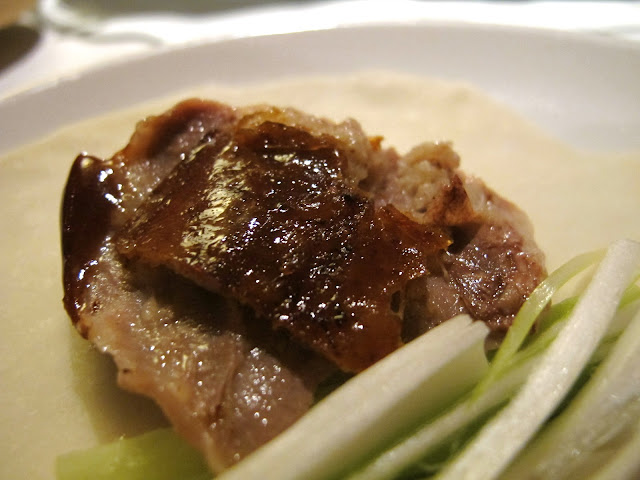 At Pearl Liang, the meat is served as roast duck on the side. I quite like that arrangement. The duck skin was brilliantly roasted to a fragile crispiness with a thin layer of duck fat to keep the juices running. Muscular duck leg on the side was tender and perfectly seasoned. Unlike Harbour City in Chinatown, there were plenty of pancakes for seconds. 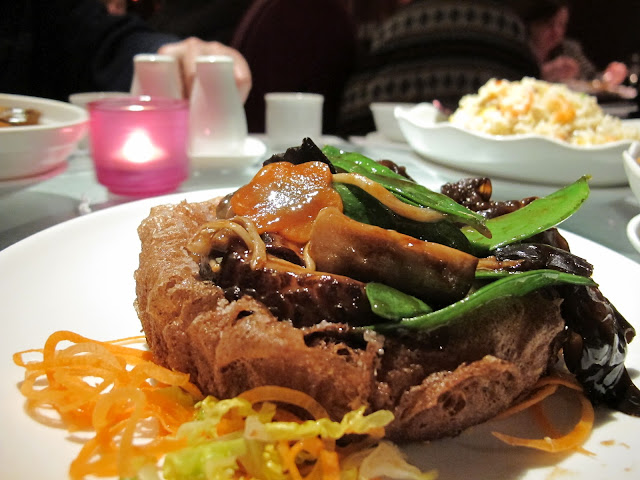 This would have been even more visually enticing had the taro dome been fried to a golden glow instead of a matt brown. Taro mash fried in a fluffy and brittle shell topped with mixed vegetables in a viscous oyster sauce; it’s like a massive vegetarian taro croquette. The mash was probably a bit thin compared to the batter, but overall it was okay. 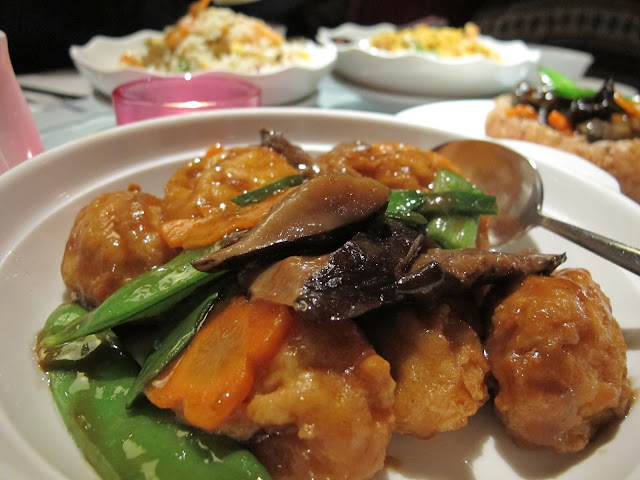 I am such a fan of this braised tofu, yet it’s almost impossible to find an authentic version, for the recipe is rather complicated if you do it properly. The bean curd is supposed to be mixed with either shrimp paste, or fish mince or even pork mince in some variation, but definitely not just deep fried tofu in a thick sauce. The skin is supposed to be softened by soaking up the sauce, married with a soft bouncy texture in the filling. Needless to say I was disappointed with this simple, or lazy, version of deep-fried firm tofu. 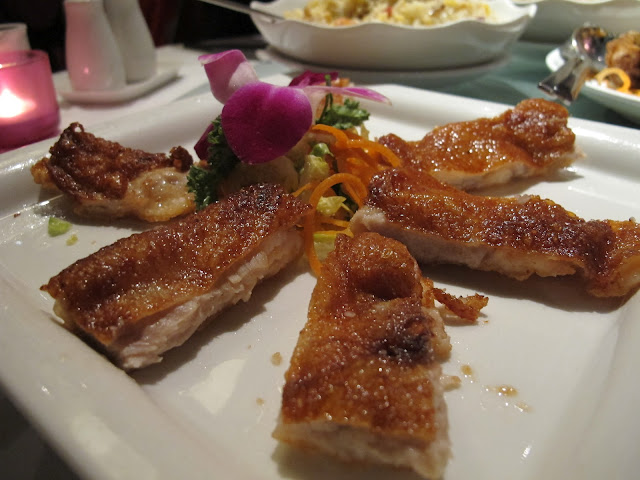 This is where the meal crumpled. I had to wave the manager to confirm this indeed was half a chicken, as priced in the menu. Indeed, he confirmed.


The size / portion issue aside, this is not 炸子雞. Firstly, people do not stuff prawn paste with this classic chicken dish. Secondly, why boneless? A real 炸子雞takes two days of preparation and two rounds of marinade, one for the entire chicken, one for the chicken skin only. It needs to dry overnight, and deep fried twice, often manually pouring boiling oil over the meaty parts to ensure the rest of the chicken remains succulent with a crispy skin. These six pieces of chicken left me speechless.


Chicken was parched and tasteless; frankly we didn’t notice it was stuffed with prawn paste until I looked at the English description on the menu afterwards. Returning it wasn’t an option either; there were 5 of us, each took a piece, all hated it but only 20% of the dish left. I was so upset I wrote to the manager that evening. He explained it was a complicated dish that after the breast was de-boned, there was very little chicken left. My foot! Breast has no bones, and if I stitch those 6 slices up it wouldn’t even make up half a thigh. 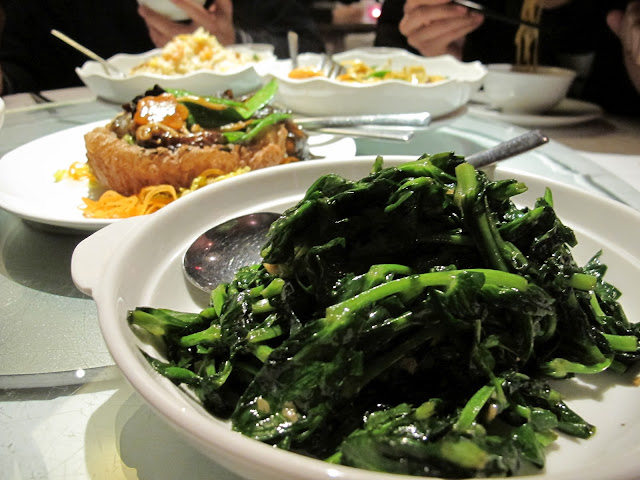 This was relatively well-priced. I could be wrong, but I think Mandarin Kitchen at Bayswater charges 30% more for tao mui compared to other veg (£10.50 vs 7.90); all the seasonal veg at Pearl Liang is around the £8 mark. Not the typical baby shoots we’d be served in HK, but generally good with little grease. 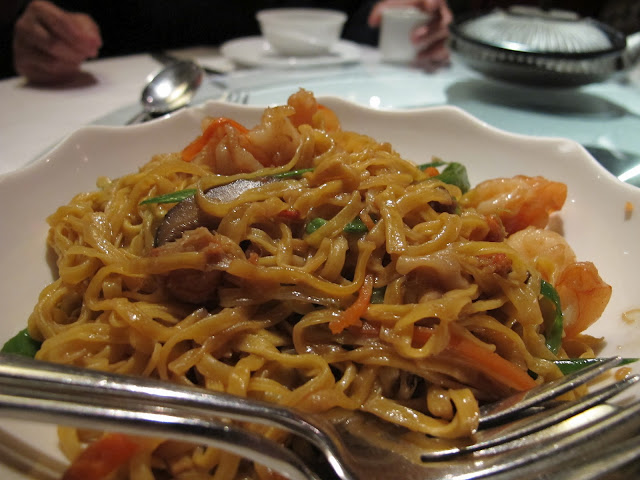 Don’t remember eating this; trust it went down okay. 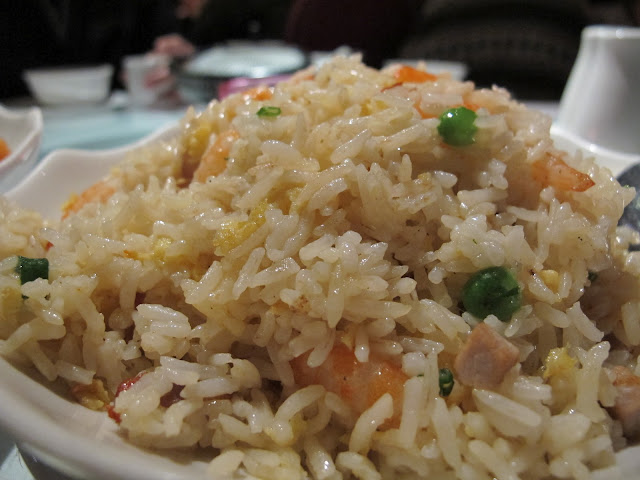 Dad voted this as the highlight of the evening. Like I said for Dishoom, it can’t be great when the best part of the meal is rice. That said, this could be the most authentic special fried rice I’ve had in London; moisture of rice was just right, ingredients, their proportion and seasoning were spot on. Like paella, special fried rice has defended its definition, so it’s not just any odd combination.


One of the reasons for my disappointment with Pearl Liang is that the Chinese name of the dishes hugely differs to its English translation. Interestingly while the English description is accurate to a certain degree, they are misleadingly paired with the names of some well-established Chinese dishes. I feel the kitchen has underestimated the complexity and sophistication of some Chinese classics, and went overboard with gimmicks for others. All in all, just another dolled up room for “Britain-ised” Chinese cuisine.

You may also like: Shanghai Blues, My Old Place, Dumpling Legend
at 02:16