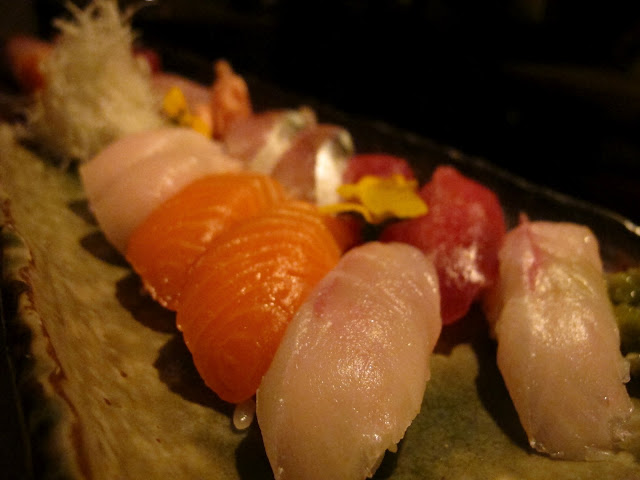 Frankly since Sake No Hana I had lost faith in Mayfair Japanese restaurants without official accolades; the only reason for booking Senkai is because Yashin was booked up, and I wanted to treat my Bro for something more extravagant to celebrate his scholarship.


Senkai is the ex-Cocoon. It has replaced pan-Asian fusion with Japanese-inspired cuisine. There is nothing Japanese about the décor; we were greeted and de-coated at the ground-level entrance, where the bouncer was stretching his calves by the door. Then we were led up the dimly lit, earth-orange toned spiral stairs to an equally dimly lit dining room; it was MEATLiquor kind of dark. Ambience was mellow and definitely romantic.
We were offered still or sparkling water, neither arrived until we asked again, twice. Service was so bad it was bordering on comical. I was interested in the sushi & sashimi platter, so we asked our server what was included:


Server: Ah that’s 30 pieces of sushi and sashimi
Me: (yes, thanks. I can read) Yes, but what’s included in the platter?
Server: Well sushi and sashimi of course
Me (Duh…): Thanks - what sashimi? Like what fish?
Server: You see the 10 sashimi we have here, it can be any of these because it’s a surprise!


I think Senkai is pitching itself as a high-end restaurant, surely the prices seem so; then why am I getting retarded services? Ideally the server would commit to finding out from Chef as opposed to bluffing this ‘surprise’ bullshit… Assuming it’s the ‘freshest of the day’, Chef has had 20 hours of the day to decide on the selection, so what’s the challenge here? I wasn’t being a difficult prick, I just wanted to order the extras that weren't on the platter. 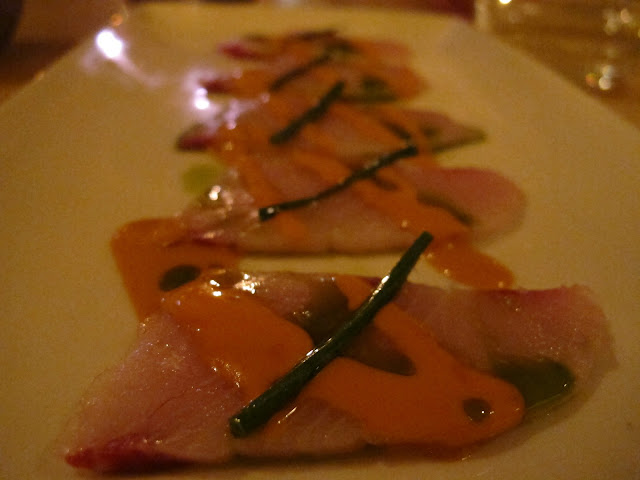 We started with some ceviche and tatakis, both of which turned out to be absolutely superb. The tiradito was dressed with a mildly spicy sauce that was toned down by the coolness of the dish and it didn’t overpower the delicate flavours of the yellowtail. The slithery fish almost dissolved to leave its aromatic oils trailing behind. 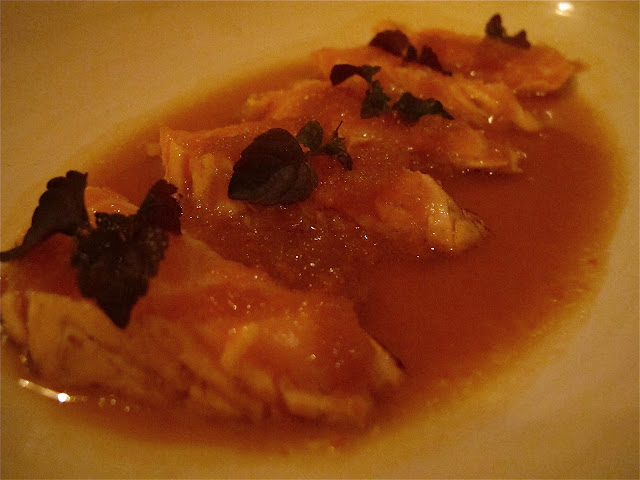 Wafu sauce was very similar to yuzu, a grapefruit based dressing with a gentle citrusy kick, minus the unpleasant bitterness. It went beautifully with the slices salmon, softly seared on the outside with a raw centre of distinctive bands of fat against the brilliantly orange fish. The light acidity in the wafu sauce lifted the luscious raw salmon and finished off with characteristic shiso fragrance. My favourite of the evening.
Wagyu rib-eye with Japanese rice 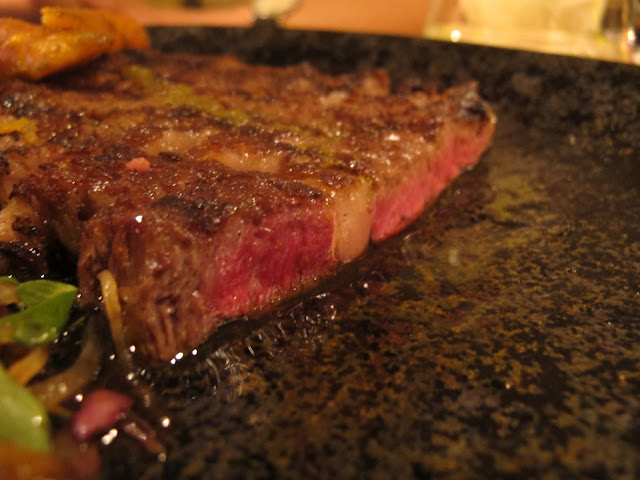 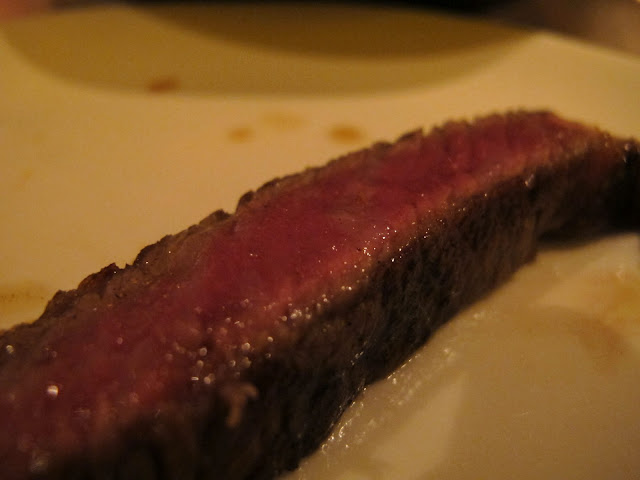 There is no refusing to Wagyu beef. It doesn’t say which grade, but let’s be realistic about it, at £65 a pop I am not exactly going to get the best of A5 grade marbled Wagyu and the rib-eye cut too; £65 probably won’t even get me the rump of an A5. Nonetheless it was still a gorgeous piece of steak, packed with globules of melted fat oozing from the deep ruby meat. Though it didn’t quite dissolve away on tongue, it was like chewing on a softer “chewits” made with beefy bovine fat and juices, hysterically satisfying. It could do with less, or none, of the curry powder-like seasoning though.
Chef sushi & sashimi (30 pieces) 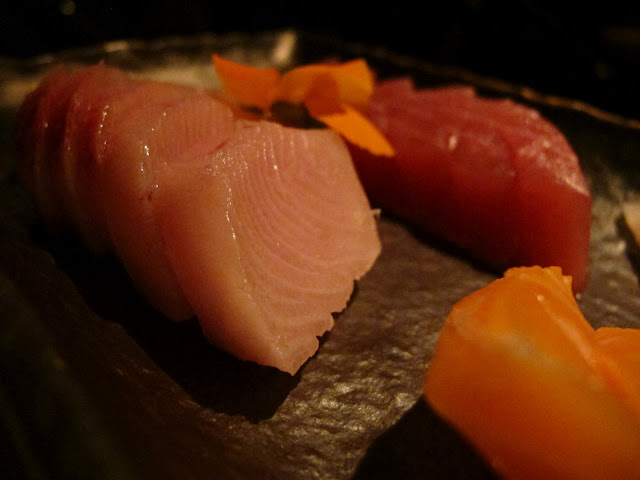 The actual items appeared on the plate was disappointing. Then again I should have seen the warning signs flashing when the server refused to spell out what was on the plate. However the quality or grade of fish was absolutely first-class. We got 5 thick slices of Yellowtail, Akami Tuna, Sea Bass and Salmon sashimi, and 10 pieces of salmon, bass, bream, tuna and mackerel sushi. You see, had I known this was the combination, I would gave gone for Ikura, sea urchin and scallops as individual orders.


Anyway the yellowtail sashimi was particularly good, it was so rich it felt like chewing a sac of fish oil encased in super bouncy flesh, bursting with freshness and healthy oils. Tuna akami, the leanest loin cut, was also outstanding with intense fishy flavours plus a hint of mineral tone. 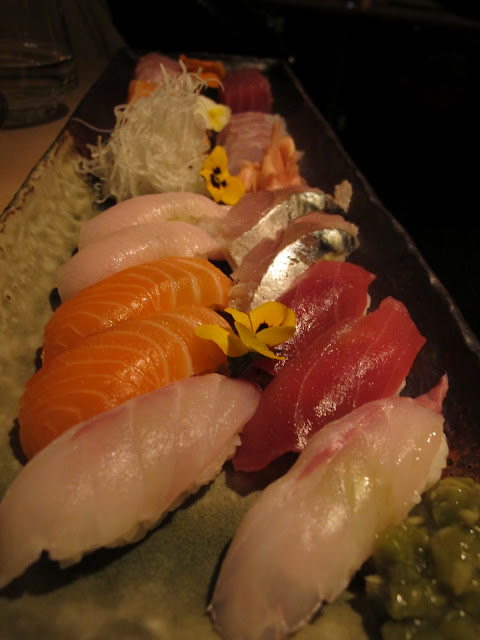 Sushi, however, was less impressive as the rice ball crumbled with a light squeeze, which means I couldn't dip the fish into soy sauce by turning the sushi upside down without it falling apart. They were super mini-sized too...
None of the staff were Japanese, so I’m highly sceptical of Chef being one. Or even a qualified Itamae in this case. Sashimi were poorly sliced, I had a piece of yellowtail that was an inch thick, while Mister had a few half-inch versions. And all the fish were treated with the same cut, neglecting the tendon patterns and fat distribution of the fish. That said, I reiterate the quality of the fish itself was supreme. 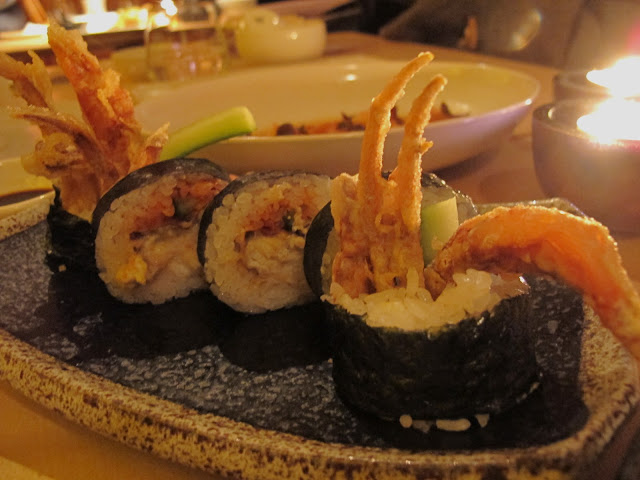 The soft shell crab was excellent, possibly the meatiest I have had with a pretty light batter. It needs something softer in the middle to juice this roll up, ripen avocado or some chilli mayo would do the job.


I am prepared to pay a considerate mark-up for sushi / sashimi, because I am also paying for the skills of the Itamae, exposing the potential of each fish to the max with his knowledge and experience. Otherwise I could just buy a massive hunk of sashimi grade tuna from Billingsgate and munch on it like a burger. Clearly the itamae here is not up to scratch, but luckily didn’t ruin the sashimi too much.


I know I have been critical, but most of the food here at Senkai was actually excellent, and the quality of ingredients was fabulous. It’s just with the prices they are asking for, I would expect everything to be spot on, and they weren’t quite there. Service was particularly appalling, it was almost impossible to get any attention as the room filled after 9pm, by then both the music and chatter got louder and it took 25mins to settle the bill. Given the limited choice of raw fish (the iconic O-toro is nowhere to be seen on the menu) and the amateur skills in the preparation of sushi, I’d say Senkai is more of English-Japanese with a suited and booted clientele that concentrate more on their hot blond dates than the food on plates.