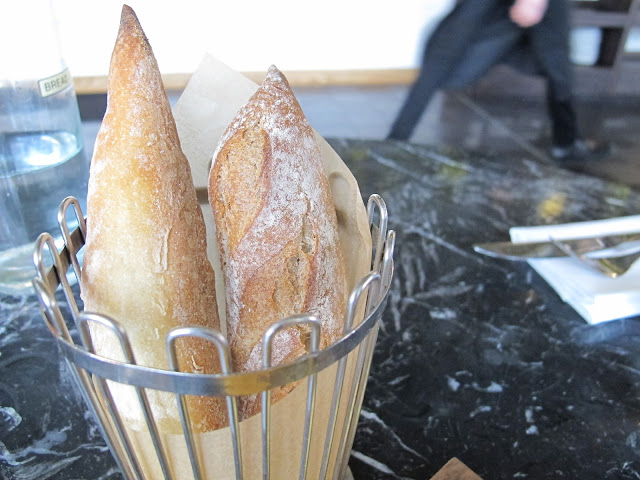 I used to be a small fan of Gordon Ramsay, and when he spoke fluent French on one of the kitchen nightmares, I was sold. But then the shows got repetitive and he kinda shot himself in the foot when he failed half his recipes challenges on 'the f word'. More importantly his restaurants weren't living up to the reputation.

Bread Street Kitchen opened about 6 months ago as an all-day diner. It generated enough talk of town with its ultra east-london-industrial-trendy decor in its massive 2-storey restaurant - b&w tiled floor, super high ceilings with white tiled walls and exposed pipes, contrasted with mustard yellow leather sofa and vintage lamps dotted around the place. In short, nothing like the regular GR.

We were seated in front of the kitchen to watch the chefs at work, mostly churning out the short-rib burger. The menu is roughly divided into raw bar, wood-stone oven and hot kitchen.

One of the best things about raw salmon is its silkiness with rich oils. This ceviche has completely missed the point. Either the grapefruit marinade was too acidic, or the fish was marinated for too long, the fullness of salmon was replaced by coarse textures. The cut was very odd too; unlike the chunky slices Ceviche in Soho served up, these were like salmon trimmings or scrappy thin pieces near the tail. The only positive was the small cubes of grapefruit, which tasted exactly like the salmon. 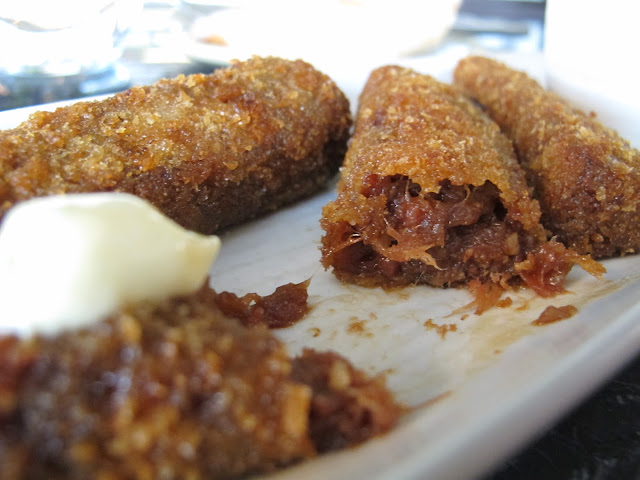 I wasn't really expecting little spring rolls, but nevermind. The rolls were still glimmering with oil which is never a good sign with deep-fried dishes.

First bite wasn't too bad, like roast pork puff without the barbecue sauce, mushy pork and bits of whatever jammed in a greasy breadcrumb shell. Then the salt bomb hit home; the filling was so over-seasoned I thought about spitting it out - no I didn't, instead washed it down as if I was swallowing a pill. And there was no chilli in the mayo, I think it was just there to douse the salt. This failed on all levels. 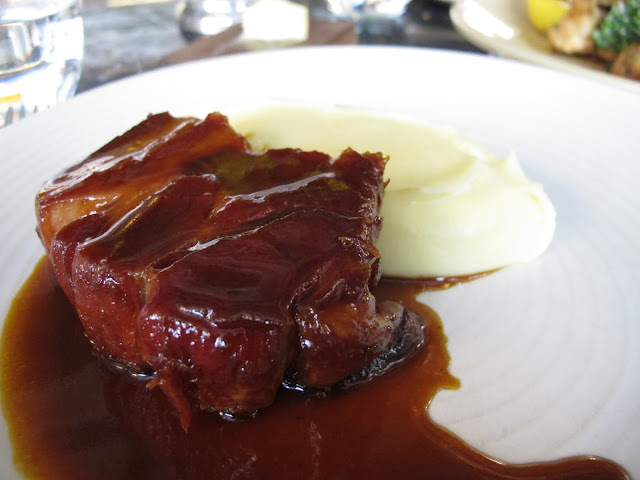 I'm no piggy expert, so I don't know the difference between pork collar, neck and shoulder; these parts don't look too distinguishable on a pig. This look like pork belly, no?

The meat was alright, lean meat sandwiched with sticky cartilage and some translucent lard. The sin in the dish was this sugary, viscous glaze. Firstly if there was no mustard in it, the word shouldn't appear on the menu. Secondly it was dead flat, like some cheap sleazy plastic sauce that rubbish Chinese restaurants drown their lifeless, frozen meat in. Did I make it clear it wasn't great? 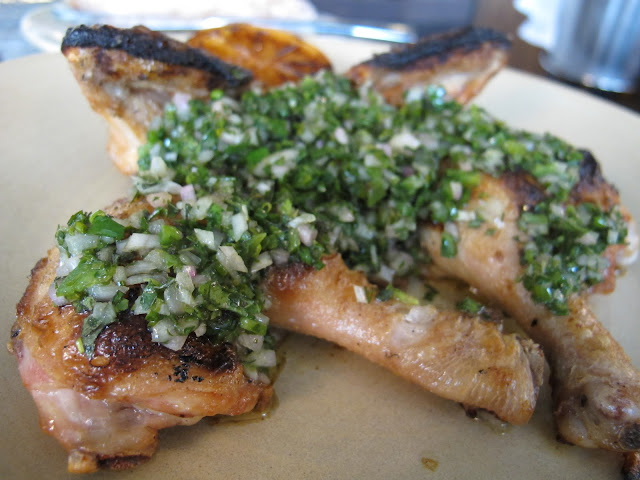 This felt like Nandos, which is a pretty accurate summary. Just half the size, double the price, without sides and came with 12.5% service.

And the burnt lemon?! Look sliced honey-glazed lemons are gorgeous when grilled, but what was the point of plonking half a charcoaled lemon on the plate? Did they use it to clean the grill and thought I wanted the evidence?

The only one thing I enjoyed were the in-house baked mini baguettes, which were similar to the ones at Viajante. Everything else was so disappointing. Should I have gone for the short-rib burger that everyone else had? But my stomach is not ready to take in any form of burger after Lucky Chip. I'm so tired of these so-call TV chefs dolling up places and serving crap... so GR's posh joints aren't bringing in the cash, he starts milking the wider public. No Gordon, overpriced food doesn't taste better.