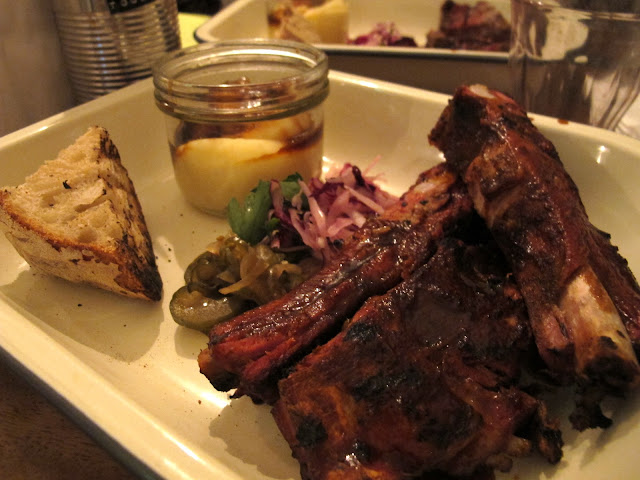 No I never tried their meat truck under the bridge, and American BBQ has never been my thing. I always thought barbeque should be something done with family and friends, huddled around the garden under the sun, with bubbly flowing and rabbits hopping. But everyone is talking about Pitt Cue Co., mostly about how gorgeous the ribs are, some about how ridiculous the queuing system is.


And the queue was ridiculous. 8pm Saturday, we thought we were lucky to see a short line of 10 outside the tiny restaurant in the corner of Carnaby Street. It took a good hour to get us to the door, where the guy with a clipboard took our names, smuggled us into the tiniest bar in Soho and informed us it’d be another 1-1.5hr wait. Seriously?


The pain of waiting and hunger gradually eased up with a couple of cocktails. New York Sour is not my kinda cocktail, whiskey sour topped with a splurge of red wine was a little too 'upfront' for me. 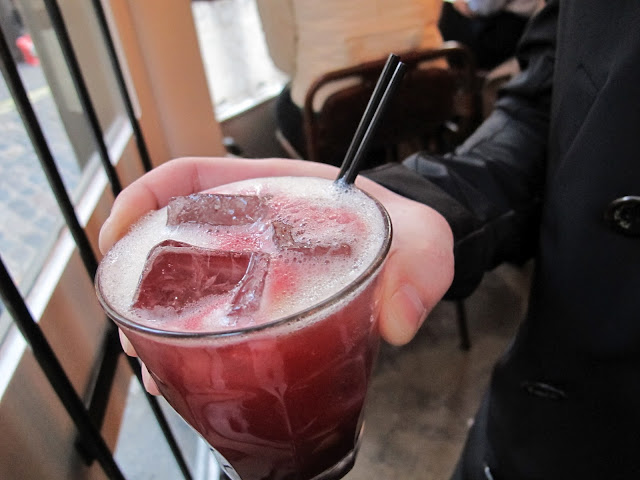 More than an hour later we were led downstairs to where the eating happens, which was equally tiny with tables crammed as close as rush hour tube. Apparently there were 30 covers, but I could only count 18 including the 4 awkward seats at the bar... There were 7 items on the menu, I wanted all of it, mainly because I was under the influence of alcohol on an empty and shrivelling stomach.

Everything came in these 60s’ prison-style white enamel trays, like everywhere else in Soho at the mo. And it felt more like a prison meal than ever, because the one tray has all; a bit of bread, a bit of room temperature salad and a bit of pickles.

4 large, super meaty ribs. The marinade penetrated through the meat and well into the bones, leaving the ribs juicy and flavourful without drowning them in sauce. Meat hung well on the bones, easily fell off with a bit of gentle tearing, but not to the point of mush. These were wicked ribs, no doubt. But did they bowl me over and got me grinning like an idiot? I probably wouldn't go that far. 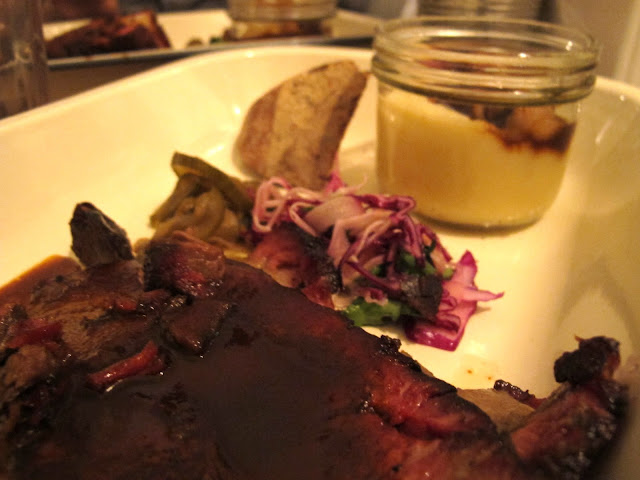 The brisket was sliced like roast beef and was exactly like char-shiu (roast pork). Meat was soft and oozing with smokiness. And just like char-shiu, the best bit was the slightly charred, crispy edges with a small strip of melt-in-mouth cow fat...

The mash was kind of disappointing. I couldn't pink up any hint of bone marrow richness, it was more like thicker-than-usual gravy with ordinary mash. 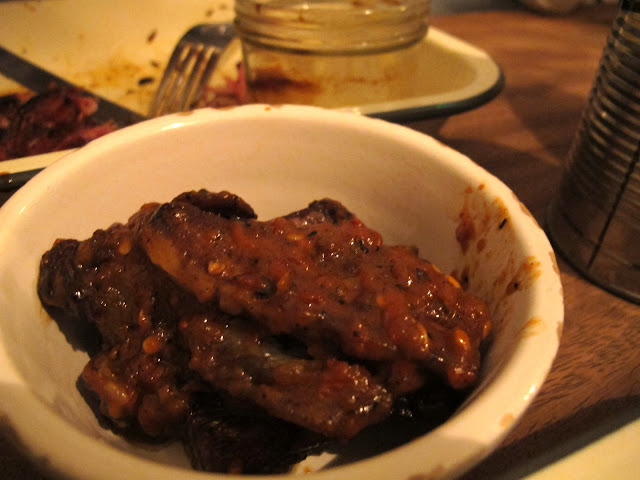 Seeing we already had pork, we went for beef ribs on the side. And by hot, Pitt Cue means explode-in-mouth-and-set-your-tongue-on-fire hot. The heat wouldn't go away, regardless of gulps after gulps of beer, and worse still it freaking spreads; it felt as though I had thousands of pins poking my lips, my tongue and all the way to the back of my throat. Yet it was addictive; I ended up scraping the spicy sauce off and smothered the tips in the syrupy bbq sauce...

I enjoyed Pitt Cue, ribs were great, marinade was spot on, the buzz was intimate Soho. Just not sure if I'd wait another 2.5 hours for it. I mean good ribs aren't that hard to come by, and if we benchmark these against the ones in the States...they wouldn't even survive as a truck vendor. I didn't fall head over heels, purely because there was nothing spectacular. That said, Pitt Cue does simple things well, and I wouldn't mind dropping by for a quick lunch in a quiet afternoon.

You may also like: Lucky Chip, MeatLiquor, Polpo
at 23:56