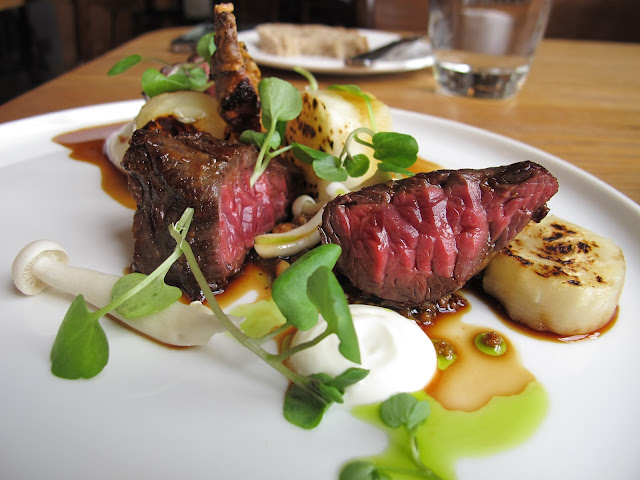 I've had Corner Room on my list since its low profile days; I discovered it by word-of-mouth that they 'secretly' served brunch, as a side project of Nuno Mendes besides Viajante. Then I was distracted by too many things and CR was pushed lower and lower down my list... until I noticed it is now 'publicly' serving lunches and they take bookings too. 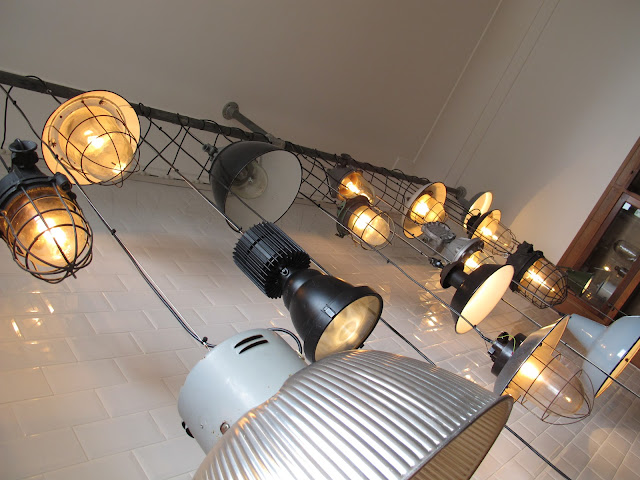 CR was literally a room in the corner of the Tower Hall Hotel, perhaps slightly bigger than a usual corner room, but genuinely nothing more than a rectangular space with a few tables, and of course the wall of hanging lamps. Unlike the blind tasting menu at Viajante, CR has a small menu of 6 items per course. Long gone were the smoked salmon & eggs and poached eggs with chorizo...
Squid with buttermilk & asparagus 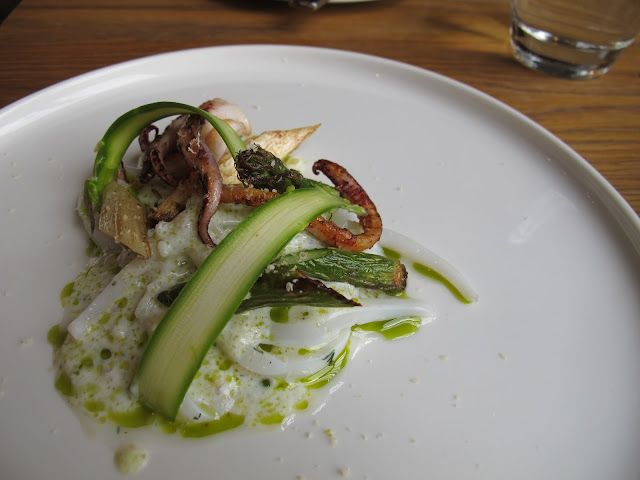 The squid were presented in two ways. The roasted tentacles were full of bounce on the outside, then broke into a slithery jelly on the inside, bursting with smokiness. The body of squid was cut into thin strips, barely cooked to retain its squidginess, submerged in the lime-infused, rich milky sauce for a palate-awakening start.
Venison & Salsify 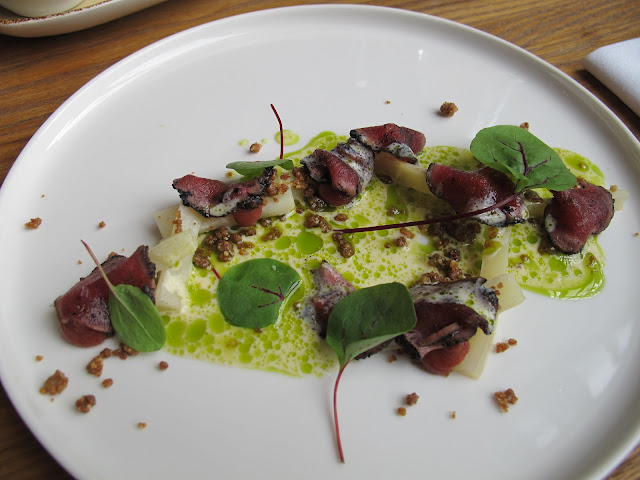 This was on 'today's special', which probably meant venison was looking irresistible on the day. The controlled chaos brought me right back to Viajante.
When the dish arrived I thought venison must have been irresistible AND scarce on the day. The small carpaccio of venison was mild in gamey flavours, almost as if the venison was an accessory to the little blobs of beetroot puree, but it worked. The underlying creamy jus was gorgeous, not dissimilar to the one in the squid above, minus the citrus kick. I would remove the brown 'rice crispies' though, not sure what their contributions were except for spoiling the smoothness of the dish.
Cod with clam porridge 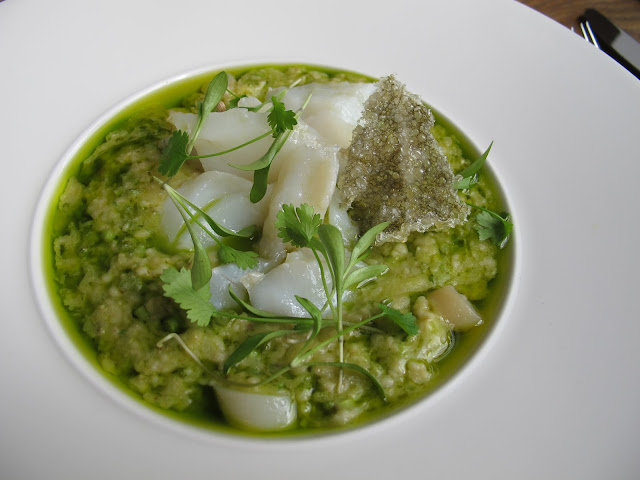 There was so much going on in this little bowl I don't even know where to start - it was just stunning. The heady flavours were led by punches after punches of refreshing coriander, complemented by chewy textures of broken wheats mixed into the porridge.
Diced razor clams were hidden among the chopped spring onions and coriander, and each time I came across a bouncy clam cube, I'd let out an involuntary "hmmm" with the biggest grin of utmost satisfaction. The razor clams were insanely sweet, unleashing juices that fused and lightened the savoury porridge. The cod was equally impeccable; the thick slices dissembled into their silken flakes with a soft poke of the spoon, yet held its firmer textures to release its freshness.
Honestly I can barely put how mind-blowing this porridge was into words, and trust I haven't done it justice. Yes the green layer on top was extra virgin olive oil, and it was quite a weighty dish but I pretty much licked it clean.
Onglet Steak with celeriac & tarragon 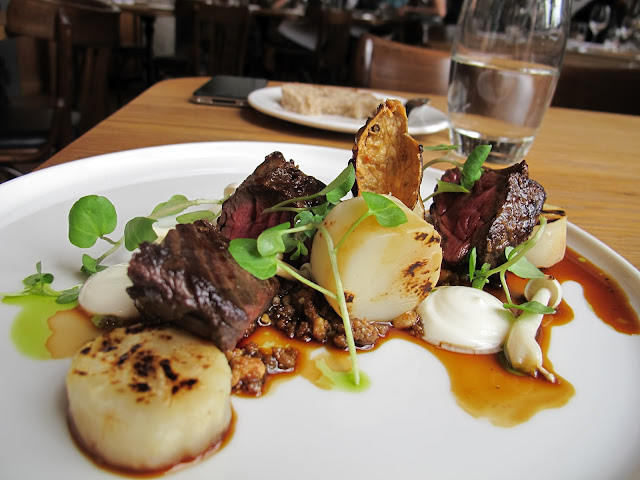 I'm a bit short of words again. Thinner beef cut rarely get me swooning, purely down to personal preference of beefy grease to muscle flavours. But this little piece almost had me converted; the meaty flavours were so powerful, as if it had sucked out the flavours from the neighbouring flank and loin.
I think I detected a gentle hints of star aniseed in the seasoning, which helped to amplify the tang, and I like the subtle fusion of Asian touches with the deep-fried sun-dried mandarin skin. Genius.
Rhubarb with buttermilk sorbet and white chocolate 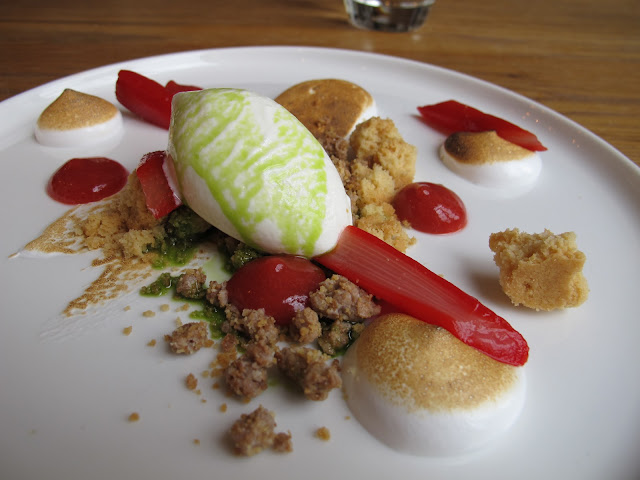 All kinds of weird and wonderful things were happening on this plate. White chocolate was actually toasted / melted marshmallow blotches around the plate, and they were made even better with the sharp rhubarb jam. The vibrant mint extract was a nice touch to keep things extraordinary, but what raised my eyebrows were the buttery crumble that dissolved in mouth.
Apple & Hazelnut with frozen pannacotta 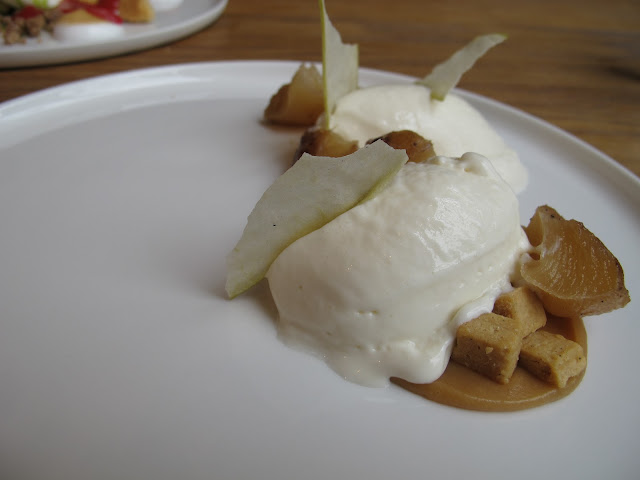 Roast apple can't go wrong with melting ice cream; frozen panna cotta was much more akin milk ice cream than panna cotta. The salted hazelnuts had interesting chemistry with cookie dough cube and dulce de leche... Alright, visually it's not as dramatic and in terms of surprises this probably didn't rank as high as the rest of the meal, but still a freaking good end to a long lunch.
I walked out of Corner Room as if I'd met someone absolutely flawless, found myself dumbstruck and rendered speechless (except I squeezed a few hundred words out of my boggled brain). More interestingly, I walked out feeling I'd robbed it - £21 for 3 top-quality courses (£17 for 2) plus just £1 pp as cover charge inc. water.
The quality, creativity and execution of dishes were as high as Viajante, which, by the way, is already amazing value for money. Okay, Corner Room doesn't offer the Iberica ham infused butter with out-of-this-world baguettes; the 20-ingredients-in-one-bite amuse bouche; nor the live chef shows that Viajante proudly shows off, but we get to choose from a menu here. Plus the intimacy and comfort of casual dining.
I felt so smug sitting in that corner of Corner Room. Did I mention Nuno Mendes is a genius?
Corner Room
8 Patriot Square
London
E2 9NF
Tel: 0207 871 0460

You may also like: Le Dauphin, Pollen Street Social, Texture
at 03:40