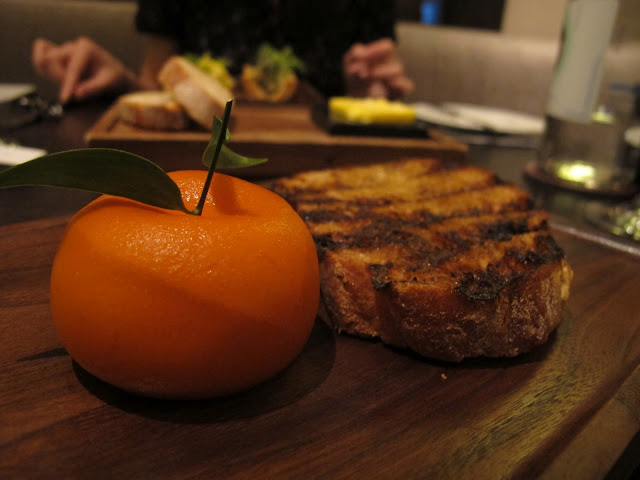 We booked months in advance to celebrate Mister’s change of title to Doctor. Circumstances have changed, and this meal also became our farewell bid.


All emotional baggage aside, the timing for visiting Heston’s London restaurant was rather perfect – in line with the release of World’s Top 50 restaurant. Heston Blumenthal is still on the list; but Dinner by Heston ranked 9th on this year whilst The Fat Duck fell all the way down to 13th. Interesting.

Mandarin Oriental in Knightsbridge; it’s the kind of location you’d fall in love with instantly – modest grandeur. The restaurant carries a similar understated splendour with the glowing warm cream walls comfortably contrasted with dark chocolate brown furniture. The best feature was no doubt the kitchen on display, where rows of whole pineapple slowly rotating against the wall, waiting to be our dessert. 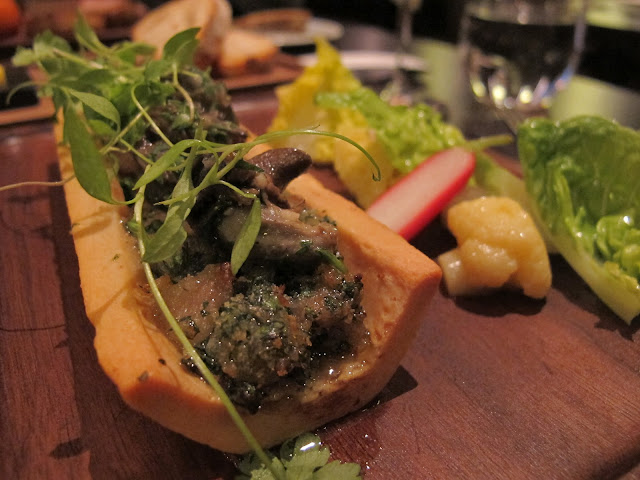 There was something complementary about pairing the two together; the earthy tones of snails were gorgeous with the melt-on-tongue bone marrow, which added a fullness to the seemingly familiar combination of parsley butter and snails, all garnished with an oomph from the restrained anchovy tingle. The trail of rich oils left me yearning for more.

I contemplated the savoury porridge too, if it’s good enough to be on the Fat Duck’s menu then it must be something, right? But then Heston decided to go with cod instead of snails here, so Meat Fruit won the fight. Waitress kindly pointed out that everything on the plate was edible except for the wooden board and green stem. 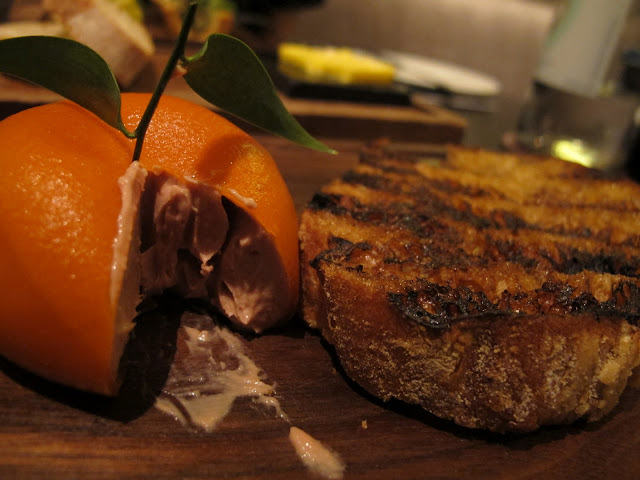 This was simply ingenious. We already knew what to expect, yet when we saw the flawless mandarin perched on the board, I couldn’t help being overwhelmed.  It didn’t just score 10/10 on idea, the textures and flavours were stunningly perfect too. The liver parfait was smooth as gelato, with the richness of room-temperature butter, and its weightiness just about reined in by the subtle mandarin jelly skin that brought an undertone of fruity bitterness. Creamy, indulgent, sinful.

I’m almost certain it wasn’t butter that glazed the bread; it had much more fatty fragrance to it... chicken fat? 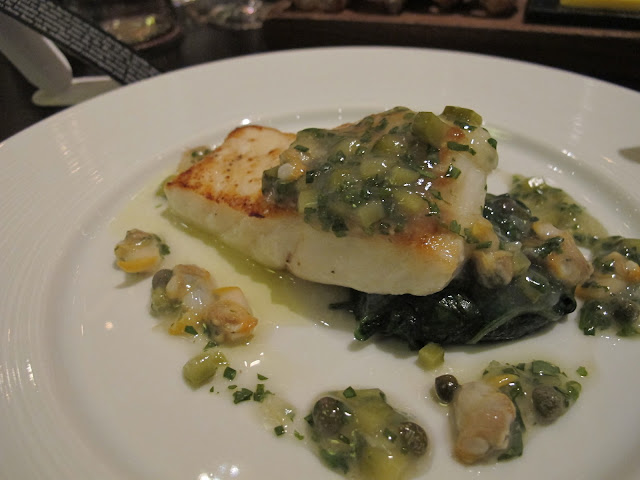 I once had the most perfect turbot; its wing steam-roasted in tinfoil with simple seasoning, parsley and lemon. So this was a natural choice. Can’t say I wasn’t disappointed to see it wasn’t the squidgy cartilage-packed turbot wing on the plate, but a glimmering fillet of loin instead.

It’s not my favourite, I prefer much flakier and delicate textures; this was soft yet firm. Like most white fish, flavours were mild, mostly overshadowed by the punchy cockles ketchup. It’s sauce that had either clicked with your tastebuds or glanced past it. For me, it didn’t quite make the impact, a bit too glutinous, a bit too much crunch from the veg, a bit too scarce on the cockles and hence a bit too weak on the oceanic touch.

I’m coming back for the black foot pork chop next. 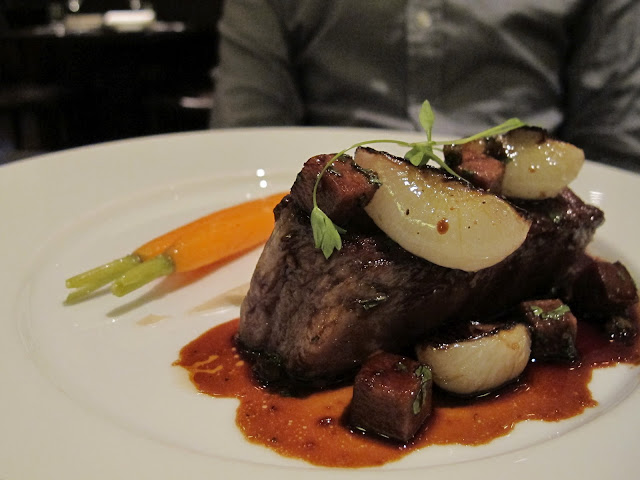 Since this was on the specials menu, I didn’t quite capture everything in the description, it was the 50-hour cooking in low temperatures that caught my attention.

The knife sliced through the meat with no effort, this could have been more tender than the turbot. The meat revealed layers of half-melting tendons sandwiched between the juicy muscles, with a thin margin of dissolving fat. Unlike typical slow-cooked dishes, the rib meat locked in all its flavours and beefy goodness, together with a strong essence of smokiness, as if it had been chargrilled for hours. Skill.

I couldn’t hide my grin when maitre’d pointed out the triple cooked chips are not available that evening because chef wasn’t happy with the quality of potatoes. The mash on the side was great, but still nowhere as great as the buttery Joel Robuchon version. 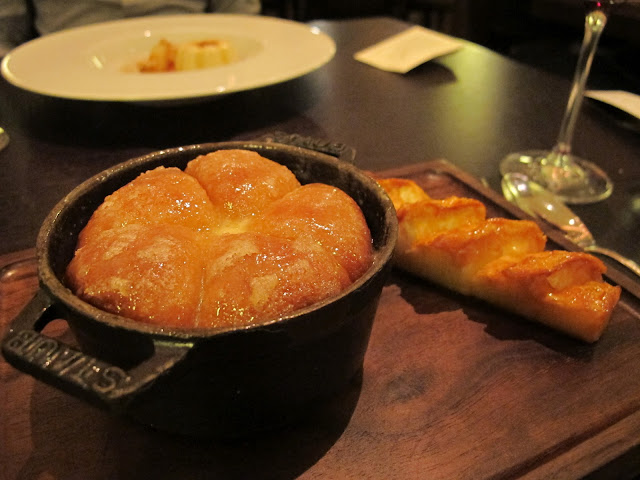 We were advised the signature tipsy cake takes an extra 30mins to prepare, as the whole pineapple needs to be spit roasted. Considering Heston chose a pineapple as his logo, this was definitely a must-try.

The top half of the brioche-based cake was airy and oozing with buttery fragrance; bottom half was soaked in light syrup, which was almost too sugary if not taken with the roasted pineapple chunks on the side. The natural fruit acids were mellowed after the roasting, which retained the juices in a crispy shell. Why spit roasting the entire pineapple is beyond me, but it looked good. 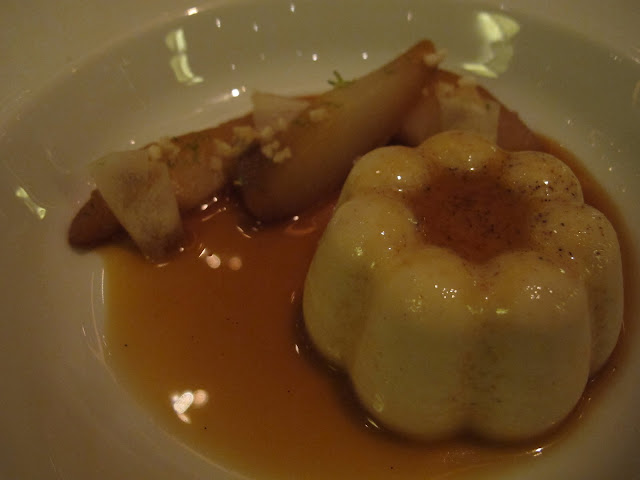 This felt ordinary. Yes the pudding was having a good shake on the plate, but it was still crème caramel, and probably not even the smoothest I have had.

On hindsight, I would have gone for the brown bread ice cream, where they bring the entire nitrogen gear on a trolley and make the ice cream on the spot.

We finished off with dark chocolate ganache, courtesy of Chef. 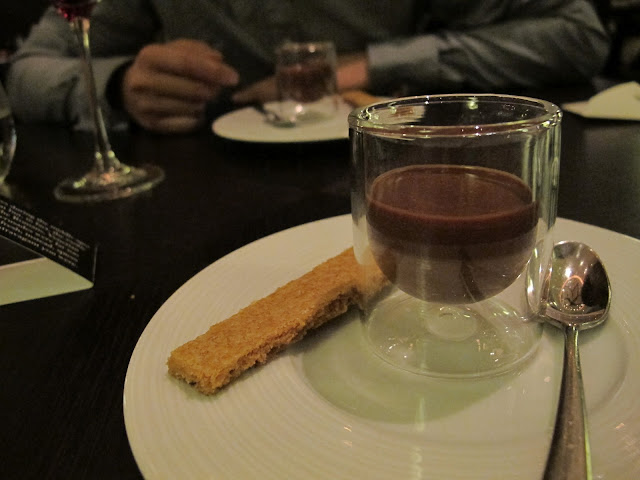 You know when you really like something / someone, you can justify their imperfections and have incredibly high tolerance? I find myself doing that so often recently. So I might as well apply the same logic here. There were a couple of things that fell slightly below my expectations at Dinner by Heston Blumenthal, but then again given how high I’d held my hopes, some misses were inevitable; most of the dishes lived up to it. This was a stunning meal, just enough elements of surprise to make it extraordinary, but not an overdrive into a gimmick-led idea.

You may also like: Launceston Place, Pollen Street Social, Artisan
at 00:19