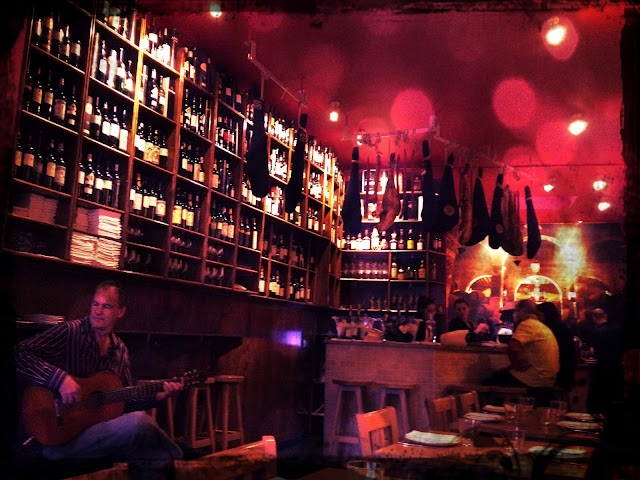 I had been procrastinating this post, not because the meal wasn’t wonderful, just that evening was so insulting I had been trying to erase it from my memory. But that’s not really fair to the tapas I was fed here.
So Capote y Toros, the third of the Cambio de Tercio series. And it just gets better, and smaller. Less than 10 tables and a few seats at the bar, we were snuggled between some Spanish ex-pats against the backdrop of live Spanish folk music.
Believe it or not, I've never had sherry. Isn't it more perceived as a drink for folks in their late-50s? Nonetheless I do as I was recommended - we ditched our selected few favourite Spanish reds and trusted the highly recommended pairing of sherries and jamon. We had a glass of Isabela and Iberia cream each... 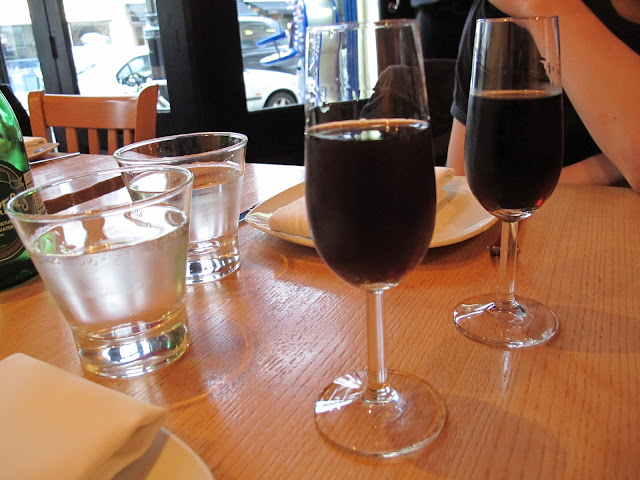 And I definitely don’t like sherry. The scent reminded me of Chinese medicinal alcohol, ones that ‘therapists’ apply externally to massage off bruises and muscle pains. I absolutely adore that smell, memories of my Grandpa flooded back... but not for drinking! The first drop met my lips was dry and pungent, whiskey-type pungent, then it was overcame by a sudden gush of strong syrup, which came and went to leave a long trail of brandy fragrance. Just not my kind of thing.
Paletilla Iberico Ham (front leg) 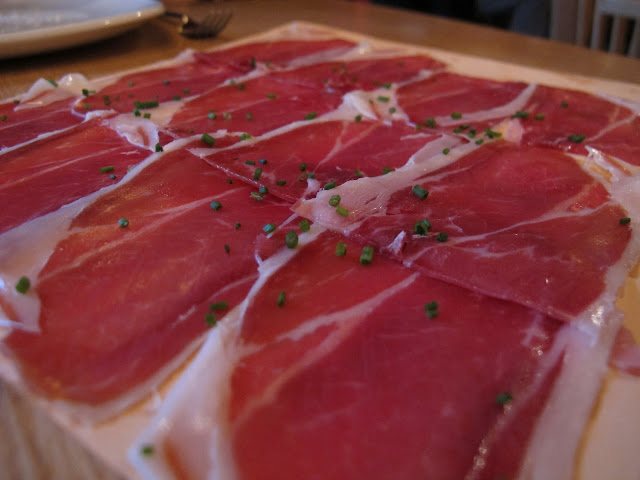 Thought we'd be adventurous and try something other than the usual 5J Pata Negra ham, acorn fed Iberico. And boy I should have stayed on familiar grounds.


These were much leaner and so tougher in texture; they also lack the distinctive nuttiness that comes from the streak of lard. The delicate flavours were shadowed by its saltiness, but a sip of sherry does all kinds of wonders to the flavours; it toned down the heady salt and amplified the subtle meaty flavours, adding sophistication and roundness. 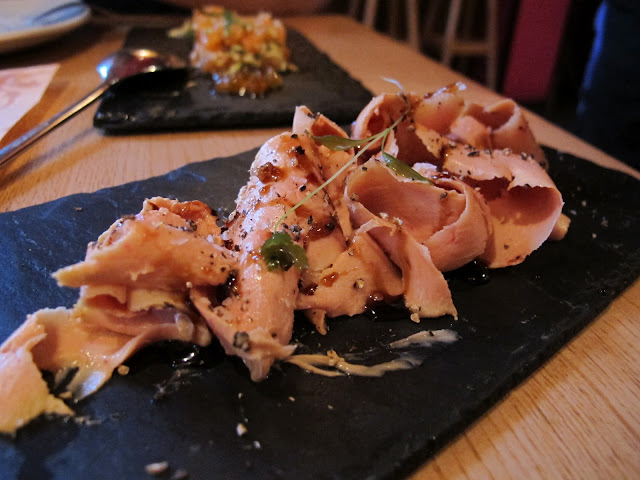 This was ingenious; it’s a savoury ice cream. The thin slices literally melted the second they hit the tongue, then wait for it... within seconds the essence and ultimate richness of duck liver diffuse and spread around all senses, so much so each exhaled breath was accentuated with the thick aroma. The reduction of PX brought the sweet element to lighten the finish; making this a deconstructed version of the classic foie gras with plum port sauce. 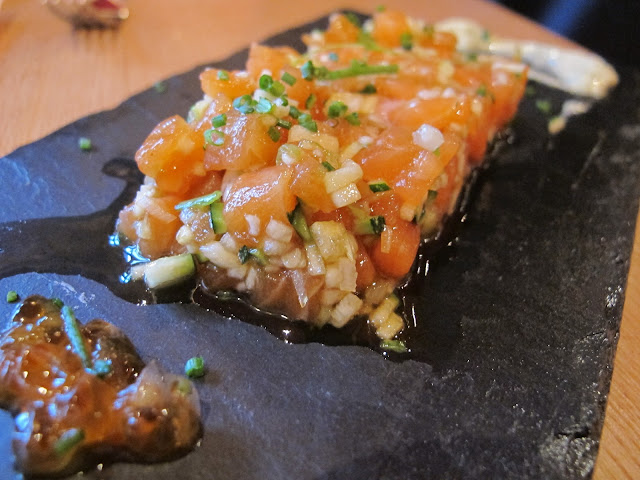 Diced salmon mixed with spring onions was rich with oils, bouncy and crunchy in texture, but relatively mild in flavours considering salmon is supposed to be a strong fish. The little balls of ikura on the side made up for the flavours with powerful pops of fishy oils, my all-time favourite. Without the salmon caviar, however, this was somewhat forgettable. 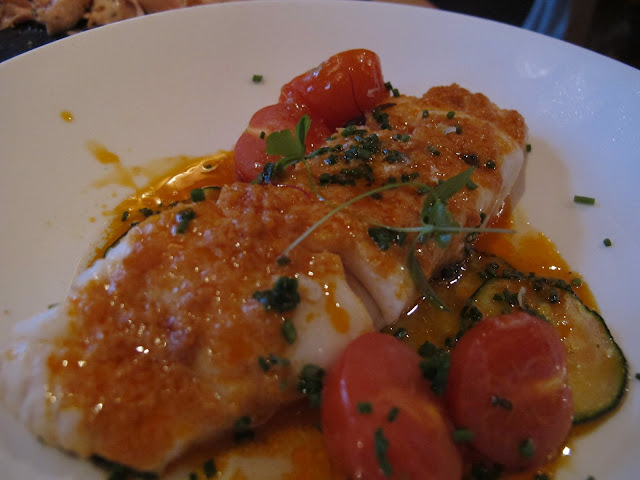 This was well-cooked, the fish collapsed and crumbled into small flakes with minimum pressing from the spoon, but something wasn't quite right about it. The cod was soft to the point of mushiness; it had lost its smoothness and simply reduced to mushy and almost grainy textures. It wasn't disastrous, just not the roast fish I was expecting. The sauce was beautiful, sharp with an undertone was natural tomato sweetness, perfect for the summer. 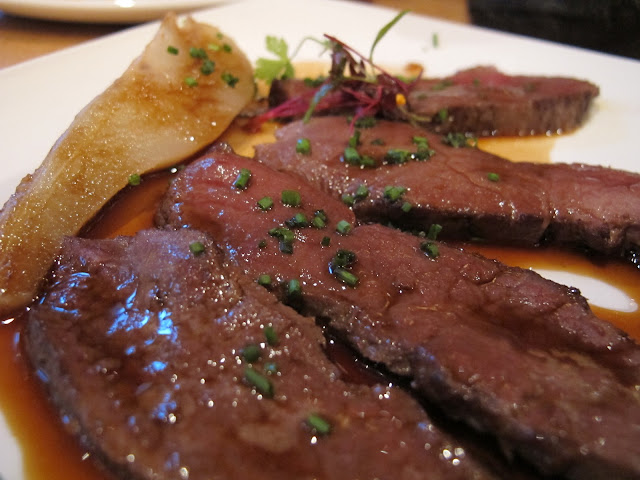 Undoubtedly the weakest of the evening. First of all it was visually boring, four thin strips of brown meat bathing in meat jus. And then they were overcooked too, to the point they resembled liver or overcooked duck breast, coarse and chewy. 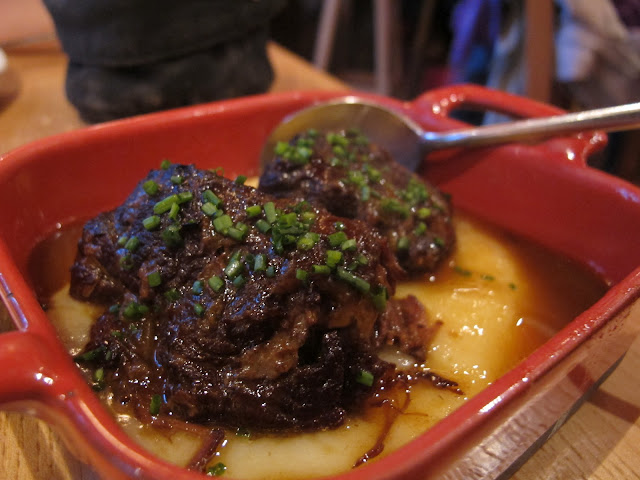 Slow-cooked cheeks are great, they have the meaty flavours locked inside leaner muscles, as well as the wobbly, glutinous cartilage that gives the liquifying tenderness. These were exactly how cheeks should be done, just to the point before the muscles disintegrate into shreds.
And the potato cream was aptly named, slightly thicker than soup, but too runny to be mash, delish.
As usual for the Cambio de Tercio Group, there was little doubt about the quality of food and innovations in recipes. And with creativity comes risk, so not everything was suited for everyone’s taste. For me, I have to come back, purely because I don’t know where to find another duck liver carpaccio. But on my next visit, I’ll learn to stick to the Spanish reds, the usual 5J bellota jamon and skip the venison. And if, just if, they could slip the baby eels from Tendido Cero across the road...
Capote & Toros
157 Old Brompton Old
London
SW5 0LJ
Tel: 0207 373 0567