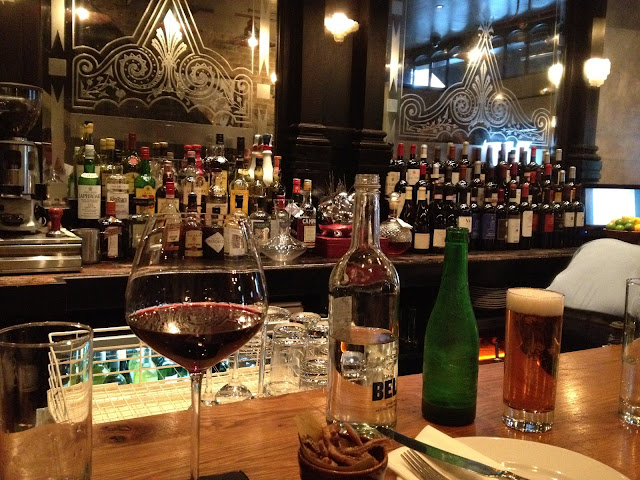 To cheer up our non-existent summer mid-week, I booked for the Hurly Burly Show; a bit of semi-burlesque, more fun than sexy kind of entertainment. And Opera Tavern is so handily located next to the theatre. I had an interest in this tapas bar a while back when it first opened, but then I was almost going through a Spanish restaurant per week.


Opera Tavern looked like a pub at first glance, must have been the dim lights, mirrors at the bar and general crowdedness. Upon a closer look, the ground floor is slick; bronze sculptures of black pig foot on the door handle and the bronze pig leg draught handle. We were seated at bar where the staff were churning glass after glass of sexy looking cocktails. 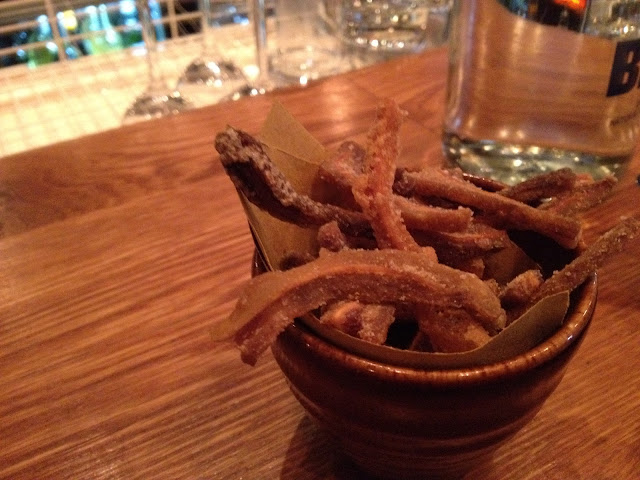 The Chinese slow cook pigs ears in dark soy marinade until the bones and cartilage soften to a crunchy brittleness with a glutinous layer. This crispy version was distinctively different; more hard than brittle, but nothing teeth-chipping. Like all savoury deep-fried snacks, addictive and great to nibble with drinks. Just think it might be even better had it been slow-cooked first before deep-frying... 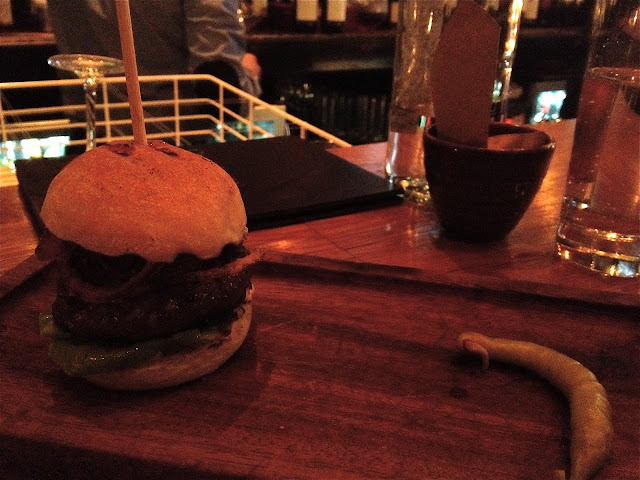 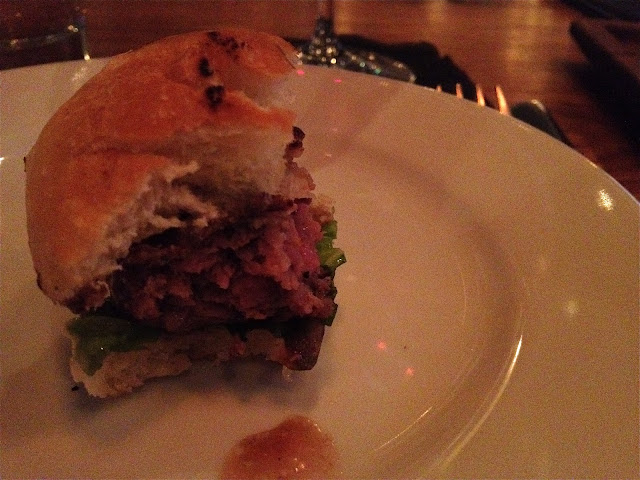 The signature dish I heard. I haven’t been much of a slider fan, probably because it’s too much of a teaser; what good does a lip-smacking burger do when it only lasts 2 bites? And this slider was exactly like that. The ball of pork patty was highly addictive; crispy and ultra smoky on the outside, medium-cooked with a creamy, juicy centre; the nutty, meaty flavours were explosive.

Foie gras was probably too subtle and too little to be detected, but it genuinely didn’t matter. The fried onions and smoky pork ball was already a winning combination. 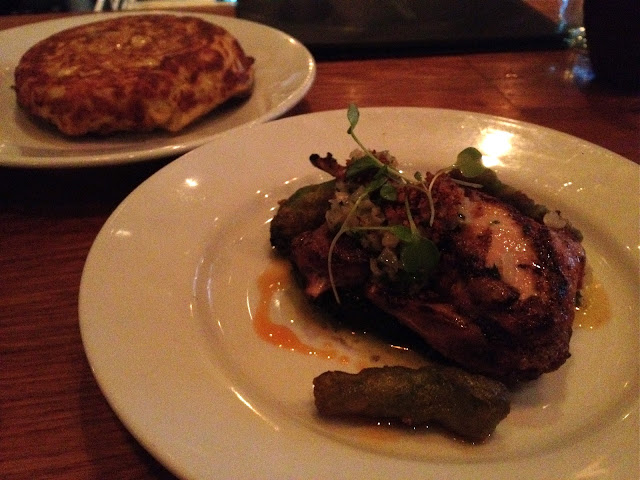 For such a small bird, there was quite a bit of meat. There was no doubt about the quail; gently charred skin with spring-chicken-thigh-like muscles. It was the first time I had the pairing of quail and squid, they worked quite well together, equally delicate but holding strongly onto their characteristics. The silky squid deep-fried in the thin batter almost felt like an imitation of the bird.


The ink mash was pleasantly amusing, I was half expecting sesame paste just by looking at the shining paste. 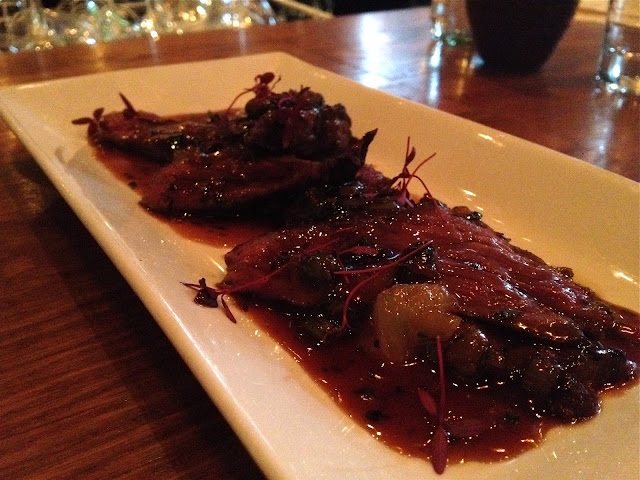 Presa is the cut attached to the shoulder at the head of the loin, with good marbling on a high quality piece of meat. This was slow cooked to baby food tenderness, oozing with pork juices and diffused away in mouth to meaty essence. The sauce was rich, perhaps too rich it was at the risk of masking the true flavours of such gorgeous pork. I wouldn’t go as far as saying the sauce ruined it, but perhaps something lighter would have been even better. 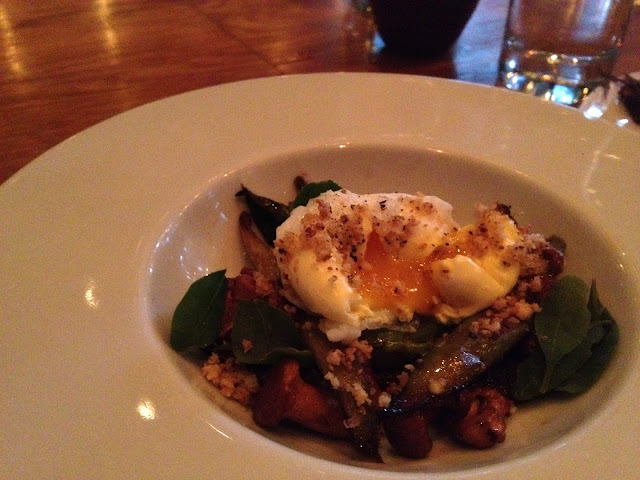 Our waiter gave us the thumbs-up when we ordered this, because it was apparently the last day of the asparagus season.

Hmm... it’s still asparagus. I’m not sure about this one, I like everything on the plate, yet they didn’t quite gel together. Maybe it was the balsamic, perhaps a slightly sweeter reduction would be softer on my palate... I don’t know. It didn’t tick all my boxes. 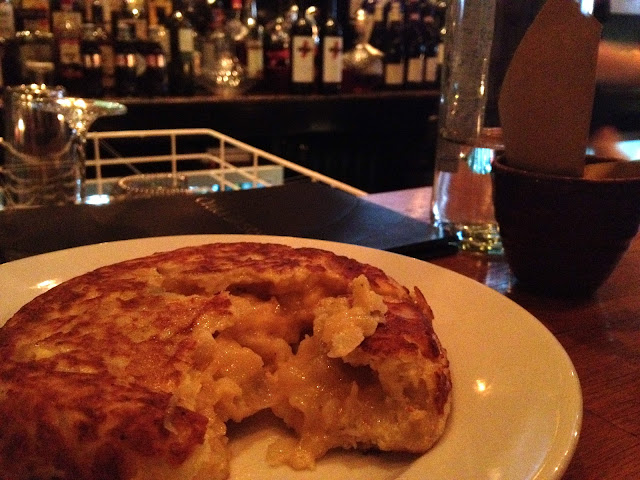 LondonEater took some evil photos at Donostia, one of which was a tortilla with egg yolk leaking out of the pile of shredded potatoes, neatly wrapped in the omelette. I knew I wasn’t going to get that here, but still I couldn’t resist the urge.

And Opera Tavern’s version didn’t disappoint. Perhaps not pouring with yolk, but the tortilla had a gooey, custardy centre, rich in eggy flavours. Can’t complain.

I enjoyed Opera Tavern; the food had a touch of sophistication without being snobby. The recipes were modern, but nothing overly complicated. I think this goes half way between Tendido Cero and Jose; it didn't have the daring passion of the former, but nowhere as pure and simple as the latter. Opera Tavern was cooly sexy.

The Hurly Burly Show was a good laugh; some hilarious dances, not so much grace or artistic, just light burlesque, heavily comical.


You may also like: Capote y Toros, Ceviche, MEATmarket