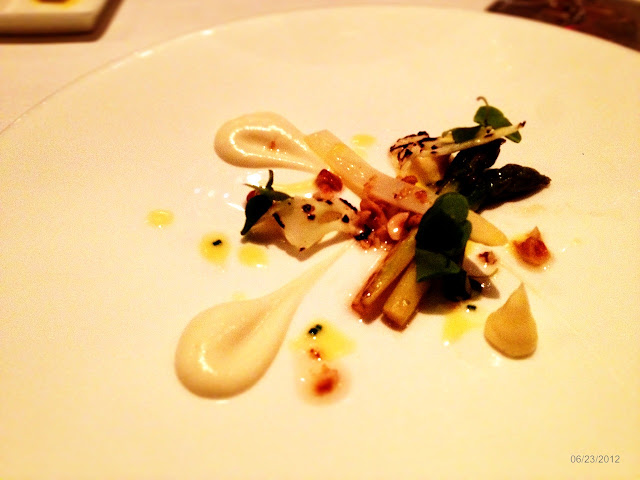 Rhodes never caught my attention, because “British cuisine with a French influence” reads “not good enough to be French, but I’m trying” to me. There are people you don’t warm to. But given my last Michelin entry was Dinner by Heston, and I feel like putting a dress on, Rhodes W1 was readily available on a Saturday night.

It didn’t feel too glamorous at the Great Cumberland hotel, but the restaurant hidden inside the Brasserie was much more like it with chandeliers and antique French furniture. We went for the tasting menu, a glass of young Morgon and an older recommendation from Saint Emilion by the Sommelier. 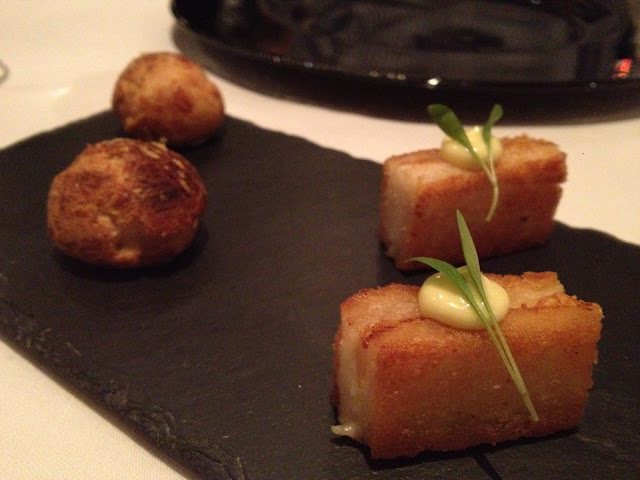 The small puff balls were pumped full with gooey warm melted cheese that bursted like lava in mouth. The toast-bites were made up of succulent smoked fish with an ultra crispy shell. These teasers resembled the 2-min action scenes in a James Bond movie, the ones that often end with an explosion before Bond coolly walks into a swanky hotel unscathed, followed by the title; we knew we’re in a good ride. 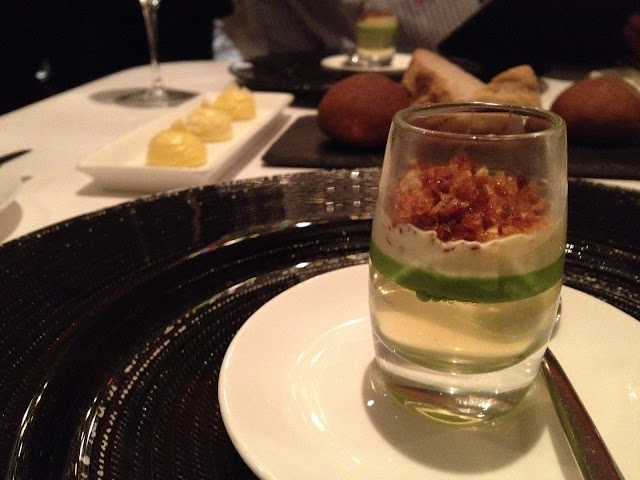 It was the deconstruction of the ordinary BLT: tomato jelly, lettuce foam and avocado mousse with bacon confetti. Refreshing. 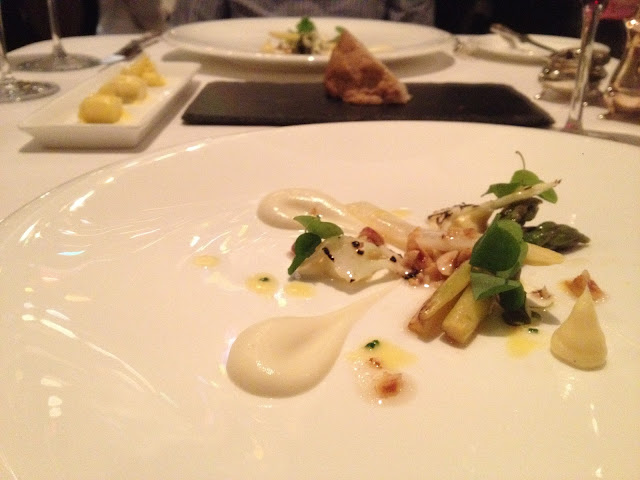 Presentation was stunning and that was the forte of the dish. The plate was busy with a drop of this, a dollop of that and a drizzle of another, but bottom line it was two sticks of asparagus tips and half a white asparagus. It was nice, especially with the extra fragrance from the toasted nuts, just nothing ground-breaking. 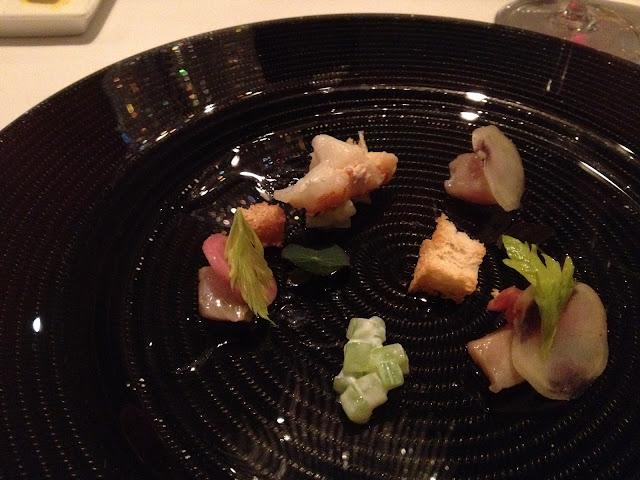 I know there isn’t much on the plate, but the flavours were powerful in these small pebbles. The cube of crab meat was fresh with sweet juices, with an added coolness from the diced celery.

Needless to say I’m a massive fan of mackerel. This reminded me of the luscious mackerel tartare lunch I had at Sketch, which I thought had more finesse in this dish with the contribution of shellfish bisque. Rhodes’s version was nonetheless very enjoyable, just perhaps less memorable.

The naked crouton felt out of place, too. 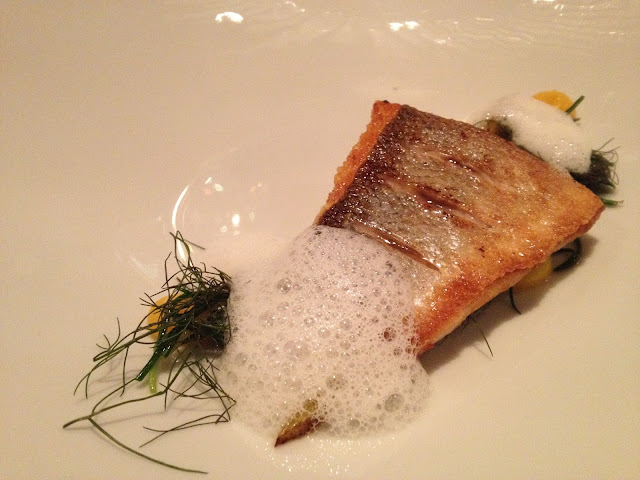 This must be, I don’t know, the eighth post that I say I don’t like bass? Isn’t it odd how a fish I dislike so much keeps coming up on things that I have eaten? How about I just stop freaking ordering it? Can’t help it. It’s on every bloody tasting menu.

That said, it’s cooked to utmost perfection; slightly undercooked for that silky texture, retaining that rich layer of fish oil under the skin, coupled with wafer-like crispy skin. The bitter lemon blob seems to be the trend with white fish at the moment; I find it a bit of an overkill. 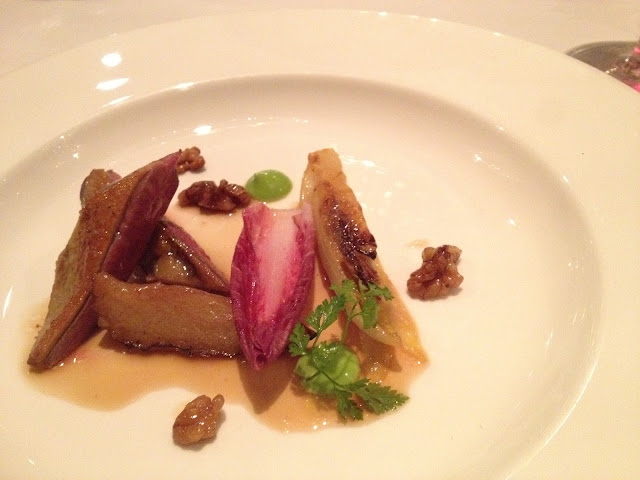 Ah at last, something meaty. I was so glad to see red meat I almost clapped. The two pieces of breast were fabulously raw, holding onto the metallic undertone of its bloodiness, balanced by the glazed sugary pear slices. 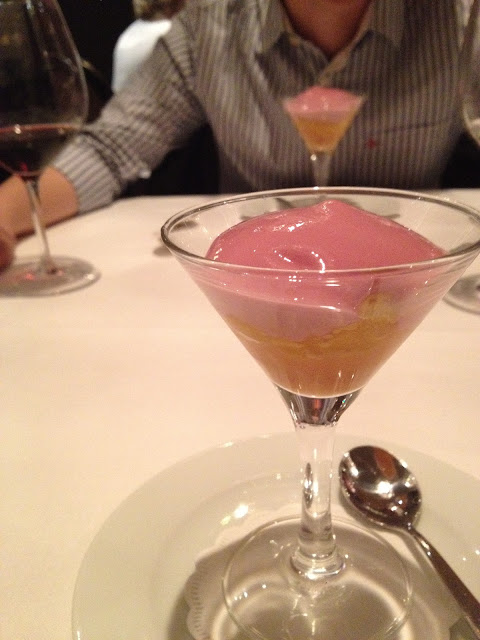 I was pretty full and was ready to give this unappetising and downright ugly mousse a miss. I can’t think of any natural foods that come in such colour, except for a massive melted bubble gum.


It didn’t taste as bad as it looked. It was essentially sangria mousse on orange ice; quite strong on alcohol. 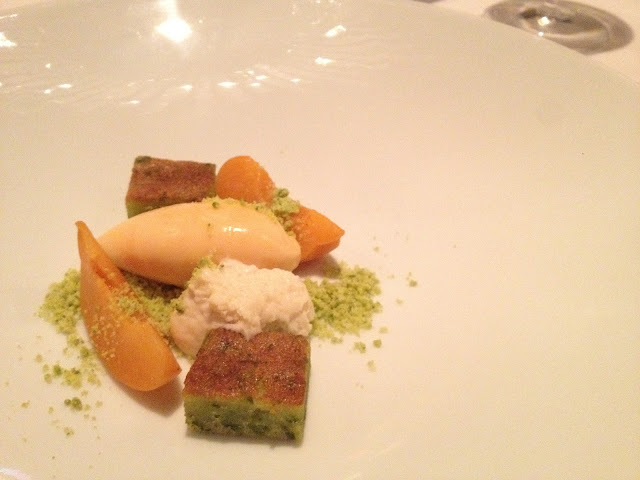 Much better than the Sangria, at least the colours of apricot and pistachio look better together. Sorry I don’t remember the white lump in the middle, but I do recall small pistachio slices being super buttery. I think I liked it. 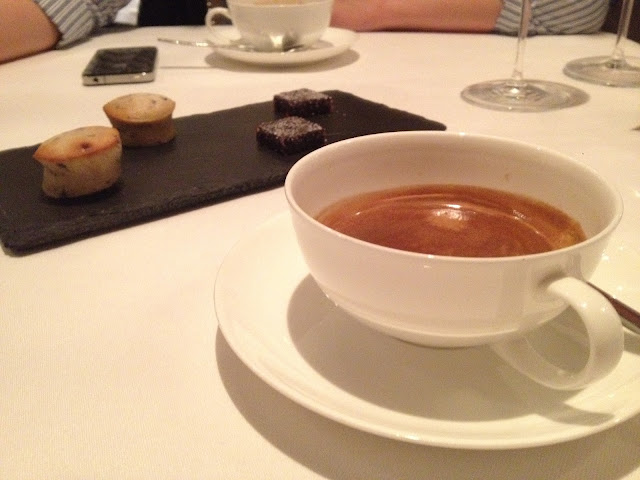 I think the meal was exactly like a Bond movie; great punchy, explosive start with the canapés and amuse, then it gets a bit chatty and quiet with the asparagus as Bond and M do a recap of the opening scene. The mackerel tartare is when the first bond girl comes on screen, followed by the second bond girl (bass), who is probably the more classic model-type girl. Then the meat of the film, where Bond screws up somewhere, finds out someone (usually the hotter girl) is betraying him. The apricot dessert is the bunch of shooting and punching at the grand finale, which is rarely memorable and usually repetitive.

Things were predictable; none of the recipes had much of a wow factor. Yet nothing went wrong, just like Agent 007 never dies in his films. But hey, I still watch the Bond series.