LIMA may not be my Cuppa 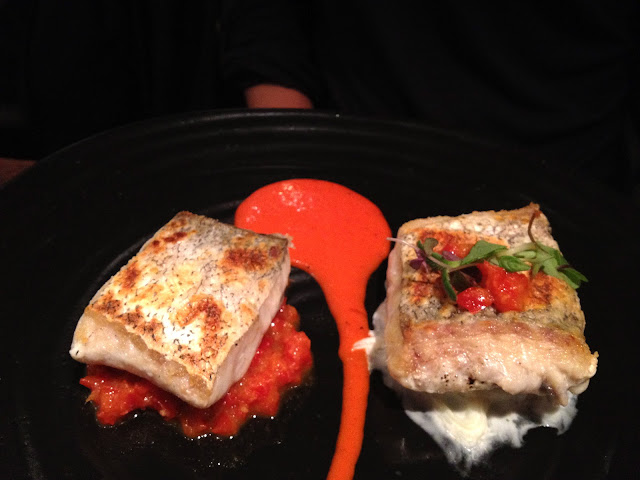 My first encounter with Peruvian cuisine was pleasant enough at Ceviche in Soho; I thought the flavours were fresh and different to the typical raw fish dishes I am accustomed to. So when Lima crept up in the Charlotte Street area, I promptly made a booking to avoid awkwardly perching at the bar.

I also gave the option of Duck & Waffle for Ana to choose from, she went for Lima because it happens to be her married name, and the chef shares the first name of his father-in-law; I guess it’s meant to be. Ms Torres, by the way, was glowing. Not the easiest place to find, I managed to walk pass it twice before spotting the tiny logo. We were seated at the back of the restaurant with high ceilings and two slanted mirrors to reflect natural lights from the glass roof. Comfortable, chic and stylish.

We settled for a glass of Sauvignon Blanc before our server elaborated every dish. The menu is fish dominated; list of 8+ starters that were either cooked or raw seafood, maybe a couple of vegetarian options. I think I’ll go all fish today. 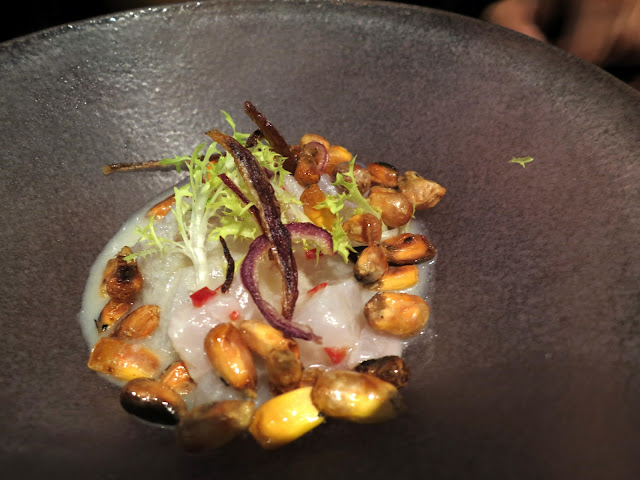 We both thought the roasted corn was unnecessary, hard and brittle, a bit similar to the roasted peanuts on the streets, but minus the sweetness; it was just very hard corn... 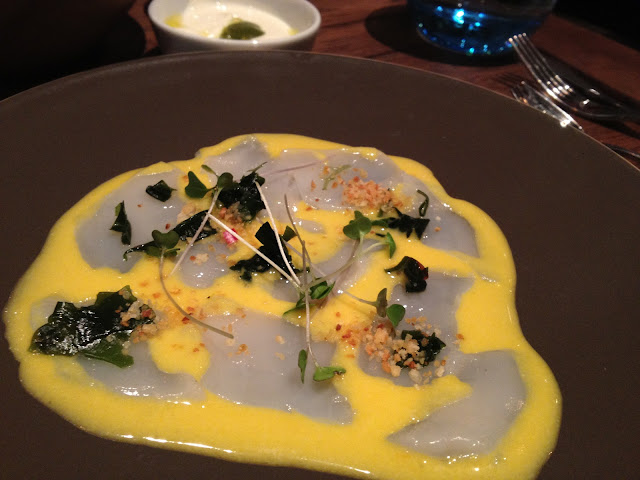 The vivid yellow was lively, but it was a no-winner in presentation. I get the contrast with yellow and grey for the visual impact, but thin slices of translucent scallop on this plate gave an unhealthy greyness to the raw shellfish, losing the glowing radiance of pearl-like flesh. I mean, this pool of watery yellow liquid with floating islands of grey... doesn't it remind you of something else one involuntarily churns out...?

That aside, it was quite a good recipe. The scallops were thinly sliced but just thick enough to experience the luscious creaminess before they dissolved away to leave sweet oceanic trails. The tiradito marinade was subtle and faintly tangy, not too overpowering to kill the delicate scallop sweetness, but not as exciting as the ceviche. 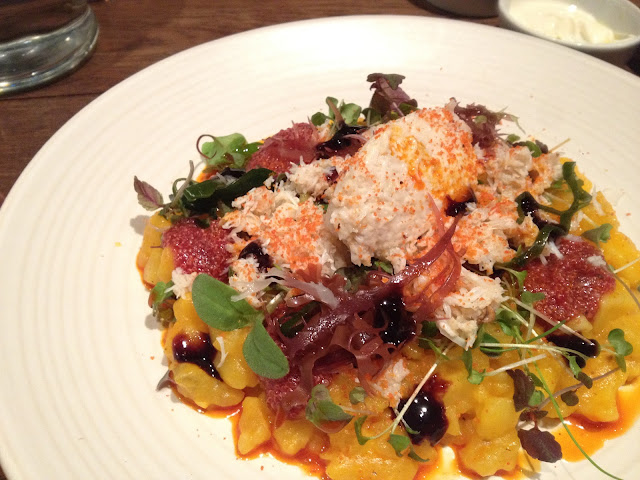 The vibrant fiesta theme continues onto the mains; this was colourfully chaotic. I was forewarned by our server that this is a very rich dish. I think what he meant was this was a substantial, filling dish.

The base of the harlequin mountain was laden with mango-coloured potato cubes. The textures were distinctively unique from the usual potatoes we have. It's velvety and sticky on the outside, almost yam-like, but crunchy in the centre, akin to cooked apples! I prefer grainy starchy baked potatoes, but these are definitely lighter.

Not much in terms of taste though, the crab roe, fluorescent oils and dollop of crab with mayo were bland. The only flavours came from stingy drops of caramelised balsamic vinegar, except for those six or seven forkfuls, it was merely cold mouthfuls of unrecognisable blandness. For £20, I was expecting fresh crab meat, this wasn't up to scratch. 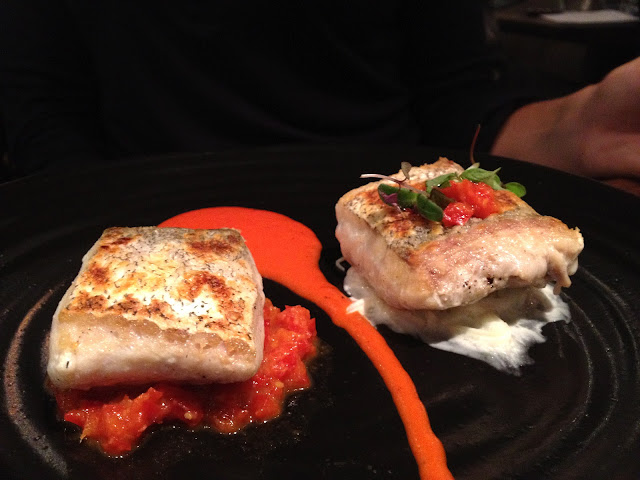 It’s a kind of hake, we were told. The fish was beautiful cooked, slightly under for that moist, flaky texture; crispy skin lubricated with healthy oils. It was, again, the flavours I couldn’t quite grasp. The bed of red compote on the left resembled salsa, while the white cream on the right was not dissimilar to aioli. I can’t say I was overly impressed. I appreciate simplicity, but this was more sloppiness and reluctance with the recipe. The halibut next door looked much better. 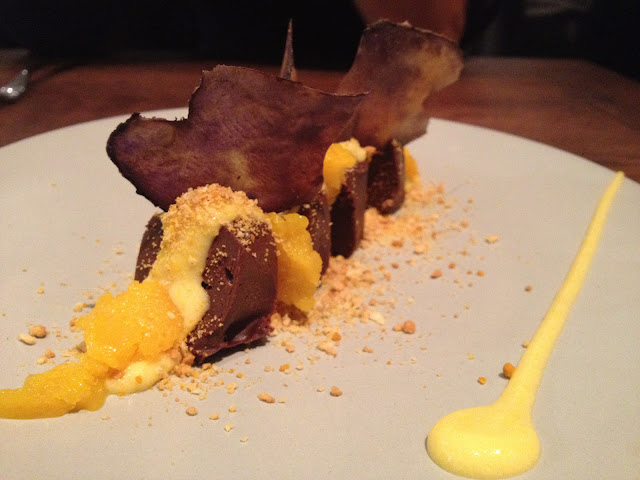 Ana, the Portugese that also speak fluent Spanish and possibly another five European languages, translated porcelana as porcelain. So I speculated a thin shell of dark chocolate encasing exotic mango puree with blue potato dustings... totally off the scale.

Porcelana turned out to be small blocks of chocolate delice, dense, smooth and slowly melting away on tongue like toffee. It didn’t feel like 75% cocoa though, probably a tad too sweet for my liking, I prefer something more bitter. The gentle fruity acidity lifted the solid sweetness of the choc, though the natural mango fragrance was somewhat lost. As for the blue potato... they might have turned brown as they warmed up.  I thought it was the best part of the meal.

I think I’m a bit weary of reading menus with too many odd words. I’m not even talking about Thai or Vietnamese menus, just words that are seemingly English. Take the Merluza for example, out of the four ingredients that make up the dish, I can’t accurately explain any of them, not one out of the four. I only guessed it was fish because it was sitting under the “mar” heading!

There were lots of cute light touches throughout the meal to give it an exotic twist, like blue potato cubes in the bread, roasted corn on ceviche, the green blob in the yoghurt that came with the bread... but none of them had much flavour, so they became food colourings. Did I grow fonder of Peruvian cuisine? I think I’m exactly where I was before I came to LIMA; found it interestingly different and fairly enjoyable, but I haven’t bought into it.