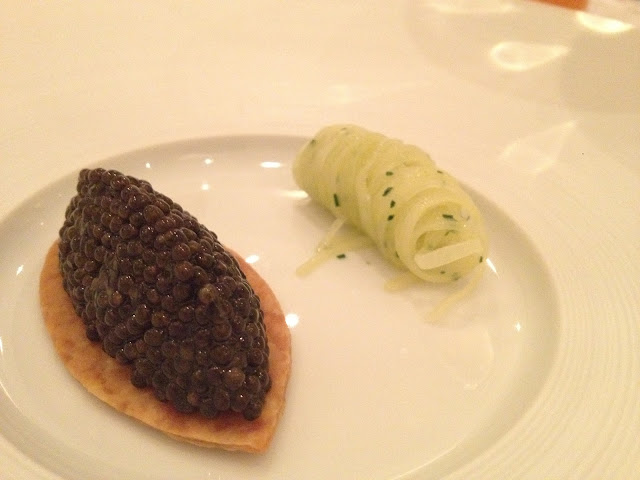 This Michelin 2-star restaurant is hidden in the Passage des Panoramas by Grands Boulevards, in the 2éme Arrondissement. The arcade is lined by various posh-looking restaurants, and the smell was mouth-watering.

It was easy to walk by Passage 53 without registering its existence. With the white curtains drawn, its exterior looked like a vacant shop space under refurbishment. As we pushed through the door to a room of silence with 4 occupied tables, I have to admit it was awkward. Things warmed up as the diners attended their reservations and conversations started flowing.

There was only the option of a blind tasting menu in the evening, so we were placed in the safe hands of a team of Japanese chefs, meticulously showing off their modern touch on French haute cuisine. I am going to refrain from too much commentary on each course, as there should always be an element of surprise in blind tasting menus of this calibre. Let me just say this outright, it was an exquisite meal. 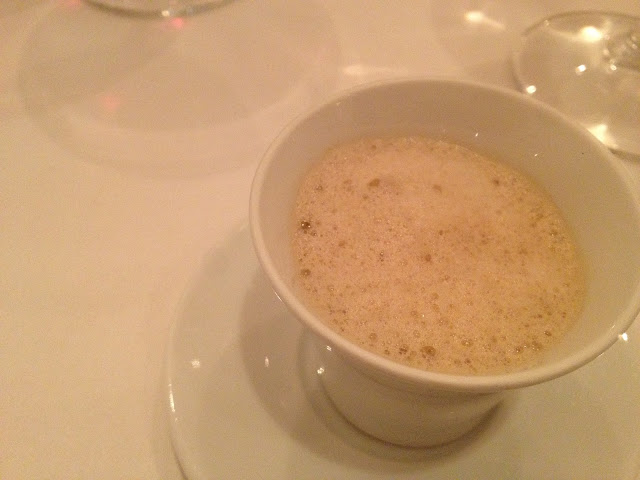 A daring combination of a rich pumpkin veloute topped with cafe au lait foam; the trail of coffee aroma was most intriguing with the ripe sweetness of pure pumpkin.

We were offered the option of an addition course of French Caviar. It was a generous portion of shiny precious black pearls on a freshly baked skin of waffle. The caviar was magnificent. Unlike the more extravagant (or extortionate) variations, these were less forceful, just pleasantly savoury. It felt like a smaller version of ikura with triple the umami and double the sweetness. Stunner. 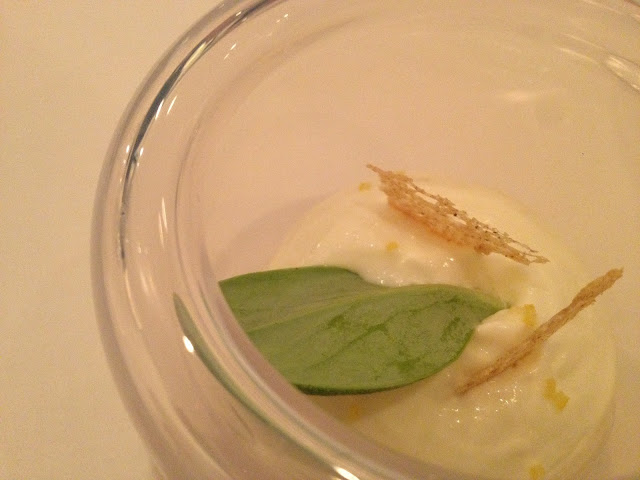 A plump oyster was hidden underneath his dollop of luscious smoked haddock cream and apple cubes - unbelievable mix of flavours in perfect harmony. 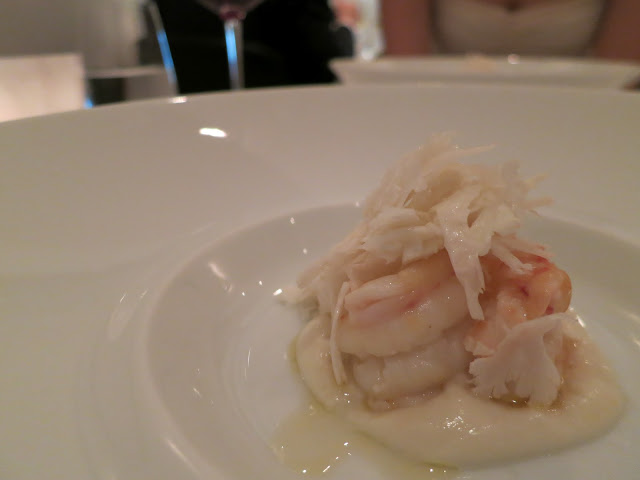 Langoustine with cauliflower puree and raw cauliflower shavings. The tenderness of the langoustine was beyond words, the texture was totally unfamiliar yet so addictive. It was work of utmost precision and delicate balance. 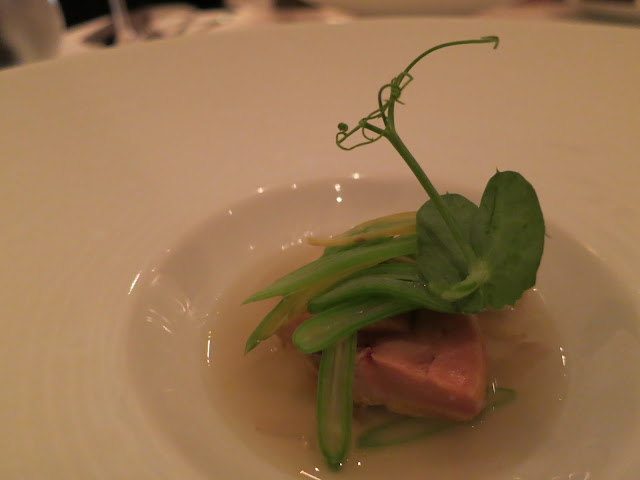 Foie gras in clam broth topped with asparagus and pea shoot shavings. The combination was as unlikely as pig trotters and peanut butter, yet the cleanness of the broth was super complimentary to the richness of the small piece of liver. The pea shoot was incredibly sweet and brought every ingredient together.


Miss Cynthia doesn’t eat foie gras (what?! Yea I heard you; I thought she was joking too) She had to send it back. Unfortunately chef couldn’t offer an alternative, but did promise to pump up another course to make sure she leaves with a full stomach. 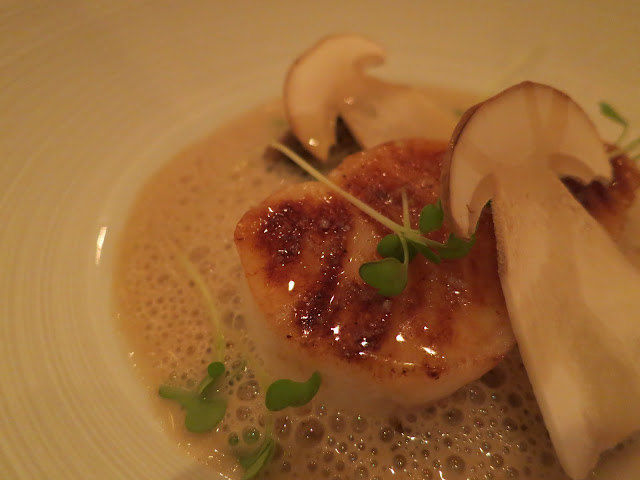 Caramelised cod in fungi foam and ceps shavings – It was a stunning fish lost in a tsunami of mushroom foam, the fragrance was supported by subtle walnut chippings. Miss Cynthia did suggest using black cod instead, to make this super silky fish fillet ultra silky. I thought it was already as good as it gets as-is. 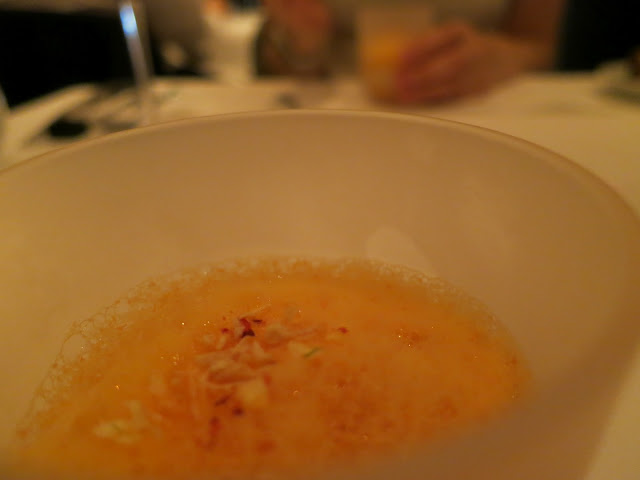 To get our palate ready for the meat courses: carrot veloute with chorizo cubes with soft boiled egg. The egg was indescribable; imagine the softest, most fragile onsen egg, but even softer and more fragile. 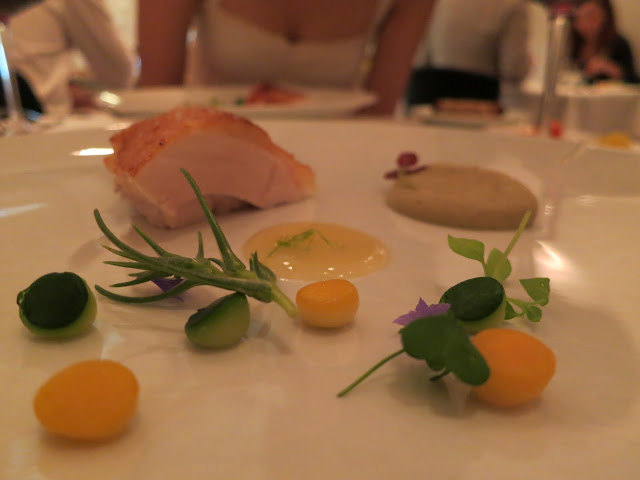 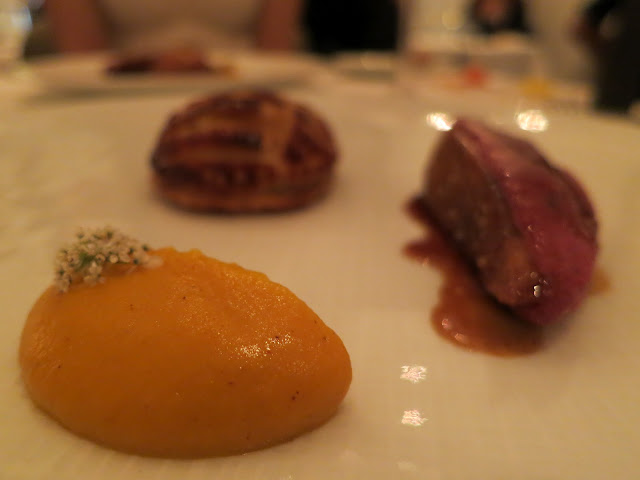 Roast pigeon, mini game pie, carrot and almond milk – The carrot & almond milk mash was unique, and added a roundness to the rare pigeon. A clever twist to a typical game dish.

9-13th Courses
We were then hit by 2 waves of mind-blowing desserts. 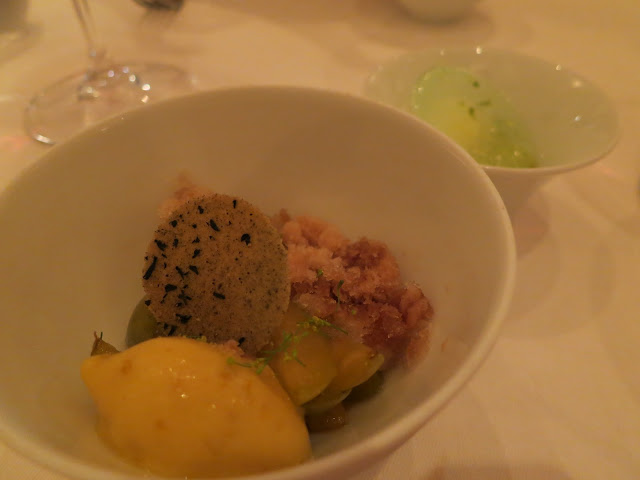 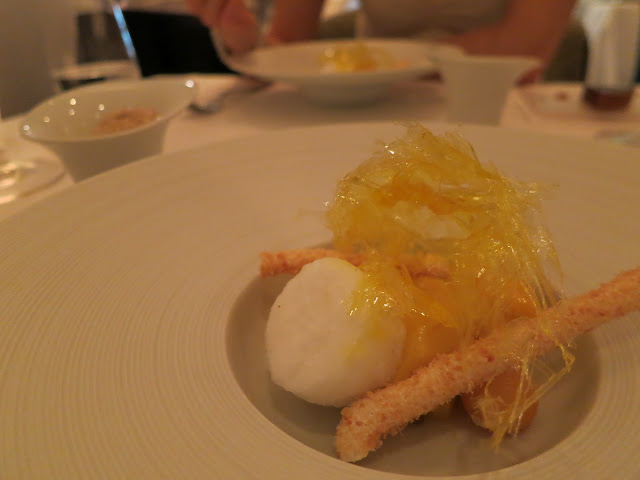 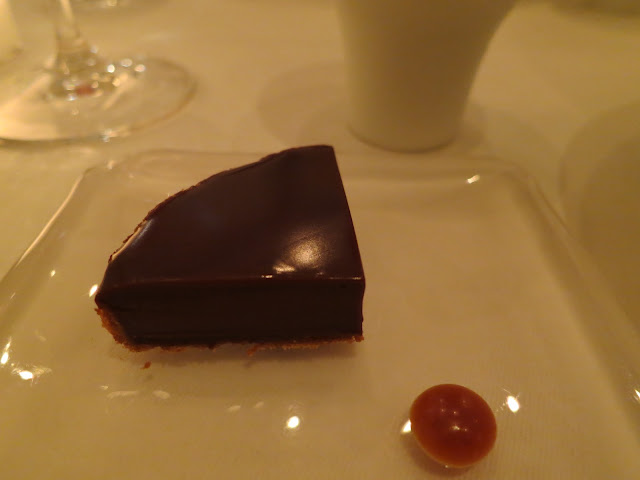 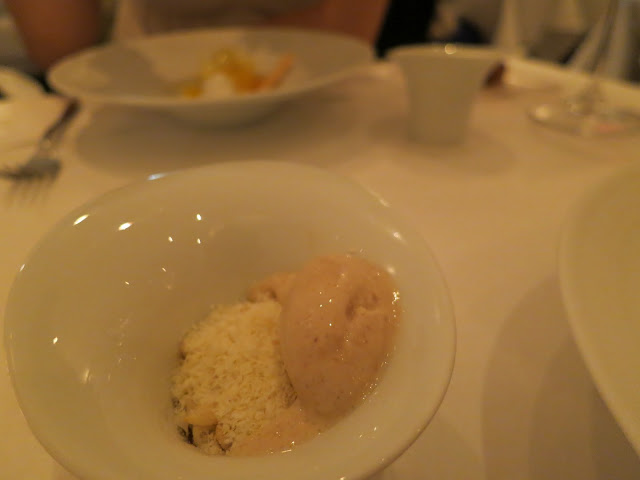 14th to finish off 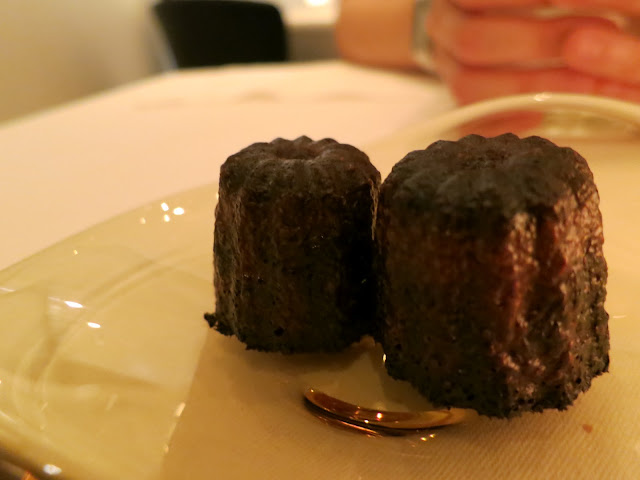 Typical French canelé with a soft wobbly custard centre and a caramelised crust. By now I was stuffed to the brim, and it could have been the most out-of-this-world recipe I wouldn’t notice. Or perhaps it wasn’t so special.

Bill came to 340 Euros for two, 120 for the menu, 3 glasses of wine at 18 each, caviar for 40 and water. Given the sheer quality of the menu, it was of outstanding value. The innovation in the recipes were evident, some daring pairings of ingredients but nothing too whacky, just calculated and thoroughly thought-through. Despite the full team of Japanese chefs in the kitchen, Asian touches were limited; what shone through was the dedication and precision of Japanese chefs, and how they challenged the conventional methods of cooking traditional French ingredients. The result, is astounding.