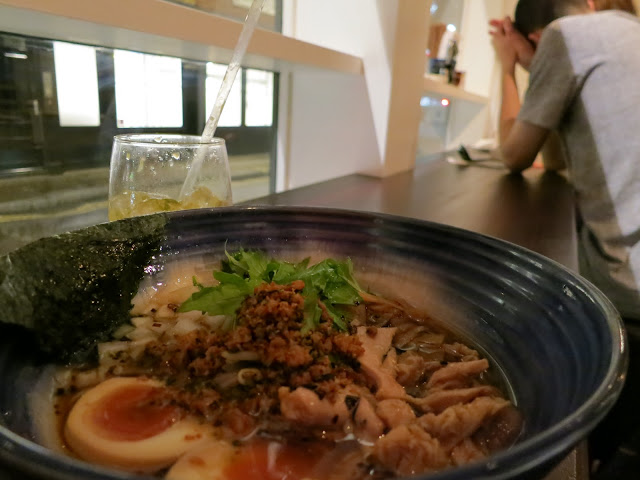 I was on a ramen quest a couple of months back, and decided Tonkotsu had most to offer in town at the mo. Bone Daddies joined the Soho ramen pack last month and immediately became talk of town. I held off until I saw Mr Noodle's photo of the improved milky tonkotsu soup.

It was almost empty on a weekday early evening, just a couple of people on each long bench. Looks like they have turned down the music, just soft rock playing in the background as I was led to the stools by the window. Menu was a 1-sheeter on a clipboard; I wanted everything on that sheet. 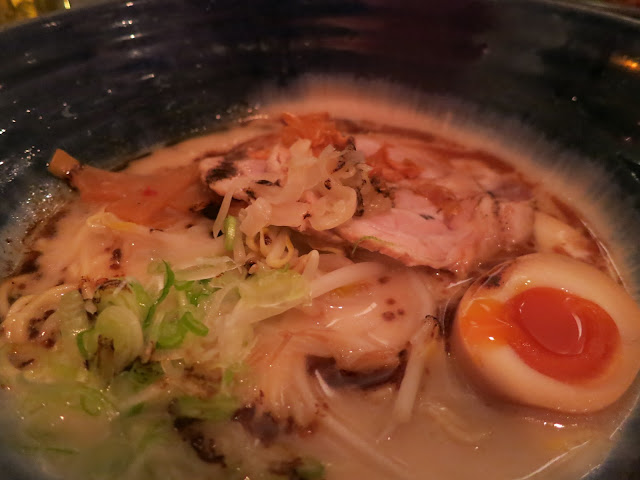 I thought I have seen other people's tonkotsu with a dropper stuck on it? Mine didn't. Check out the egg, a whole, marinated, honey-yolk egg. The consistency of this porky broth was the thickest I had seen; it was Bailey's kind of creamy, clinging onto the noodles with each slurp. So full marks on texture.

There was something missing in the flavours though, it was lacking the richness of all the pork bone goodness I was expecting with buttery soup. I was waiting for the powerful rush of meaty essence to hit my tastebuds, but it never came, as if there was a layer of gelatine that was holding back the full impact. Perhaps the soup was made up with a larger proportion of lard to achieve the texture? Does Bone Daddies need more bones and collagen? 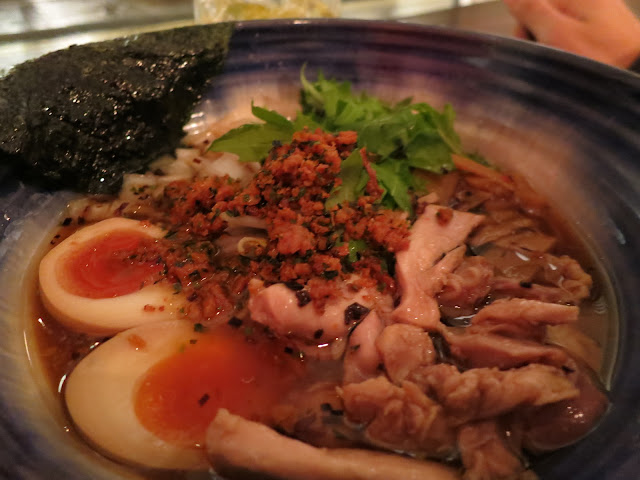 It was purely out of curiosity for cock scratchings that I have gone for T22, since soy-based ramen isn't my usual choice.

Cock scratchings were deep-fried chicken skin, just a small pile on top of the noodles, adding some edginess and crunch to the ramen. The chicken broth was packed with flavours. I think I tasted some bonito, or at least a bit of fish in it, and very slightly spicy too. I wish they would use the eggy noodles with this soup though, these white, thin, floury noodles weren't as good a match with soy-based broth. 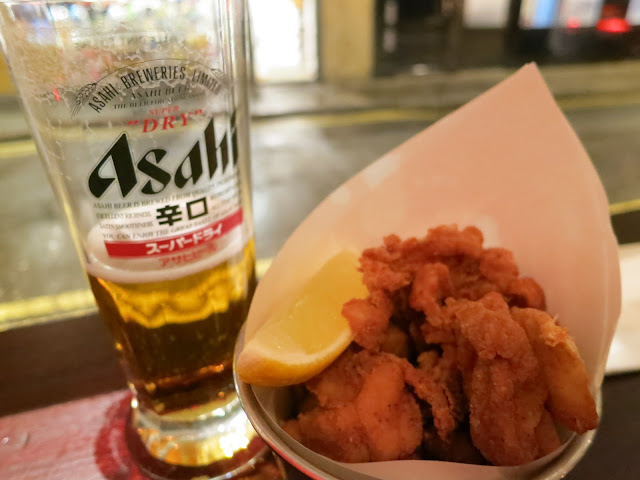 Thin layer of perfectly seasoned batter with blobs of tender chicken. Can't go wrong . These would have been great in the bowl of T22. The shreds of skinless chicken in T22 are uninteresting at the moment, these would have perfected it.

For comparison's sake, I ate at Tonkotsu a couple of days after my Bone Daddies trip. And I have to admit I preferred Tonkotsu where the soup base was a concentration of all the piggy bones. That said, Denice was a slower eater and her noodles soaked up the entire bowl of soup, which was almost solidifying - most unappetising. Not to mention the dumplings and prawn katsu failing miserably by any standards; they looked like shit and tasted worse.

I can't say Bone Daddies champed the London ramen scene yet. I think I need to give it another go; even as I was doing this write-up, I'm doubting if it was at all possible that such milky, velvety soup could be lacking in flavours. And that tantanmen looks too good to miss.

You may also like: Ittenbari, Nagomi, Sushi Tetsu
at 04:57