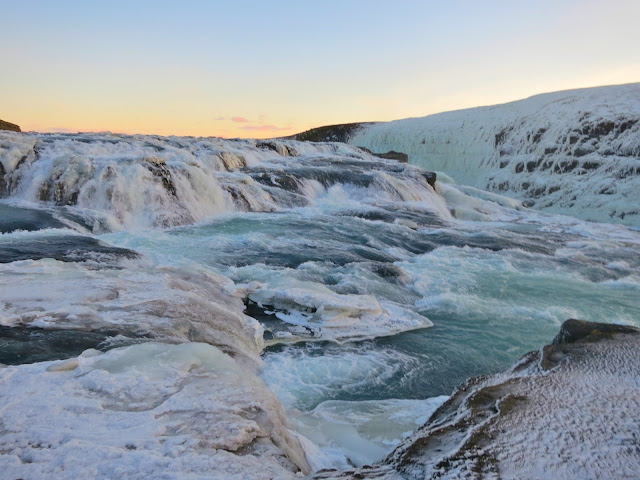 We arrived in mid-morning at a snowless airport and buses to Reykjavik were scheduled to leave 40mins after the each arrival. Knowing this country is a stronger believer of plastic money, I only changed £100 for the two of us as petty cash. Seriously, people use credit cards at hotdog stands here. After a 40-min coach ride - we were at downtown Reykjavik. 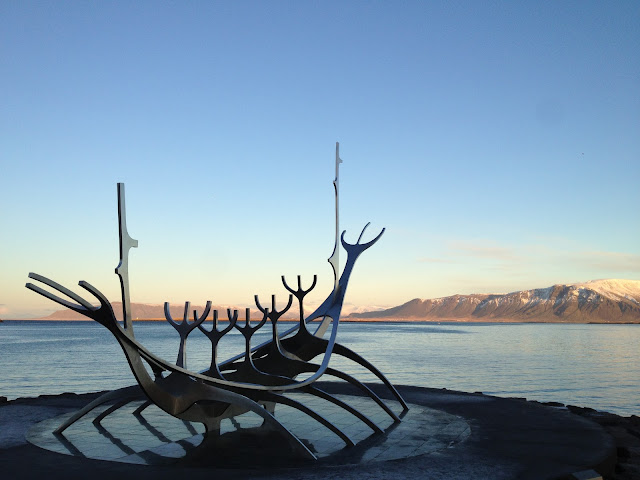 As usual we took the first day easy to browse around. Temperature was much milder than I expected, around 1-2 degrees, and daylight was much longer than Kiruna with a sunrise around 10:30 and sets by 3pm. We strolled down the busiest road at the old town area, Laugavegur, where the shops clustered and then headed to Hallgrimskirkja, the rocket-shaped church that could be seen from just about anywhere in the city. Come to think of it, I think it looks like a spouting geyser... 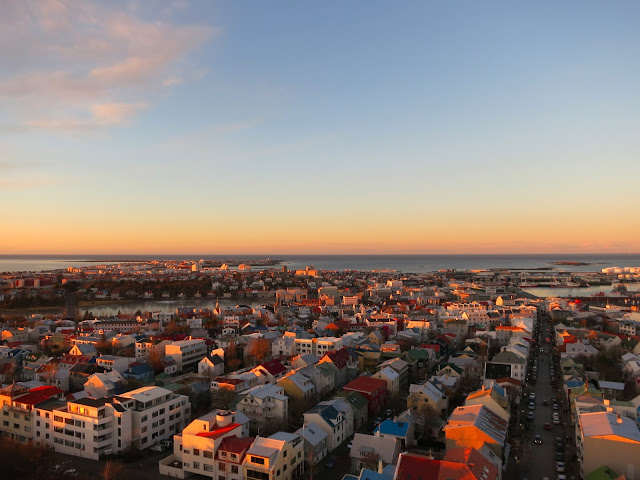 600ISK (c.£3) got us access to the top of tower with a view that overlooks the entire city, with the stunning sun setting behind the snow-capped mountains. 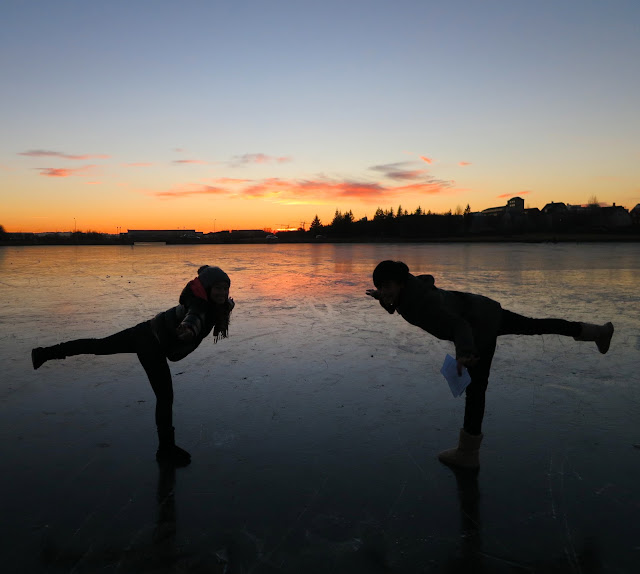 After a good swirl and glide on the frozen lake Tjornin, a stroll around the rather disappointing christmas market and a late afternoon nap, I was ready for dinner. I went for a platter of Icelandic delicacies to sample a bit of everything: dried fish, whale steak, grilled Icelandic lobster, fish stew, sweet rye bread and haggis. 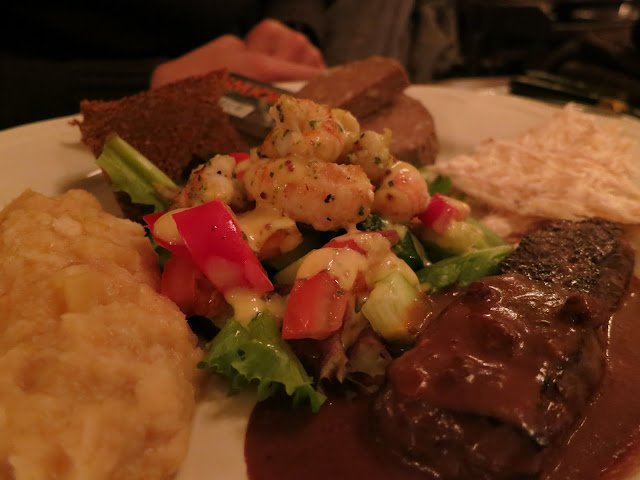 Fru Laugberg, seemingly local as a shopkeeper recommended it to us, did a pretty piss poor job with the food. What didn't have sauce on it was bland and knackered, what was smoothered in thick sauce was ultra-salty. But the whale steak, was interesting. I have never eaten whale before; turns out it's red meat. Unlike the fatty Japanese whale sashimi, the steak here was pure lean muscles and carried a super powerful gamey, metallic bloody taste. Hated the mushroom gravy here, but the actual meat I quite liked.

Then we hit the Golden Circle tour the following day. The Salty Tour operator was brilliant, the English-speaking driver / guide spoke throughout the entire 9-hour journey, from the Icelandic language, geography, geology to the patronymic naming system. 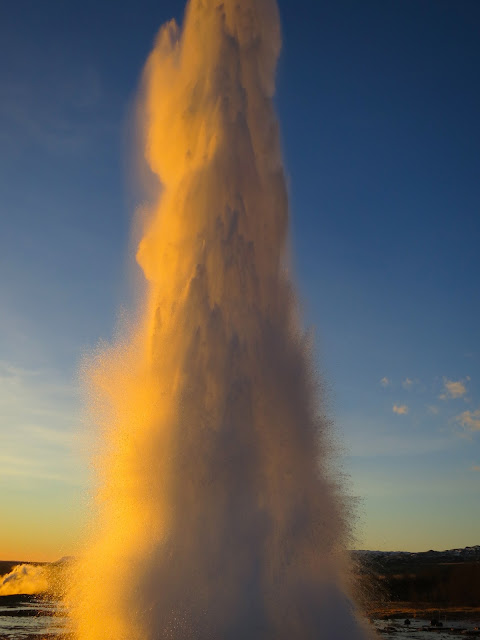 We made various stops: the Hverageroi greenhouse village as the sun peeks above the horizon, Kerio volcano crater where Bjork once held a floating concert, the magnificent Gulfoss, Geysir and Thingvellir National Park. Temperature dropped dramatically once we were outside Reykjavik, and together with the gushing Arctic winds, we were plunged into -15 near Gulfoss. 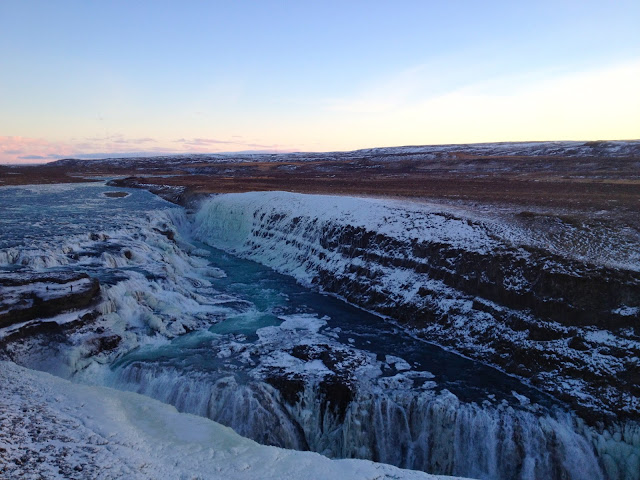 The evening was spent waiting for the Northern Lights. We thought we had everything on our side, a clear sky, strong neutrino activity and super strong lights from the night before. And we waited... for 6 hours we waited, in the bitter cold and face numbing wind we stood. Some pale hints as teasers we were told, but nothing to get us excited. It wasn't until we were driving our way back past midnight that the lights decided to show up:) 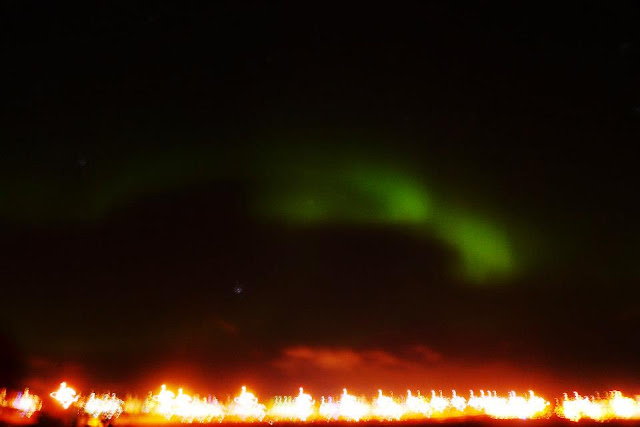 We snooped around for more local delicacies in town. This hot dog stand in the tiny carpark serves up some legendary hot dogs - its doesn't look much, regular supermarket looking sausage with regular looking sauce - I went for an "everything" and whoa it was a good dog.  It's the brown sauce and crispy onions that made the difference. I had seconds. 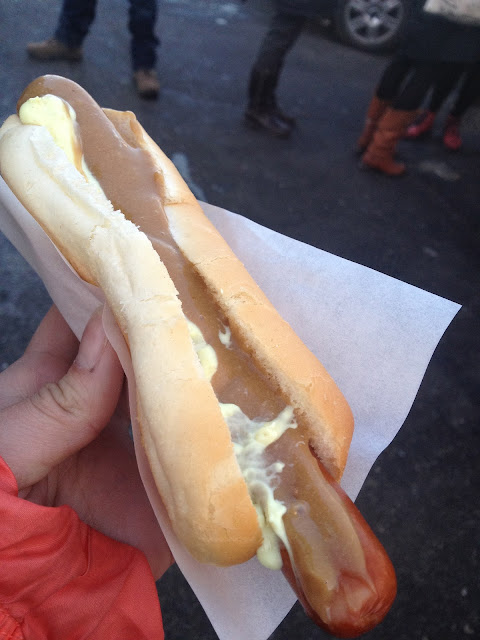 Skyr is a yoghurt-like diary product, Iceland speciality. We popped in a funky looking cafe called Laundromat for some hot choco and blueberry Skyrcake. 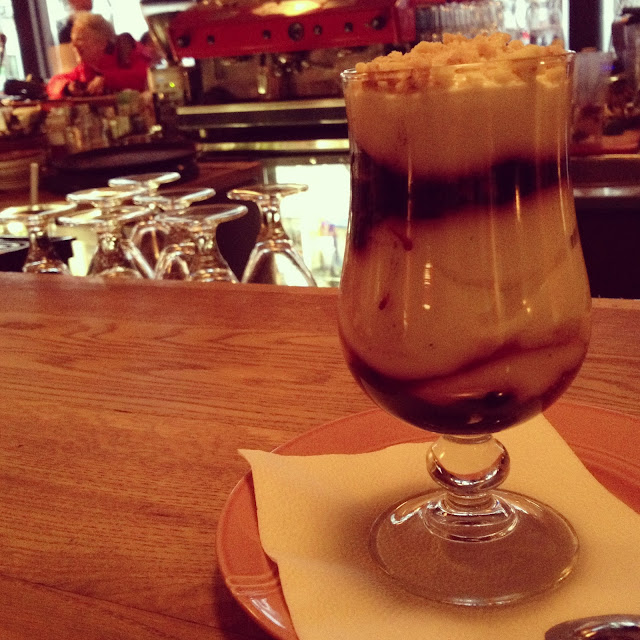 Then we took bus no. 11 to Seltjarnarnes, the western-most part of the city to watch the sun sink. Ended the leisurely day with a pleasant surprise at Sjavargrillid. 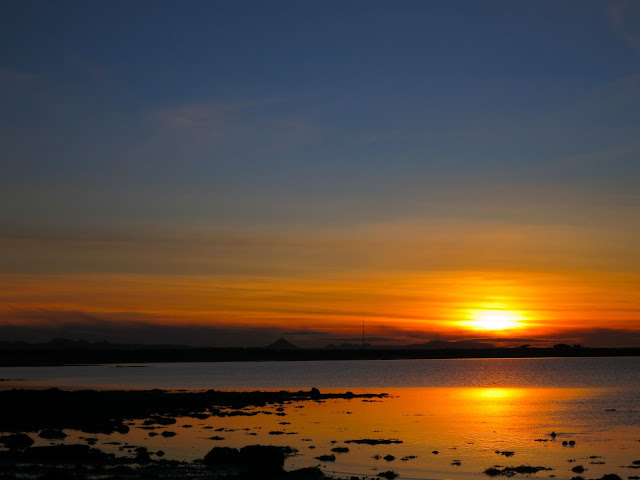 Blue lagoon was magical. Weather could have been better, but weather had been glorious in the last few days, so I couldn't ask for more. 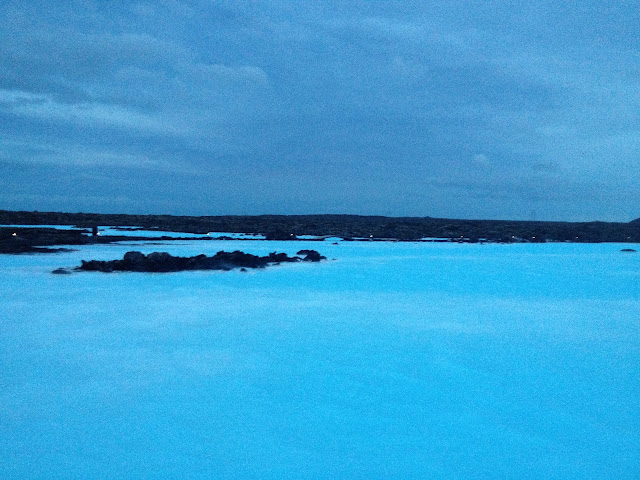 The trip was rounded off with a Christmas feast at the Perlan, also known as The Pearl, perched on a small hill that overlooks the entire city. It was one of the top 5 revolving restaurants in the world and it was serving up an extraordinary buffet of extravagant fare: caviar, whale carpaccio, various herring salads, flambee deer loin, grilled venison, roast pork smoked lamb... the selection was endless. Together with festive decorations, set in Harrods-like grandeur - what a finish to the most mind-blowing holiday. 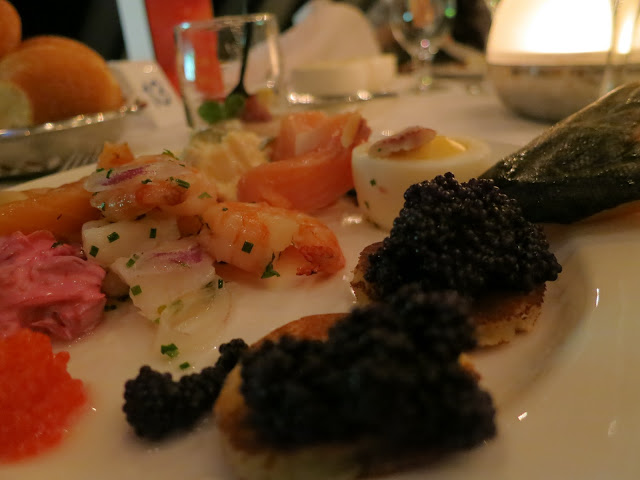 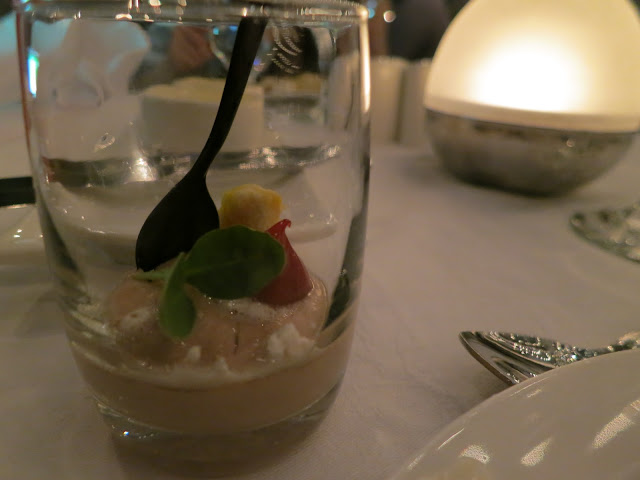