Brasserie Zedel - A touch of Paris in London 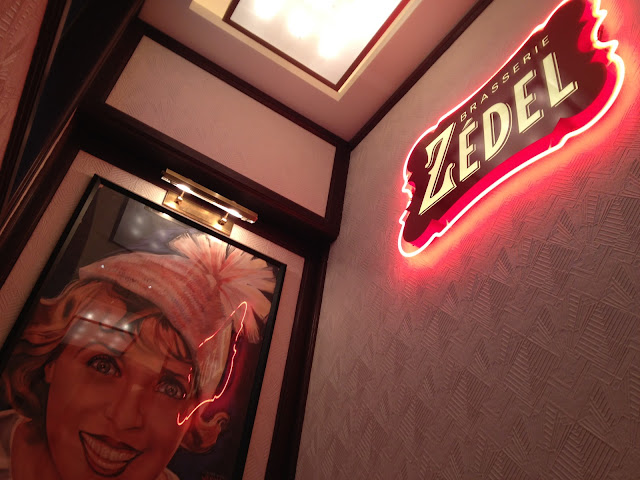 This place earned raving reviews the moment it hits the scene, mostly because it offers great value for money: above average standard in a specular setting bang in the middle of theatre land all for a more than reasonable price. I suspect it is also because it has been months since a new 'proper' restaurant was worth the attention. You know, we have been overwhelmed by hot dogs, burgers and ramen, when was the last time we talked about a regular menu?

The venue was impressive. Through the theatre doors, I was also transported back a few decades at the cafe, with the tiled floors and a neon sign pointing me downstairs for the restaurant. The sous-sol was colossal and felt nothing like a basement. Despite the chatter and clatters, there was still an air of elegance with the marble pillars and brass rails. I was choosing between the dish of the day, panache de poissons, and the onglet steak while munching on, frankly, stale baguettes. The Maitre d' said the onglet steak really does it for her. Okay then. 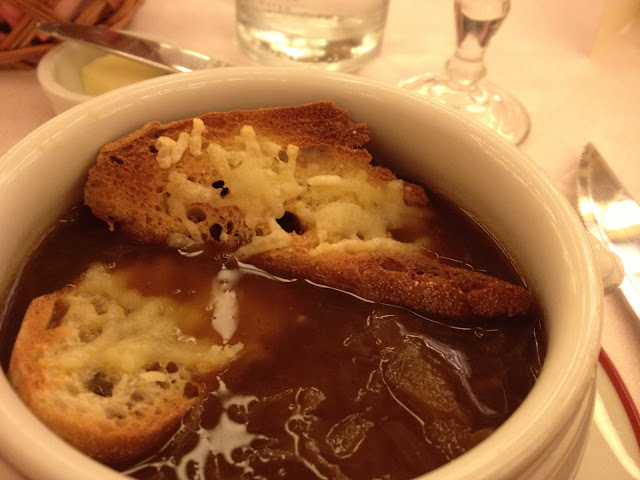 The cheese-topped toasts came on the side of the soup, but I prefer them soaked and softened, thickening the soup even more.

Let's not go OTT; It was a good soup, exactly how an onion soup should be, savoury, concentrated and warming. Everyone has a slightly different definition of an authentic onion soup, I can only say I liked this one but I have had better. 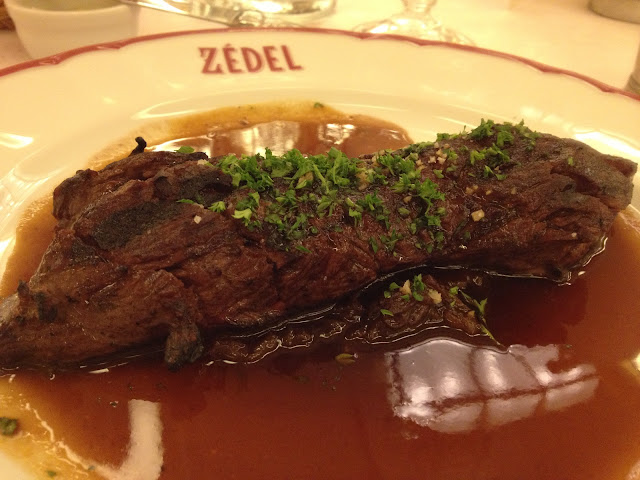 My last hanger steak was at 28-50, where our focus was more on the 7 wines we worked through and that was 4 months ago. Though a greasy, fatty rib-eye lover, I do sometimes forgo the soft melty mouthfeel for the sumptuous beefy flavours in leaner cuts.

And the waft of meaty fragrance hit me before the dish arrived. This long strip of meat, scored, still rare in the middle, was mouth-watering; juicy, bursting with bovine goodness and crazily tender, just a damn good piece of meat. The sauce was rich, quite heavily sweetened but worked its magic with the beautifully seasoned onglet. It's exactly what one would expect to be served in any old brasserie in the heart of Paris. 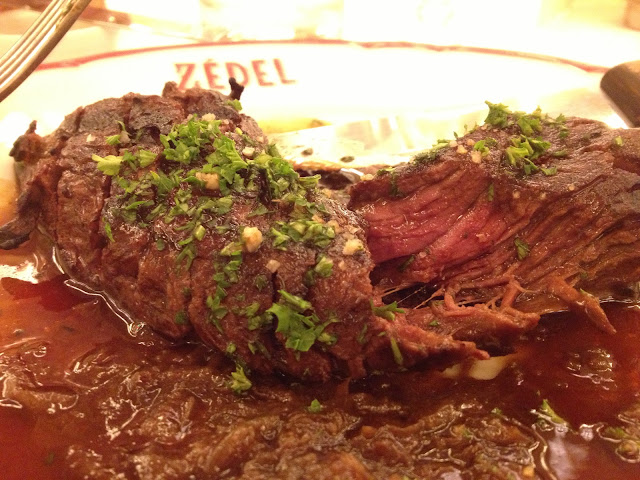 Now whether any old brasserie in the heart of Paris serves the best food is another topic for discussion. I certainly found my rarer jewels off the beaten path, but I'm not talking about an unforgettable dining experience here, it's classic, simple French fare that is ever so comforting. Like a good katsu curry for the Japs, a good beef ho-fun for the HK-ers, a good pho for the Viets, that touch of locality and authenticity that reminds you of a certain place. And yea, Zedel took me back to Paris.

I thought Zedel was ace. The food alone probably wasn't top class, it's onion soup and onglet & fries, how mind-blowing could it be? But put together the grand decor, fancy vibe and insane value for money, Zedel was pretty unbeatable. My onion soup went for £3.95, EAT demands £4.95 for its super large bowl and that's a sandwich shop for crying out loud. I found a little Paris in London.

You may also like: Arbutus, Galvin Bistrot de Luxe, Pierre Victoire
at 00:39