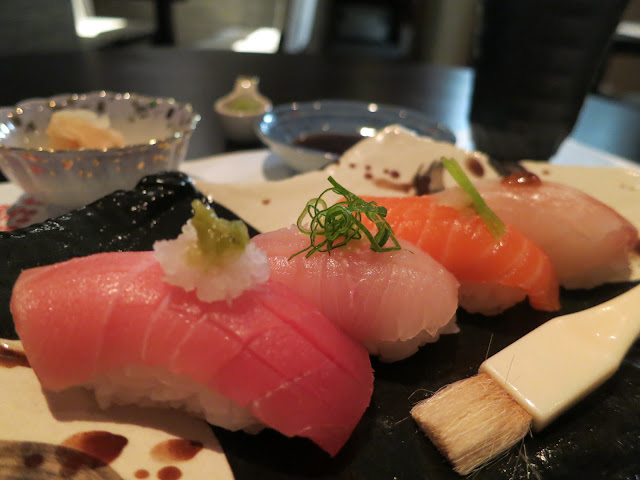 I loved Sushi of Shiori. The once discrete sushi bar has relocated from the modest 9-seater in Euston to a slightly more spacious dining room in Bayswater. The husband-wife team replaced the takeaway counter setup with a more contemporary, minimalistic dining room of dark wood and warm lights, without losing its touch of intimacy. The new name is simply The Shiori.

A couple of months back, I found out at Sushi Tetsu that chef Takeshi was actually trained for kaiseki cuisine as opposed to sushi chef. So I was excited to see what chef will come up with now that he has a proper kitchen to flex his muscles. There are 3 menu options, £65 Hana for 8 courses; £160 Kokoro for 12 courses; £106 Hana with sake pairing. (Their website is suggesting otherwise, but I'm quite sure this was printed on the menu when I visited). I went for the Hana set. 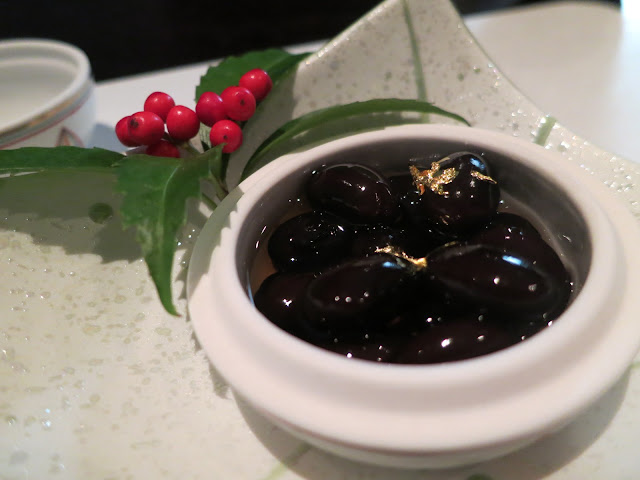 Hitomi said this was traditionally the dish eaten on the first day of the new year. The beans were unexpectedly sweet, and it was similar sweetness to red beans, delicate and subtle. It's a pretty start to the meal. 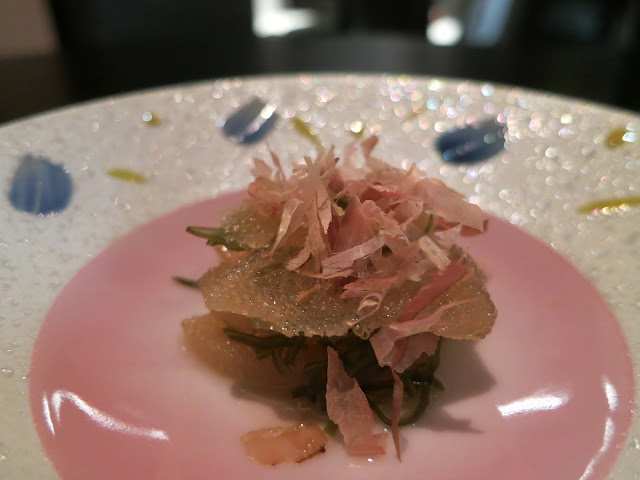 These were slices of compressed roe sandwiching shreds of seaweed. In terms of texture, it was like cartilage, sightly crunchy and brittle. But it was also like fishy popping candy, packed into discs. They released clean, delicate savouriness that was amplified with dried fish shavings. 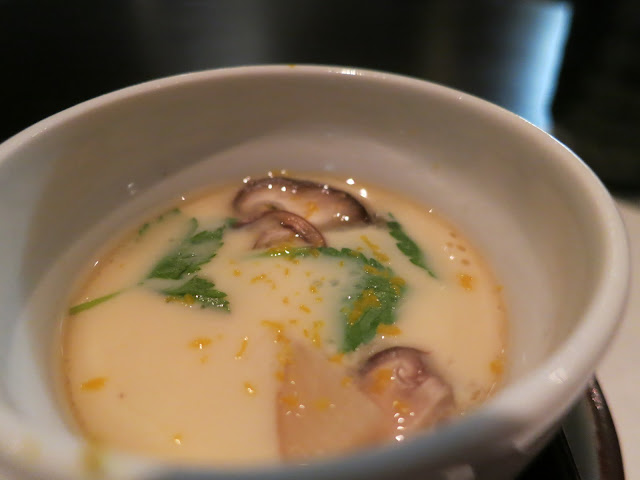 One of my all time favourite starter dish. Silky steamed eggs with gingko nuts, prawns and a pleasant surprise of eel cubes, exquisitely seasoned. 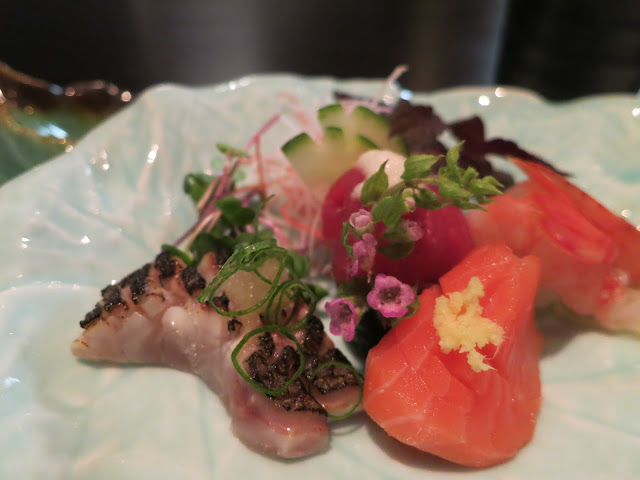 A smaller version of the sashimi platter at Euston, but still beautifully presented. The salmon doesn't look very fatty, but chef must have removed all the tendons because the thick cut of fish almost dissolved on tongue, as if the fish was minced before it was put back in shape, plastering the strong salmon flavours all over.

The lean tuna sashimi was topped with yam, a viscous, glutinous, rather tasteless paste, and it had a lingering effect, drawing out the fishiness of the raw tuna. Torched seabass was a nice change from the usual shiso combination to a gentle smoky aroma. The sweet prawn was super creamy, I thought it was great with the shiso leaf on the side. 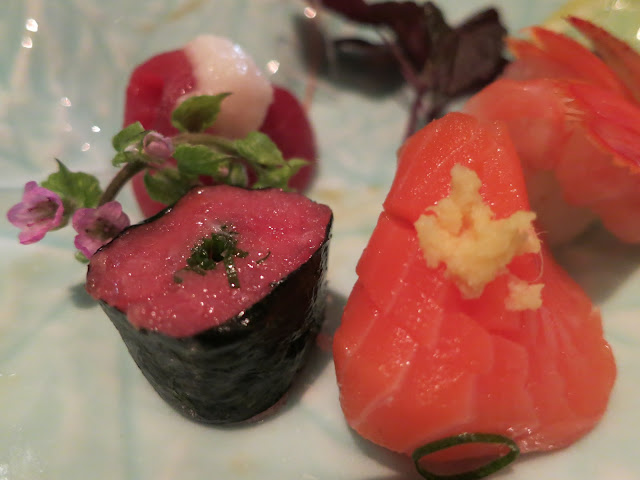 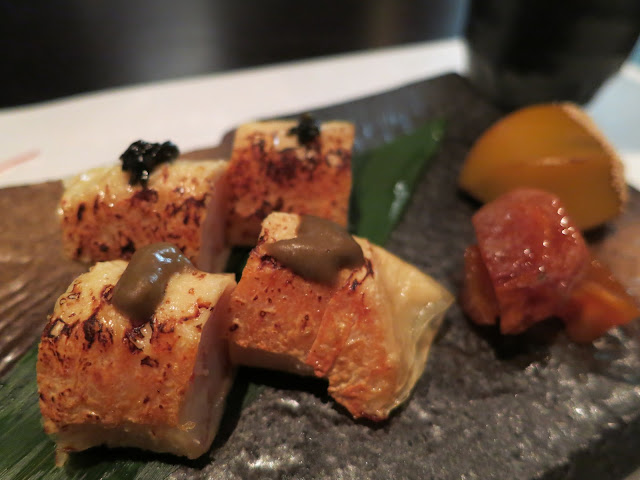 This was possibly the highlight of the menu for the me. Instead of a chunk of one king size crab leg, this was a bundle of 4 legs, wrapped in tofu skin, gently grilled and topped with either crab roe or seasoned seaweed.

The slightly charred skin, succulent crab juice and bouncy muscles were in perfect harmony, beautifully balanced by the savoury roe. I think Hitomi said it was a glazed passionfruit, but I thought it was more like a fig; the sweetened potato wasn't dissimilar to a large chestnut, just giving it a some substance and a rounded finish. 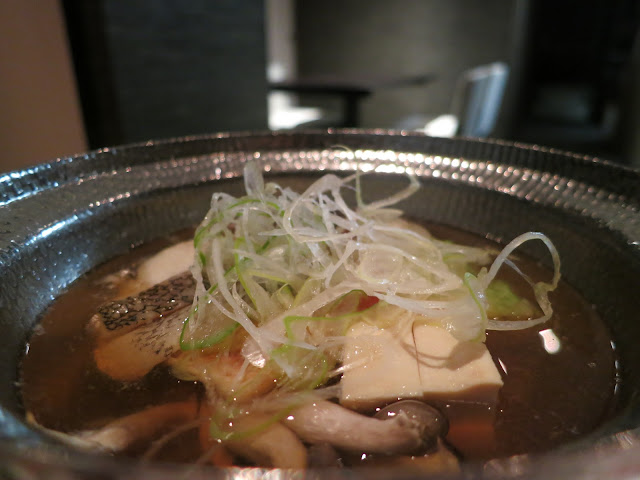 The pot dish would have been a great idea, had the pot really been hot. It was a sub-zero evening and I would have welcomed a pot of boiling broth with winter veg. Except the soup arrived warm, and despite everything being neatly arranged, it looked pretty dead.

It all tasted okay, but I have had much better. The fish fillets were overcooked, enoki were undercooked, tofu cubes were silken and soft but lukewarm in the centre... It was underwhelming in short.

Second round: shrimp, scallop and squid 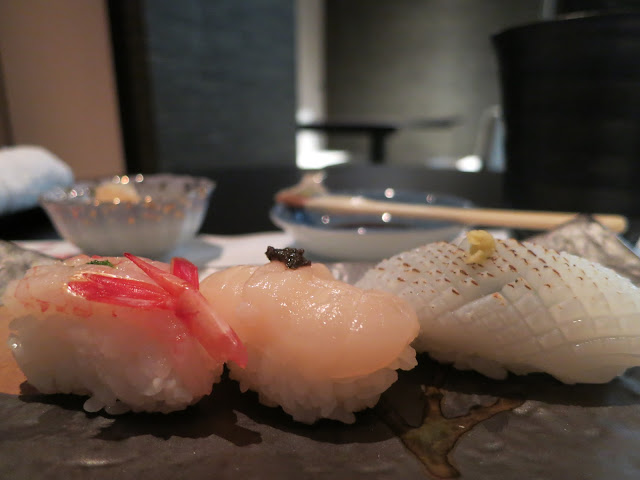 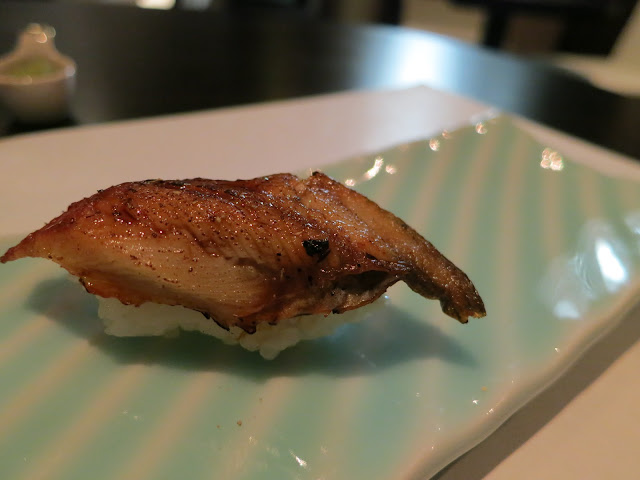 I thought the eel was a bit of an anti-climax, considering my £40 omakase in the old Shiori finished with a seared wagyu beef sushi, this felt somewhat second class.

There was no doubt about quality of fish and chef's accompaniments pairing, they were magnificent, overflowing with finesse. The chu-toro and scallop in particular were eye-rollingly delicious. But for me, something wasn't right about the sushi that evening. In my very humble opinion, I thought the sushi rice was overcooked. There, I said it, please do not stone me. Each piece of sushi felt somewhat mushy because the rice had lost its bounce, there was too much moisture and the grains lost their structure, hence a mushy, squashy mouthfeel.

I asked Hitomi for her opinion, and she simply said she preferred soft rice and there are many types of rice, and Takeshi-san was just making it the way he'd wanted it. I think that's a fair comment. 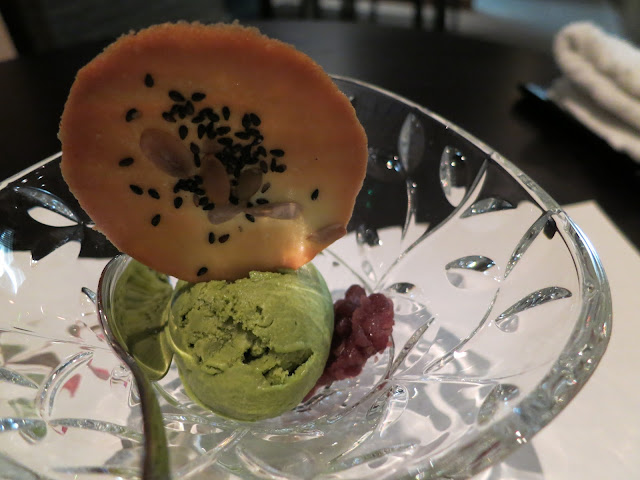 Green tea was much better than the chestnut ice cream I had last time.

I shouldn't, but I couldn't help comparing the ex-Shiori omakase with this Hana kaiseki menu. The number of courses were more or less the same, but now we get less sashimi and more sushi (of inexpensive fish), and the beautiful lotus leaf parcel of eel rice became exclusive to the heftier £160 set, instead we get a half-hearted broth pot.  I'm paying 60% more. I get it, the mark up includes a new location, with comfy chairs and classy, understated decor, possibly a larger range of extravagant ingredients... It's now an up-scale, albeit intimate, Jap restaurant, not that secret find we all knew about, but nobody talked about.

I desperately wanted to fall in love with Shiori all over again, but couldn't and didn't.

Come to think of it, I sort of ruined it for myself - I had too much expectation. I was thinking too much into the kaiseki dining experience, hoping for a tray of picturesque assembly of artistic-looking fare. So when I got pretty much the same as what I had last time, or arguably less, I was disappointed. Had this been my first encounter with Shiori, I would have come out grinning. Afterall the dishes were still work of art, each course a showcase of impeccable skills and Chef tells a darn good story on a plate.

As for sake... Hitomi will sort you out. She knows her stuff.