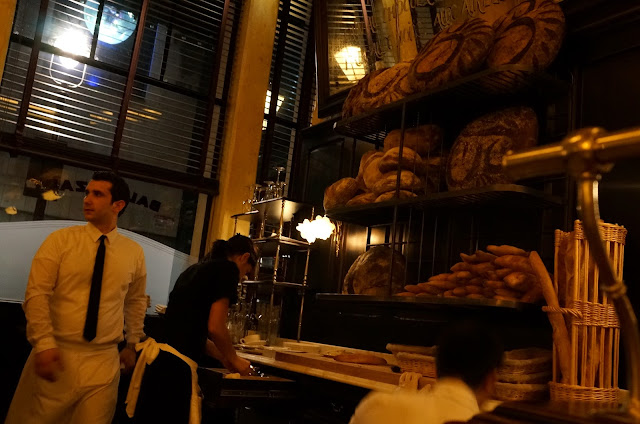 Keith McNally's Balthazar opened its doors in Covent Garden 2 months ago, and booking a table at the more usual dining hours haven't been easy. Thankfully they do hold a number of tables for lucky walk-in diners. So Ana checked on Flat Iron while I worked on Balthazar.

My heart sank when I saw the crowd around the bar and the small cluster around reception. Since the Maitre'd gave me such a warm grin, I decided to put on my best smile and told him I was being hopeful for a table for 2. "I like hopefuls so I'll seat you right away. It's a small table as long as you don't mind." I like this place already.

The setting at Balthazar is not too indifferent to Zedel - brass rails, blood red leather sofa, marble tables and glowing light boxes in dark wooden pillars. That said there is a touch of elegance and class here compared to the hustle and bustle at Zedel. While I sipped on my glass of Morgon waiting for Ana, Dermot O'leary just casually breezed by and I idiotically had my eyes transfixed on him. He smiled and hey-ed and my evening got even better. 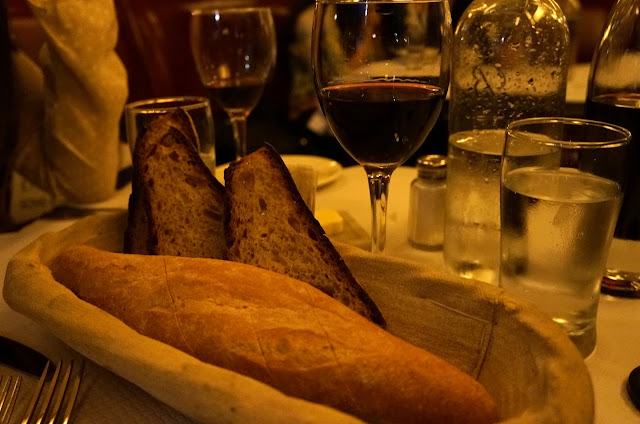 As expected the menu was classic French fare. I knew what I wanted a month ago; Ana struggled as none of the recommendations from our cute waitress appealed to her... in the end she settled for a couple of safe options. 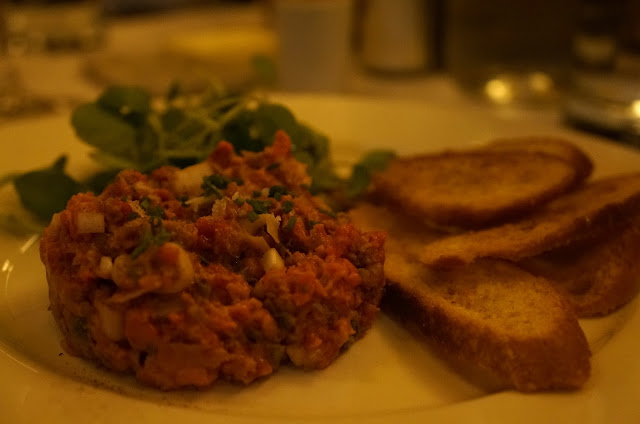 I had been dreaming of a good steak tartare, so the only decision I had to make was whether I wanted this as a starter or main.

The steak was very finely chopped, came prepared and mixed. The seasoning was spot on, slightly acidic but didn't drown the raw meatiness. Normally I'd prefer roughly chopped tartare with a good chew and bounce and maybe some crunch from the onions, but this was buttery smooth that was almost a soluble indulgence. Can't complain. 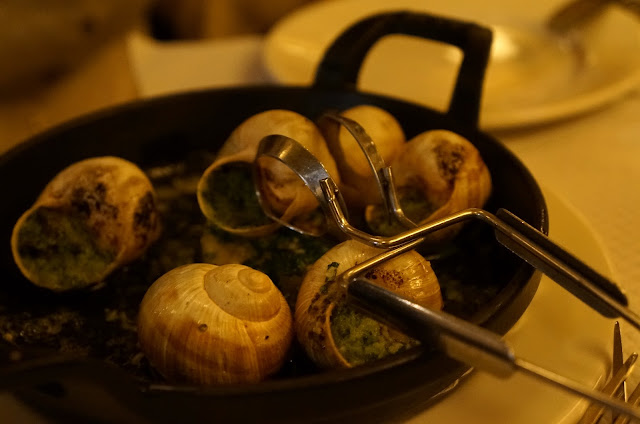 I love snails, and there is no way pairing them with garlic butter could possibly go wrong. Somehow, just somehow, Balthazar didn't get it right. They didn't season it. At All. They looked and smelt beautiful, but the flavours were lacking.

It wasn't just us with retarded taste buds, looks like the Observer also thinks the "escargots were in need of a good dose of heart-stopping salt."

To be fair, when we pointed this out to our waitress, she raised it with the manager whom appeared very anxious and offered us an alternative. Well, we ate it already and it really wasn't that big a deal, so suggested moving onto mains. Anyhow the staff were concerned and offered to remove that off our bill, which was a nice gesture. 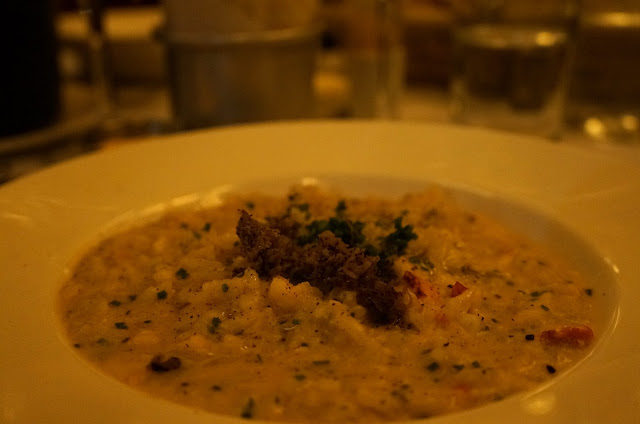 This was the bomb. Remember how I said the cauliflower risotto reminded me of cauliflower cheese at Little Social last week? Nothing like that here. The cauliflower cream took a back seat, just an undertone was subdued bitterness to rein in the truffle fragrance. Risotto was perfectly cooked with a generous dose of sweet, juicy lobster meat. The dish was creamy but not heavy, just balanced and absolutely delicious. 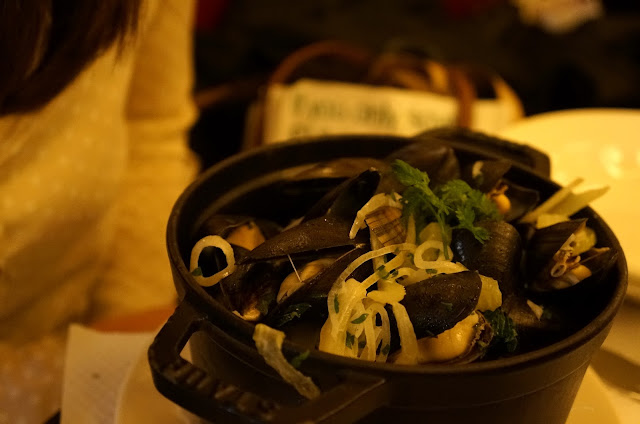 It's a tough one. The dish ticked the boxes of plump, creamy mussels and white wine aroma, but I can't say they were any better than the ones we get elsewhere (say Belgo). It was still good, just not extraordinary. Then I guess, could moules frites ever be extraordinary?

We passed dessert - nothing really shouted and Ana wanted to go to Scoop for some extra dark choc ice cream. I didn't mind, and personally I felt £7 for a creme brulee was sorely overpriced, especially when the average Michelin star restaurant is asking for £8 for some seriously complex creations.

I think I liked Balthazar, but perhaps not entirely for the right reasons. The majority of the dishes we sampled were good, not outlandishly impressive, but good enough to leave an impression. That said the ambience, staff and Dermot O'leary made this dining experience quite a special one. I probably won't make a conscious effort to secure a booking for my next visit, and I wouldn't be too upset if I'm not granted a table. But given the location, I have a feeling I'd be back.

Just for info, Flat Iron offered us 9:45 when Ana asked at 7. This no reservation policy crap has got to stop...

You may also like: Little Social, Brasserie Zedel, Pierre Victoire
at 18:56