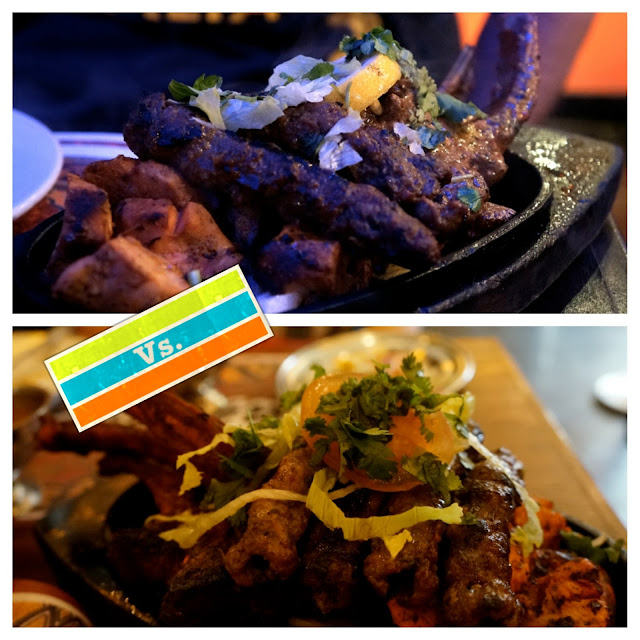 All true Londoners who eat out know about Tayyabs - fact. Grilled lamb chops at Tayyabs are freaking awesome - fact. So when I was told there's a place called Needoo that does it better, I almost laughed at the naivety. Well, turns out Needoo is all over Chowhound and I have completely missed out on the trend.

It was only fair I gave Needoo a go. Afterall I could always just pop over to Tayyabs if it goes wrong since they're only 50m from each other. The restaurant setup is more or less the same, colourful paper mats with their name plastered across it, jug of water and the salad, even the wobbly wooden table... all very familiar, except we were seated under an odd blue light in the middle of the dining room, so I probably looked blue and ill throughout dinner.

For the purpose of good comparison, we ordered more or less the same things I'd usually go for at Tayyabs. 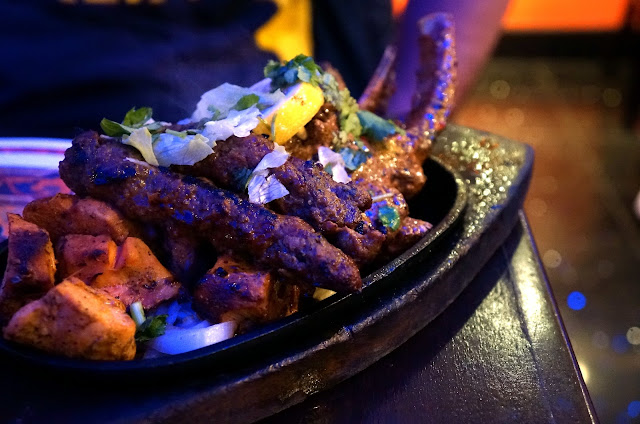 On my first bite of the chop, I thought the rumours were right: these are better - an equally impressive rub of spice with the subtle lamb tang that came with the fat, and the meat was more tender too. By the time I got the end of my first chop, though, I wasn't so sure anymore. I think the marinade was probably slightly too heavy handed and it got a little too salty I had to reach for my water. Come to think of it, the cut could be thicker with more meat too... The platter here was generally hotter, with a stronger dose of spice. 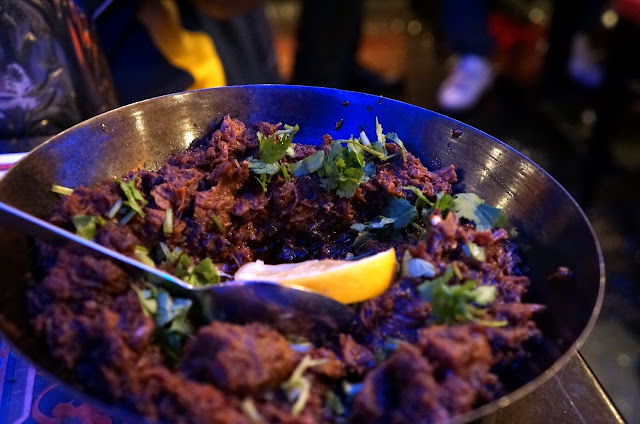 The sauce, or more like paste, was built up starting with a masala paste, followed by layers of cardamom, coriander seeds, herbs of fenugreek and rounded off with chilli powder and mace powder (by the way this all came from Jai - I'd have to be possessed to come up with ingredients I had never heard of). The marinated meat was then cooked in paste and stock, until the gravy reduces to an almost dry paste, hence the name of the dish.

I think the dry meat curry here beats Tayyabs. There were more layers of flavours - it started off with sweetness, then the heat began to seep through as the green chillies hits the taste buds. There was more sauce for the naan to mop up and the lamb cubes were almost shredded to soak up more flavours and marinade.  This was brilliant. 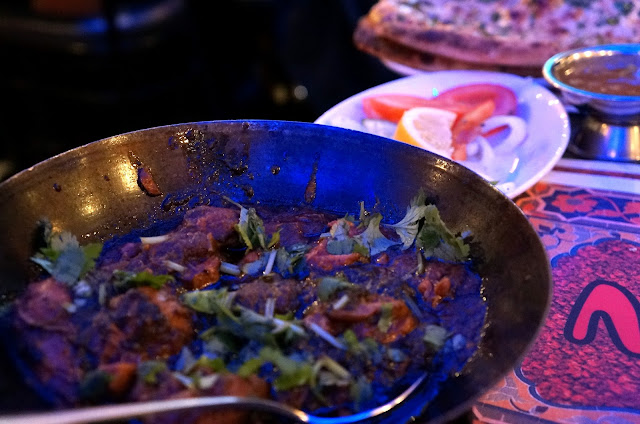 This was hotter than I expected, I thought dishes with spinach would be somewhat milder. Silly me. Again the meats were succulent, flavourful and super well-cooked; the curry was deep and intense with a sharp kick from herbs. 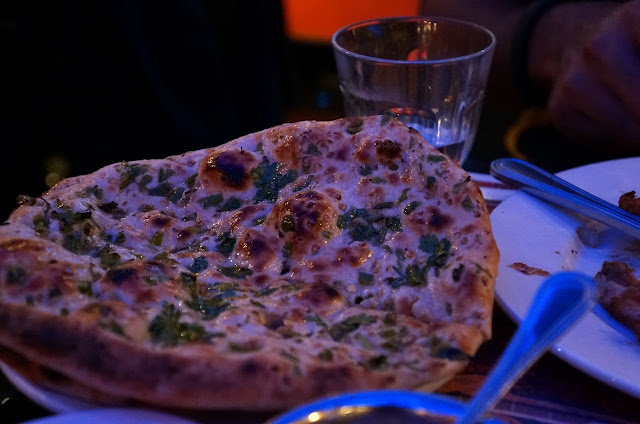 Personally I prefer the naan here, purely because there was more ghee and hence nuttier and more fragrant.

Because I couldn't remember what Tayyabs was like, I paid a visit the following Sunday. And it pretty much confirmed our verdict about Needoo. Tayyabs still has an edge over grilled meats, the rub was less salty but more flavourful, spices were more balanced and controlled with the heat. That said Needoo does the grilling better as the chicken cubes were more bearable. 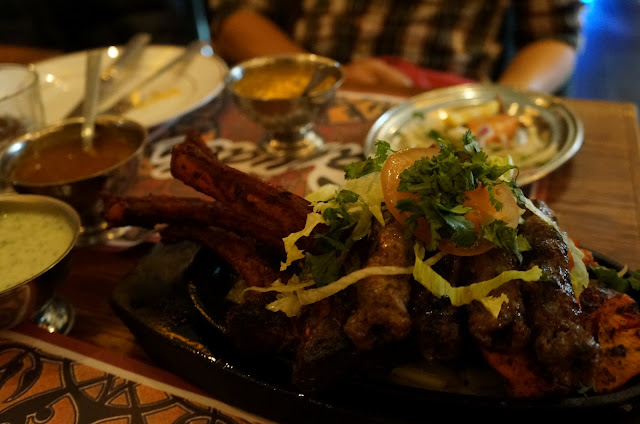 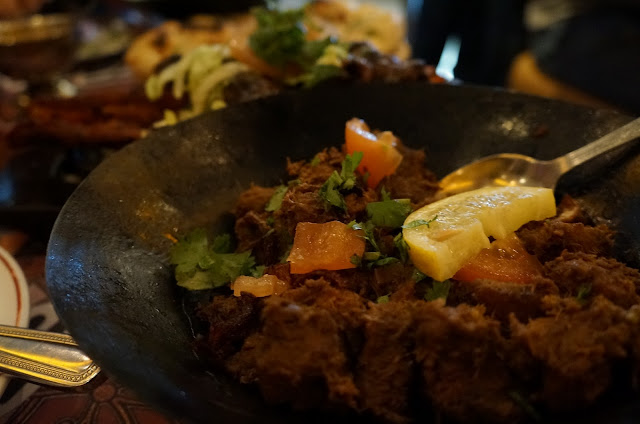 Dry Meat here wasn't as good as Needoo, the lamb cubes were fine if there was a lining of fat, otherwise some were a little too dry for my liking. And I definitely prefer the sweetness of the dry meat curry at Needoo. 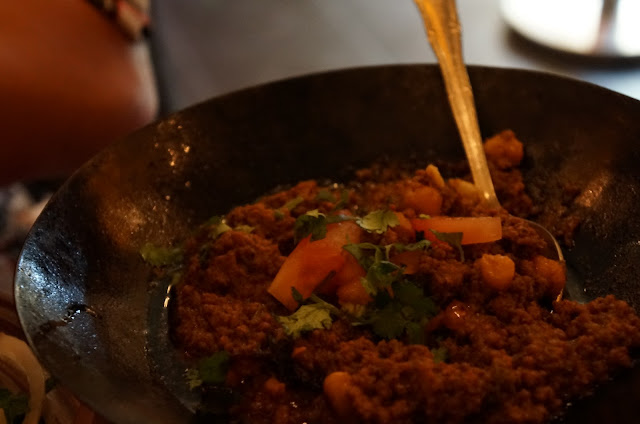 Instead of Palak chicken, we had Karahi Keema at Tayyabs (because having an almost identical meal two sundays in a row is depressing). The tomato based paste with reined in heat was perfect.

Was Needoo better? Yes and no. Tayyabs is still firmly the king of lamb chops and there is no real competitor in sight, yet. Everything else Needoo has won me over, especially the curries. I don't know jack about authenticity when it comes to Punjabi cuisine, I could be completely wrong - it could have been a one-off at Needoo, my great mood during the evening or my awesome company that meal - but I'd pick Needoo over Tayyabs. There, I've said it.

You may also like: Lahore Kebab House, Dishoom
at 17:49