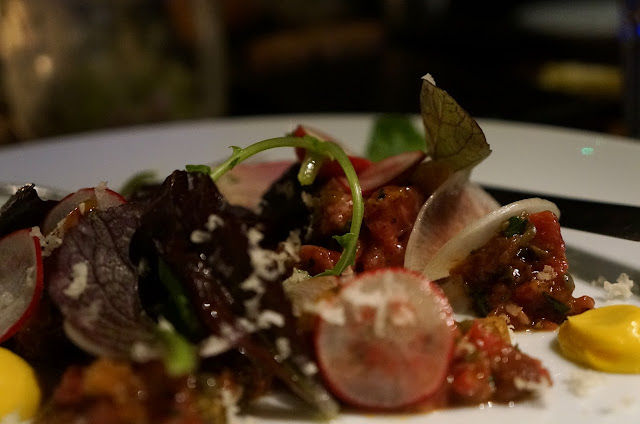 Slightly further from Pollen Street, Jason Atherton has humorously invaded the phonetically confusing Poland Street in soho for his third establishment. This 3 storey restaurant comprises of a bar on the top floor, main dining room on ground floor and a chef's table / counter in the basement.

We arrived early so we went upstairs to the bar for a couple of cocktails. The bar had a low-ceiling, meaning very loud echos; sofas were a little too straight-backed but there were plenty of tables. My Kingergarten Cup was sweet and skittle-flavoured and James's Japanese Slipper was pleasantly green-tea-type bitter. 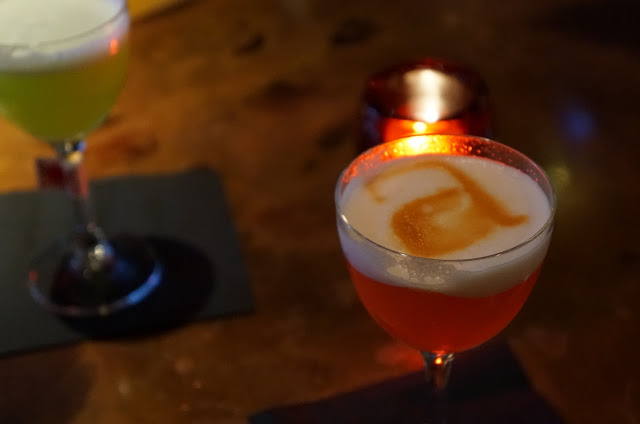 The dining room was casual, almost a shabby chic kind of feel to it with the wooden floor and table. 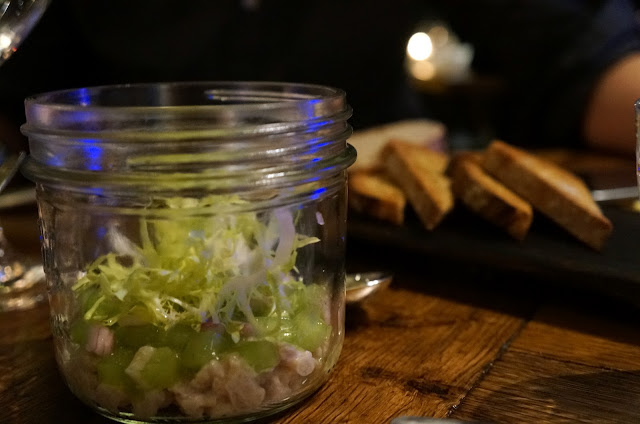 This was one of the 4 jars to share, and the intention was to have some munchies while one mulls over the menu, almost like bar snacks. Adequately fishy with gentle acidity - perfect to get the stomach juices running. 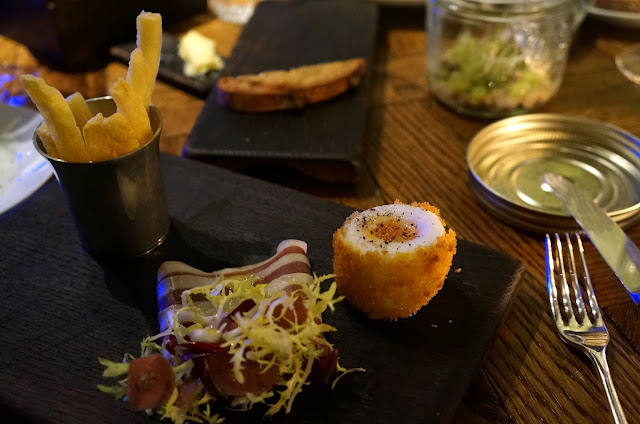 This was incredible. The chips were eaten like 'soldiers' by dipping into the yolk, and the surprise came when we broke into the egg to find its crumbly case infused with truffle oil. The wafer thin smoked duck breast was insanely delicious. the generous rind of fat melted away on tongue, releasing its nuttiness; the lean breast meat was ultra smokey with concentrated flavours. This seemingly simple ensemble was packed with different textures that slowly unravelled; strong truffle fragrance and smokey aroma worked beautifully together. Loved it. 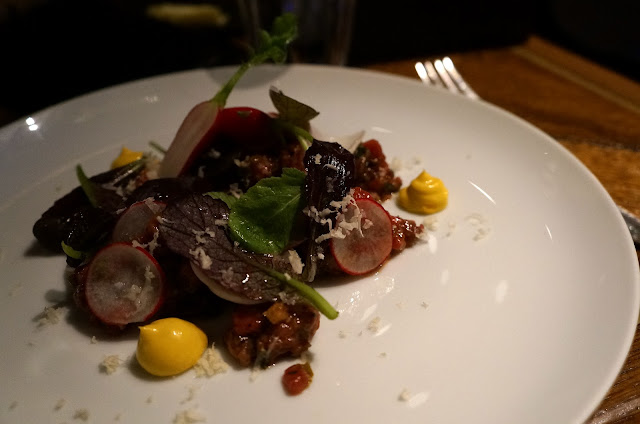 A new take on the classic dish, almost a deconstructed version of tartare. Needless to say it was super fresh. The beef was roughly chopped to retain its bounce, with no trace of tendon to give it the most delicate textures. The gentle acidity from pickled radish was complementary rather than intrusive, together with blobs of creamy mustard and pungent leaves, it was a zingy and zesty tartare. 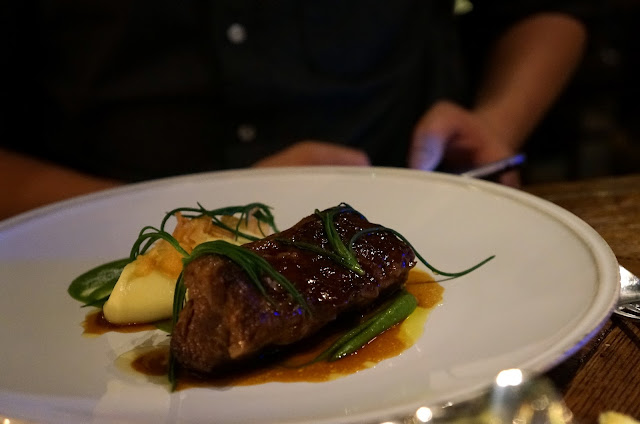 The lamb neck was tender and packed with lamb juice; perhaps a little mundane on the leaner parts, but smear it with the ricotta mash the entire hunk of meat sprung to life. The mash stole the show. The consistency of the mash was close to a thick bechamel sauce with a healthy dose of crispy garlic shavings. It could have been the garlic, the tanginess of the cheese or the overall creamy richness, whatever it was it was addictively tasty. 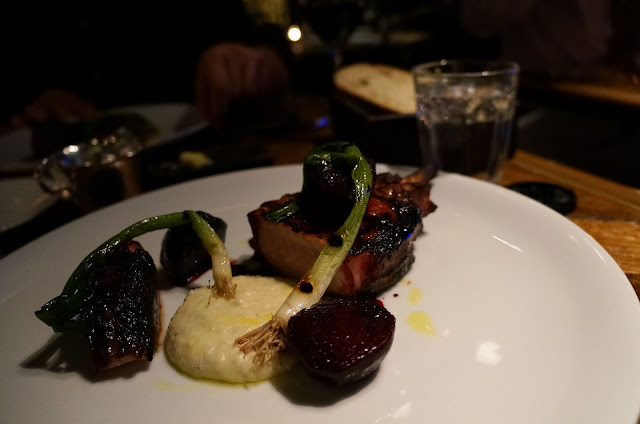 I thought the pork chop at Little Social was beautifully done so I went with pork again here. Another inch-thick chop but this time the rind of lard was much thinner and hence a lighter touch to the dish in general. The sweet beetroot added a gentle crunch to the perfectly cooked pork, and the sweetness brought out the piggy flavours of the meat. I think I preferred the one at LS, purely because I like fatty meats. This was still one delicious chop. 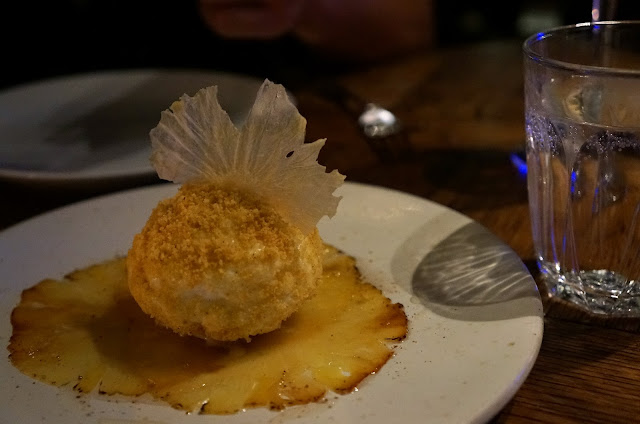 We shared a this salt and pepper dessert. It sounded strange when I first read it, then come to think of it, didn't by grandma used to submerge fresh pineapples in salty water to stop it from oxidising? And some used to soak watermelon in salt to make it sweeter (?!)  This was interesting, I can't say it was easy on the taste buds and it did take a couple of spoonfuls to get used to the mixture of sweetness from the ice cream, fruity citrusness from the pineapple sheets, heat from the peppers, all bundled together with savoury salt. But I liked it, refreshing and adventurously different.

There is one criticism though: timing. I felt somewhat rushed throughout my meal. Within 30 seconds of being seated and introduced to the day's specials, we were asked if we wanted to order any 'jars to share' while we choose from the menu. I had to take a quick read of the options and went for the mackerel tartare. Another minute later we were asked if we wanted to order wine. Erm... I do but I would like to make that decision after I know what I'd be ordering first... then the bread came and my glass of wine came and they asked again if James decided what wine he wanted... It must have been a good 10mins of constant interruptions before I got to read the menu.

The mackerel tartare jar arrived 2 minutes before our starters, so much for a nibble while we make up our minds. A bit more time between our courses would have been good, I wouldn't have felt so rushed. Not exactly deal breakers but I felt strong enough to comment on it.

I'd say the Social Eating House goes somewhere between Pollen Street Social and Little Social. It offers a tad more than Little S and not as refined as PSS. I thoroughly enjoyed my evening here, from my sweet cocktail to my semi-savoury pineapple dessert. As expected, food was meticulously prepared and, especially the starters had an element of wow and twist without being pretentious.

I am already planning my next visit; I saw the mushroom on toast being served in a plastic bag and that seemingly out of place mac and cheese also got my attention, but surely I should also give their steaks a go....

You may also like: Launceston Place, Medlar, Gauthier Soho, Corner Room
at 16:58