The Long Wait at Dabbous 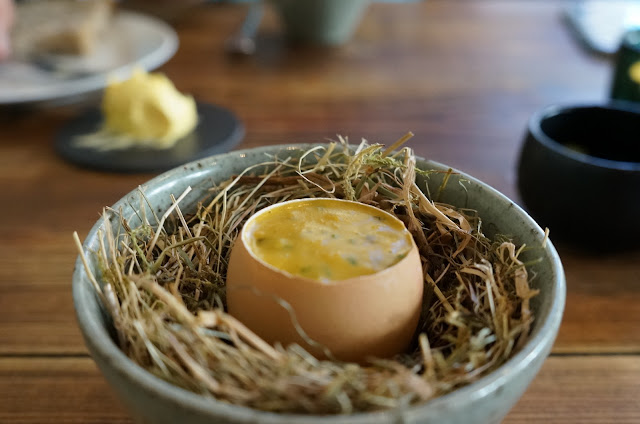 When did I make this reservation...? Ah Last September. It's crazy. Their automated message at the moment is that they are booked up to October for weekday and till end of year for weekends. Yea, I know.

Dabbous was an instant hit since last January, but the waiting list is ridiculous - I went through 2 relationships since I made the reservation, only to secure a late lunch seating at 2:30 on a Saturday. But it all made sense when I saw the restaurant only seats 35 covers max. It makes sense. 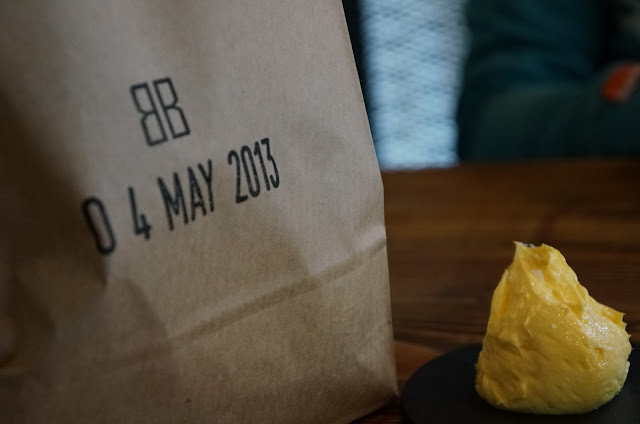 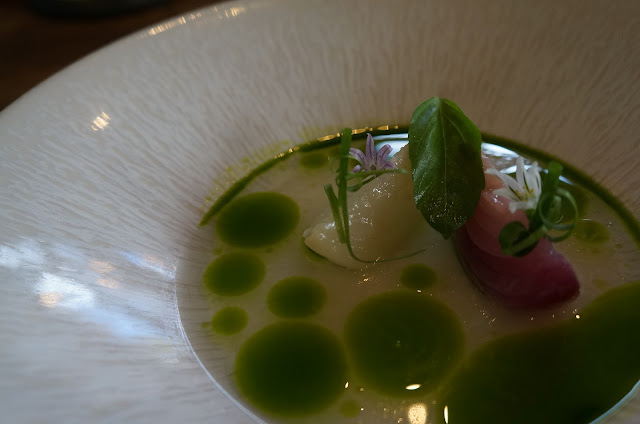 I read this a few times and still had no idea what it was. Seeing James went for scallop, I had to go for the alternative.

It turns out to be a clear soup with basil extractions with two types of onions (alliums). The infusion was nice with a pleasant acidity that got the palette going, though it wasn't spectacular. 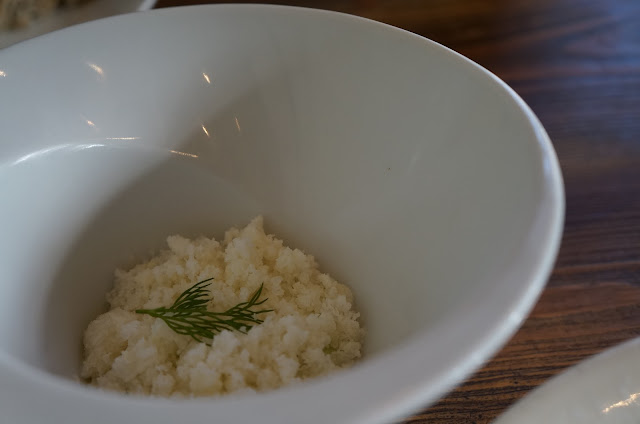 Just when I thought I knew what scallop tartar is supposed to look like, this arrived. Under blanket of shaved milky ice were diced cubes of soft scallop, which was relatively subdued in flavour as the oyster emulsion roamed in with its distinctive minerality. The combination was very refreshing, unlike the more trial and tested addition of cucumber for coolness, the milky ice did not carry an earthy tone that could intrude the delicate shellfish. It was deliciously clever.

Ah I loved it. It was a spoonful of scrambled egg in half a spoon of butter with another spoonful of concentrated fungi fragrance. The egg was indulgently rich and smooth, I could do a dozen. 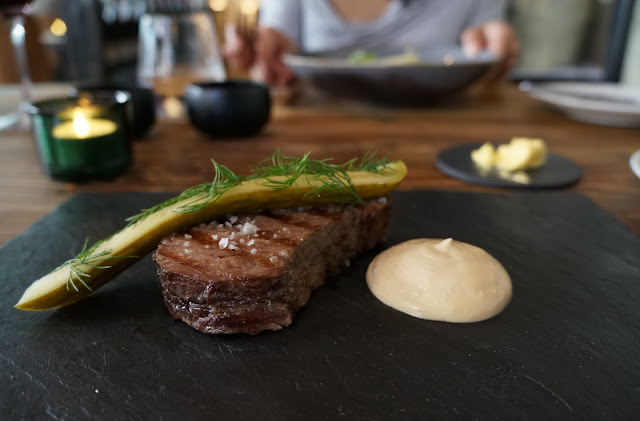 This reminded me of the short rib we had at Dinner by Heston at Mandarin Oriental, which pretty much sums up how good this was. My knife effortlessly cut through the muscles like a hot knife slicing through butter. There was a thin layer of fat and another thin layer of melt-in-mouth cartilage, the texture was decadent. Flavours were controlled and structured; the subtle sweetness from molasses balanced well with the punchy mustard, which amplified the smokiness of the rib, just as an undertone leaving an aromatic oaky aftertaste. An incredibly sophisticated creation. 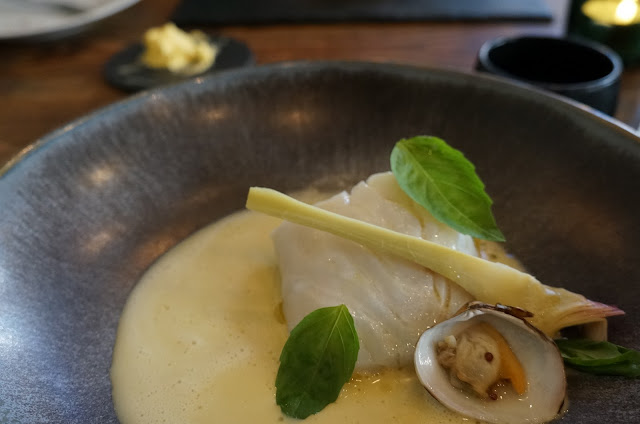 Just how I like it, a tad uncooked and glowingly translucent, soft and flakes off to submerge in the sauce. It's a very crisp dish with cleaner and purer flavours. The sauce was thin and almost broth-like, slightly acidic with mustard seeds. The clams were meek, which was somewhat disappointing, I was hoping for concentrated shell fish juice, but these were more for decoration purposes. It was nice, but I preferred the short rib. 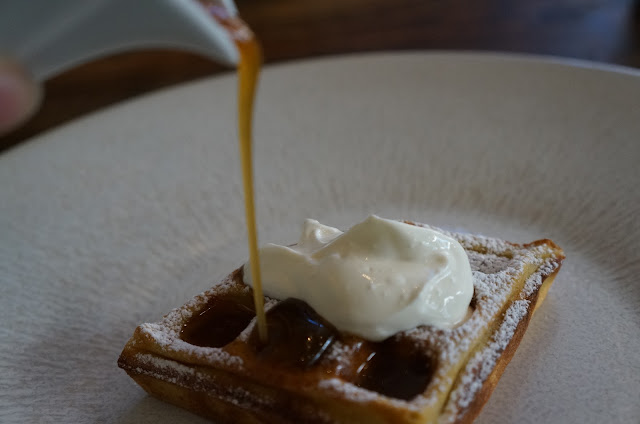 Waffles are often seen as a rather juvenile sweet treat. The insanely smokey fudge sauce brought it a few levels up and added elegance and finesse. The smokey fudge was so much fun too, the unlikely pair made us question our taste buds while savouring the lingering smokey essence. Ingenious. 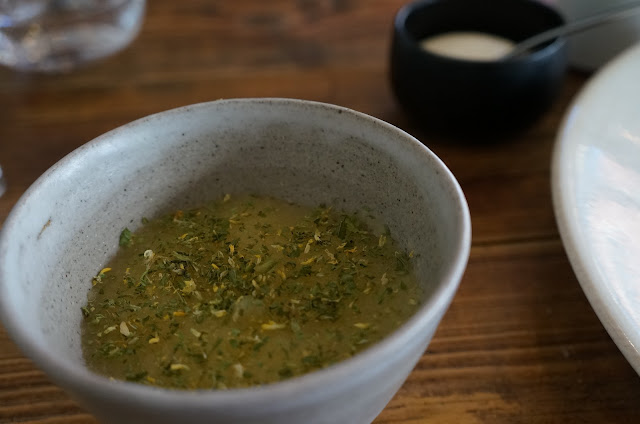 It was like a reversed apple crumble, where crushed apple replaced the heavy, crunchy crumble and the buttery brioche soaked up the custard. The clover was a beautiful touch to lift the sugary weight. This was less exciting by comparison, but still scrumptious. 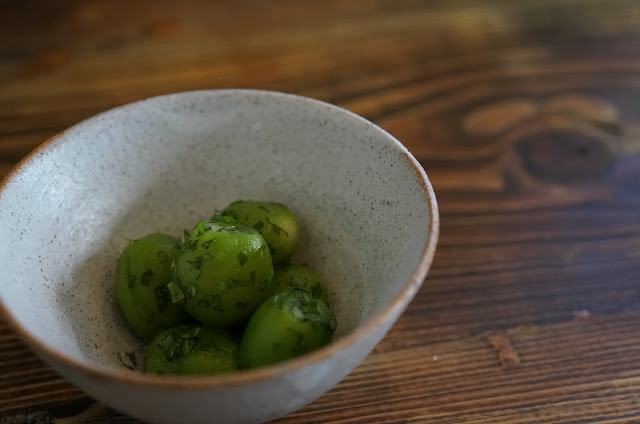 Dabbous reminded me of Roganic when Ben Spalding was still heading the kitchen. I'd say it's haute cuisine - contemporary, elegant and experimental. What I loved was the intimacy in the atmosphere paired with sophisticated, elaborate recipes. Every dish had a unique touch, a bit of quirk, a bit of cheek and a healthy dose of vitality.

Now that you have heard me yapping on about food you won't get to taste for another month, I'll feed some good news. Ollie Dabbous is looking to open his second restaurant to cater for the hungry waiting list. It was still in the planning stage a couple of months back, let's hope he makes up his mind soon.

You may also like: Duck & Waffle, Corner Room, Social Eating House
at 16:19