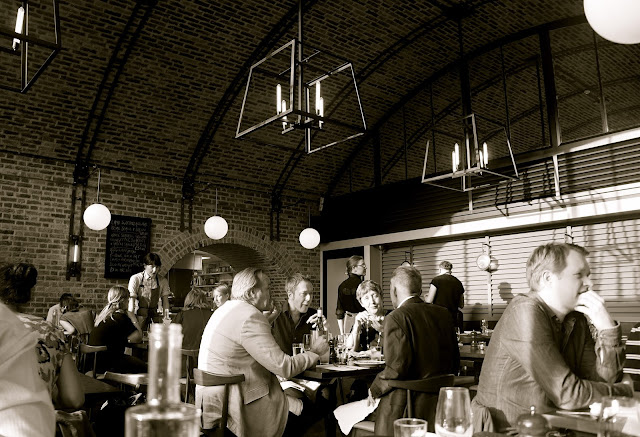 Part of the joy of eating at Beagle was the intermittent rumbling from the Overground train running above our heads. Nested right next to Hoxton station, the restaurant attracted the East London bunch with its bare bricks, railway arches and iron candelabra, not to mention a promising kitchen headed by James Ferguson from Rochelle.

The cocktail list looked too good so we decided to start with Summer Cup for me, which was exotic and fruity, and Krank for him, way too whiskey-y and bitter for my liking. Friend highly recommended their pulled pork from the bar snacks, unfortunately it wasn't on the menu that evening so we randomly picked others. 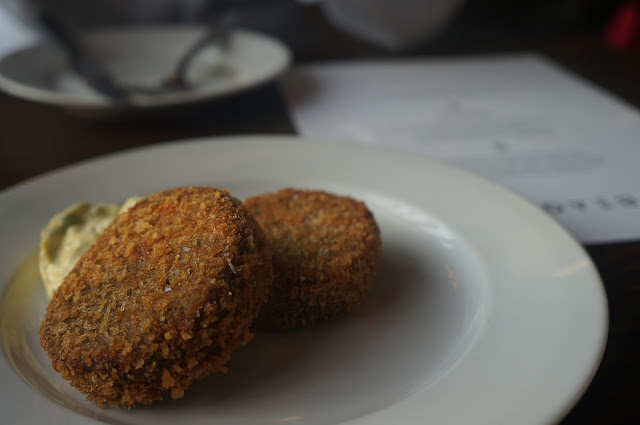 I am not usually a haggis fan, purely because of bad experience of dodgy haggis that smelt so strong of offals I thought a public loo landed on a plate. These were fine.

Unlike the more traditional haggis in a sausage casing, this was presented more like pigs head - encased in breadcrumbs with the all the pluck neatly packed. What I particularly liked about it was the moistness and bounce in the cake, probably because it wasn't stuffed with overcooked grainy liver. Plus a healthy dollop of eggy bernaise, it went down very well. 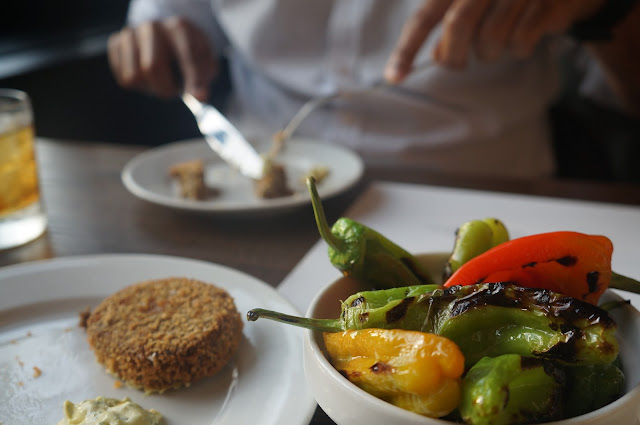 In short, pepperoncini and I started on the wrong foot, I was never going to like it. No idea why, maybe it had something to do with the macaroncini at The Endurance the previous night, but my mind was geared towards something greasy and satisfying. Then these arrived, and the smirk on his face basically meant I was programmed to dislike these.

On a more serious note, it was lacking in seasoning and despite the tenderness and juiciness, there was very little flavour from the veg itself. 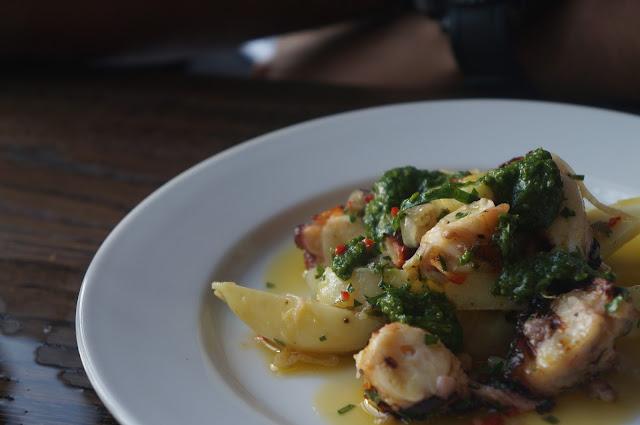 The chunky octopus tentacles were slow cooked to an almost marshmallow texture, slightly springy but soft and squidgy. It was also very succulent and retained all its sweet juices. Normally I'd object to potatoes with seafood, but these delicate wedges were generously seasoned and well greased to mingle with the rest of the dish. 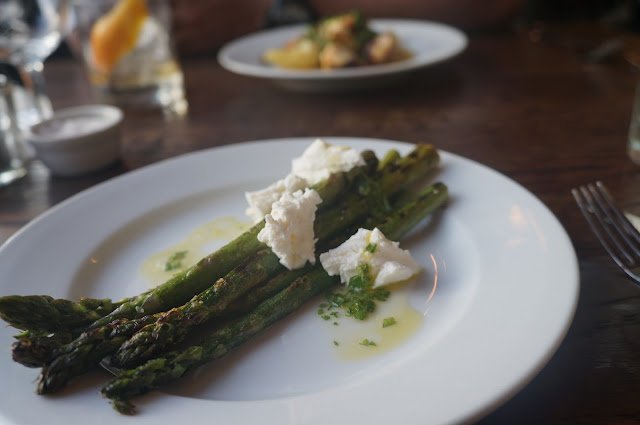 Nothing really shouted at me when I was looking at the menu... I was choosing between watercress soup & poached egg and grilled asparagus. Our waitress recommended this because it was in season.

I am now very sure, I do not like asparagus enough to have as a course on its own. I don't mind it in my risotto or as a garnish on my mains, but I simply don't understand its charm on its own. The goats curd is deliciously creamy and subtle, but in my humble opinion it doesn't work with the asparagus. Maybe wrap some serrano ham around it, pair it with a good soft boil egg as everything tastes good with a gooey egg yolk... but I still wouldn't fall in love with it. 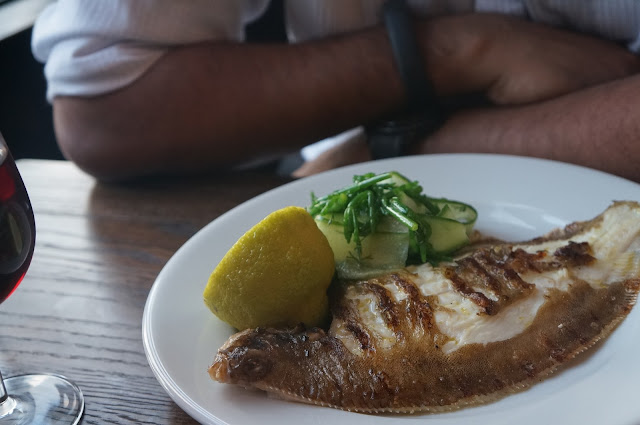 I felt slightly bad about cornering him into the lemon sole just because I wanted the hogget. But given how I had been unlucky with the menu so far, I wasn't going to budge.

To be fair, it was a very well cooked sole, it was spared from the typical earthiness and the fish was slithery soft. But it was still a very ordinary dish with little surprises in the recipe. Good, but not extraordinary. 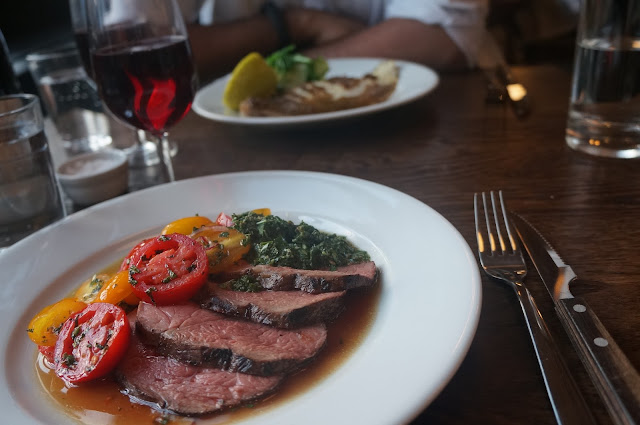 The hogget was the only part of the meal that got me paying a tad more attention to my food. Definition of hogget varies in countries, but generally it's lamb between 12-24 months. Since it's slightly older than the usual young lamb, the flavours are richer in the muscles.

It was cooked to a perfect medium. The meat was incredibly tender and the usual milky, weaning tang of lamb was substituted by stronger meatiness, almost a touch of gaminess to it. The tomatoes were sugar sweet and complimented beautifully with macho muscles. Really enjoyed it. 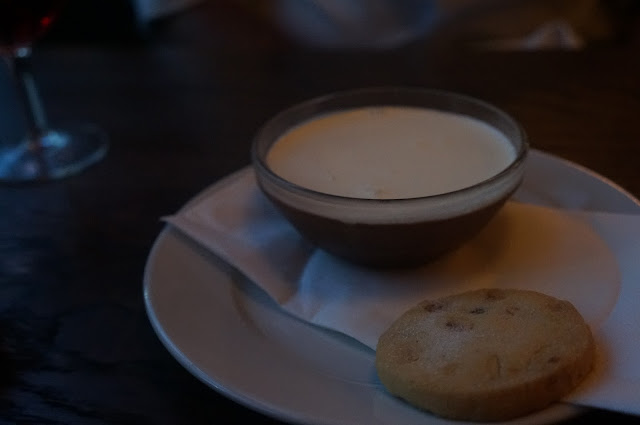 The lag time between us placing the order and this hitting our table was approximately 45 seconds. I know it came straight from the fridge, but still. Anyway it was velvety chocolate ganache on top of thick caramel, topped with a thin layer of single cream - a good finish that wasn't overly sweet.

I can't say I clicked with Beagle; feels it's somewhat style over substance. A small part of me regretted picking Beagle over Social Eating House for this occasion - at least with SEH perfect food is guaranteed and the bill would hover around the same mark, but there would be more efforts and surprises in the dishes. Don't get me wrong it wasn't disastrous, but it didn't help me impress either.

Despite not falling in love with the restaurant at Beagle. I did return with Ana for the bar because the cocktails were impressive. My Somerset was an intricate balance of bitter and sweet, Ana's Yorkshire rhubarb was slightly fizzy and very easy to drink. 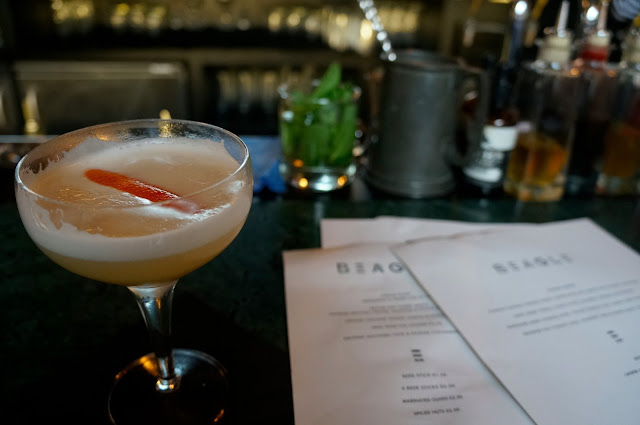 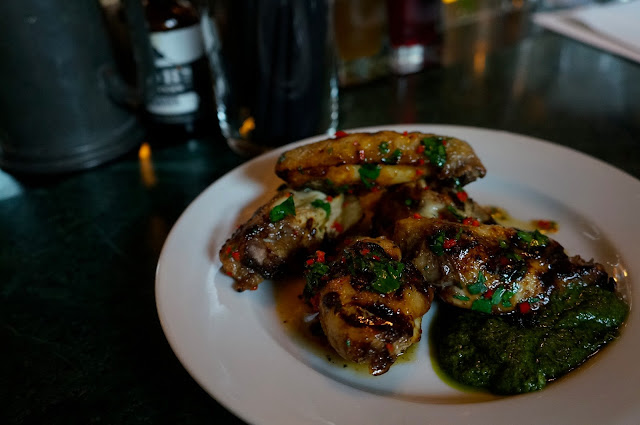