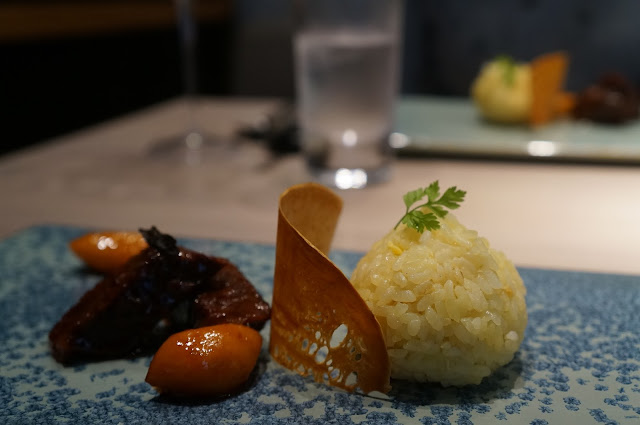 A few months back I dined at Bo London, and I still left thinking fine-dining Chinese is debatable. So despite having had HKK sitting on my eat-list for months, I was waiting for the right time and the right occasion to give it a go. The opportunity presented itself – it was my last weekday lunch in the area (for now anyway).

We started with some good cocktails. My Red Lotus with Glenmorangie and plum sake was absolutely delicious, deep and syrupy. The sweeter Floating Goddess and the grapefruit-based Bitter Fortune appeared to have gone down well, too – though Jo was very envious of my cocktail glass.

Emma and I went for the regular 4-course lunch; Ruk and Jo opted for the seafood version. 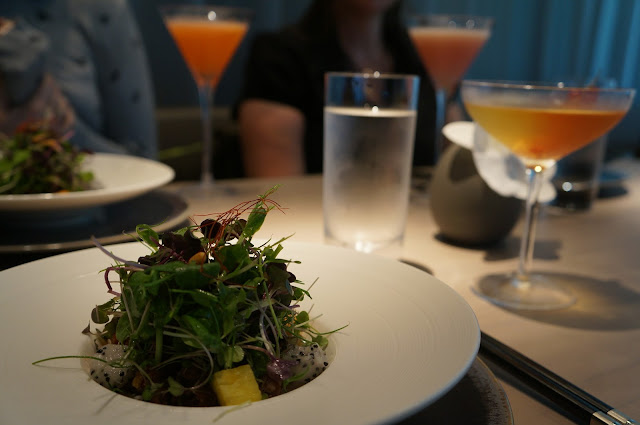 Strips of duck were hidden under the mountain of salad leaves and balls of dragon fruit and honeydew melon. The duck was roasted to perfection with a delicate, brittle skin that retained its crisp after scooping up the dressing. Instead of pairing the duck with the conventional hoi sin sauce, it drew its sweetness from the fruits to keep the salad light. Great start. 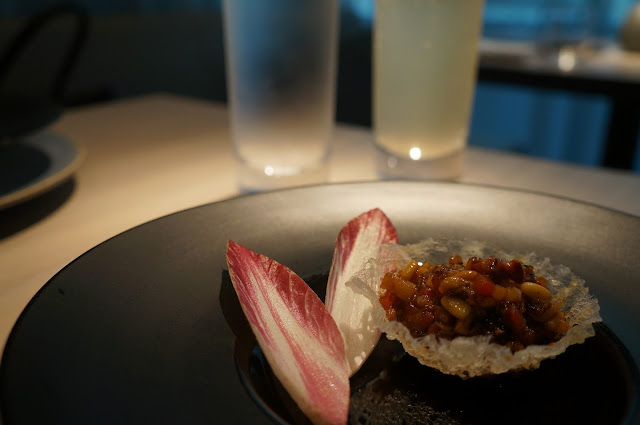 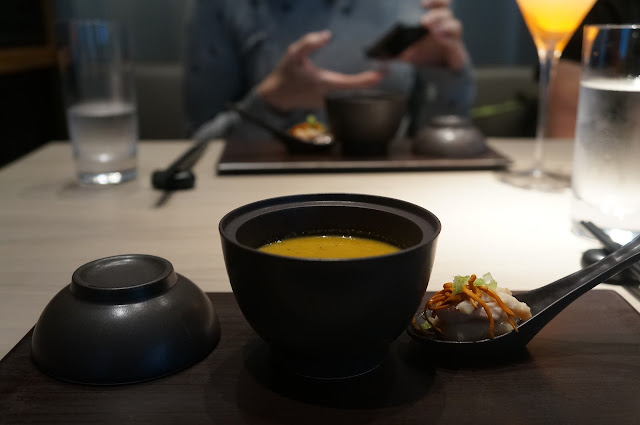 I couldn’t make up my mind about the soup. The broth carried the flavours of the traditional Chinese soup, one that takes a good 3-hr simmering. But then its consistency was more western like, fairly thick and viscous. I guess I was confused.

The truffle was very subtle in the soup, in a good way. It added a lingering aroma as opposed to overpowering the delicate flavours. The strips of chicken on the side, however, were uninteresting, partly because it was cold. I prefer my soup piping hot, had it not been lukewarm, I may have enjoyed it more.

Seafood: HKK Supreme seafood soup
I had a haunting suspicion that the seafood version was even better – with a lobster broth as base and strips of prawn and scallops on the side, it’s bound to be, right? 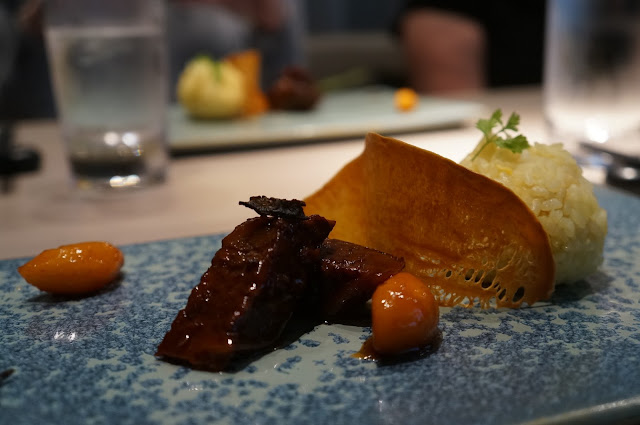 The wagyu beef was slightly disappointing. Firstly I couldn’t taste the jasmine tea because the beef was coated with a barbecue honey glaze, which masked the gentle tea smokiness. Then the beef was slow-cooked to force tenderness. This almost defies the quality of wagyu beef, because I couldn’t taste the fragrant bovine grease from its fat marbling, which had been drained from the muscles. The meaty flavours were also drowned by the sauce that was a tad too sweet. The meat still disintegrated into shreds with the softest touch from the knife, but it didn’t need to be wagyu – ox cheeks or oxtails would have had the exact same effect.

The egg rice was very bland, top marks for keeping it absolutely grease-free, but it needed seasoning. The water chestnuts nonchalantly sitting on the plate, turned out to be the highlights. The gooey glaze worked well when it was diluted by the crunch. That said I agree with Emma, they would have been less intrusive in smaller cubes. 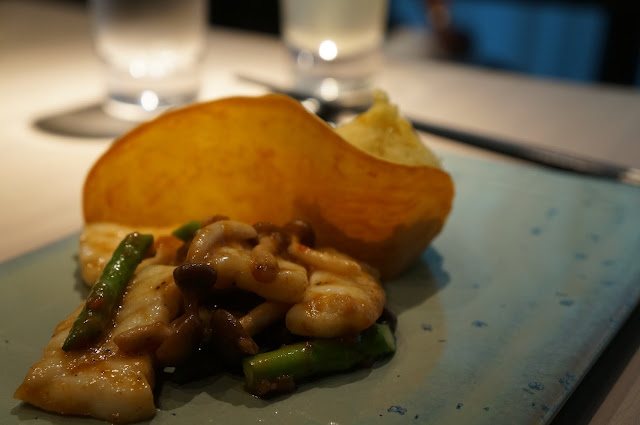 Unlike Ruk, I’m not a fan of monk fish – prefer my fish flaky and soft. Jo left ALL her veg untouched. Enough said. 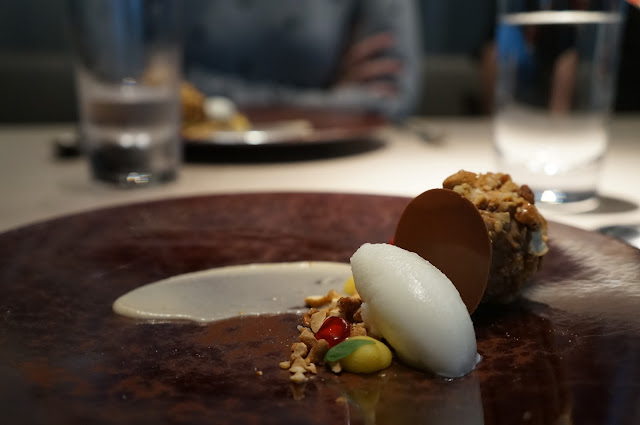 The dessert was beautiful – a dense ball of nutty ice cream encased in a crushed cashew nuts. The milk parfait smoothed it all up, with a small kick from the salt and a bit of zing from the pomegranate. 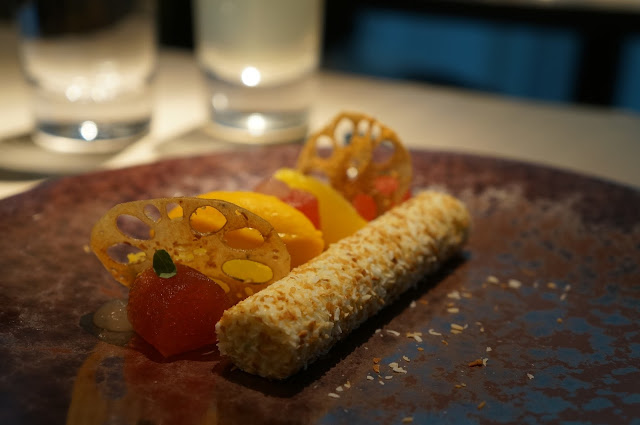 I didn’t try this but Jo mentioned she might start adding lime in her panna cotta – they must be doing something right.

As far as fine-dining goes, I think HKK got it right – the super slick décor and lighting with peach-shaped lights dangling from the ceiling, the beautiful china and refreshing infusion of western finer ingredients in classic Chinese dishes. It didn’t quite tick all the boxes, though. The execution could have been more precise, recipes could have carried more finesse, and I suppose it was lacking in the sophistication I anticipated. Perhaps the dinner menu would have allowed chef and his team to show off his skills more.

I still enjoyed HKK, but mostly because I was in great company.

You may also like: Bo London, Pearl Liang, Yauatcha
at 00:30