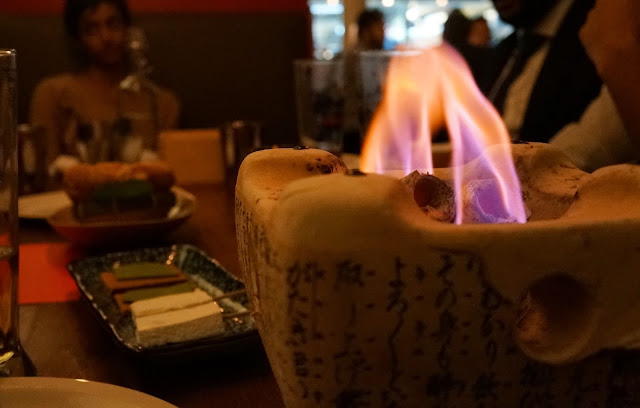 The Taiwanese modernised the traditional steam buns into Chinese burgers by stuffing them with various types of slowcooked meats. Somewhere along the line, a Chinese restauranteur in NYC put a Japanese spin (and name) on these gua bao buns and now these Hirata buns have taken the town by storm.

I wanted to try Flesh & Buns few months ago; the buns have generated some noise, but not as much as their S'More dessert. But for obscure reasons, venturing all the way to Covent Garden for some steamed buns takes much more motivation than anticipated. So we kept deferring it, until the opportunity presented itself. 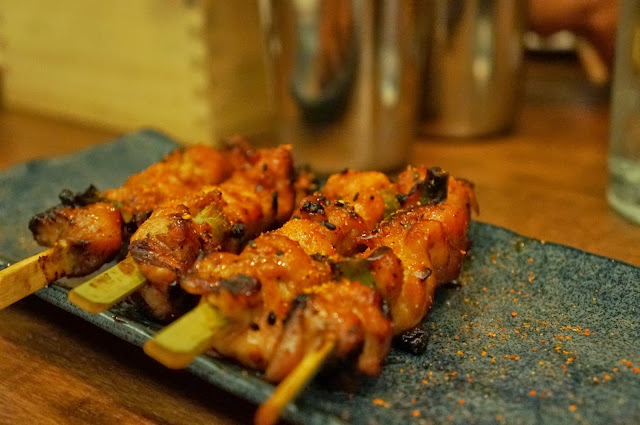 Rarely can chicken skewers go wrong and these stuck to the original recipe, pieces of chicken thigh were tender and well-seasoned. 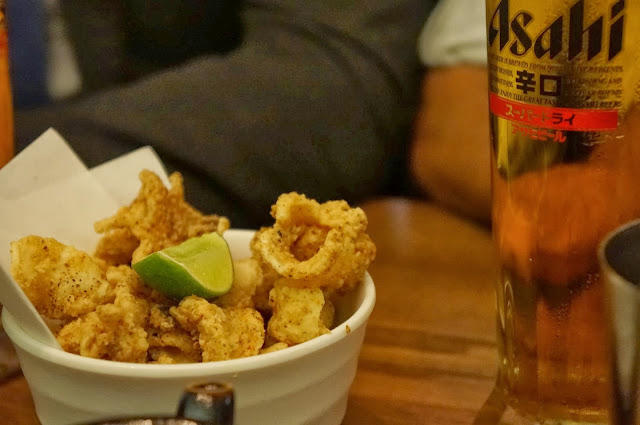 These were hard as opposed to crispy, you know, the kind of rigidity that grazes the roof of one's mouth with an offensive mouthfeel. And there was a lot more batter than squid - When you're charging £8 a pop, at least let me taste the freaking squid! It was just bits and bobs of over-seasoned frozen rubber from a deep fryer. 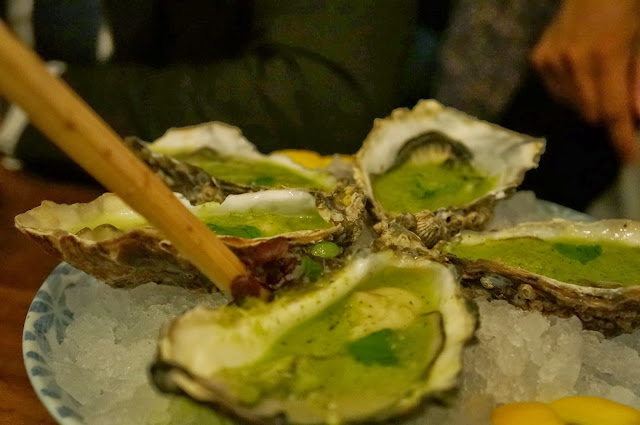 The oysters may look like they are swimming in their own sea sick, but trust, these were the best of the evening. There was nothing jalapeno about the dressing, instead it was refreshing with a healthy dose of coriander, which complimented the minerality of the slightly creamy sac from the oyster and its gently crunchy edge. 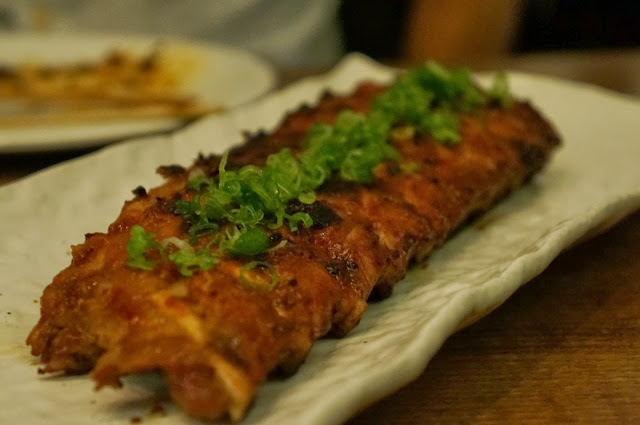 It's ribs. Um... this wasn't particularly memorable but I do recall the ribs being tender and flavoursome. Not to the point that the meat fell off the bone, just that I managed fine with chopsticks. 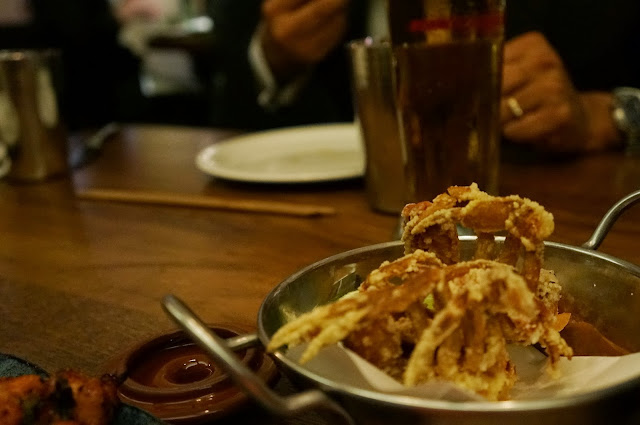 The batter for the softshell crab was better than the squid, a bit greasy, but better. It did feel like I was just eating batter though... again at £9, it's not unreasonable to have higher expectations. 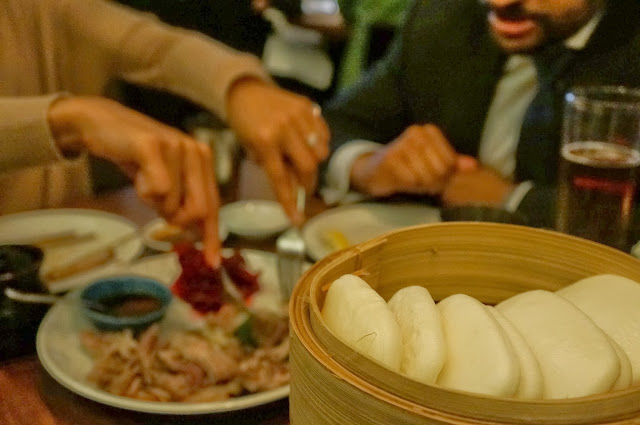 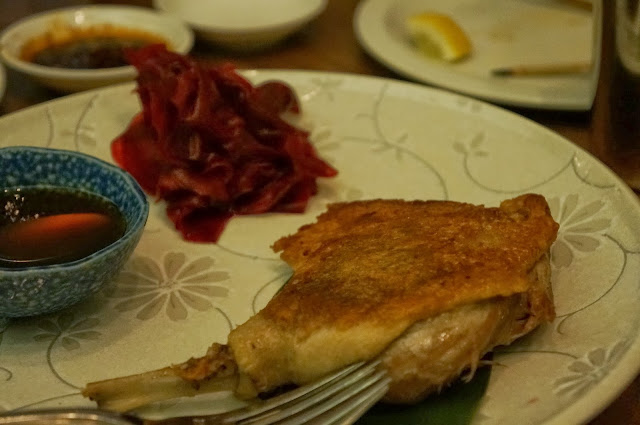 They ran out of piglet belly! Sigh... disappointment does not even begin to describe how I felt... instincts said duck would be the next best thing.

First of all, the buns. The buns were generally good; arrived steaming hot, feathery fluffily soft and pillowy. Great when they were fresh and hot. But as the buns cool, they became more moist and denser with a slightly plasticky exterior. I only noticed because we were served all 3 servings of buns with the duck. The other two mains followed about 10mins later.

The duck, well the photo says it all really, unappetising. Sauce was weak too, a more viscous sauce would have held better in the bun. Although a bowl of leaves and some pickles were served to add some crunch, the whole thing was still pretty flat. Maybe I was after some crushed nuts and chopped spring onion to add more dimension... 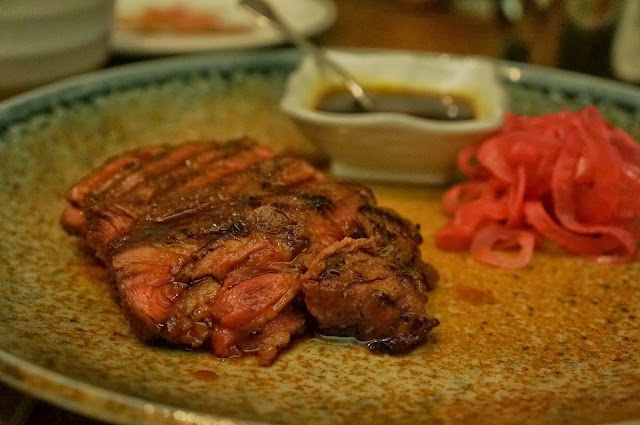 Grilled to a medium rare, as requested - It was a great piece of beef on its own. When it went in the cold bun, though, together with the diluted bbq sauce and the overly sour pickles. the meat lost its magic. Perhaps the acidity killed the meaty flavours, or the texture of medium rare steak clashed with the cooled bun, I can't put a finger on it, but it felt as if the combination ruined a good steak.

Why don't they have slow-cooked meat on the menu? Braised ox cheek / brisket and pulled pork would be wonderful with these buns... 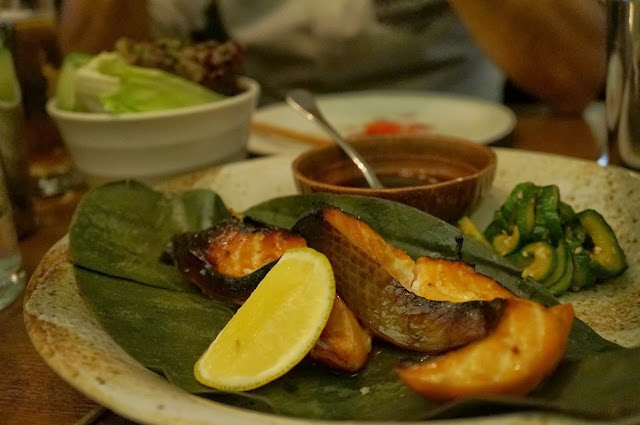 This could be one of the more unpalatable things I have ever eaten in a restaurant. The salmon was severely overcooked to a dry, mushy texture, amplifying its tin food-like fishiness in flavour. Regardless of the amount of sugary, watery teriyaki sauce one drowns the cold piece of fish, it was still very much a cold cat-food sandwich. Downright unpleasant. 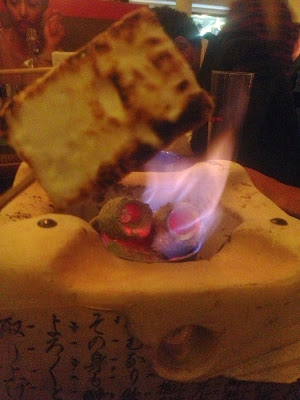 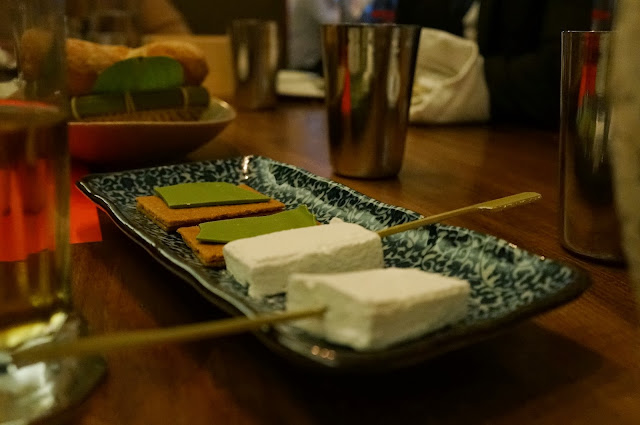 One of the most talked about dessert in town. The massive clay pot of fire created great theatricals. As instructed, I slowly roasted my slab of marshmallows over the fire for a few minutes, then sandwiched it between the two biscuit thins with the sheet of green tea chocolate melting away in the middle.

The gooey centre, velvety chocolate and brittle biscuits work beautifully together. It was, however, insanely sweet, even by my standard.  Good fun nevertheless.

Kinako Donut black sugar custard
The donut didn't have the fun factor, but I preferred it to the S'More. The plump ball was airy with a crispy shell, oozing aromatic custard filling with vanilla seeds. Simply nice.


Quite a few things didn't click with me at Flesh & Buns. The most obvious is that the prices are leaning on the extortionate side. Yum Buns on Old Street offers 2 buns for £6.50, with 50% bigger buns. fresh off the steamer, stuffed with various fillings; F&B is charging 3 times the price, not to mention the £2.50 extra buns, plus service. Yes I know this is a restaurant and blah blah blah, but hey, hirata buns are street food. Period. There is nothing gourmet or premium in the ingredients either.

More importantly, the quality of food is sub-par. When the highlight of the evening was the one item that does not require cooking, it says a lot about the kitchen. I won't repeat what I have already written above, but in summary, a lazy, thoughtless menu executed by a sloppy kitchen with average quality ingredients, made only presentable with a lot of gimmicks.

On a positive note, the lycee and pomegranate martini was lovely.