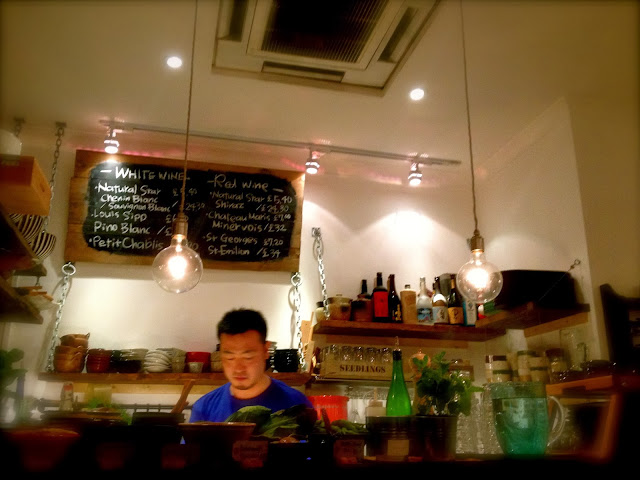 I think it’s fair to say Kirazu opened its doors almost secretively. Despite taking a spot in Soho next to Spuntino, there was no grand opening or fussy PR for the inconspicuous restaurant. I had walked past it without so much of a second glance, and wouldn’t have looked into it had LucyL not made a special mention.

To say Kirazu is small may be an understatement; it’s miniscule, made even more cramped by the table arrangements: two long communal tables. So one gets the choice of either interrupting other diners to squeeze oneself through by flattening oneself against the wall, on which hangs diners’ coats and jackets; alternatively one sits on the aisle side and tolerate the ever-so-apologetic staff that pokes / elbows / prods one’s back throughout dinner. Tough call really. Once seated one becomes even more aware of the discomfort, I couldn’t pinpoint if it was the splinter-laden table with a wonky surface, or the inconvenient bench hidden under the table to ensure there is no leg room. Apart from that, the décor and ambiance is very warm and cosy, countryside shabby chic style.

Japanese tapas is only “tapas” in the sense that all dishes are very small and that diners are encouraged order multiple dishes to share. For this reason the menu is surprisingly diverse for such a compact operation. We went for a good mix of everything. 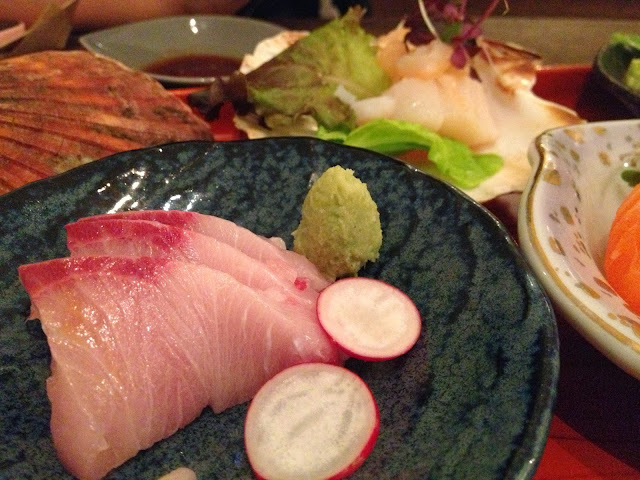 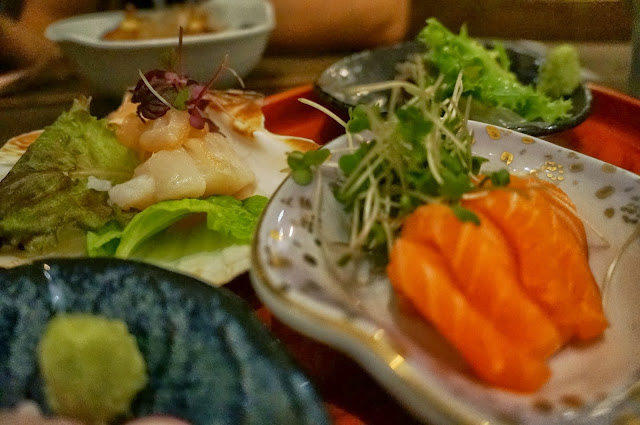 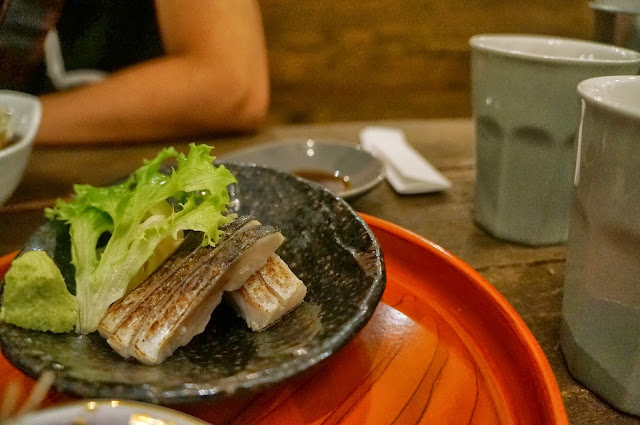 We started off with some sashimi specials written on the blackboard, (which the lady-owner convenient sat in front of throughout the dining service).  4 slices of yellowtail and salmon each, both were top-quality fish serve at optimal temperature, just cool enough to bring out its freshness but not straight-out-of-fridge to kill the delicate flavours. Mama Chan never rated yellowtail, but these were so beautifully rich and creamy with that melt-in-mouth texture that even she asked for seconds. The salmon was equally impressive, pumped with fishy fattiness.

Mackerel sashimi were gently blow-torched on the top for a touch of charred smokiness that balanced the acidity from the pickle juice. Strong and fishy, but not without finesse. The scallop was diced into 4 cubes, as soft and as sweet as expected, just not as noteworthy as the others. 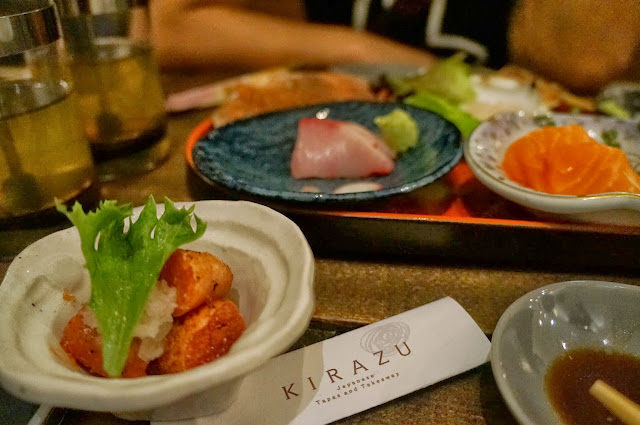 This was… interesting. The actual roe had very little taste but the hundreds-and-thousands had a great mouthfeel that quickly disintegrated into their individual grains. The grilling on charcoal added some bitterness to the spicy seasoning, and while I can’t say it was delicious, the small lumps of roe were very moreish. 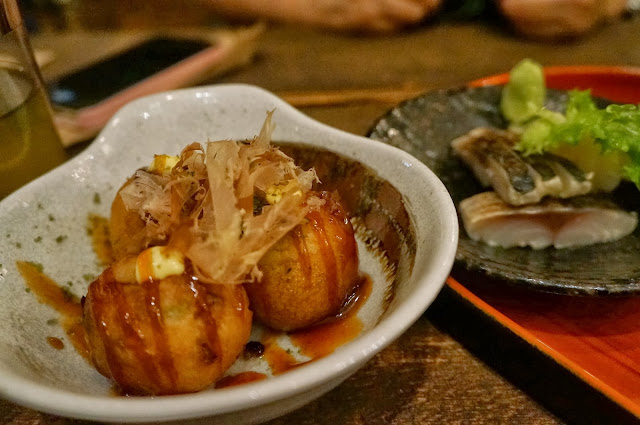 These octopus balls were exactly how everyone else has described; dancing bonito flakes, generous Japanese mayo and tangy teriyaki sauce, all on top of the tongue-burning balls. The doughy filling was perfectly gooey and smooth with a small cube of octopus, perhaps better than half-hearted attempts at random food stalls around town, but honestly, the combination of these are pretty fool-proof. While these were good, I can’t say they were miles better than what we normally get here. 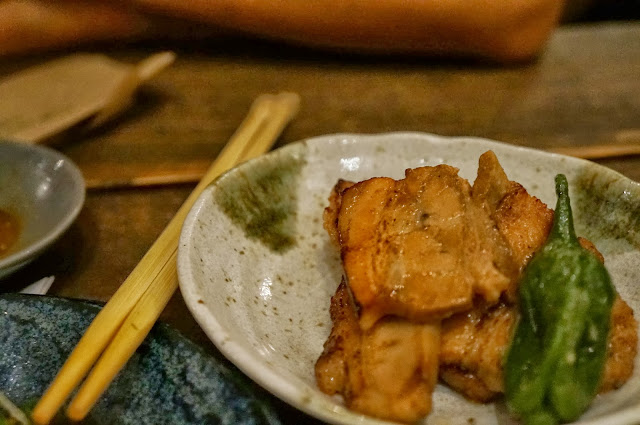 The 4.5 slices of pork was quite tender with crunchy rinds of lard, subtly flavoured with sweet miso. Again good, but I have had more tender grilled pork. 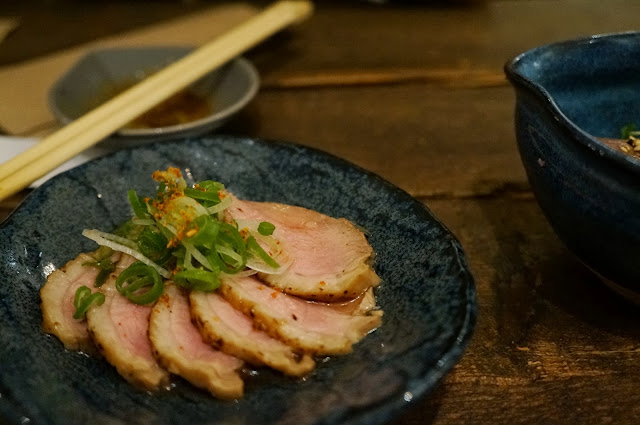 The thinly sliced meat was cooked to beautiful medium pinkness with a modest line of duck fat, served with a diluted ponzu sauce that carried a mild citrusy tang. I thought it was a carefully balanced and executed little dish, but oddly enough Mama Chan thought it was quite ordinary. 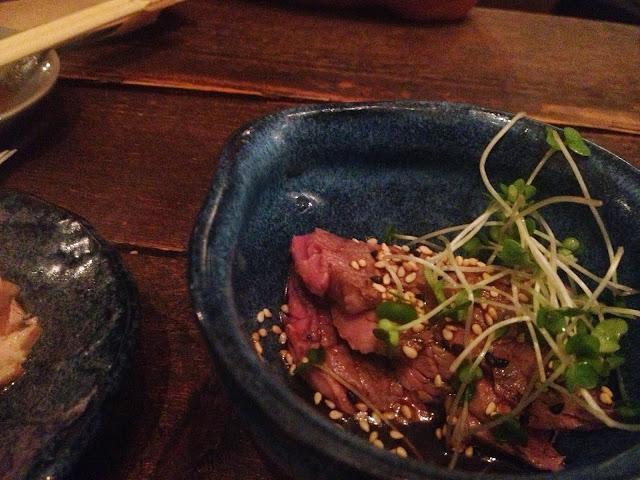 The strips of beef were cooked to medium with a deep pink hue in the centre, served in a soy-based sauce with a strong chilli kick. In my humble opinion, this could have and would have been a very palatable little dish had it been warm. The deliberate coldness had subdued the flavours from the meat and highlighted the grainy textures. 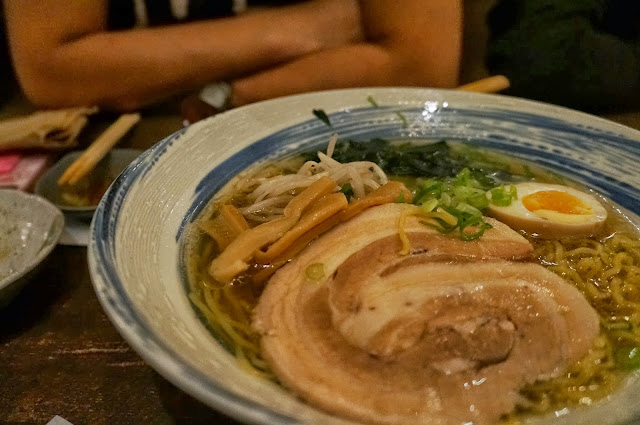 I haven’t had that many salt-based broth ramen, because given the choice I had always gone for miso or soy or pork bones. This was a nice change of scenery from the various thick milky tonkotsu all over town; the soup was clear and packed with all the essence from a savoury chicken stock. Ramen here uses the eggy curly noodles, like the ones in Ittenbari. The noodles were perfectly al-dented, giving them the chew and bounce they deserve; I only wish it carried more kansui (alkali mineral water). The topping was equally impressive with a generous slab of chashu, wonderfully tender with a thick rind of lard.

I must admit it did get a tad too salty as I hit the half-way mark, not intolerable that I was gulping water, but I wasn’t yearning to slurp all the broth like I usually would.

Despite my rant about its setting, I liked Kirazu. The food, especially the sashimi plates, shows off chef’s immaculate skills and dedication to delivering perfection. The dishes, while simple, were sophisticated with great attention to the details that matter. Chef’s careful thoughts and loving preparation all evidently transpire into these little dishes.

Kirazu is doing something very different to the trend, it’s almost at the stage of proving a concept. I admire what Chef Yuya has set out to achieve, but believe there is still some mileage - more in terms of its operations than fine-tuning his recipes. Nonetheless I plan to return as a regular diner, perhaps try to hog one of the window bar seats.

You may also like: Tonkotsu, Shoryu, Yashin, The Shiori
at 14:11