One Canada Square – More for Penguins 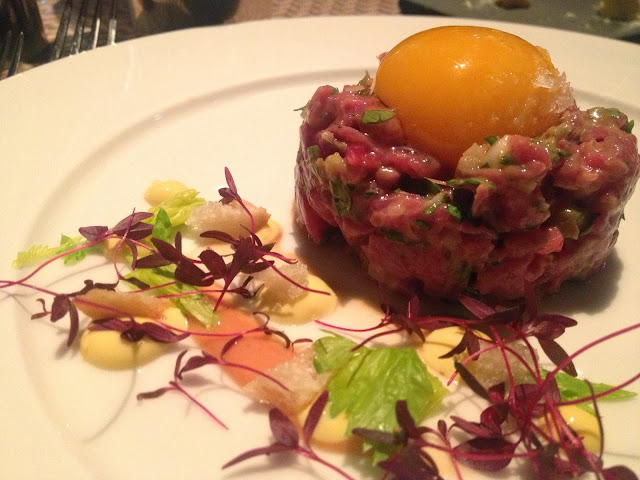 There is no need for good restaurants in Canary Wharf really, no food enthusiast would come all the way to one of the most soulless parts of the city for something they could find even better elsewhere. So despite Tom Aiken setting up shop and Goodman branching out here, nobody cared. One Canada Square caught my eye though, mainly because it’s in the lobby of where I am working at the moment, but also because the kitchen is headed by an ex-Ivy chef.

Apparently the restaurant has taken up 5000 square feet of the lobby – it must be a freaking massive kitchen. Ana and I were led through the after-work crowd at the bar to a modest dining room. David Collins studio might have done great work at Zedel and The Wolseley to create the ambience of classic grandeur, not here though – still very aware that I was sitting at a corner of an office lobby.

Wine list on an IPad. My view is that I have survived 20 odd years of reading a wine list on printed pages, where I do not need to scroll frantically to compare tasting notes between bottles. In case it’s not obvious, images of the bottles do not help me choosing my wine. I would not, and do not, pick the prettiest looking bottle. And of course they didn’t have one IPad for each table, which is why our server kept hurrying us for a decision. Unless I am ordering straight from the tablet, in that case spare me the 12.5% service, save the technology for your internal operations.

Anyway, rant over. Our bread bucket was served with two types of butter. I thought the one with chopped spring onions and a tinkle of orange twang was quite special. 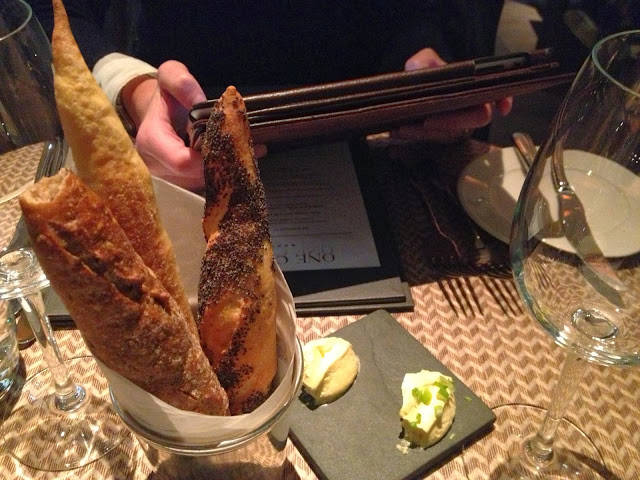 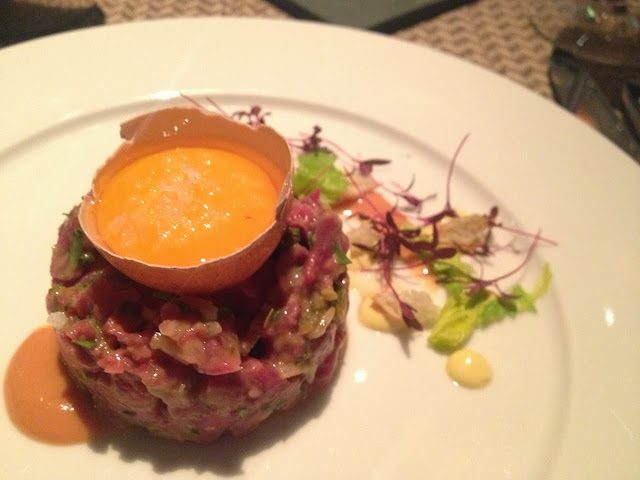 You see, it’s never predictable with Ana. After her disappointment with the steak tartare being removed from the menu at Hoi-Polloi in the Ace Hotel, I called to make sure it was on the menu before meeting up. And guess what, she went for something else. I’ll have it then.

I’m often wary of egg shells touching my food. We all know where eggs come from and we have all seen the odd brown smear every now and then on the shells we buy from the shops… I could only assume the kitchen had thorough washed and scrubbed the shell before placing it on my raw beef. Shudder.

It was a good tartare. The roughly chopped ruby beef was smooth with some chew and well-seasoned with measured acidity. Compared to the luxurious version at Brasserie Chavot, this one still has some mileage to go; the beef was not as gamey, flavours not as balanced, yolk not as fragrant… that said, this will do. 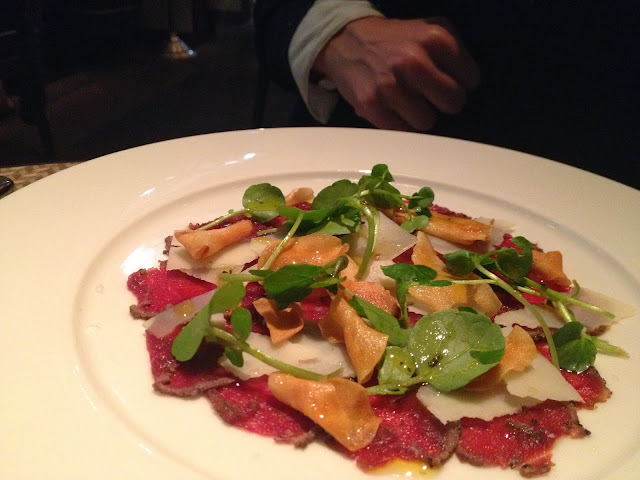 The sheets of venison were very meek in flavours despite the sealed edges; it lacked the gamey notes and bloody rawness. While the velvety textures drew out the nutty aroma of parmesan, the smoothness was somewhat spoilt by the harsh crisp from the artichoke. The deep fried vegetable was glistening in its oils, which meant the delicate succulence was replaced by a mouthful of unpleasant grease. I wasn’t sure about the combination of rosemary and truffle either, the two dominating essences had a clash and was thrown off-balance. Quite chaotic. 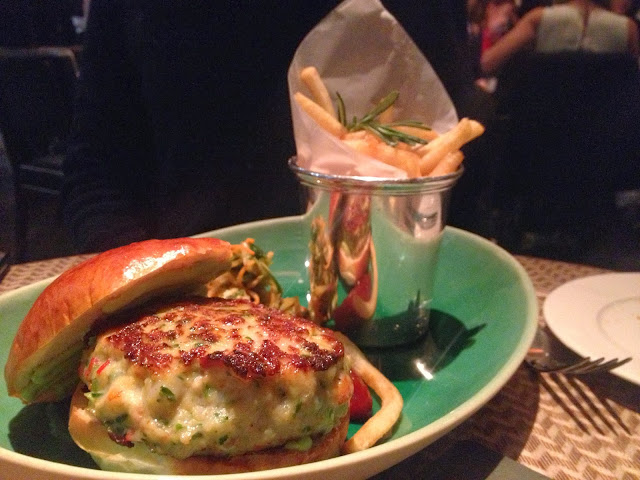 You know when you see something on the menu and you brain goes “Oh dear…” Then your dining partner orders it “Sh*t…” And your dining partner happens to be Ana “The crisis begins…” I mean, I know we are living in an era where burger patties are made with super high quality beef from little cows with name tags, but what exactly is one trying to achieve by mashing up perfectly good bouncy scallops and shaping them into a patty?

Shrimp burgers, or more often prawn cakes, I can understand, because the chopped prawns turn into a thick gelatinous paste with a playful, springy texture. But this mammoth of patty was dense with too much flour, and more annoyingly masked the delicate sweetness of scallops and whatever shellfish hiding in there. Not to mention its unappetizing ugliness. Clashed like a car crash with the lanky bun, lack of accompaniments and obstinate pile ‘kimchee’.

Umm… she ate some fries. 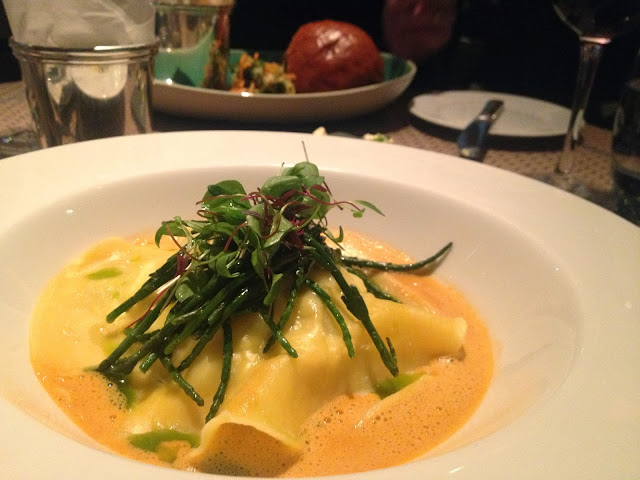 So I had the Medlar’s crab raviolo in mind when I ordered this. The top sheet of pasta was just marginally undercooked and it had dried out to leave a slightly plasticky mouthfeel, but all okay when soaked in the frothy broth. It was excitingly packed with heaps of shredded crab meat, which was unfortunately lacking moistness; it didn’t have the sweet shellfish juice that holds the meat together. The sauce wasn’t concentrated enough to bring the flavours back either, and all in all a very disappointingly bland dish.

One would have thought being next to Billingsgate, One Canada Square would nail the seafood / fish section with minimum effort. Sadly it felt as though the kitchen doesn’t really know what to do with it, hence the half-hearted effort and poor execution throughout. The entire restaurant was awkward; located at an obscure corner of an office tower lobby, waiting staff with a quizzical smirk when they couldn’t remember which wine you ordered, managers that avoided any kind of eye contact, and finally a crowd that didn’t visit for the food. Enough said.

The bill came to £90 for two - 2 courses with a glass of wine and coffee each – including a 30% off introductory offer. I could eat so much better with that price tag.

You may also like: Tramshed, Iberica Canary Wharf, Beagle
at 06:15 4 comments: 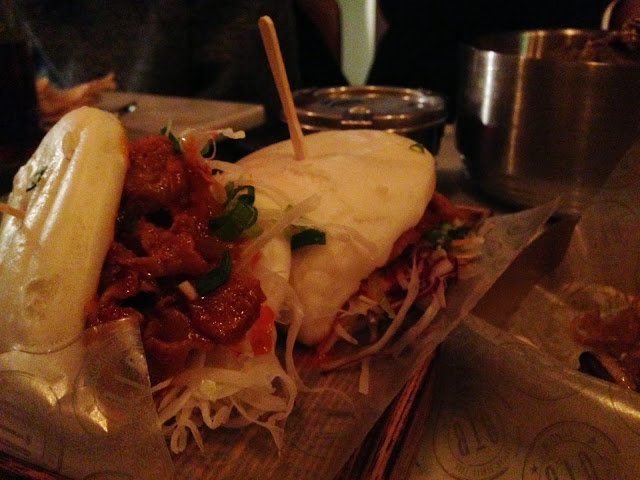 Shoreditch is dominated by Vietnamese restaurants in terms of Asian cuisine, but Korean is slowly but surely getting their claws into the area. Jubo launched its first restaurant in The Bedroom Bar a few months ago, and now On the Bab has picked a less discrete spot near Hoxton Square on Old Street.

On the Bab sells Korean Street food. The cute little restaurant sits less than 30 and tables are quite close together with about 6 bar seats. Mister and I made it to their soft launch, which meant we got 50% off the entire food bill. It also meant we had to queue for 20mins before we were seated, and that we were entitled to go crazy with the ordering. Luckily portions were quite small so it was great for sharing and trying different things. 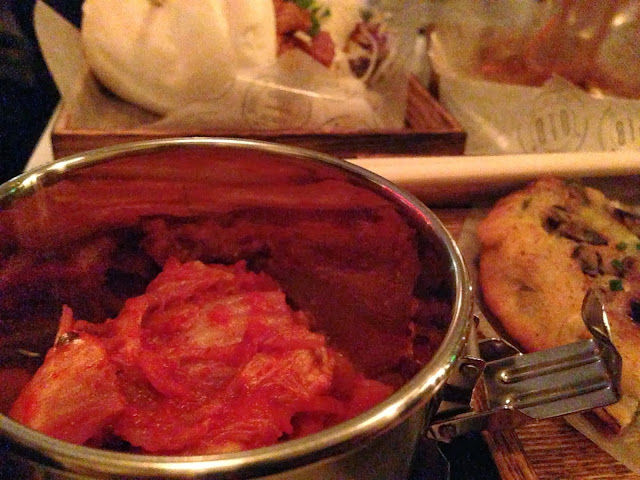 Kimchi is one of those foods that grow on people. It really grew on me when I began surviving on it in my uni days. There is something moreish about the slightly spicy preserved vegetables that had soaked up all the tangy juices but retaining that crunch. At £2 a pop it’s leaning on the expensive side, considering it’s very much supermarket stuff and some restaurants serve them for free. 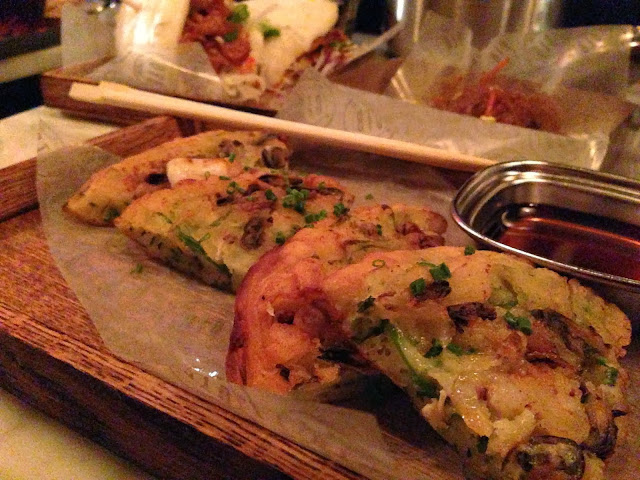 Another typical Korean dish, but also one that is rarely done well – too much batter, too little seasoning. I can’t say On the Bab does it particularly well either; there wasn’t enough seafood to give it the chew and flavours, even with the watery soy-based dip. On the plus side, the textures of the pancake was great, crispy and delicate on the outside, soft and doughy on the inside.  Should have gone for the kimchi pancake though. 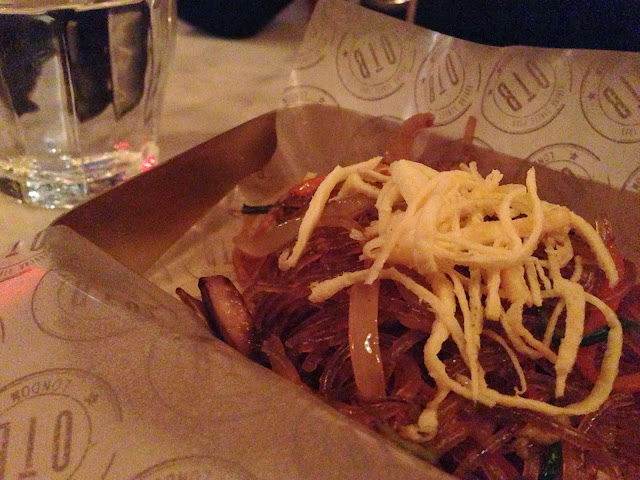 I am a massive of Korean vermicelli, being a tad thicker and a tad bouncier than the usual ones. These were well-made, al dante with a touch of sesame oil mixed with thinly sliced veg. The mouthfeel was spot on, but the portion was tiny and it would have been even better with sweetened eggs. 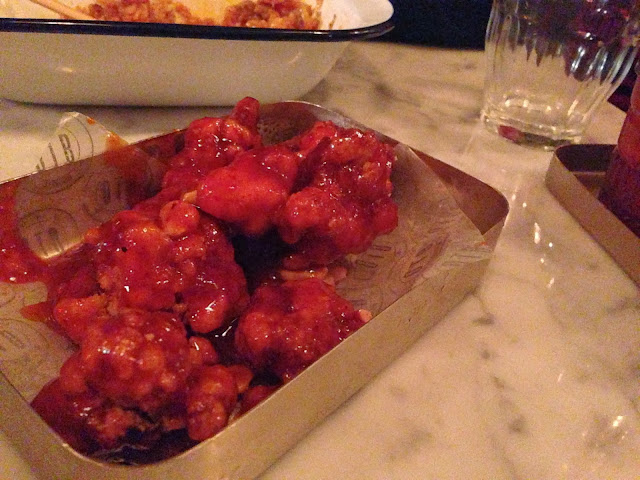 The chicken retained its ultra crispiness despite the blanket of more-sweet-than-spicy sauce. The pieces of chicken thigh were freshly fried, and the viscous glaze clung well onto the brittle shell. It reminded me of the buttermilk fried chicken at Upstairs @ Ten Bells, but better. The peanuts, however, were just halved and half-heartedly sprinkled on the chicken, not crushed and roasted to bring out the aroma.

On the Buns – spicy pork

These were possibly the highlights of the evening. Like Yum Bun, the fluffy steamed buns were amply stuffed with thin slices of pork belly, plenty of fresh crunchy veg and a generous squirt of that delicious sweet and spicy sauce. The simple fussless combination was a winner, and I have no doubt the bulgogi beef version was just as good.

This was going for 6.50 without the discount, which just re-iterates how ridiculous Flesh & Buns is charging for a sub-standard equivalent. 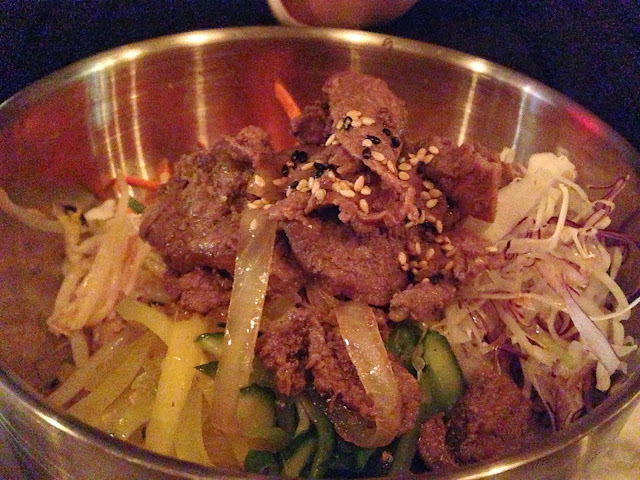 And the visit wouldn’t be right without checking out their bibimbap. Personally I prefer the dolsot bibimbap with the rice served in a hot stone pot with raw beef and sesame oil, but barbeque strips of beef in a metallic bowl would do too. It’s pretty standard stuff here, except it is missing the raw egg yolk! Roar. That’s like having a hot dog without onions, a burger without cheese or eggs benedict without the hollandaise sauce! Not right. 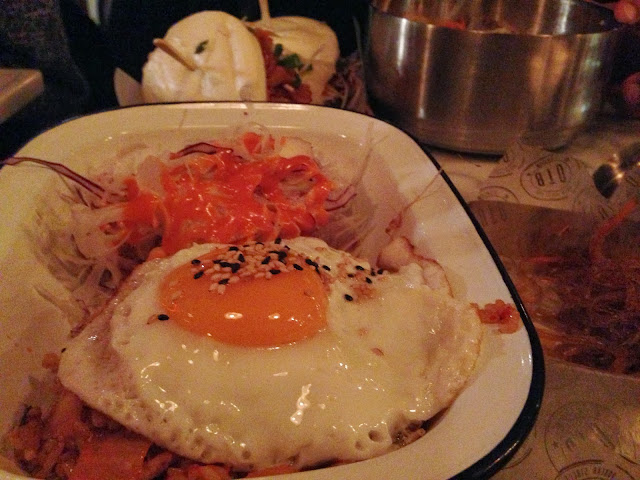 This was another winner. Paella was merely referring to mixed fried rice with the chili pepper paste, which was moist and tasty on its own. Then Mister broke the egg to mix the yolk with the rice, which really lifted the rice with the subtle heat and made it even more delicious.

I don’t think On the Bab serves the best Korean in town, but on the street food front, it hits the spot. Some dishes could have been better in terms of seasoning, but it’s no worse than some of the more acclaimed Korean restaurants in Central London. With the 50% discount we ended up with a £25 bill, that’s 3 small dishes and 3 mains for 2 people – I think it was just right for a very hungry couple that had a pretty darn stressful day. I’d come back for more without the discount.

You may also like: Kimchee, Hoi-Polloi, Song Que
at 02:42 No comments: