Bobby Chinn, host of World Cafe Asia and Saturday Kitchen, took over from Med Kitchen in Soho to open his House of Ho, where he serves up fun, informal and sexy Vietnamese food.

Lee and I visited during its soft launch, when Bobby himself was in the house to greet his guests, sat down with a glass of wine to share some of his stories. The man was most charming. We were looked after by Warren; he explained that the cocktails were all designed and tailored for a Viet twist. So we kicked off with a Ho'rny Devil each, a gorgeous lemongrass concoction that was beautifully dusted with coconut, followed by a Rosy-Lycheek Martini, a tad too strong for my liking, and finally a Hanoi Martini, a sweet coffee martini with the faintest trace of liqueur. 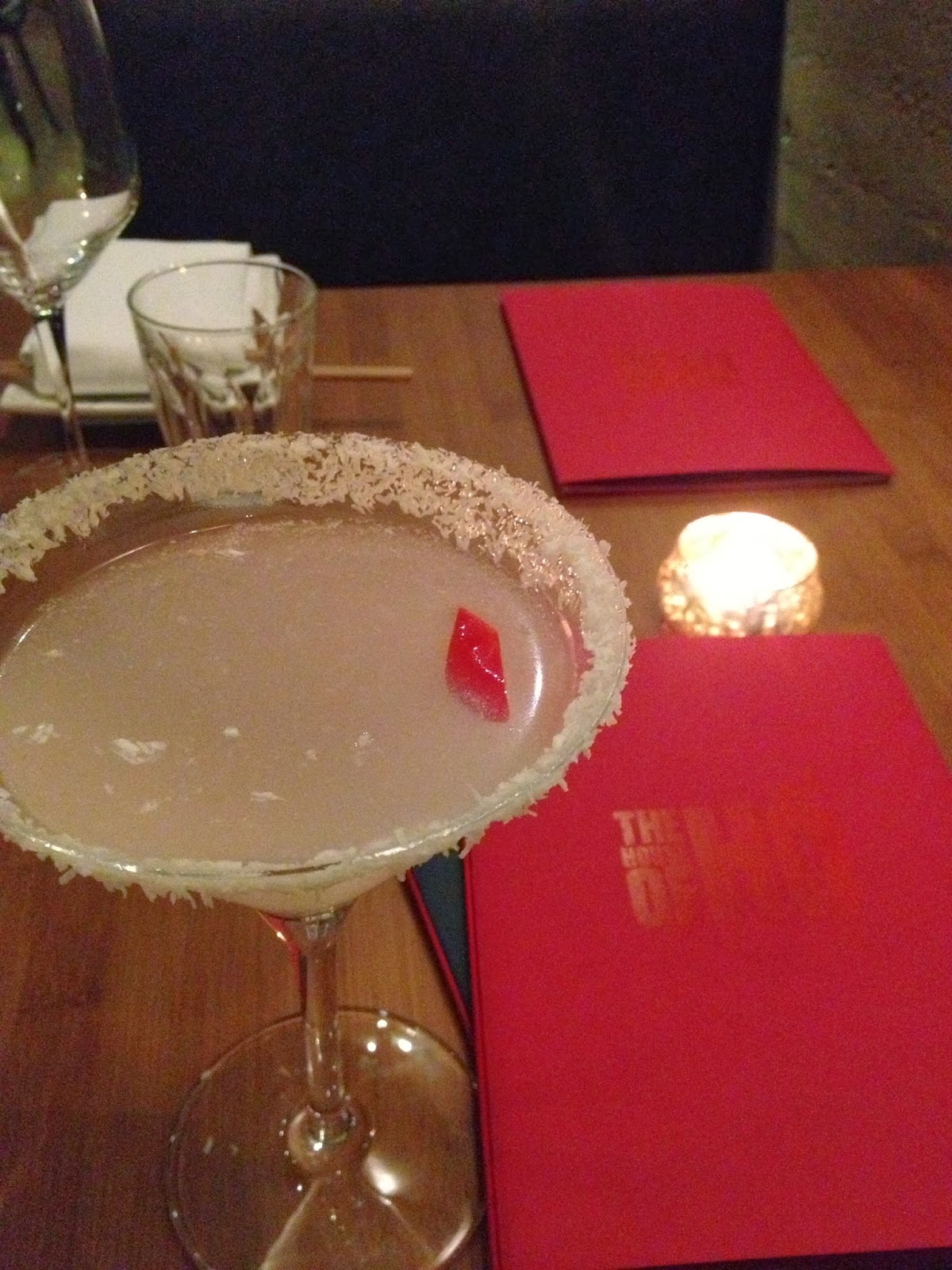 Exquisitely presented with an open coconut.

The diced seafood mixture retained their bouncy texture and succulence. I couldn't quite pick out the mangosteen in the mixture, but the tangy, citrusy sweetness in the dressing made the dish refreshing without drowning the delicate flavours of the seafood. The truffle oil was barely noticeable too, but that was probably a good thing. An appetising start.

BBQ Baby Back Ribs on a Light Asian Slaw 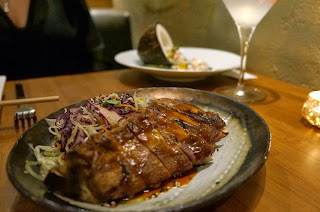 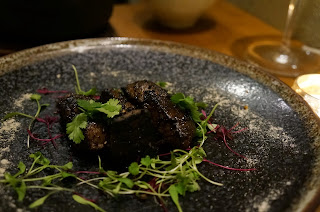 This was magnificent, small, but magnificent. The 5 cubes of beef were covered in powder of char, giving an intense smoky and bitter taste when it first hits the senses. The bitterness quickly disappeared as the beef juice was released from the tender cubes of fillet, together with the peppery bite and the savoury watercress dressing. The beef was meticulously cooked to medium rare with a deep crimson centre; the knife sliced through it with little resistance.

I have never been to the Slanted Door in San Fran, but if this Shaking Beef is anything to go by, it's going on my Eat List. 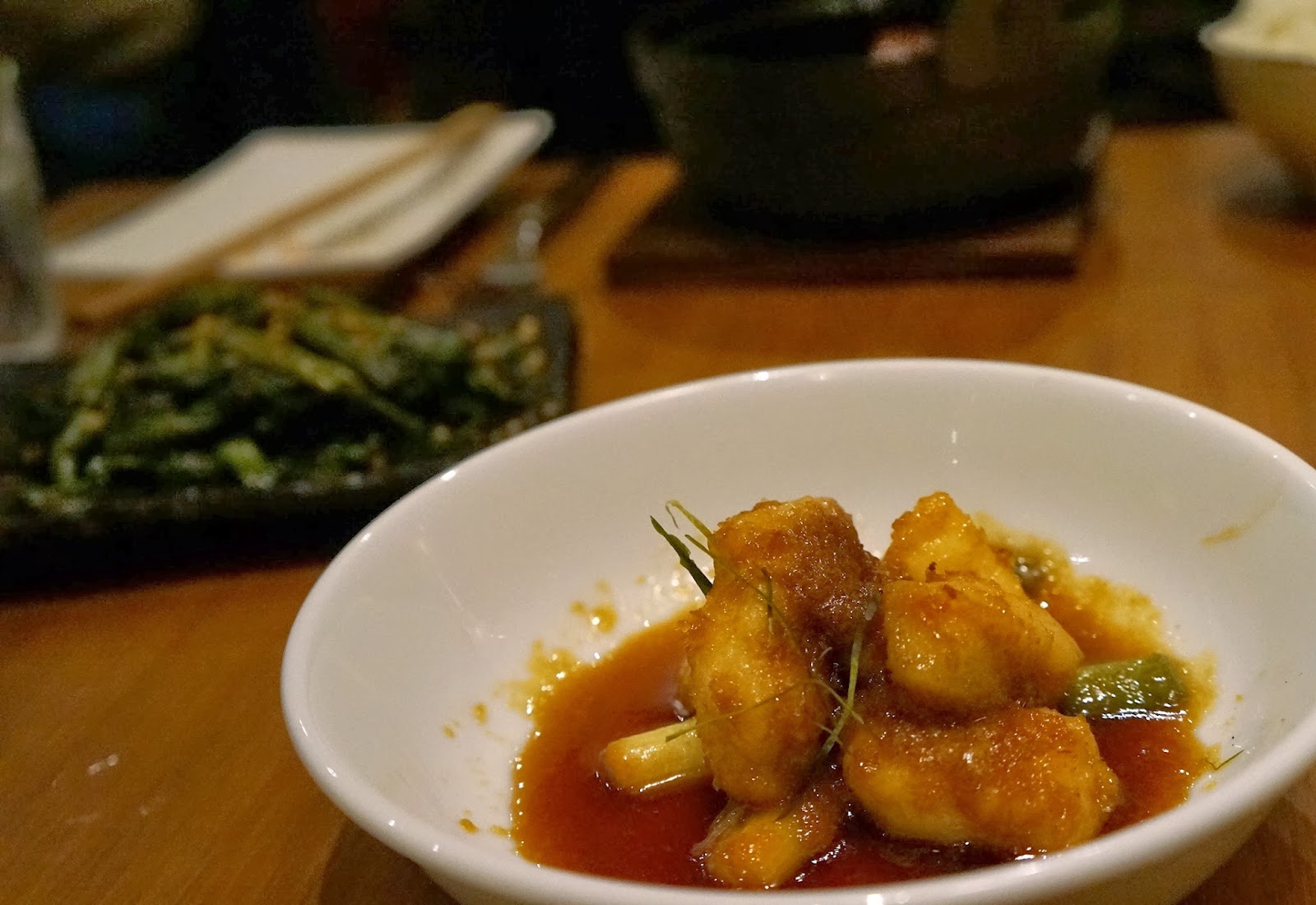 Monkfish is usually too firm for my liking, but these were surprisingly soft and slithery, yet still sturdier than cod. The caramel glaze, however, was probably too sugary; the sweetness dominated the dish and overpowered the subtle lemongrass aroma. It could do with a bit more control and reining in to add more dimension. 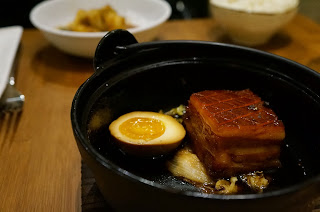 This small block of pork belly was scrumptious; the interweaving layers of lard melted instantly in mouth to release its piggy goodness; the lean meats slowcooked to disintegrate into shreds with minimum pressure, holding and soaking up the dissolved grease. The scored pork skin was squidgy and springy, which was an interesting contrast to the tender muscles underneath.

The smoked egg with its viscous yolk was delicious, and the braised cabbage absorbed the sweet glaze, completing this little pot of wholesomeness.

We had a side of Morning Glory, stir fried with crispy garlic. Interestingly our side order turned out to be the largest portion on the table - crunchy and well seasoned. 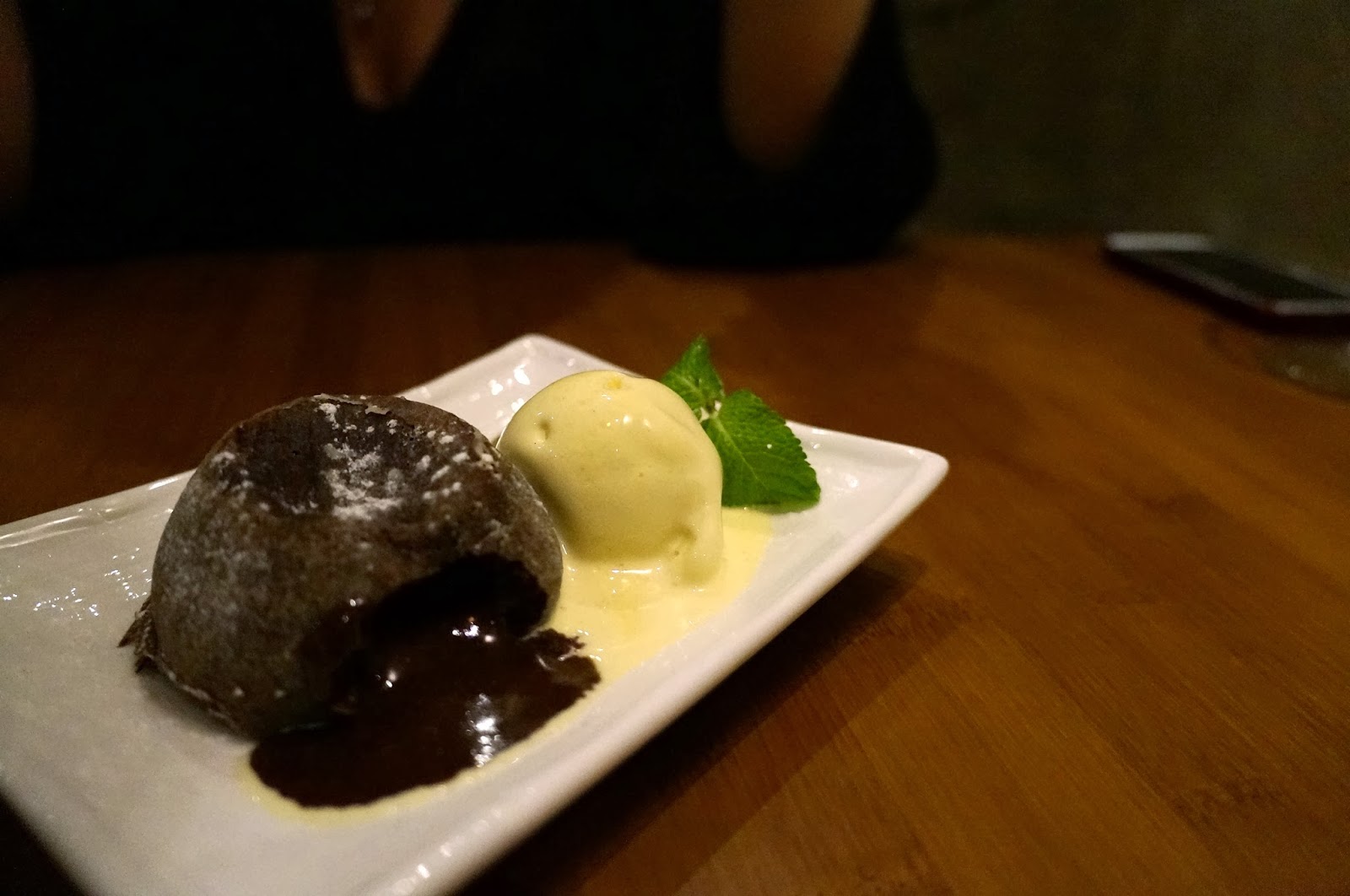 The chocolate fondant was warm, gooey and indulgent - a great finish to our evening.

I really enjoyed House of Ho. Just like how Bobby put it, the dishes had a "Bobby twist" to them to make Vietnamese food that much sexier. Flavours were thoughtfully designed in the dishes to keep them modern and light; meats were particularly brilliant. The portions are small, though, which is great for sampling more from the menu, but it also means the bill stacks up quickly.